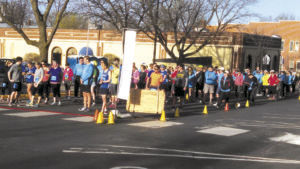 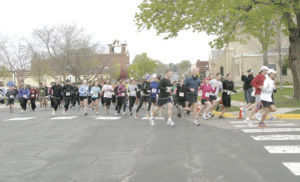 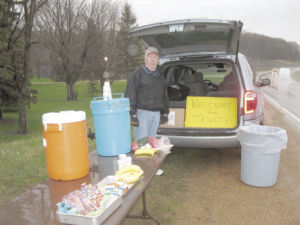 Residents of Waconia are familiar with the scenic lake with shores that border the downtown area, but with the hustle and bustle of daily life, taking in the full splendor of the lakeshore that seems to jump right out of a postcard mostly falls by the wayside.

“There is so much beauty around the lake that people don’t get to see,” said Tim Litfin.

Litfin, a resident of Waconia, has often trekked around the shores of Lake Waconia and wants to share the picturesque scene with others. An avid runner, Litfin decided in 2006 to start Walk on Waconia, a charitable event that sends walkers and runners out on a spring morning to see the sights around the lake.

The April event started as a walk around Lake Waconia, beginning and ending at St. Joseph Catholic Church in Waconia. It has since grown to include a 10K Walk/Run and a 10-mile Walk/Run. Participants can choose to walk at their own pace or run the course. Litfin said the event is a great chance for runners to safely jog around the lake, or a nice time for groups of friends to get together and enjoy a day walking around Lake Waconia.

Liftin said a good portion of participants walk the course with a warm cup of coffee and spend the day carrying on conversations with other participants while the cellphones stay tucked away.

“You get small groups that chat about everything under the sun,” Litfin said.

Not only is the Walk on Waconia a great chance to get outside and enjoy nature, it also is a good opportunity to give back to the community. All proceeds from the event go to the Waconia United Food Shelf. The event typically raises between $5,000 and $7,500, and the walk has always dedicated 100 percent of the funds to the food shelf, a charity that Litfin says is important to the community.

“It could be my neighbor or your neighbor in need, and the need is only growing,” he said.

Because the walk is administered completely by volunteers, all the money raised goes to the Waconia United Food Shelf. Another benefit of the volunteer effort is the enthusiasm. Litfin said the spirit of the event is definitely raised by the people who help with the event.

“It spreads the energy,” he said.

The energy is high and never waivers, even in the face of the unpredictable nature of April in Minnesota. Whether it is rain or snow, the smiles never dim.

“Five out of the first eight years it rained or snowed,” Litfin said. “But it didn’t change participation one bit.”

The Walk on Waconia has been at the mercy of the weather often, including a shortening of the course courtesy of a heavy snowstorm, but the event always goes on. Rain or shine, hundreds descend upon the shores of Lake Waconia every year to raise thousands of dollars for the food shelf.

In addition to raising money for charity and being an opportunity to enjoy the lakeshore, Walk on Waconia also presents a chance to get out and exercise. While there are quite a few events that take advantage of the shores of Lake Waconia, most are for experienced runners. While Walk on Waconia offers a 10K run and a 10-mile run, most of the participants walk the course, giving them a chance to enjoy the lake at their own pace. Whether someone is running the course or walking it, they are out getting exercise they might not normally get.

“They come back feeling great about themselves and they should,” Litfin said.

For runners, there are three age divisions - 39 and under, 40-55 and 56 and over. The top three males and top three females in each event earn medals.

Whether you walk or run, a day on the shores of Lake Waconia will be a great experience Litfin said.

“When you see it from another perspective, you see how pretty it is and how lucky we are to be here,” he said.

There are four rest stops along the way. Each rest stop offers water, Gatorade and snacks. There are also four port-a-potties along the route.