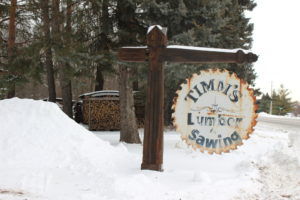 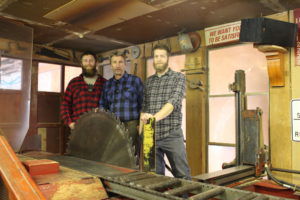 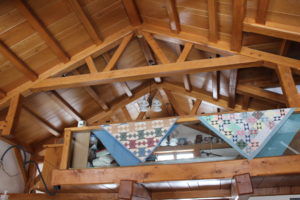 On a cozy ridge just southwest of Maple Plain, a vision is taking root.

Wood smoke rises from the chimney of a spacious log home, and evergreen trees tower over the land, sending their fragrance through the air. The only hint to passersby that this is a sawmill is the sign in the shape of a saw perched beside the driveway.

It’s here that one man built a legacy with his four sons, creating Timm’s Lumber & Sawing.

Steve Timm was working in the commercial construction industry in the 1980s, when he decided to start his own business. He began by sawing during the evenings and weekends, cutting enormous logs from choice trees into custom shapes for local woodworkers. It wasn’t long before he decided to leave the day job behind and focus on woodwork himself.

Now, Timm’s Lumber & Sawing offers everything from sawmill work, to custom furniture and matchbook tables, to counters and flooring, to mantels and timber framing. On any given day, customers can also get custom wooden coasters, cutting boards, and other trinkets – all made by hand right in the shop.

Married to Peg Timm, Steve is the father of four strapping boys. There’s Jacob, Matt, Jeff and Joe, and they range in ages from 18 to 29. They’ve all contributed to the vision for the sawmill.

“We all have our hand in something,” said Jeff.

Jeff grew up knowing that he would go into work with his father. Joe didn’t join the team until last summer, when the amount of work coming in required more labor. The youngest son still has time to consider his future, but even Matt has offered his talents in the graphic arts to help build the brand, film videos and design the sawmill website.

Jeff and Joe are both on staff with their father, Steve, and they lent their own talents to making the family business a success. So has their grandfather, Russ – Steve’s dad – who built several inventions that can be found sitting around the woodshop, like saws and planers.

“We built the first sawmill in the early 70s,” said Steve. “The one that’s here now is the second one that my dad built.”

Steve said he moved to the wooded home on County Road 6 in 1979, and he has been adding to the place ever since. With a depth of knowledge in woodworking, he decided to put an addition on the house in 1997, using timber framing. It’s a time-honored method for creating framed structures of timber, held together with a variety of wooden joints.

“Timber framing existed before man had fasteners,” said Joe, as he gave a tour of the sawmill with his brother, Jeff. “It’s still done, especially in Europe, where you see a lot of brick and timber structures.”

Jeff explained that a true timber frame, even today, relies solely on the wood to give a structure its stability. No fasteners, like glue, nails, bolts or screws, are used. Instead, the men work to build pegged mortise and tenon joints, in order to create a frame of wood-on-wood. Because the wood is still green after it’s cut, the boards will dry and shrink over time, creating a structural feature that is not only solid, but attractive.

“When you’re talking timbers, you’re talking in terms of what the Amish did,” said Jeff. “When they did barn raisings with 50 to 100 people, they were using timbers. They put a barn up without machinery, and let the tension on the joints provide the stability.”

Today, most timber framing is decorative, but it’s custom work that adds to the beauty of a home, inside or out. Since the Timms used timber framing to build the addition on Steve’s house many years ago, the requests for this work keep coming in.

One of their most memorable projects they worked on was a house in Locust Hills, where they provided timber framing on both the interior and the exterior.

“That one was unique, in that every room in that house was trimmed in timbers,” said Joe. “That project took a year to complete.”

The Timms worked with architects, carpenters and many other people in the wood industry to make the features in the Locust Hills home a reality. The result was a unique living space with ornate wooden touches that created a luxurious feeling in the home.

“It’s been evolving,” Steve said, as he looked back on nearly 40 years of business. “Anytime you take a piece of wood and do something to it, you’re increasing its value. It becomes something you can take pride in.”

With contacts in the logging industry, the Timms take a unique approach to their work. The sawmill doesn’t have a storefront, where shoppers can come in and select furniture. Instead, they pride themselves on pursuing custom projects from start to finish. While they don’t cut down trees, they start with the raw log and take the wood through a process of sawing, sanding, building and finishing, until it becomes a unique product.

“We take what most people would consider firewood, and we turn it into the centerpiece of a home,” said Joe.

It allows the team to achieve a wide range of results, from the unfinished look of bark on a bench to the careful construction of timber frames.

“It’s all custom,” said Joe. “That’s really what makes us proud to work here, and that’s really the type of work we want to do.”