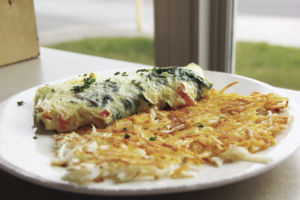 Omelet and hashbrowns at Dakota Junction. (Nicole Brodzik/Scene in the West Metro) 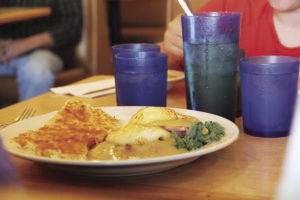 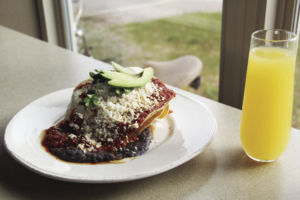 Omelet and hashbrowns at Dakota Junction. (Nicole Brodzik/Scene in the West Metro)

It’s 8:50 a.m. on a Saturday and the doors are about to open. Waitresses and bartenders are setting up their stations and tables to prepare for the morning rush. Televisions are being tuned in to the day’s biggest games. Cooks are prepping in the kitchen, where they’ve been for nearly two and a half hours already.

Dan Zelmer and his crew at Surfside Bar and Grill in Mound are ready for the morning rush of waffle-loving, sports fans that have been visiting the restaurant since it started serving breakfast this summer.

With 15 television screens and projection screens, ask and you’ll recieve any sports game on television, even if they’re out of market. The family-friendly establishment has a full breakfast menu, as well as a specialty waffle menu, created by the owner’s son, Jaxen.

The menu features waffles like “Violet You’re Turning Violet”, a berry waffle named for the movie “Willy Wonka and the Chocolate Factory”, and Fruit Ninja.

“He took it upon himself to put that together,” owner Dan Zelmer said. “It’s been pretty successful.”

Surfside Bar and Grill also has specials and events during Vikings games and with multiple screens featuring everything from kick off to the final whistle, there’s no shortage of viewing space.

For fans of the green and yellow persuasion, Carbone’s Bar, Pizzeria and Grill in Mound is the official Packers’ bar and grill of the west metro. Nominated by fans who came in every week to catch the game, the restaurant now makes sure to play every Packers game, and any other football action customers should want.

Owners Matt and Jeremy Willette started serving breakfast on Labor Day and have been experimenting with the menu ever since.

The brunch menu offers a number of unique items, including an omelette bar, bloody mary bar, breakfast pizzas and flatbread

“You can get eggs, hashbrowns and toast anywhere, most people can do them well on their own at home,” Jeremy Willette said. “When you come out here, you get a really unique menu and you don’t have to do the dishes.”

The co-owner said that while the unique items on their menu really set them apart from other local brunch spots, they make even the most common breakfast items in new and exciting ways.

“My favorite thing is the french toast,” Jeremy Willette said. “We use a batter than has ameretto in it and I feel like a lot of places you go just have the standard egg wash. We use cinnamon, ameretto, heavy cream-- that really give it a lighter texture.”

For people looking for the good, old comfort foods, Scotty B’s is just around the corner and offers just about anything a breakfast lover could ask for.

Scotty B’s on Commerce Boulevard opened in 1989, and has been keeping customers’ face’s smiling and their bellies full ever since.

“We pride ourselves on having consistently good food and really friendly service,” Owner Scott Bjorlin said.

He and his partner Scott Price know the food their restaurant produces is great, because they’re the ones cooking in the kitchen every weekend. With more than 70 years of restaurant experience between them, they’ve got high standards for the meals they put on their tables.

Breakfast starts at 6:30 a.m. on Saturday and Sunday, with cooks coming in to prepare for the morning rush as early as 5:30 a.m. For those who aren’t such early risers, the restaurant serves breakfast all day, so you can still order the eggs benedict at 9:30 at night, or carry out any meny item so you can enjoy breakfast in bed.

Bjorlin estimates he’s cooked over three million eggs in restaurant kitchens, which has given him the time to perfect his craft and one of the reasons he says his favorite breakfast item on the menu is “Scotty’s Favorite.”

Aptly named, the popular breakfast comes with two cooked-to-order eggs over crispy hashbrowns with sauteed onions, green peppers and sausage, topped with cheese or Hollandaise sauce and served with toast.

A new item that’s recently become a hit for patrons is the “Carmel Apple French Toast”, made with fresh baked bread from a local breadsmith, served with bacon and eggs. Bjorlin said they tested the waters by running it as one of their weekend specials, but with so many orders coming to the kitchen whenever it was offered, he knew they needed to offer it full time.

“It became hugely popular,” Bjorlin said. “We do our best to keep up with the changing times and tastes for people. Usually that starts with testing it as a special, and those change every weekend, but if we hear that people really like it, we’ll move it to the full breakfast menu.”

For brunch-goers who are interested in more than just breakfast offerings, Dakota Junction offers a wide variety of both breakfast and lunch items starting at 9 a.m. on Saturday and 9:30 a.m. on Sunday.

That menu changes periodically, but there are some staples that owner Stephanie Bolles said keep bringing customers back.

“The menu changes up to every three weeks and we have different specials all the time, but the Thai Chicken Salad and Chorizo Hash are some of our more popular items,” she said.

Dakota Junction prides itself on the providing wholesome, local meals to customers. A long time patron of Gale Woods Farms in Minnetrista, Bolles knew she wanted to utilize their produce when she opened the restaurant three years ago.

“In the summer, 95 percent of our produce comes from within a two mile radius,” Bolles said, adding that the winter weather in Minnesota means they have to import more produce for the colder months.

A crowd favorite, and a dish the restaurant worked hard to perfect, is their Heuvos Rancheros. Bolles said her husband is half Mexican and the two of them have traveled the world tasting and trying different dishes, but that bar none, the best version she’s ever had is the one the cook up in the Dakota Junction kitchen.

“It’s great, fresh, homemade food,” Bolles said. “Everything we do is local and that’s really important to us and to this community.”