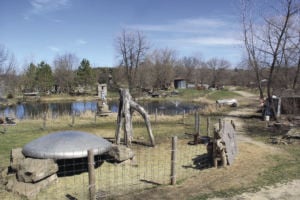 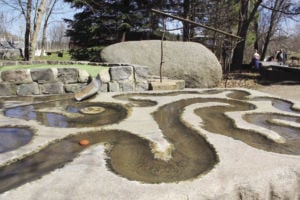 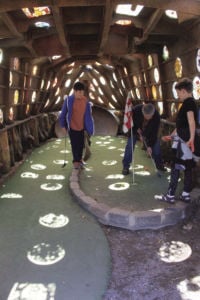 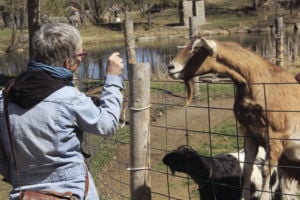 You turn in at the giant metal rooster. Next, you’ll pass the big yellow barn with a pasture out front. Then, turn right into the gravel parking lot and walk up under the wooden entrance way. Follow the sound of the goats.

Big Stone Mini Golf is not what anyone would consider your run of the mill mini golf course. It’s a hidden treasure along the Dakota Rail Trail. It’s a putt putt golf course, petting zoo, sculpture garden, vineyard, community garden and a bonfire pit all rolled into one. It’s tucked away on a dirt road, but it’s not really a secret anymore.

“It seemed like every year we break a record with crowds,” owner and sculptor Bruce Stillman said. “Even if we’re not ready, people seem to show up. We had golfers in February when it was warm. There was still ice in the cups, but they still came and played.”

People come out in hoards now, especially on warm, sunny days. There are little kids playing with their grandfather and families coming in for an afternoon from the Twin Cities.

They come for the golf and to feed the goats. On days when there’s no one working in the clubhouse, Stillman works on an honor system. Pay for your round, grab your own clubs, balls and goat feed.

The goat pen is just inside the entrance to the course and a small group of goats wander around what looks like a miniature version of the sculpture garden in downtown Minneapolis. Flyer is the name of one of the goats who just gave birth this spring.

Sometimes, Stillman lets a goat or two out to wander the whole golf course. Sometimes, he let’s out King or Prince – both horses – to mow down the grass and drink from the ninth hole, where a shallow river brings the balls home. There’s also a mule named Astro, a pig named Floyd and a yet to be named Scottish Highlander cow. They make Big Stone extra special for customers, and home for Stillman.

As much as Stillman loves his animals, his true passion is as a sculptor.

“I’ve been doing it for more than 40 years,” he said. “I actually found my niche when I was 15 years old. I starting making sculptures when I was 16.”

A number of the sculptures in and around the mini golf holes are Stillman’s, including hole number nine. It’s a flat course with big stone pumpkins that hold up shiny, metal leaves. They’re big enough to sit on, and that’s what they’re meant for.

“I’ve gotten into some stone carving and a lot of it is kind of a functional sculpture,” Stillman said. The next hole is another creation of Stillman’s, with some help from the bottom of an old boat and a pizza pan.

Golfer play beneath a large, overturned hull of an old Chris Craft Roamer. It’s portholes are covered in what looks like stained glass, which Stillman created himself.

“It’s recycled eyeglass lenses,” Stillman said. “A machine called an extruder and you can put the clear plastic with colored dye and it’ll kind of squirt out like a giant hot glue gun. These windows were kind of round, so I actually just caught the hot material on a pizza pan and that’s the exact shape of the window.”

Each window is different, giving it the feeling of being in an old cathedral.

“Yeah, it looks like a church,” Stillman said. “It is called holy ship.”

Stillman’s laugh is contagious, and he said he gets a lot of joy from seeing people enjoying his work, and the work of other Minnesota artists that he has on display throughout the course and sculpture garden. He said he’s passionate about helping the local art community and even created a nonprofit called Big Stone Advancing Arts.

“Part of my exit strategy is to make this a permanent part of the community and the nonprofit will take over and end up running it,” Stillman said. “We try to purchase or commission an artist if we like their work, the nonprofit and try to promote Minnesota artists with talent.”

He said about 75 percent of the art featured at Big Stone was created in Minnesota. And it’s enjoyed by Minnesotans of all ages. One of Stillman’s favorite events that’s been hosted at the golf course was a birthday party of a 75-year-old local man.

“I had a lady call up and she said, ‘It’s my husband’s 75th birthday. We wanted to do something special for him, we asked him what he wanted to do and he said he wanted to go to Big Stone Mini Golf,’” Stillman said. “We’ve also had kids’ parties and I like to think those are fun for the parents, too.”

Stillman is passionate about getting families out together. He said he sees a lot of families from the cities coming out to enjoy nature and art in a way that’s not easily accessible where they live. He said he’s happy to provide a place for families to reconnect out in the country.

“It’s good for kids because they’re always on computers, and this is a little more hands on experiences,” he said. “A lot of things in daily life have become institutionalized, just set in a certain way. This is a big rural setting away from everything, it’s nice to have that with sculptures, art and some gardens.”