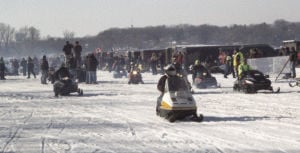 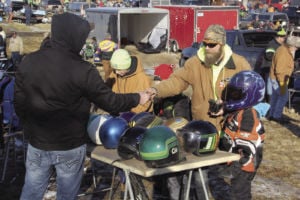 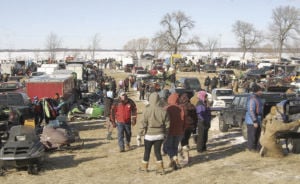 One of the traditional highlights of the winter season is the annual Waconia Ride-In, billed as the world’s largest vintage snowmobile event.

The annual event – no in its 27th year --  is held over a three-day weekend, Jan. 27 to 29, on Lake Waconia. This year’s lineup will feature snowmobiles, as well as honor Sno-Jet and Kawasaki brands, according to event co-chair John Zeglin.

“The reason we’re doing that is Sno-Jet was eventually bought out by Kawasaki, so we’ll combine the two,” said Zeglin.

The event is certainly one of the highlights of the year for people like Delano resident Zeglin, 64, who first got interested in snowmobiling in his younger years when a neighbor on Lake Minnetonka came home with a new Polaris snowmobile.

He and his brother got their first sleds in 1968 and have been riding ever since. Zeglin said he averages between 2,000-2,500 miles a year, including snowmobiling on local Minnesota trails and larger trips to Yellowstone National Park and Michigan’s Upper Peninsula

It was Zeglin who helped bring the Ride-In, originally the Vintage Snowmobile Club of America’s Midwest Ride-In, to Waconia. It was previously held in Alexandria for one year and Cable, Wisconsin, for three years.

Now the event has grown from a one-day affair to a full three-day weekend, packing in the activities -- including an ice-break party at the Waconia Events Center with the featured snowmobiles on Friday as well as a swap meet, trail ride, drag races and a banquet with guest speakers on Saturday night.

This year, both a restored 1975 SST F/A 340 Sno Jet sled and a restored 1979 Kawasaki Invader will be auctioned off during a 6 p.m. banquet as part of a live auction on Saturday. The auctions will benefit Make-a-Wish Minnesota and Mayo Clinic Cancer Research, respectively. Other Saturday events include drag racing and a vintage snowmobile show.

In addition to a Skidoo show and judged event from noon to 2 p.m., Zeglin added the regular trail ride at 11 a.m. and classic trail ride at 2 p.m. and an ongoing swap meet remain key Saturday highlights.

“We had over 800 sleds on it last year, which is a parade wrapped around the lake,” he said, adding it’s certainly a personal highlight for him. “It takes an hour for all the sleds to get taken off and they go and stretch forever around the lake.”

Sunday events continue with the second day of the swap meet as well as a show from 11 a.m. to 1 p.m., a loud snowmobile contest at 1 p.m. and the return of oval racing at 11 a.m.

Attendance last year for the event was at 6,500, so Zeglin is expecting more this year with the return of ice for the lake races and shows.

“All indications are it should be as good as ever,” he said. “I would expect if our ice conditions are safe and solid and we have a little bit of snow, I would expect that to grow. Most every year it seems to get bigger.”

More information on the event can be found at mwvss.com.