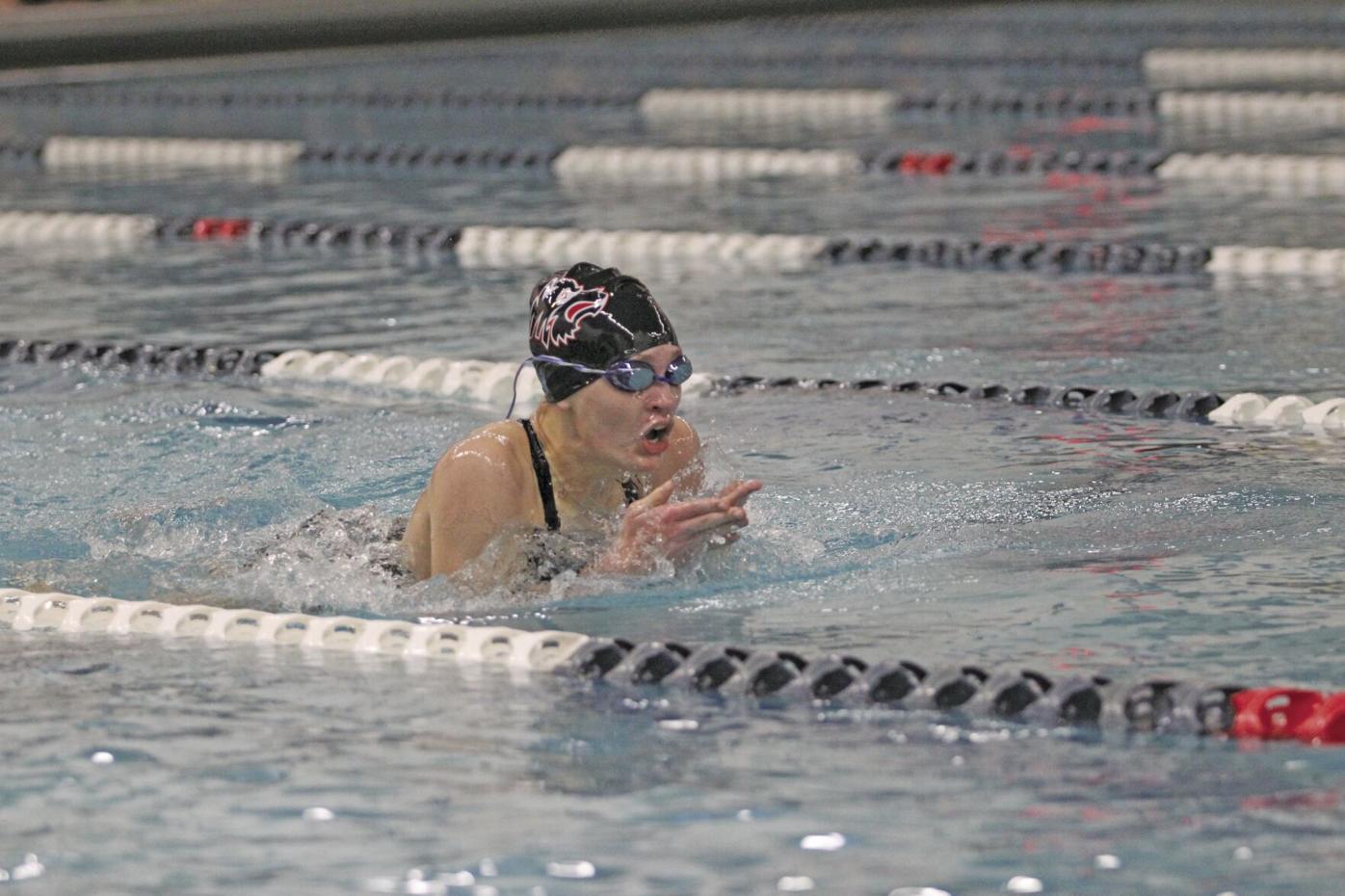 Milaca’s Ashley Welch competes during the Section 5A meet on Nov. 11 at the Becker Aquatic Center. The freshman swam hard but failed to advance to the second day of competition. 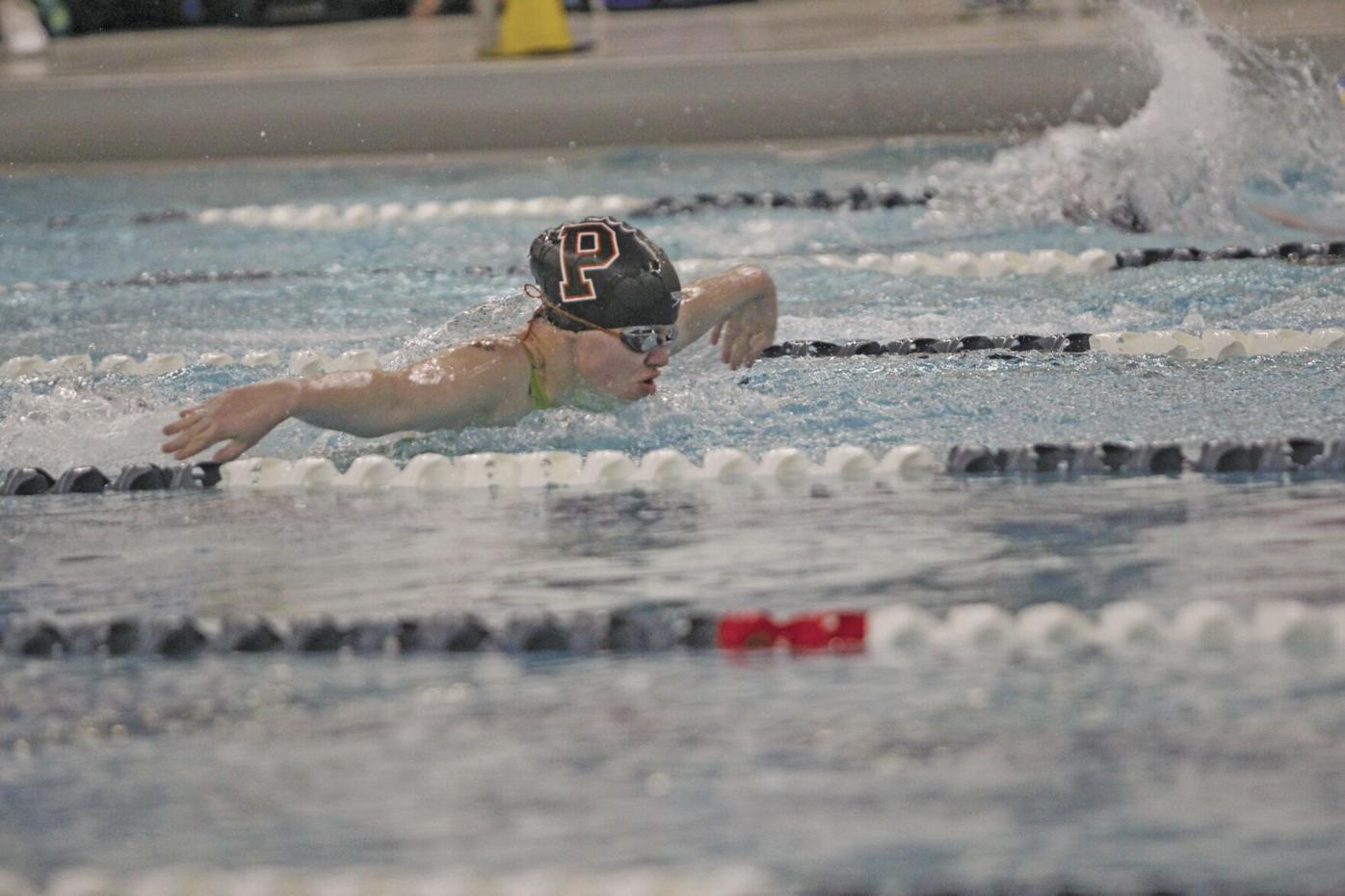 Princeton’s Sydney Negri mid-stroke during the Section 5A meet on Nov. 11 at the Becker Aquatic Center.

Milaca’s Ashley Welch competes during the Section 5A meet on Nov. 11 at the Becker Aquatic Center. The freshman swam hard but failed to advance to the second day of competition.

Princeton’s Sydney Negri mid-stroke during the Section 5A meet on Nov. 11 at the Becker Aquatic Center.

The Tigers and the Wolves dove into the Section 5A swim and diving meet on Nov. 11 starting the three-day competition at the Becker Aquatic Center.

Wrapping up the teams’ seasons, Princeton placed seventh with 99 points in the meet while Milaca claimed an eighth place finish with 97 points.

On the Wolves’ side, Milaca was able to send eight athletes from the team to the final day of competition on Nov. 13, a positive ending for the year said Milaca Co-Head Coach Jen Burroughs. “Overall this meet was a success for the team,” said Burroughs.

Leading the way in the pool for Milaca was a strong handful of performances by the Wolves’ sophomore Hilary Leom.

Leom was able to help Milaca medal in all four of the events she participated in during the championship round, most notably with her sixth place finish in the 100-yard breaststroke at a time of 1:13.17.

Along with Leom, the teams for the 200 freestyle relay with Abby Anderson, Addy Greninger and Addison Vivant placed sixth with a time of 1:47.29.

Joining that relay was the Milaca 200 medley of Vivant, Leom, Anderson and Kate Bolt, finishing seventh at 1:59.29. while the 400 freestyle relay having Reina Mikla, Jada Kotsmith, Greninger, and Leom came in eighth, swimming a time of 4:02.64.

Seeing a majority of those that advanced to the final day of the meet finish their year with a medal was proud moment for Burroughs as a coach. “These girls are the core of our team, as their coach it is great to see their hard work and dedication paid off when it counts.”

Now entering into the offseason for the Wolves, Milaca will have to say goodbye to a another great group of seniors said Burroughs. “The 2021 seniors have been one of the most positive and cohesive groups I have had the pleasure of coaching. Their leadership shined the brightest on the pool deck cheering on the team, being the supportive and listening ear when needed, and coming to practice each day with a smile on their face,” said Burroughs as Bolt, Elle Dunn, Haley Juetten, Avree Patchen and Lynn West will all depart from the team.

Though losing those quality members of the team, the Wolves will return a great group of talented swimmers and divers to the pool next year. “I am so excited to see where they will take the team for the 2022 season,” said Burroughs.

Time and time again, the Princeton girls have been led by Callie Metsala in the pool this season.

The Section 5A Championship Meet was no different as Metsala was able to lock up a trip to the Minnesota State High School League’s Class A Swim Meet for two events.

Being able to reach the coveted meet is a big deal to the junior. “It is a huge accomplishment for me to make state in two events. It has been a goal of mine for the last couple of years. It really means a lot to achieve this goal after years of hard work in and out of the pool,” she said adding that she is excited to finally go complete at state this year after qualifying for state last year but having the meet canceled due to Covid-19.

Also aided by Metala were a few Princeton relays.

Now with the state meet queued up for the junior in Metsala, she looks take it all in, enjoy the opportunity and finish strong. “I want to finish off my junior season with strong swims.”

Metsala traveled to Minneapolis to compete in the state meet hosted by the University of Minnesota’s Jean K. Freeman Aquatic Center on Nov. 19 for the opening round of the meet.

If Metsala advances, she would again compete the next day in the finals.