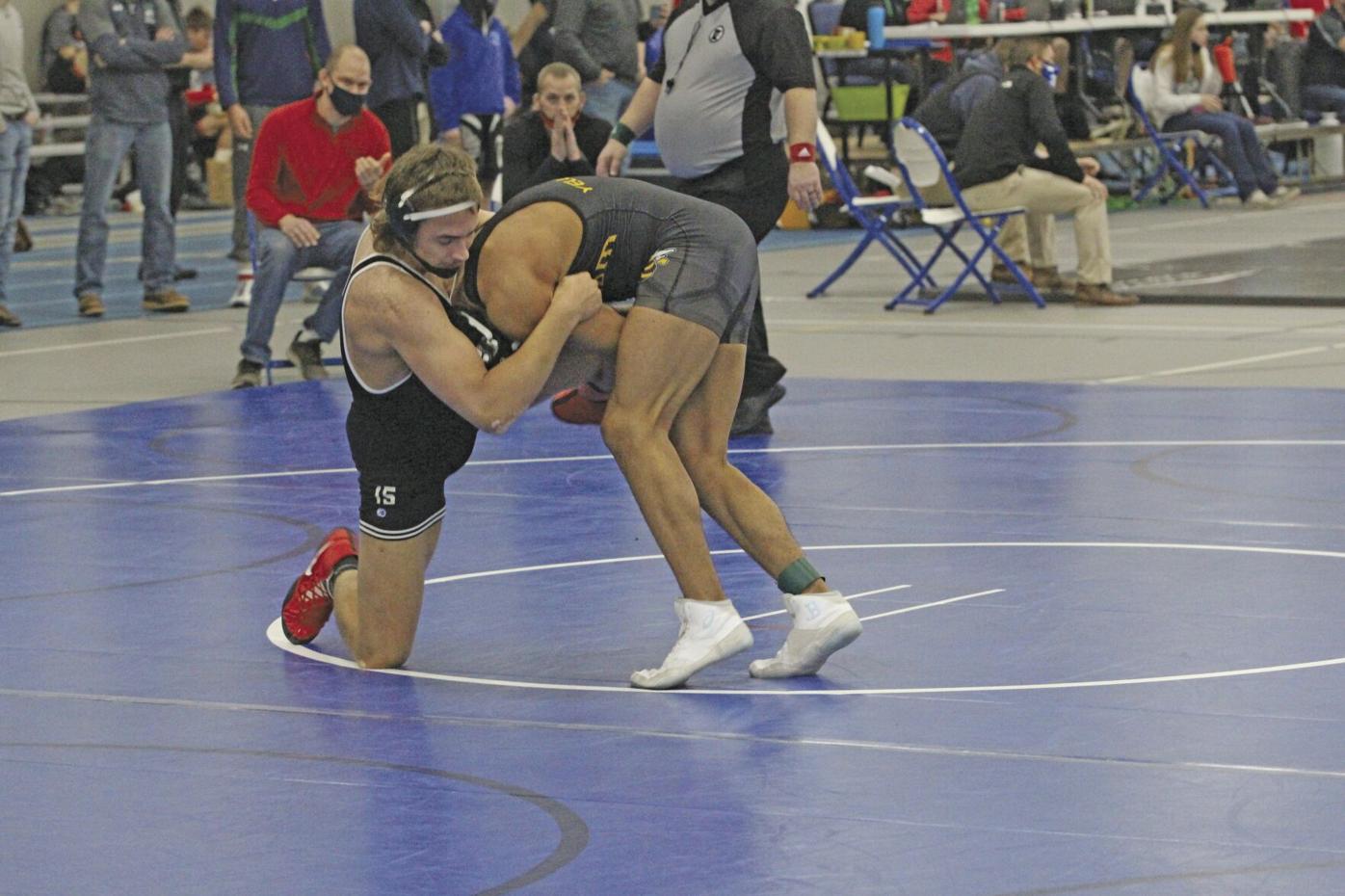 Bodee Zens grappling with his opponent from Perham on March 20, in Foley. Zens was able to place second in the meet at the 195-weight class, securing him a spot in the Class AA State Wrestling meet. 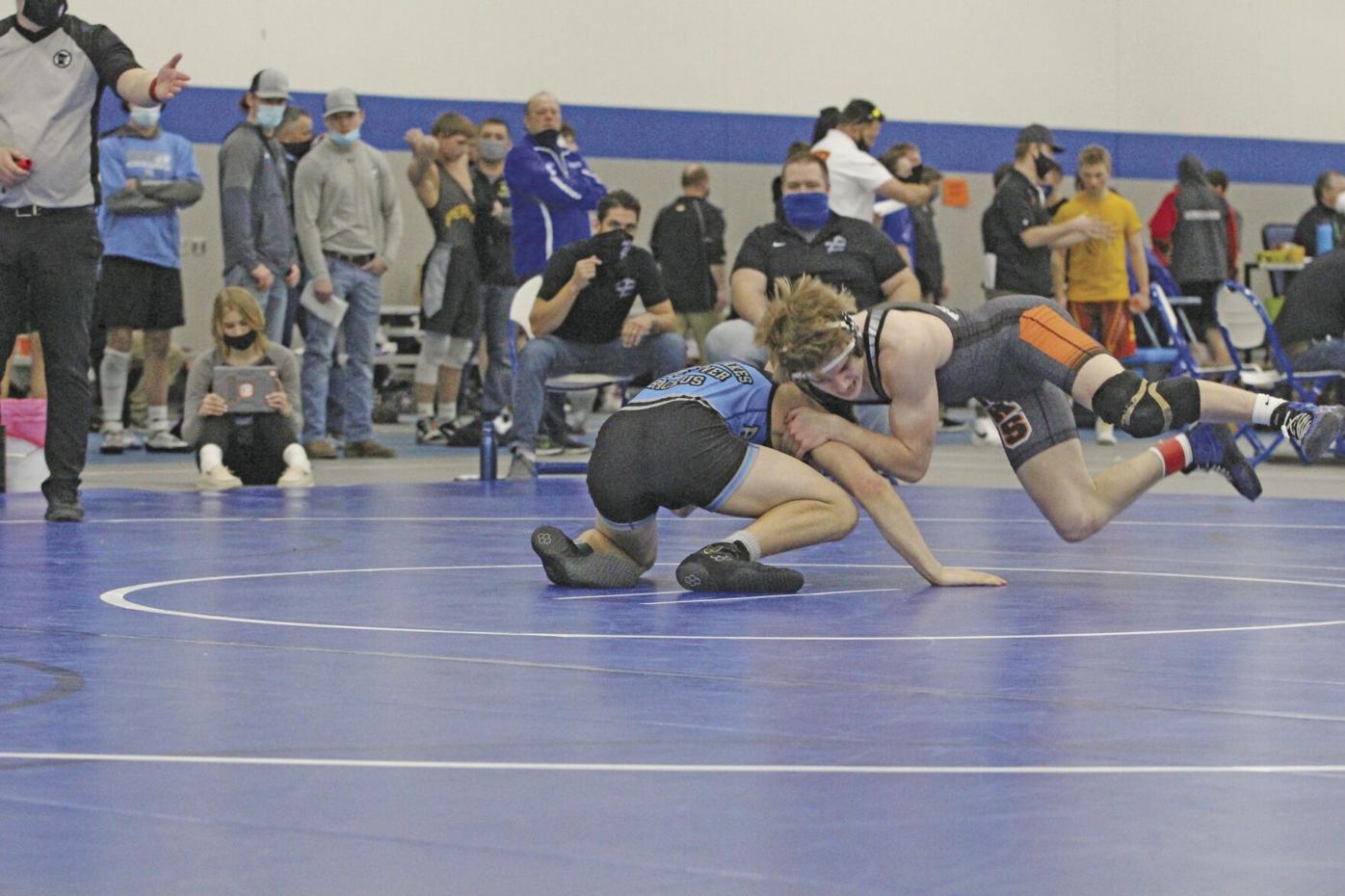 Zach Wells of Princeton was poised to make a return trip to the State meet, but an injury derailed his path. Wells placed third in the meet at the 152-weight class.

Bodee Zens grappling with his opponent from Perham on March 20, in Foley. Zens was able to place second in the meet at the 195-weight class, securing him a spot in the Class AA State Wrestling meet.

Zach Wells of Princeton was poised to make a return trip to the State meet, but an injury derailed his path. Wells placed third in the meet at the 152-weight class.

The Princeton wrestling team entered into the Section 7AA and 8AA individual tournaments with high hopes for the tough squad after sending 11 Tigers to the Minnesota State Individual State Preliminaries for 7AA and 8AA.

Princeton was able to live up to those high expectations, sending five of those wrestlers to state while seeing four more place in the top four on March 20 in Foley.

Tigers’ Head Coach Brian Hellman was mostly pleased with the performances shown through on the mats by the strong wrestlers. “Everybody wrestled really well. I think we were a little flat at time, there were some guys that could have wrestled better, but overall it went well,” said Hellman.

Princeton wrestlers advancing include Tyler Wells at 113-pounds, Noah Vanderbeek at 120-pounds, Landen Parent at 132-pounds and Kyle Boeke at 138-pounds were able to win their respective tournaments and secure trips to the state meet as individuals.

That group of four will be joined by Tiger, Ethan Ballweber, who fell just shy of winning his bracket, losing a 4-3 decision to his foe from Pequot Lakes/Pine River-Backus.

Most notably missing from the group advancing to state is Princeton senior, Zach Wells, who placed third at the state meet last year.

Hellman said Wells fell short of his quest to make it back to the state tournament due to injury but knows Wells’ wrestling career will bounce back from the disappointment. “I know he had high goals and he maybe fell a little short due to injuries but there’s bigger and better things coming in the future for him,” said Hellman, as Wells placed third in the Section 7AA and 8AA bracket.

Other place winners for the Tigers include Zach Marshall with third at 170, while Deegan Birkaker at 106 and Kaden Olson at 195, both placed fourth, respectively.

Up next for the five wrestlers that are moving on will be a trip to St. Michael-Albertville High School on March 26, for the individual Class AA tournament.

Also advancing to the state tournament will be the Princeton team after winning the Section 7AA and 8AA team tournament on March 13.

The Tigers were seeded fourth and now know their opponent is to be top-ranked Simley. Princeton and the Spartans have already squared off once this season with Simley winning, 64-10.

Knowing what they are in for with the tough Spartans, Hellman knows the team will just have to do what they can against the historic squad. “Simley is a once in a decade type team. You don’t see a team like this every year. They are one of the top ranked teams nationally. I think we are just going to look at individual match ups in there and strive to win matches or have them be closer than they were last time around,” said Hellman.

The two face each other in the Class AA State Semifinal on March 26 with the winner advancing to compete for a state title.

It was a historic day for Milaca’s Bodee Zens.

Zens was able to pick up his 100th career win at the varsity level for the Wolves while keeping his career alive as a second place finisher at 195-pounds at the 7AA and 8AA Individual Tournament.

Coming into the season, advancing to state and picking up his 100th win were both goal for the senior, Zens. Being able to accomplish both on the big stage made it even more enjoyable for the wrestler. “They were two of my goals coming into the year, just to get them both accomplished was what I was going for to and do it made it even better,” said Zens.

Zens was able to seal his 100th win after pinning Gordan Eynart of Perham in his opening match in the MSHSL State Prelims for 7AA and 8AA. Zens was able to wrestle his way past his second round opponent, before falling the in the championship to secure second place in the meet.

Milaca Co-Head Coach Clay Hoeck was happy to see Zens knock down both of his accomplishments on the same afternoon. “It was huge. He (Zens) now goes down in the record books in the 100-win club for Milaca and he certainly deserves it. He has put his time and effort in,” said Hoeck.

Elsewhere in the meet for Milaca, Brody Ash fell in heart breaking fashion as the senior heavyweight dropped his third place match by a 2-1 decision to give him fourth for the tournament.

Ash was joined by Jack Schoenborn as the third Milaca wrestler to place as the 132-pounder claimed third place in his bracket.

Schoenborn had a chance to advance to state after wrestling all the way back to the second place match, but fell via pin in the second round.

With Zens locking up a bid to travel to St. Michael-Albertville High School on March 26 to wrestle for a possible state championship, the senior looks to start the meet hot and not look back. “I want to win that first match, take it one at a time and keep it going,” he said.

Hoeck hopes to see the same from Zens. “Hopefully we can sneak out a win in that first match.”