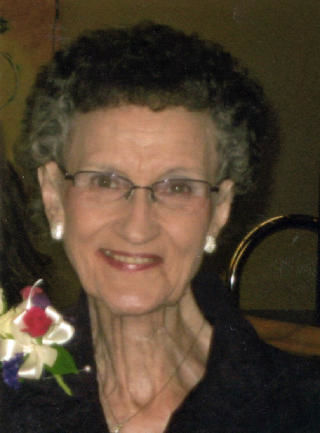 Funeral services for Shirley Malmborg, age 87, of Milaca, will be held Monday, January 13, 2020 at St. Paul’s Lutheran Church in Milaca. Interment follows at Crystal Lake Cemetery in Minneapolis.  Shirley Pearl Mueller was born on March 12, 1932 at Saint Barnabas Hospital in Minneapolis to the late Henry Mueller and Agnes Pape. She graduated from North High in Minneapolis and shortly after, was united in marriage to Harvey Malmborg on November 26, 1950 at Immanuel Lutheran Church in Minneapolis. The couple made their home in Minneapolis until 1968 when they moved to Robbinsdale. After retirement, in 1987, Harvey and Shirley moved to Milaca to be closer to their grandchildren. Shirley was employed at both a bank and an insurance office but spent the majority of her working years as a homemaker and very active working in and for the church. She had a strong faith and will be remembered by many for her giving heart, respect to others and hardworking ways. She loved spring, baking, watching her favorite soap operas during the day and Wheel of Fortune by night, shopping and going to lunch with a piece of pie and coffee for dessert. Together, she and Harvey enjoyed camping trips with friends and taking their grandchildren to Disney World. Shirley passed away, surrounded by family and love, on Wednesday, January 8, 2020 at CentraCare - St. Benedict’s Senior Community, St. Cloud. The family would like to extend a tremendous thank you to the nursing staff at St. Benedict’s as well as, the CentraCare hospice team. Left to cherish her memory is her daughter, Sharon (Ron) Moe of Milaca; grandchildren, Stephanie (Jason) Theisen of Milaca and Ashley Moe of Sauk Rapids; great-grandchildren, Brock Theisen and Brayden Theisen. She was preceded in death by her parents, beloved husband Harvey, daughter Sandra Lynn, siblings Harry Mueller and Jim Mueller.

To send flowers to the family of Shirley Malmborg, please visit Tribute Store.