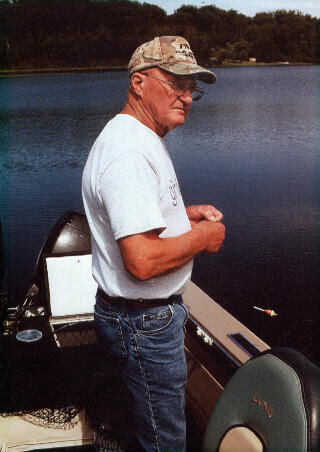 Robert Owen Johnson was born in Borgholm Township, Milaca, MN on September 26, 1930 to Carl A. and Anna (Ingman) Johnson. He attended Milaca schools and graduated from Milaca High in 1949. Following graduation in 1950, he enlisted in the U.S. Marine Corp and later was granted a medical discharge. In 1952, Bob entered the U.S. Army, where he served in the medical field at Letterman Army Hospital in San Francisco, CA, until 1954. Bob returned to Milaca and on April 28, 1956, he married Janet Huemoeller. Bob had a strong work ethic, caretaking spirit and a great eye. He shared his talents working for Fransen Decorating and then in 1974 started his own business, JOHNSON DECORATING. Together with his wife Janet by his side, they purchased and remodeled homes and businesses in the area, always working to re-purpose the spaces, including building two homes of their own. Embracing nature and loving the outdoors was central to Bob’s caring spirit. He enjoyed hunting at the deer shack in Big Fork, MN, as well as trips to Wyoming, fishing in Minnesota lakes, and Canadian Fly-Ins. Bob spent many cold/snowy winters riding snowmobiles with the Bay Lake Snow Packers. He loved keeping busy; tapping trees to make and bottle maple syrup, carving walking sticks and making furniture from diamond willow, and painting naturescapes. Bob was such a kind man, dedicated to all things that mattered in his family, friends and community. He had a twinkle in his eye and fondness for his grandchildren. He was found supporting their endeavors on the sidelines, sitting on a bleacher, theater seat or in an auditorium. Bob never missed a chance to help a neighbor, whether in the barns or the field. The expression “you can take the boy out of the farm, but you can’t take the farm out of the boy,” certainly applied. Bob was a member of the Milaca American Legion Post # 178, Milaca Lions, Masons, Chamber of Commerce and a charter member of the Milaca JC’s. He was a lifetime member of Zion Lutheran Church in Milaca. He is survived by his wife of 64 years, Janet; children, Timothy (Jean) Johnson, Judy (Rich) Mycue; grandchildren, Abby (Zac) Schnedler, Isaac (Kaitlyn) Johnson, Maggie (Felipe) DeFelice, Clay (Justine) Mycue; great-grandchildren, Griffin and Grayson Schnedler, Maisie Johnson, Esperanza and Joaquin DeFelice; sisters Dean Fransen, Joyce Bouma, Joan Van Grinvsen and brother, Paul Johnson. He was preceded in death by his parents; brothers, Bill, Curt and Jerome; sisters, Ethelyn, Shirley and Lois. Private services were held at Zion Lutheran Church in Milaca. Interment with full military honors followed at Forest Hill Cemetery in Milaca.