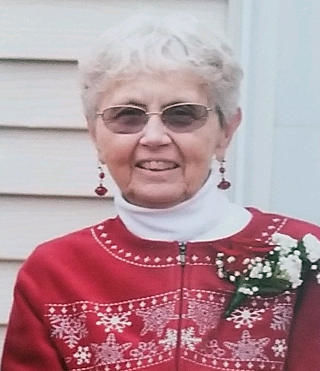 Maxine Violet Gruba (Swalboski), age 85, passed into the arms of God at her home in rural Foreston on Sunday, June 21, 2020. She was surrounded by her husband of 65 years, her children and her faithful cat DD. Funeral services were held Monday, June 29, 2020 at St. Paul’s Lutheran Church in Milaca. Interment followed at Forest Hill Cemetery in Milaca. Maxine was born in Benton County on November 4, 1934 to Fred and Violet (Swedberg) Swalboski. She attended country school at Woodland District 1228 in rural Morrison County. Maxine graduated from Milaca High School in 1952 and worked as a legal secretary for Leonard Paulson and Bill Lines. Maxine married Al Gruba on April 2, 1955 at Bethany Lutheran Church in Ramey.  They resided in northeast Minneapolis for several years where she worked for Raymond Brothers trucking company. In the early 1960’s, Maxine and Al bought a dairy farm in rural Foreston where they raised their two sons, Tim and Alan, and worked the farm for over 25 years. While still working the farm, Maxine returned to work for attorney Bill Lines for over 35 years before retiring. Maxine was a strong, “no-nonsense” woman who loved her family deeply.  She was immensely proud of her children and grandchildren, faithfully attending their softball games and high school sporting events. Maxine was her family’s “go-to” person, generously giving of her time and energy to care for her baby brothers, her parents and aunts as their health declined and her husband, Al. She enjoyed bowling and spending time with her family. She had a soft spot for animals, and had several dogs and cats during her life. Her cat DD was constantly at her side.  A great cook, she will always be remembered for hosting family get togethers at holidays. Her ice tea, potato salad and bars were a must. She was a role model for her family, demonstrating that a strong woman can be loving, kind, generous and accepting. She was an active member of St. Paul’s Lutheran Church of Milaca for over 50 years, serving as Treasurer, singing in the choir, participating on the altar guild, working at the annual Stew Supper and church lunches.  Maxine is survived by her loving husband of 65 years, Al;  devoted sons, Tim (Mary Jo) Gruba and Alan (Vicky) Gruba both of Milaca;  grandchildren, Nicholas Gruba of Dalbo, Ryan (Heidi) Gruba of Foley, Andrea (Steve) Swenson of Milaca, Michelle (Levi) Fjerstad of St. Cloud, Evan (Lana) Gruba of Milaca, Kelsey Gruba of Milaca;  step-grandchildren, Jeremy (Melanie) Gothman of St. Cloud, Joe (Amie) Gothman of Foley; great-grandchildren, Atley and Beckett Gruba of Oliver, Jack and Evelyn Swenson, Wyatt Fjerstad and Violet, Brynnley and Rylee Gruba; step-great-grandchildren, Tyson, Jamison and Mattson Gothman, Austin, Ethan, Jackson, Emmalyn, Olivia, Ariana, Greyson, Dominic and Eleanor Gothman; brothers, Jerry (Millie) Swalboski of Milaca, Ron (Dee) Swalboski of Mesa, AZ, Jon (Paul) Swalboski of Provincetown, MA, and Craig (Dawn) Swalboski of Rochester and many nieces, nephews and extended family. She was preceded in death by her parents, Fred and Violet Swalboski.