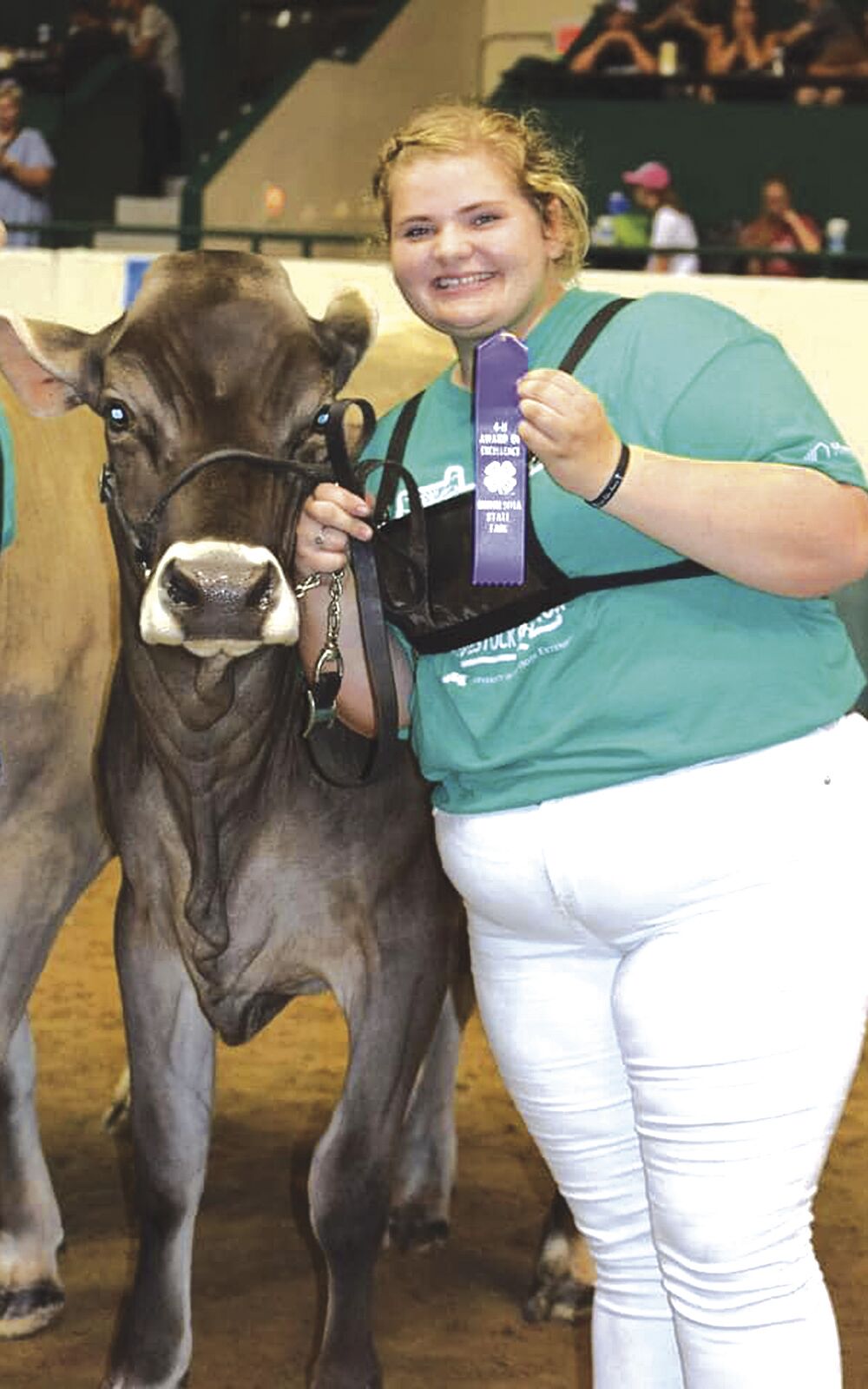 Gracie Ash is pictured with her Swiss summer yearling in August at the Minnesota State Fair. 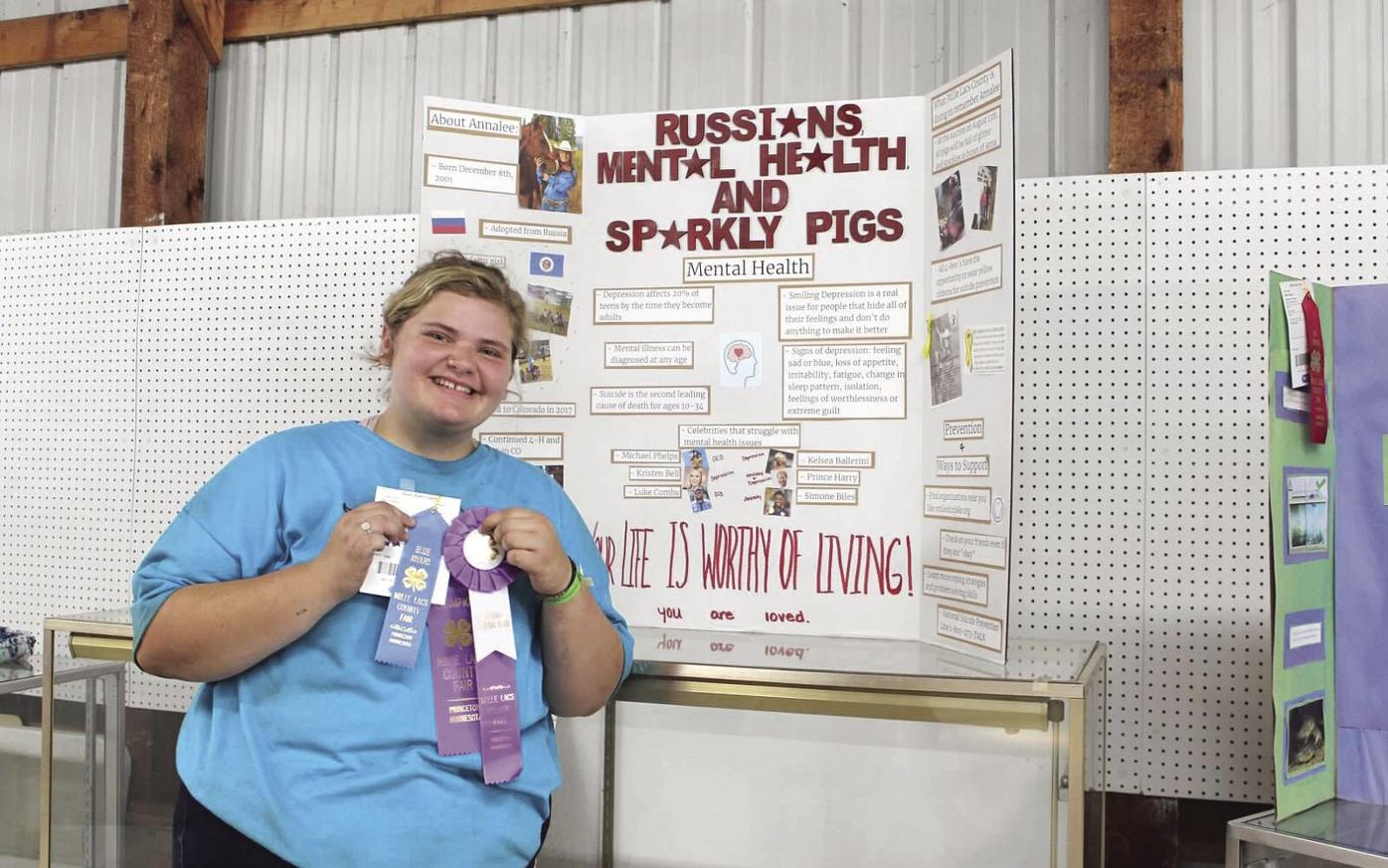 Gracie Ash is pictured with her static display at the Mille Lacs County Fair in Princeton back in August.

Gracie Ash is pictured with her Swiss summer yearling in August at the Minnesota State Fair.

Gracie Ash is pictured with her static display at the Mille Lacs County Fair in Princeton back in August.

Her ribbons won at the county and state fairs, as well as the leadership role she has taken within the local 4-H program are signs of her commitment to the dairy industry.

But it’s the 2021 Milaca High School graduate’s committing to highlighting the severity of mental health struggles among teens and young adults that is turning heads.

The daughter of Mike and Shelly Ash, Gracie is know for showing pigs, dairy cattle, and dairy beef steers at the Mille Lacs County Fair and Minnesota State Fair.

“If it’s fair week and you can’t find me, check the dairy barn,” Gracie said.

That’s what you’d expect from a dairy-oriented family like the Ashs.

But when a close friend of Gracie’s died by suicide, Gracie decided to send a strong message about mental health issues using her background in 4-H.

Gracie, who is a freshman at the University of Minnesota where she is studying created her first-ever static display and entered it at 2021 Mille Lacs county Fair.

The display was designed with the intention to educated fellow 4-Hers and community members of mental health issues and teen suicide, Gracie said.

“It’s not talked about very often, and it should be,” Gracie said.

“It needs to be talked about because of how it affects our community and our county,” she added.

Titled “Russians, Mental Health, and Sparkly Pigs,” the project told the story of her friend and who she was, as well as highlighting mental health statistics and people relevant to Gracie’s age group that suffer from mental health issues.

Gracie’s friend was known in 4-H circles for the applying of glitter on her pigs at competition time. That’s where the Sparkly Pigs came into play as Gracie shared the story of her friend as part of the project.

Russians Come in because her friend was adopted from Russia when the friend was three years old.

When it came to Mental Health, Gracie’s project hit home the fact that suicide is the second-leading cause of death among people ages 10-34. In addition, data showed that 20 percent of teens have reported experiencing depression by the time they become young adults. Gracie shared such facts with prevention tips, support information such as suicide prevention helplines and information on how one can find support organizations near them.

This fair season Gracie continued to show animals because its her passion. As a matter of fact, she had a successful year earning blue, purple and grand champion honors with her dairy cattle at the county fair in Princeton. At the State Fair in St. Paul, Gracie earned a purple ribbon with her brown Swiss summer yearling and 7th place in advanced showmanship. She also gave a livestock demonstration on how to give animals a physical examination prior to calling the veterinarian.

But its her mental health project that opened new doors for the longtime 4-H participant. She earned blue and purple ribbons at both the county and state fairs with her project.

“It’s been super-rewarding,” she said.

In addition to entering a static project regarding mental health at the county and state fairs, Gracie also made 300 yellow ribbons that she distributed at the county fair. The yellow ribbon is an emblem for suicide prevention awareness, particularly for young people. It gave 4-Hers an opportunity to show their support for mental health awareness and suicide prevention, Gracie said.

Also, in a nod to Gracie’s friend who died of suicide, the 4-Hers who were having pigs judged at the county fair applied glitter to their pigs to make them all sparkle that night.

As for Gracie? She didn’t enter a pig at the county fair this year because one is allowed to enter just one type of livestock in fair competition. But she still carried on the spirit of her fellow 4-Hers.

“I showed a steer, a good-looking steer that I’m really proud of,” Gracie said. “I sparkled the heck out of it!”

Seeing all the pigs decked out in glitter was an emotional experience for Gracie.

“I was overwhelmed with emotion that night. I felt like I was at the fair with her again,” Gracie said of her friend. “It was an awesome feeling.”

“Gracie is a great example of how 4-H is about livestock and so much more. It was so much fun to see a young lady who honestly knew so much already about 4-H continue to grow and shine,” said Amber Sixberry, the U of M Extension educator for Mille Lacs County.

“She has been an amazing leader, mentor and friend to so many in our program,” Sixberry said of Gracie.