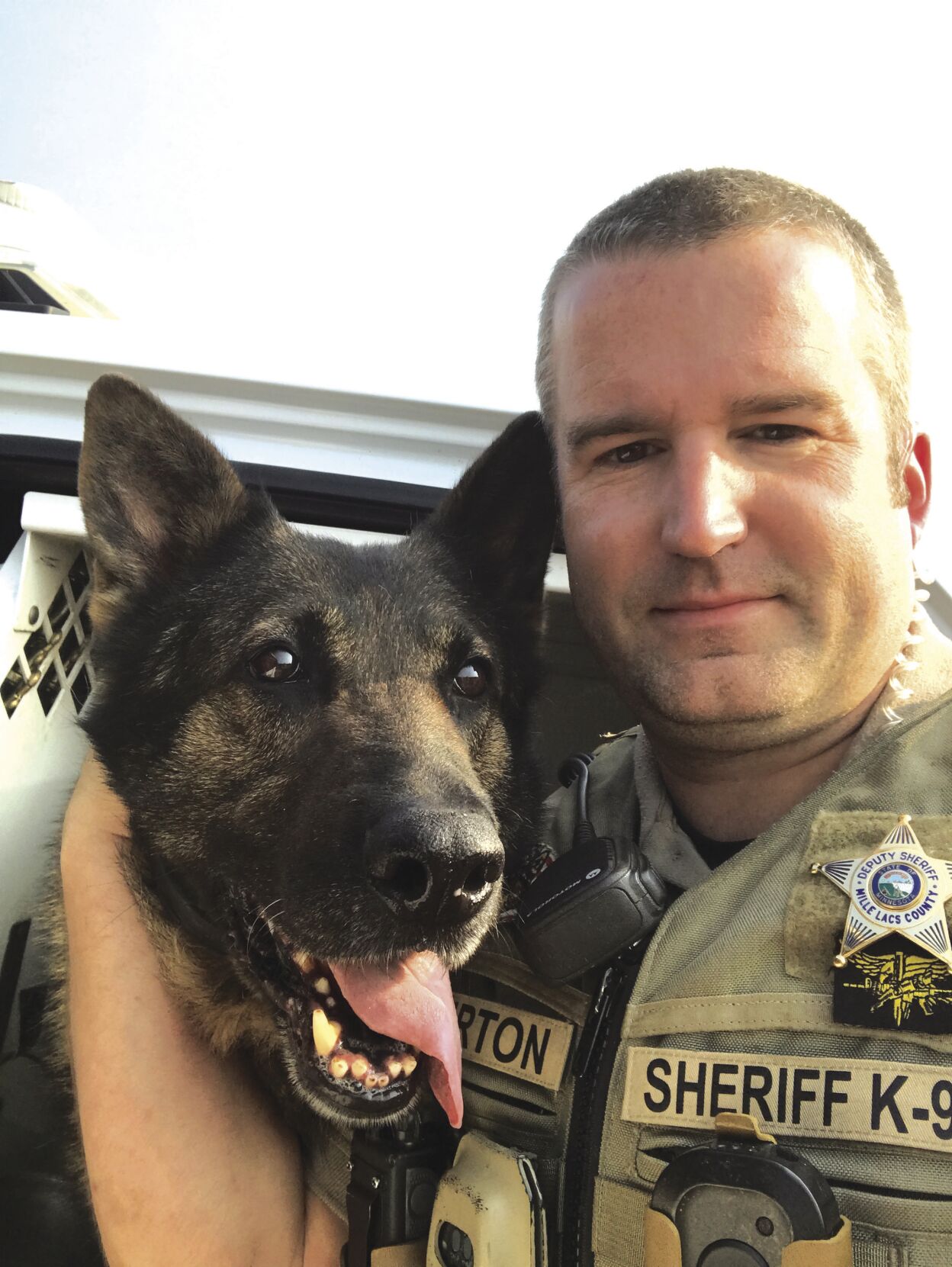 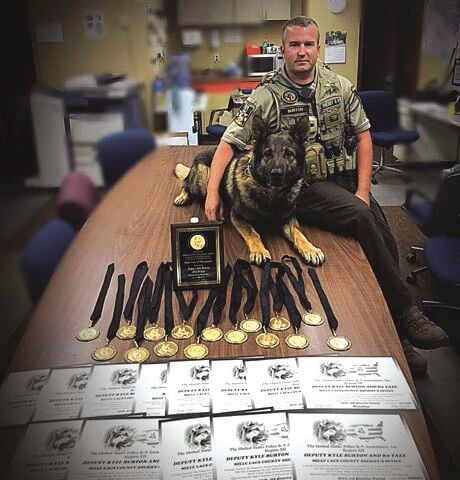 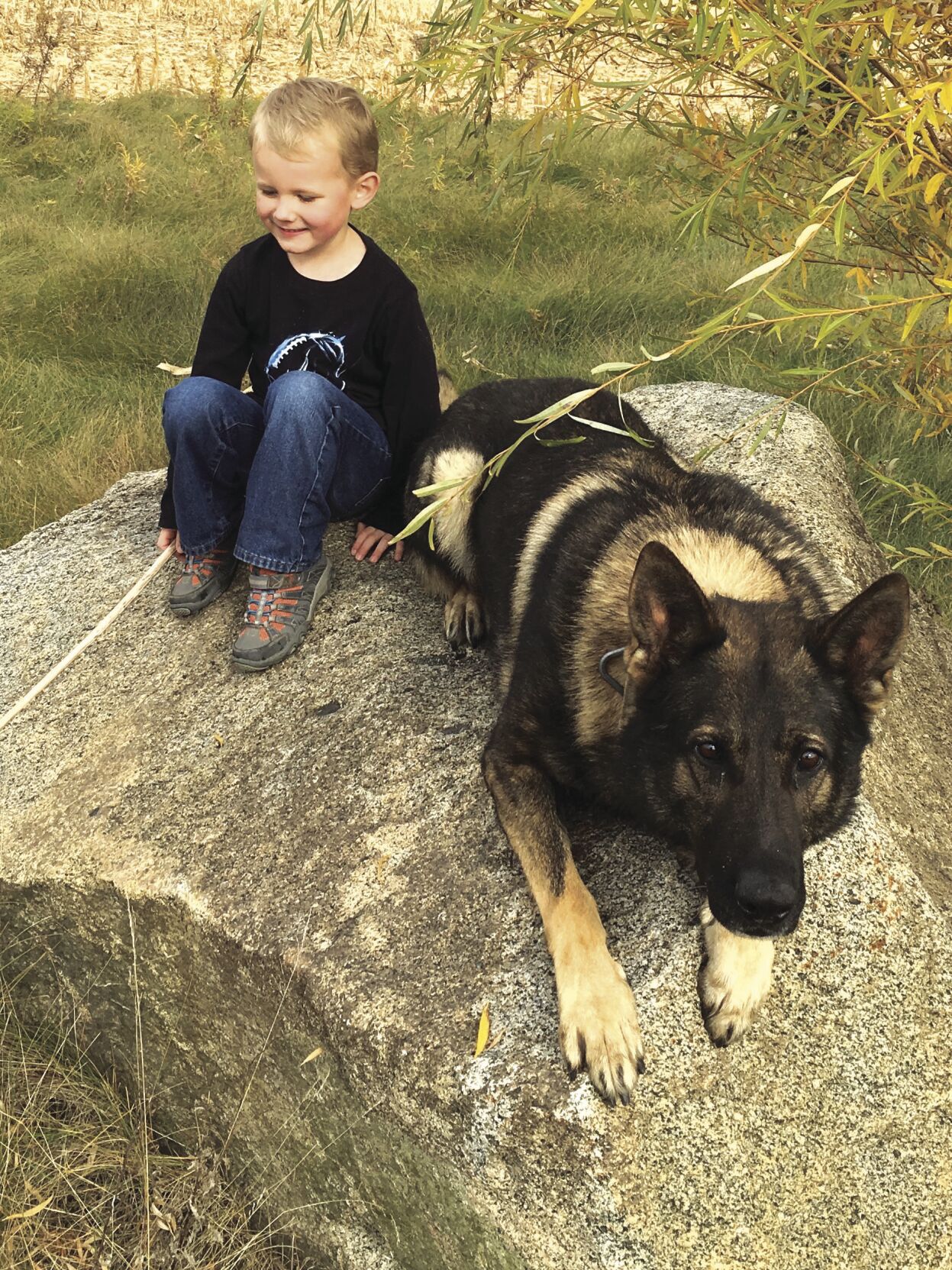 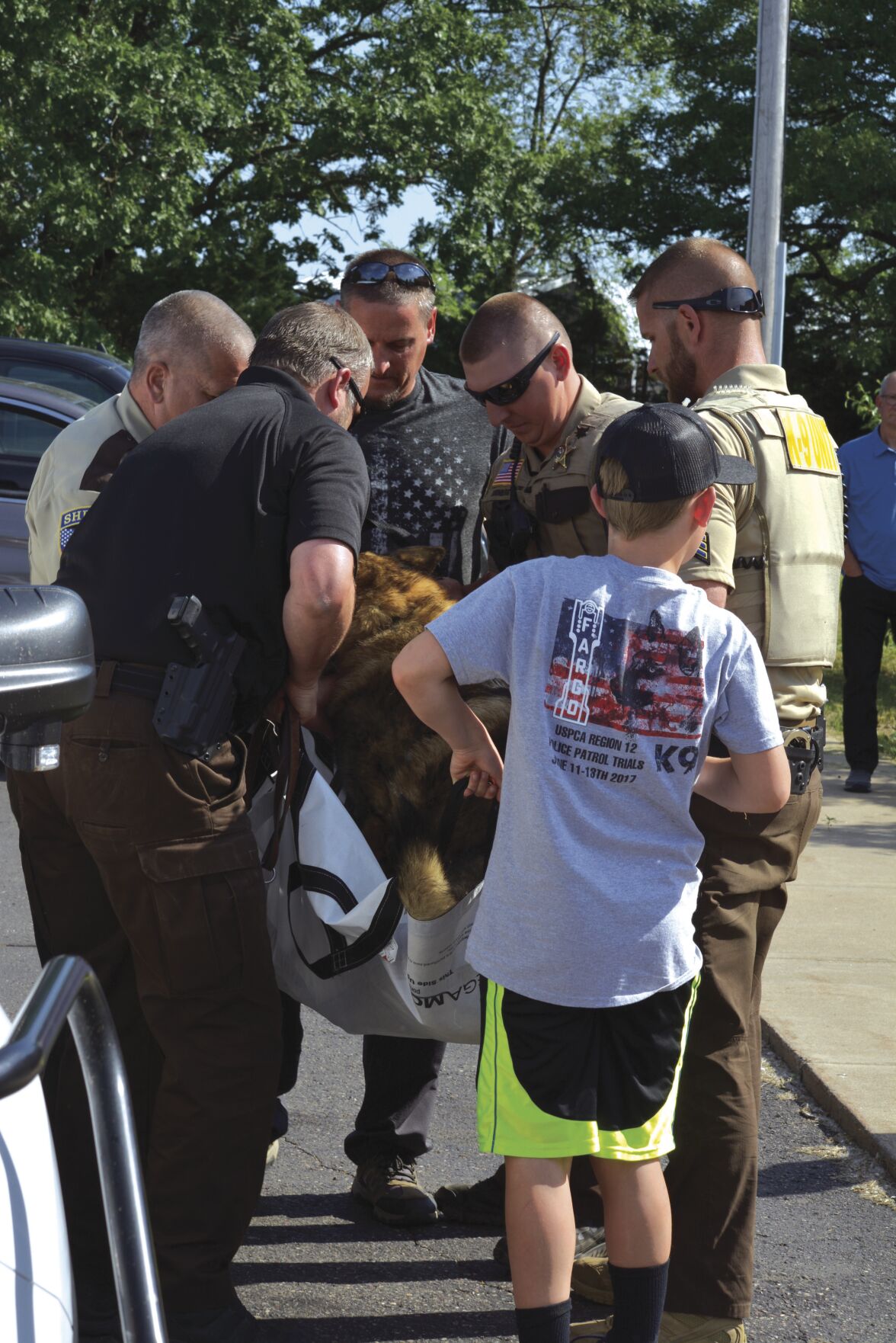 About 24 vehicles escorted Yazz on his way to Northwoods Animal Hospital in Princeton. Officers and deputies from the Mille Lacs and Sherburne County sheriff offices, Princeton, Elk River and Milaca police all turned out to show their respect.

At Northwoods, Yazz was carefully lifted out of a vehicle and placed on a tarp, which five men used to carry the dog past two lines of saluting officers and into the building.

“I would say he was definitely a once-in-a-lifetime dog,” Burton said.

Burton began working with Yazz in March 2011 and eventually retired him in August 2017, when he joined Burton as a pet. Yazz was named after Officer Jeffrey Yaslowitz. He was a friend of Burton’s who worked in St. Petersburg, Florida, and died in the line of duty in 2011, according to Burton.

When Burton started he was the only K-9 unit in Mille Lacs County, he said.

“I remember there were times when I would get called out of bed at 2 o’clock in the morning to go track somebody, run through a swamp, get home, shower, try to fall back asleep, and the phone rings again in an hour and you gotta go out and do it all over again,” Burton said.

Yazz was from Slovakia, according to Burton. He got the dog when Yazz was 19 months old and Yazz would have celebrated his 12th birthday this August.

After all the years of working together, Burton said he could probably write a book of all the memories he has with Yazz. One night that sticks out to him in particular involved tracking a suspect who had crashed a car into a house after fleeing the State Patrol.

By the time officers found the wreck, the driver had already fled on foot. Yazz began tracking the driver from the car for about a block or two, before jumping into a flower bed and apprehended a woman hiding in the flowers.

“So I’m dealing with that; well, as I’m doing that, I hear a little girl crying — a small child,” Burton said.

Burton looked down and found that the child, who the driver had taken with her from the car when she fled, was lying in the flower bed.

“Yazz actually jumped over the child and apprehended the adult, and completely ignored the child, which just completely took me by surprise,” Burton said.

Yazz and Burton also spent a lot of time in the community, performing demonstrations and meeting residents. Yazz had over 100 tracking arrests in his career along with the drugs, cash and vehicles he helped the office seize.

“He wasn’t a hard dog to work, I just kinda tried to hold onto the leash and he did the rest of the work for me,” Burton said. “That was an awesome experience for me as a new dog handler.”

Burton was allowed to purchase Yazz once the dog retired from his life on the police force.

At 11 Yazz had lived a little longer than most police dogs. Police work can put a strain on the dog’s body, and many only make it to 9 or 10 years old, according to Burton.

“Their job is very physically taxing on their bodies, as you can imagine,” Burton said.

Yazz suffered from degenerative myelopathy, a disease with no known cure that can paralyze and eventually kill a dog. It usually starts with a lack of functionality in the dog’s hindquarters and shuts down limbs and organs as it moves forward, according to Burton.

Burton wanted to thank the community, because the Sheriff’s Office was only able to purchase him thanks to donations from the public, he said.

“These dogs go out and do an incredible job every night and they ask for nothing in return,” Burton said. “You know they don’t get a paycheck. They just do it, and they’re absolutely fearless when they do it. They don’t think about themselves, their personal safety or any of that kind of stuff that we think about.”