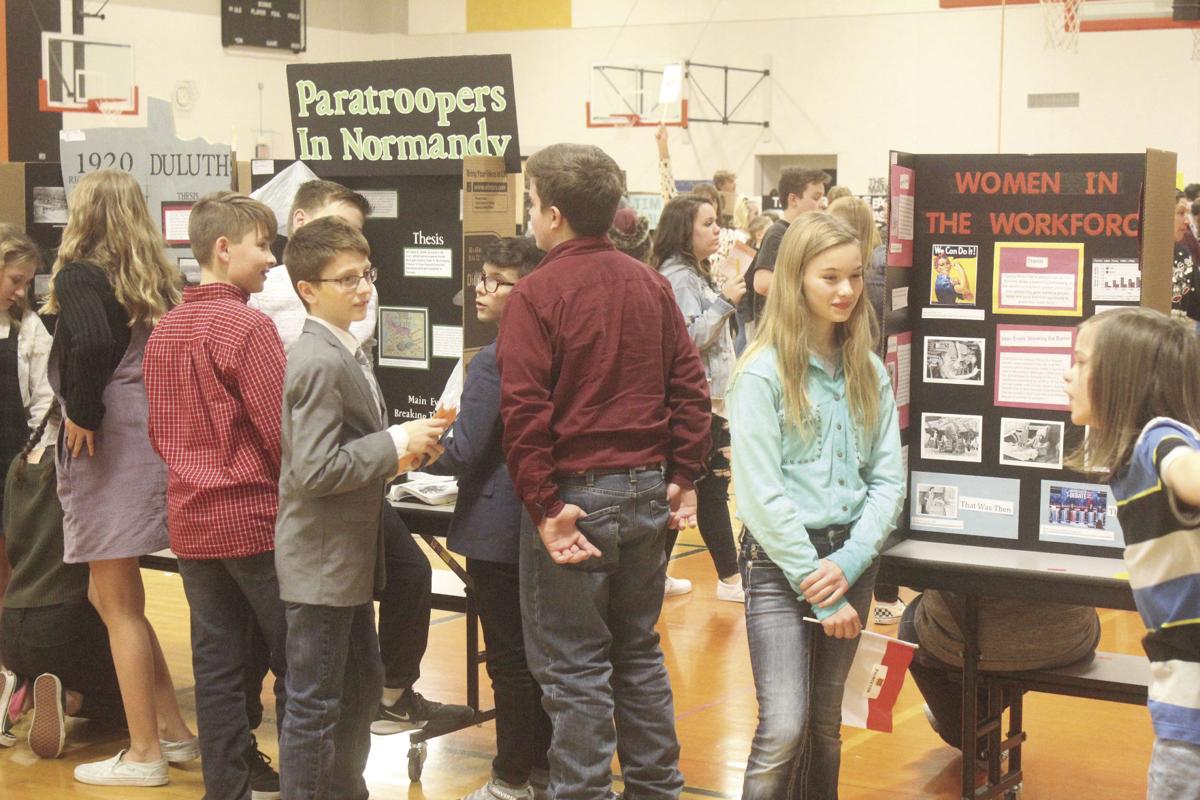 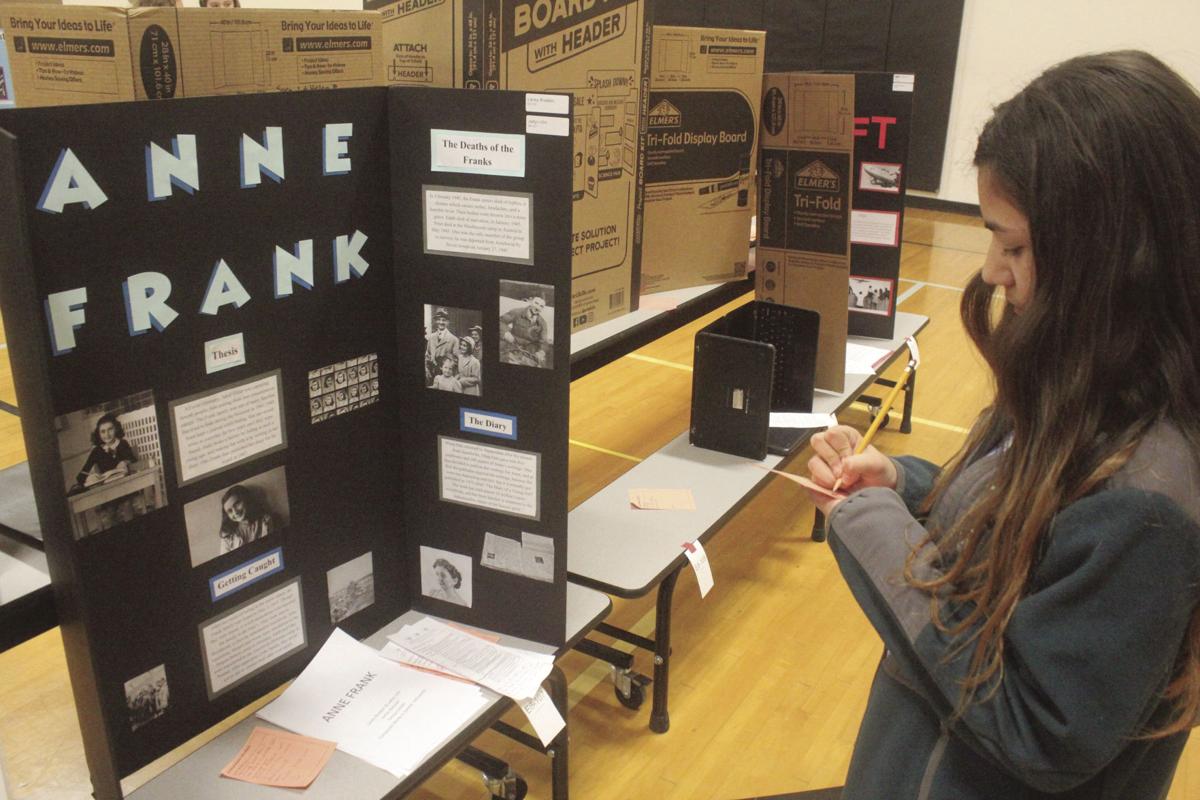 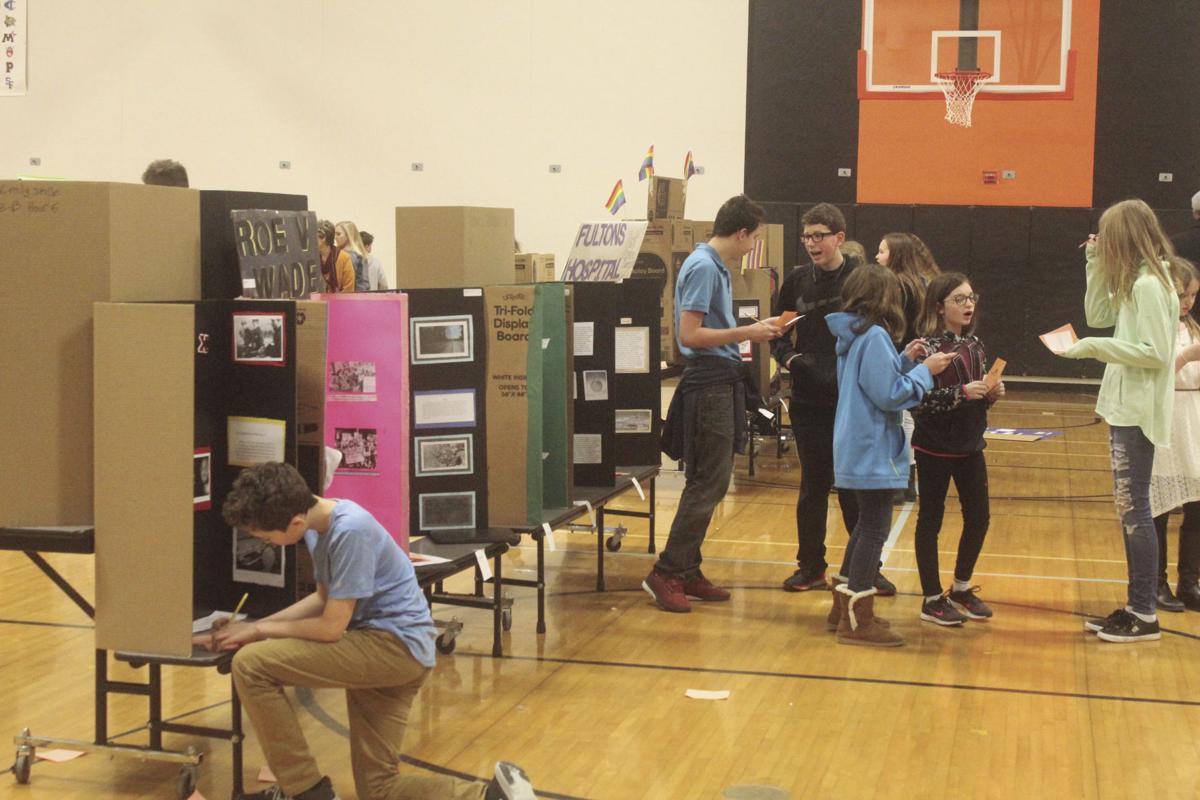 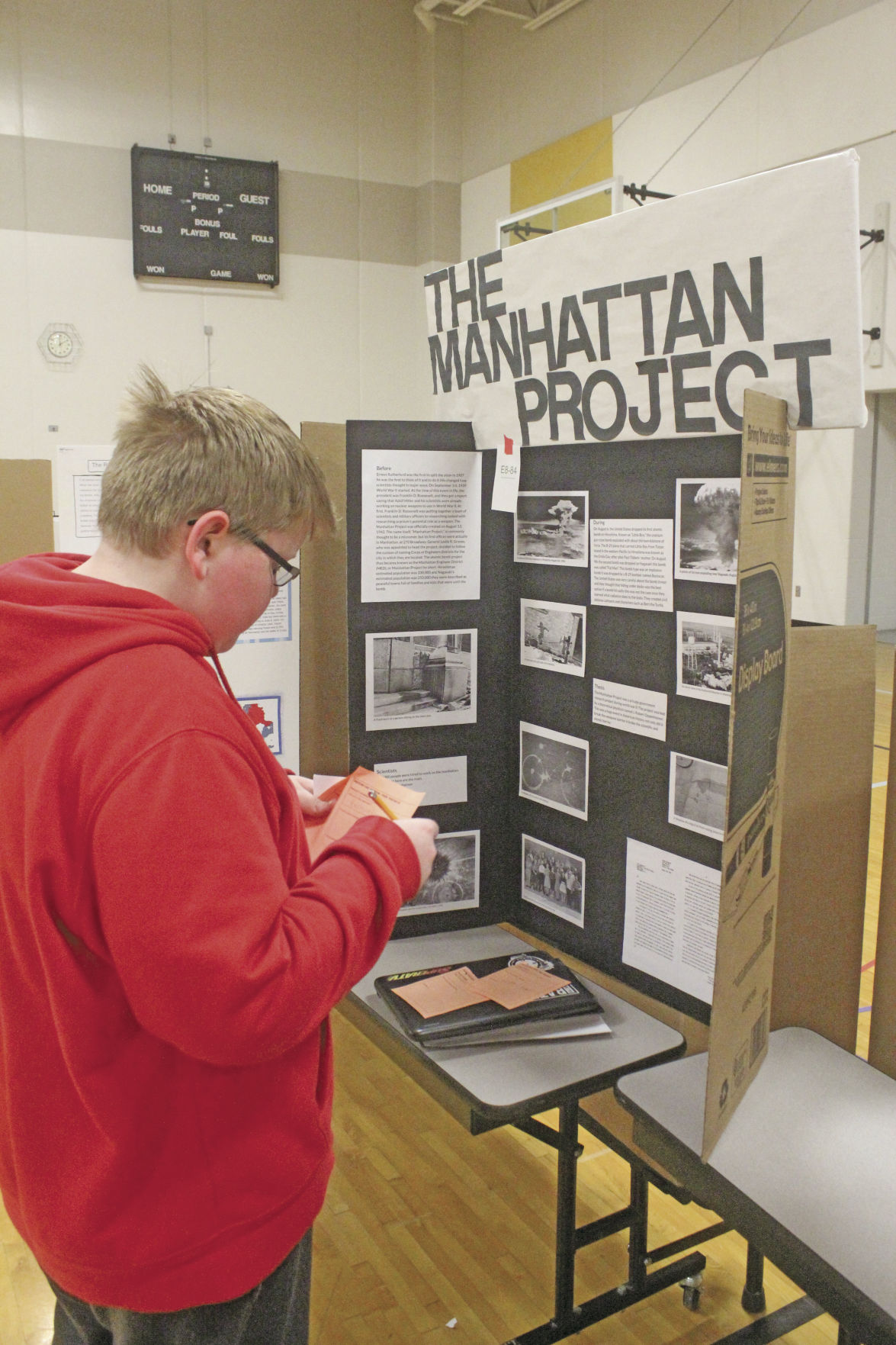 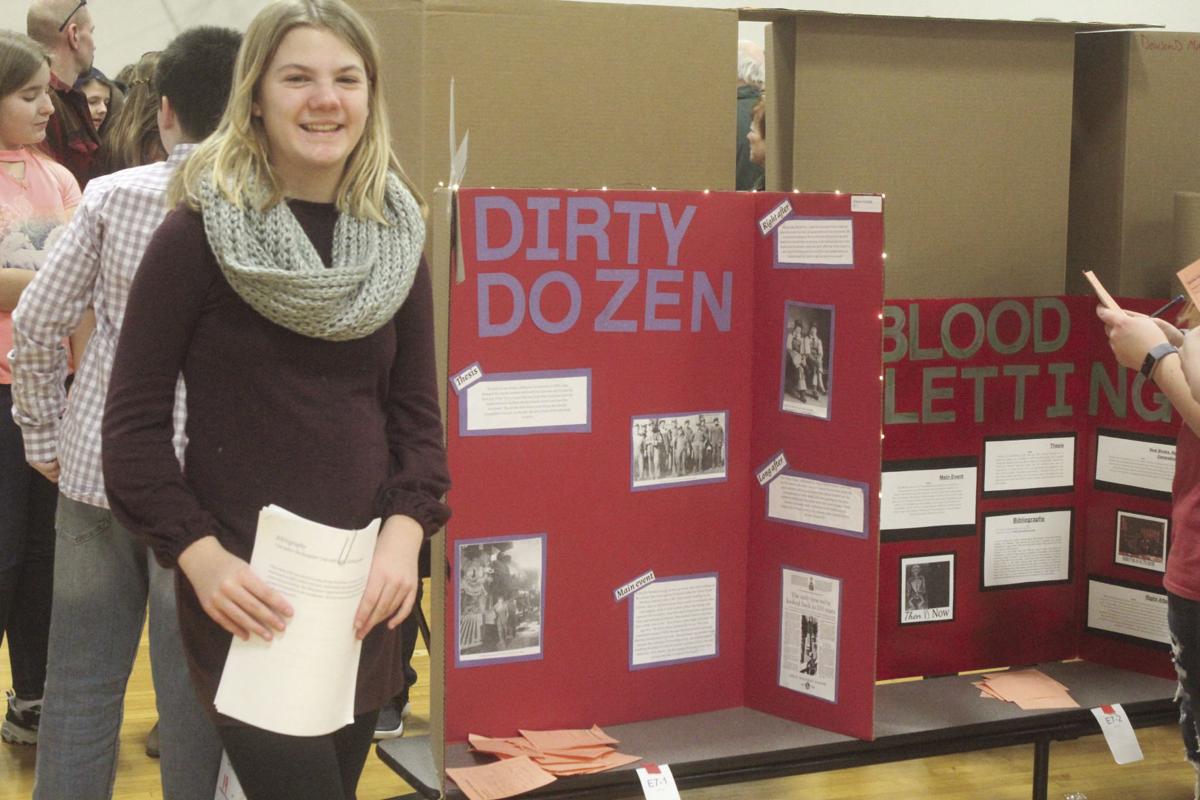 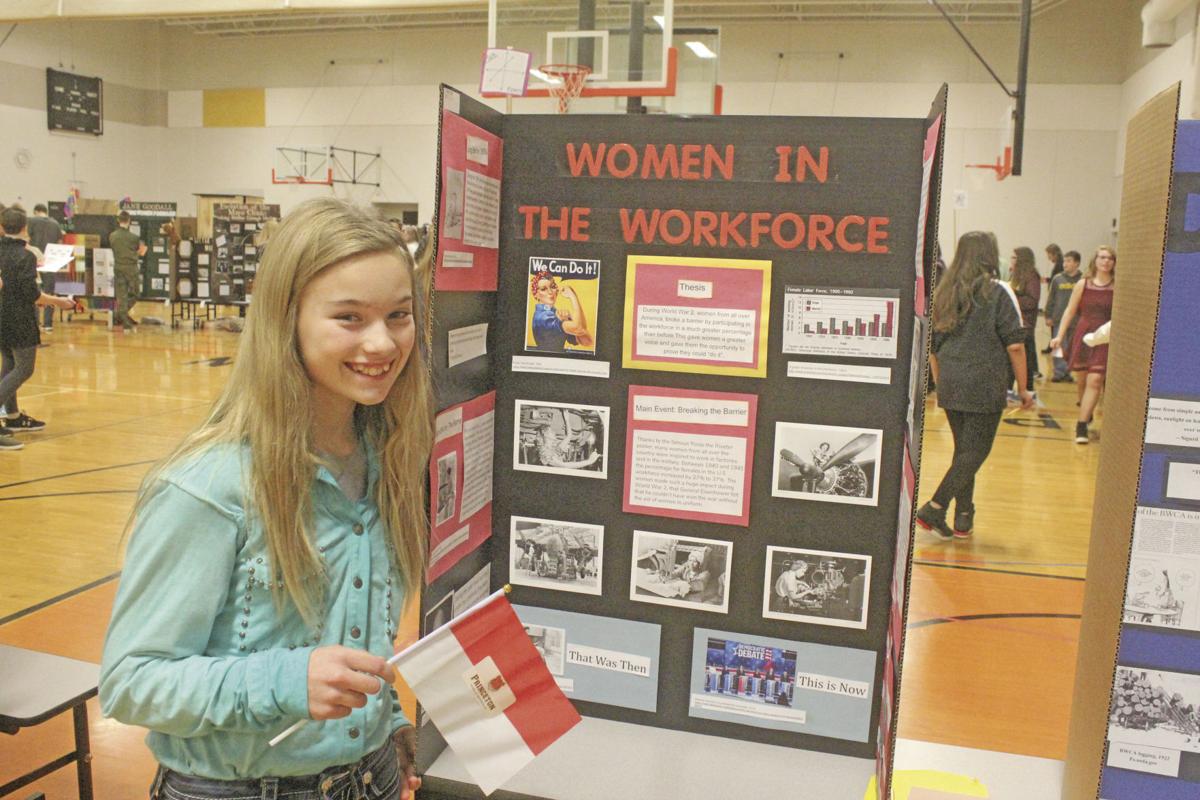 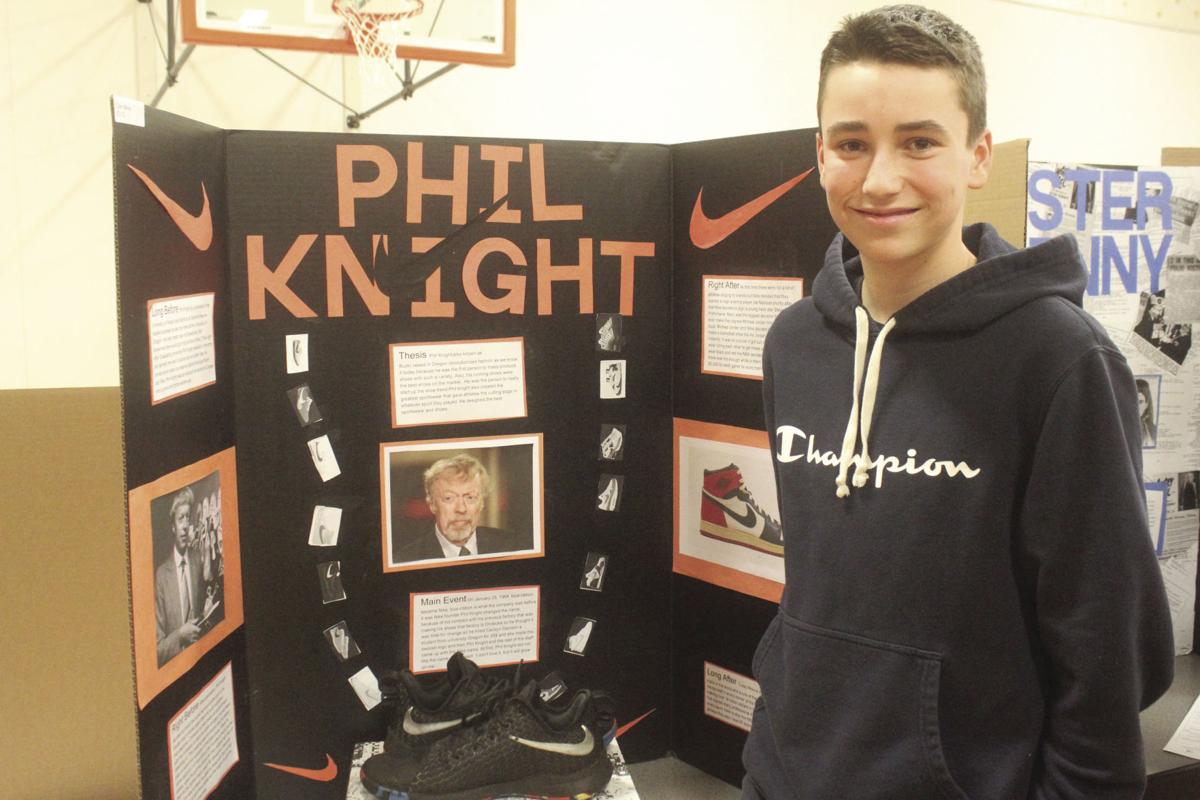 Olan Minks is a huge fan of everything Nike. So when it came time to choose a topic for Princeton Middle School’s annual History Day, he didn’t think twice.

Phil Knight is the CEO of the shoe and athletic apparel giant, and Minks dove into his history for the project.

The Princeton seventh grader had earlier read Knight’s autobiography, titled “Shoe Dog,” and figured this would be the perfect time to learn more about the man behind the swoosh.

“I read that book and my interested just exploded from there,” Minks said. “I wanted to keep learning more about him and how Nike started.”

Minks’ project was one of about 800 on display on Thursday, Dec. 19, as part of History Day at Princeton Middle School.

Minks’ Nike display included pictures of his favorite Nike items along with tidbits about the company’s history.

“I didn’t know he had a company before Nike called Blue Ribbon Sports,” Minks said. “He designed shoes there, but there were legal issues and it wasn’t doing very well, so he had to start all over again. So he created Nike. It was really fun project to work on. I love that we can choose whatever we want and find what we’re interested in.”

Dan Voce is the assistant principal at the middle school. A social studies major in college, he again was impressed at the level the students take their project.

“Every year there are quite a few topics or people that I’ve never heard of, so kids really do their research (and) come up with topics that are very impressive,” Voce said. “It always amazes me. The students really have upped their game.”

This year’s theme was “Breaking Barriers.” Students had to choose their project based on a related historical moment. They have the option of making an informational board for display, acting out a performance, or creating a website or documentary.

The school began inviting parents to History Day a couple of years ago, and they could be seen everywhere looking at students’ projects.

Voce said the lessons learned by the students go well beyond history.

“It’s really nice to see kids have an opportunity to shine on a public stage,” Voce said. “That’s one of the unintended positives of this. Kids are learning how to do some public speaking, how to present, how to take feedback from others and the ones that move on to regionals will keep working to improve their project.”

Each student stands by their project and is available to describe what they’ve learned to onlookers.

Seventh grader Alayna Hustad, battling a scratchy voice, had the opportunity to explain her project on the “Dirty Dozen” to her peers and community members.

“They were the first women to ever work on the railroad. Once the men that were working on the Great Northern Railway left for war, they thought they could do something because it hadn’t been worked on for a couple months,” said Hustad, who used six sources during her research. “So they started working on it and worked as engine wipers, yard workers, operated the turntables and inspired future generations to work on things men work on and show they could do the same things.

“I learned a lot. It was a really interesting topic. I thought it was really cool to see what our ancestors did and how we got the build-up to what our world is today. I had no idea about this before. I found it online and thought it would be a really interesting topic. It’s been a lot of fun. History Day is one of my favorite things we do in school.”

Sixth grader Clara Haas was inspired after learning more for her project, titled “Women in the Workforce.” She saw the famous picture of Rosie the Riveter, which represents the women who worked in factories and shipyards during World War II.

“The barrier back then was they were mostly just housewives and didn’t really have a voice,” Haas said. “Nowadays, they’re running in presidential campaigns and the stereotypical role is fully dissolving. I saw the Rosie the Riveter picture and wondered what it was about. I learned something new about each little section I worked on.”

History Day also is tied into regional and state competitions. About 40 Princeton students advanced to the regionals last year at St. Cloud State, and about 15-20 went on to the state competition at the University of Minnesota.