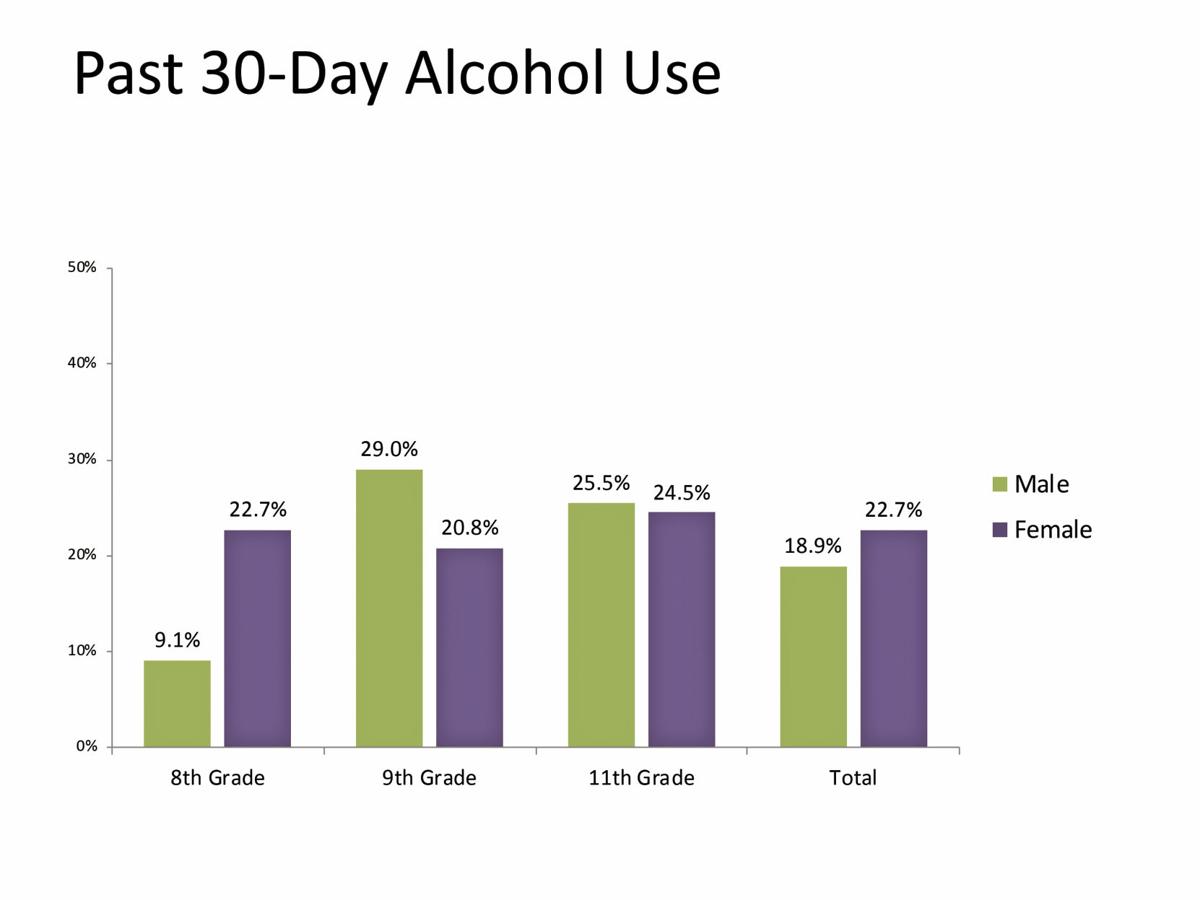 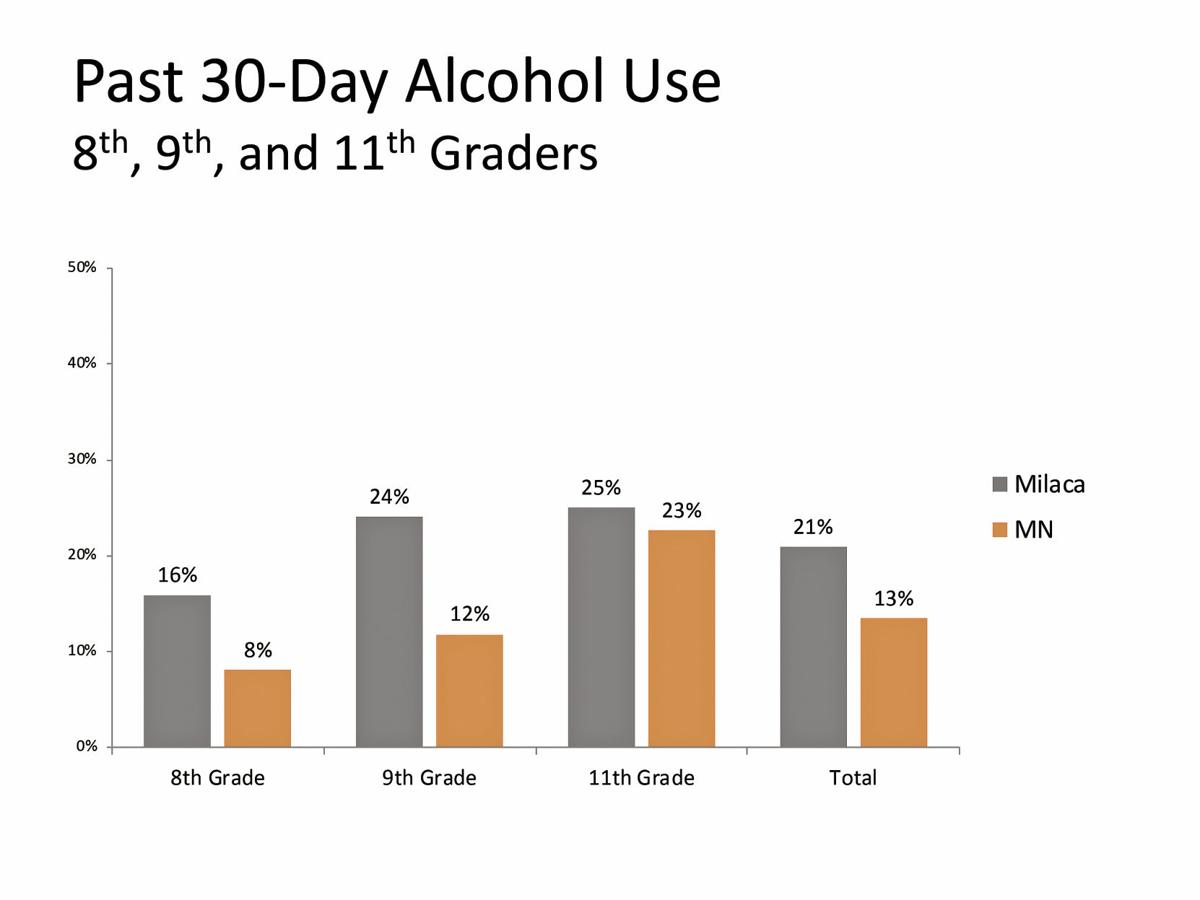 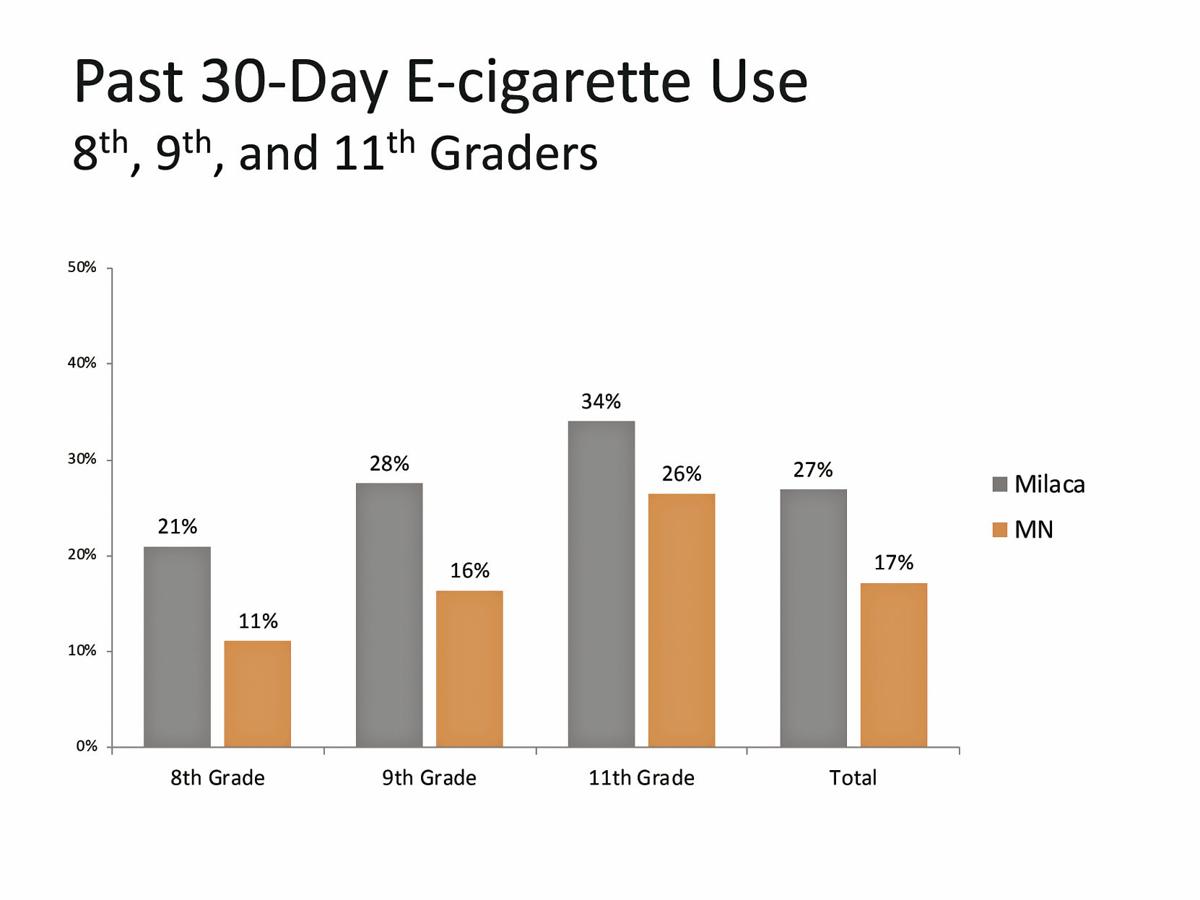 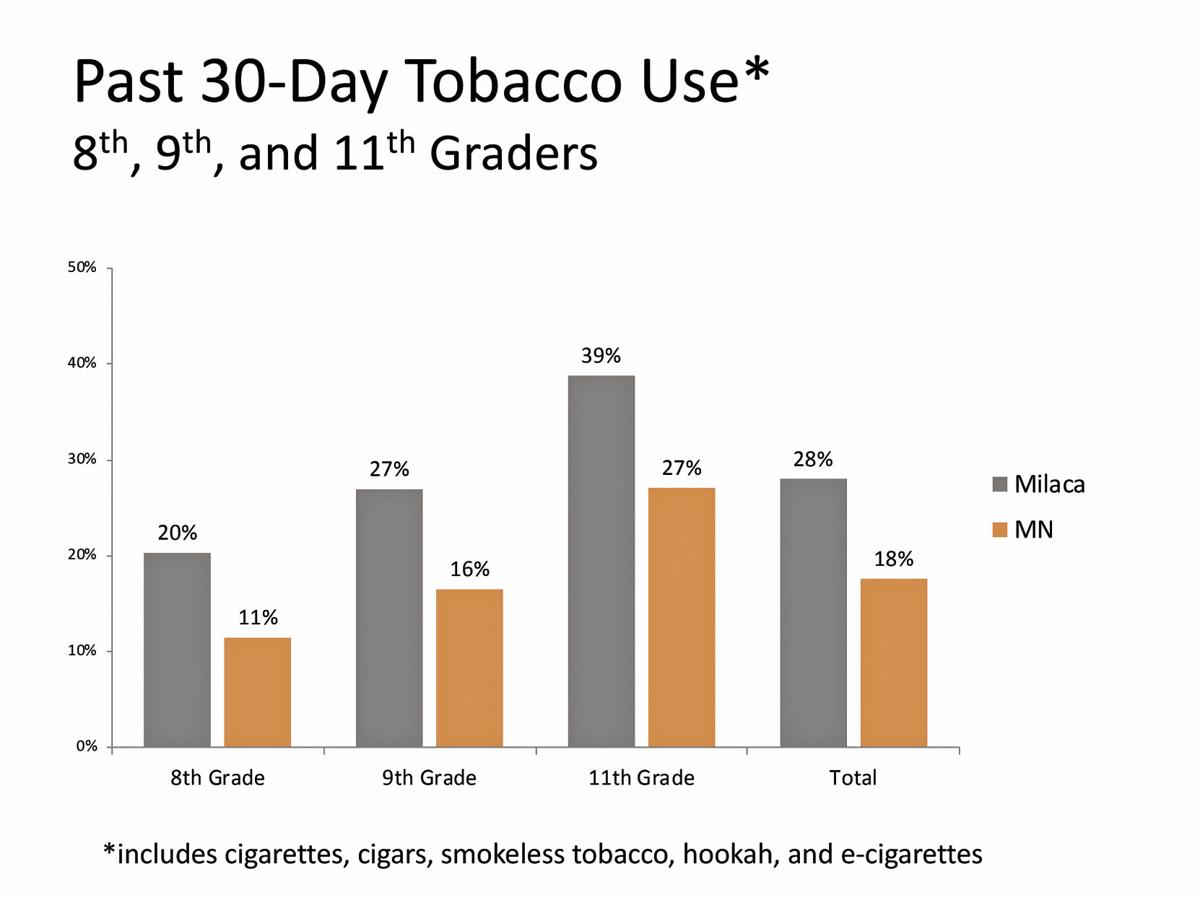 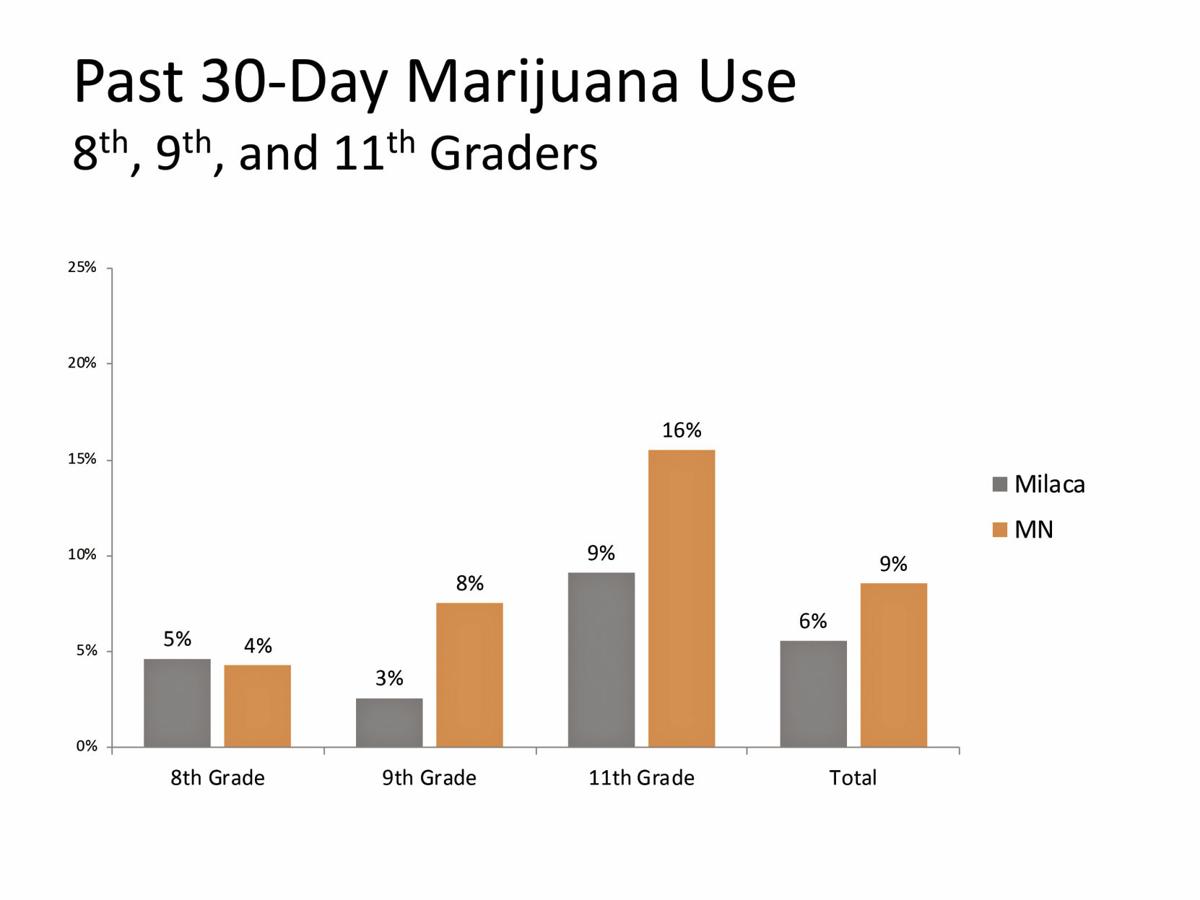 The results of a survey taken by students regarding substance abuse in the Milaca School District last year have been released, and while there is plenty of good news, school officials realize there is a lot of work to be done.

According to the survey, Milaca students reported 8% higher use rates over the state average when asked if they had used alcohol in the past 30 days, while vaping rates continue to skyrocket both locally and nationwide.

The survey is conducted every three years and is given to students in grades 5, 8, 9 and 11 – though the questions to fifth graders aren’t as extensive.

This survey was taken by Milaca students in March 2019 and is made possible through a Planning & Implementation grant received in 2013 with the goal to reduce student substance abuse.

The results were released and explained at Monday’s meeting of the school board by Amber Kent, prevention coordinator for the Milaca Community Coalition.

The survey is a collaboration between Minnesota schools and the state’s departments of education, health and human services, and public safety.

The entire report is available on the Milaca School District website.

“Obviously, we have work to do. The survey showed that, but it’s really not a huge surprise,” Milaca Public Schools Superintendent Tim Truebenbach said.

He added: “Obviously, our goals are to improve these percentages. But we have to meet the kids where they’re at, meet the community where it is at and do the best we can to address these with the resources that we have.

“We have a good ratio of people who help these students, so I think we’re set up for success. We need to work our systems and need to stick with our plans. We’re on the right track in terms of targeting certain things, but the truth is we need to keep at it.”

When it comes to alcohol, the survey revealed some eye-opening numbers, especially among females.

High school junior boys were at 25.5%, with girls in that grade at 24.5%. For all three grades, 18.9% of boys and 22.7% of girls reported to drinking in the past 30 days. All four of those categories are much higher than the state average.

“The one thing that sticks out for me is the (increase of substance abuse) by females,” Truebenbach said. “That’s one of the big spikes we saw.”

The use of e-cigarettes continues to be an epidemic, and Milaca students are vaping far more than statewide averages.

In eighth grade, 21% of Milaca students reported vaping in the past 30 days compared to 11% statewide.

Overall, Milaca students were at a 27% usage rate – 10 points higher than the Minnesota average.

School officials are working with city and county officials to help curb this issue.

Alicia Fussy of the Minnesota Department of Health is assisting through the Statewide Health Initiative Program, which every county in the state has. Kent said working together will be key to getting the vaping epidemic under control.

“First, I think (vaping) has a lot to do with marketing,” Kent said. “We’re working a lot with Alicia on this, and she’s got so much information and is so intelligent in that area. With vaping, it’s all marketed towards females, so when we see that spike, it shows the marketing is unfortunately working.

“These results help us keep a finger on the pulse of when we’re talking about creating action steps as to where do we need to put more of our efforts.”

The survey also included questions about marijuana, illicit drug use, adverse childhood experiences and depression and evaluated how they correlate with the rate of student substance abuse.

The obvious question is what the next steps will be to improve these numbers. A big part of it is implementing what is called “protective factors.”

These factors include empowerment, positive identity and social competence. To help with this, the school has three counselors available, along with people in positions such as Kent’s.

“Sometimes it’s hard to wrap your head around prevention. It doesn’t just happen overnight,” Kent said. “When you talk about action steps, we’re already doing some of these things. This information helps solidify the things we’re doing and give us some validity.”

Some protective factors examples include how much students feel their parents care, and how much they feel their teachers, staff and adults in the community care.

“This survey is able to pull out some of these protective factors that the more of these they can identify with. When talking about empowerment, positive identity and stronger social competency, they are less likely to use substances and have better mental health. The biggest thing we were able to pull out of this if they report higher empowerment, they’re X many times less likely to use unhealthy behaviors.

“When you get to social competence, that is one of the highest areas that when students report having these, that’s a great asset for them to be able to protect themselves from unhealthy behaviors.”

The ultimate goal, Kent said, is to collaborate with the county attorney, law enforcement, probation officers, student resource officers along with Brian Julson, Milaca’s activities director and dean of students.

Part of that involved implementing a diversion program where students who are caught vaping, drinking or using illicit drugs go through an educational process to teach them how to quit instead of putting them on a school suspension.

Overall, the data shows both positive and negative numbers, but Kent said it’s important to stay focused on improving in all areas.

“When we talk about some of this data, it can become doom and gloom and you start to worry,” Kent said. “So we always try to start with what is going good. Even though this is very alarming, most of our students are making good choices, are healthy and are successful. But we’re very concerned about those who aren’t.”