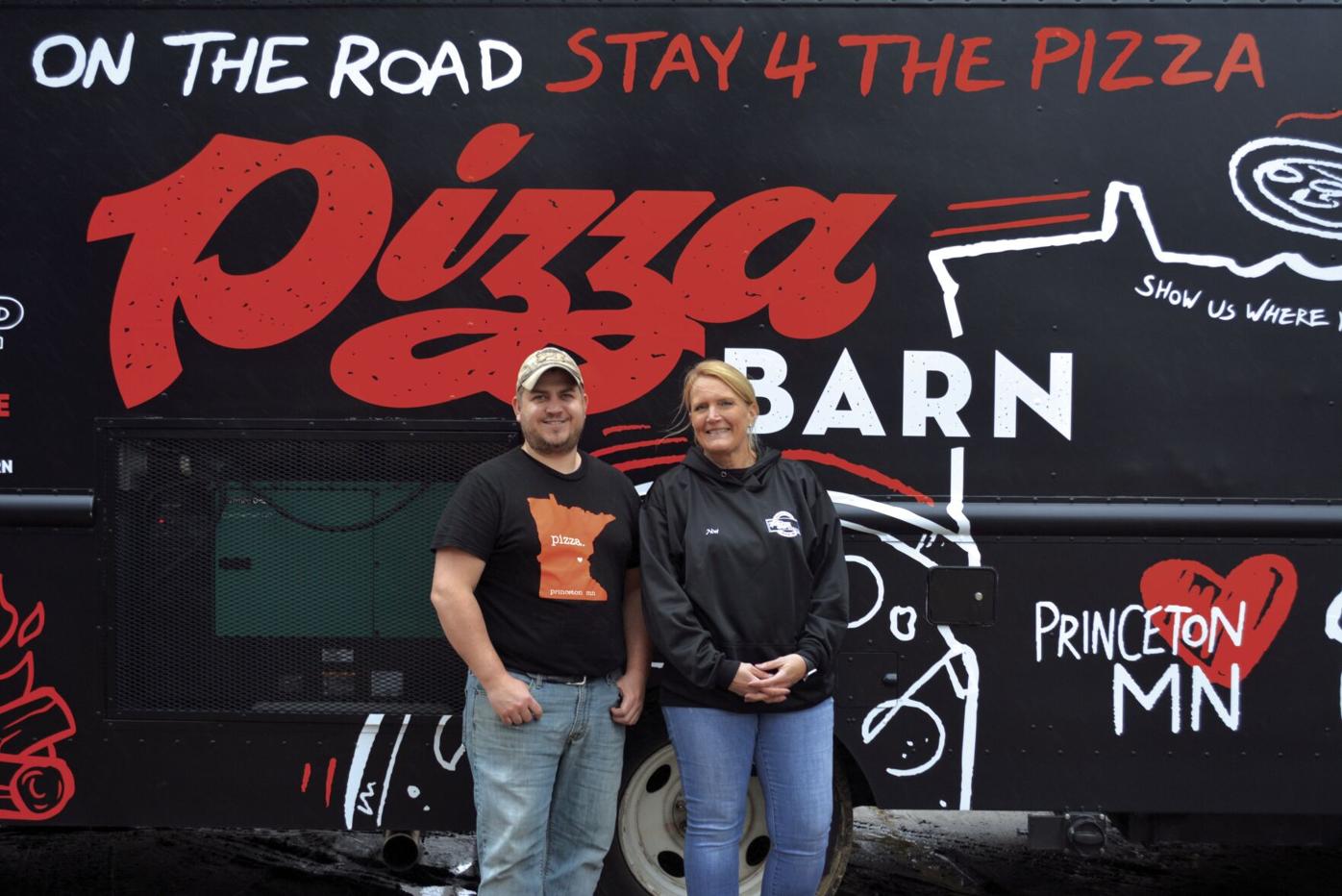 John Schwartz and Jody Stay are pictured in front of the new Pizza Barn food truck at an event at the Vintage Pixie on Friday, April 9. 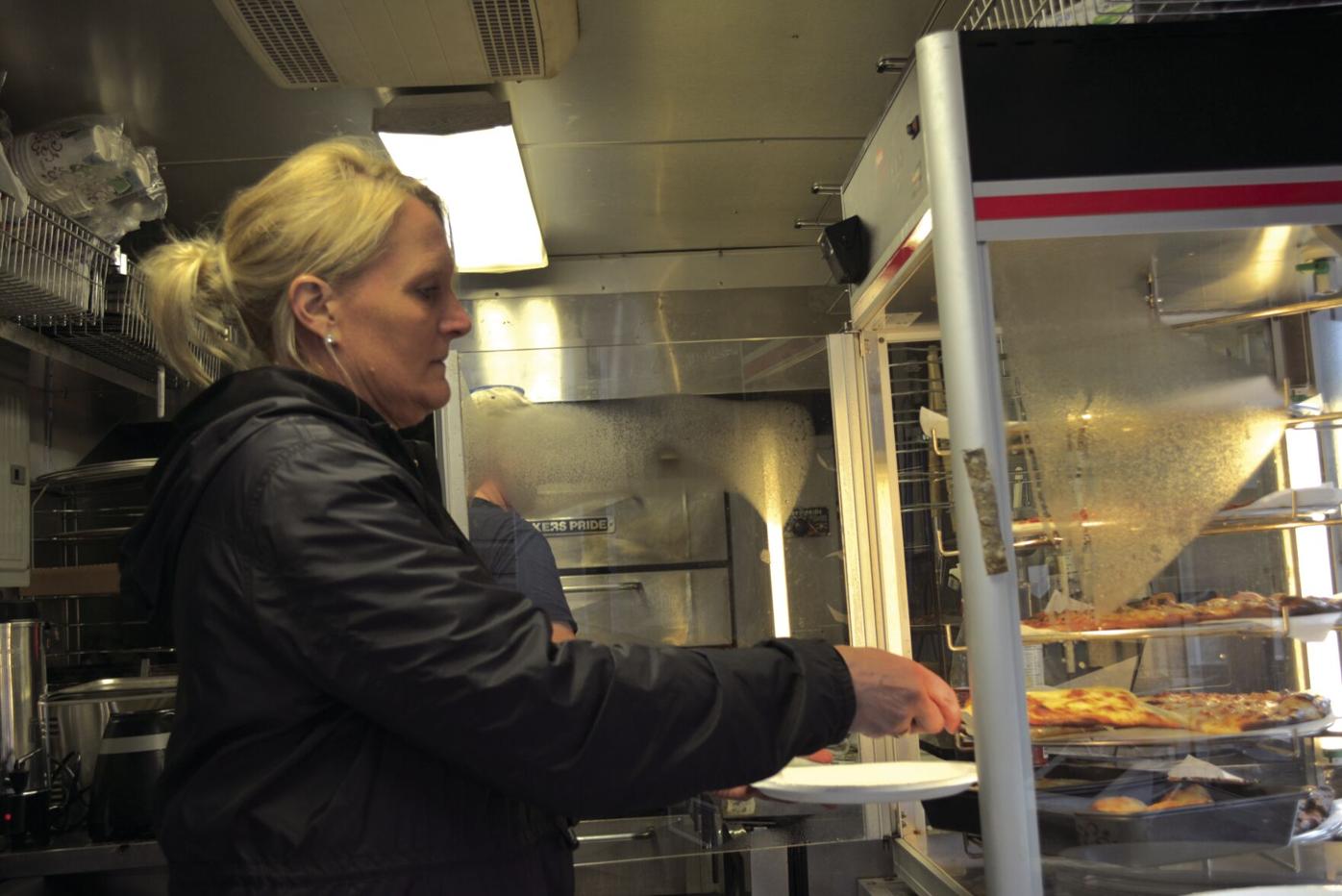 Jody Stay retrieves a slice of pizza for a customer while operating the new Pizza Barn food truck at an event at the Vintage Pixie April 9. 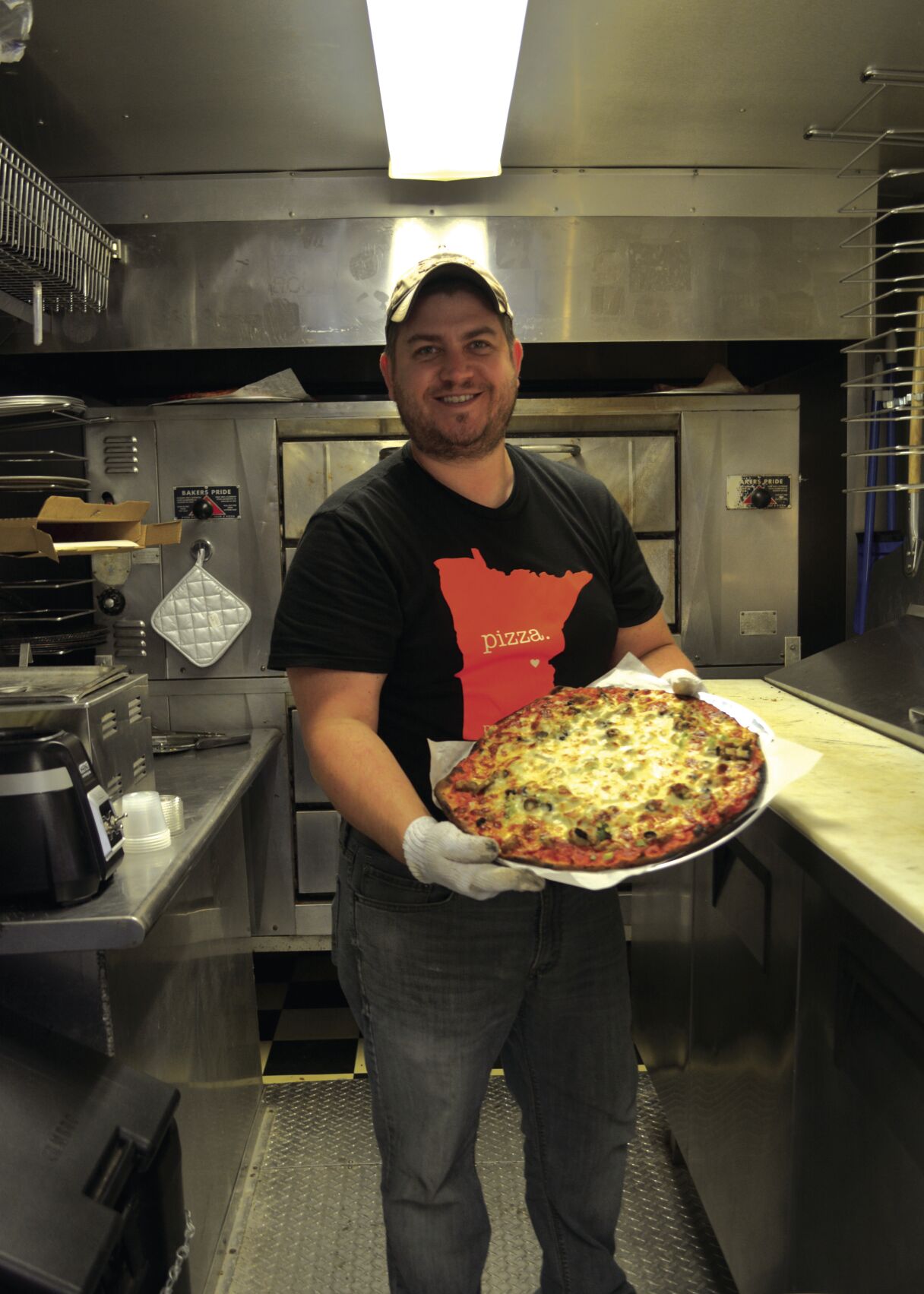 John Schwartz holds a pizza in the new Pizza Barn food truck at an event at the Vintage Pixie April 9.

John Schwartz and Jody Stay are pictured in front of the new Pizza Barn food truck at an event at the Vintage Pixie on Friday, April 9.

Jody Stay retrieves a slice of pizza for a customer while operating the new Pizza Barn food truck at an event at the Vintage Pixie April 9.

John Schwartz holds a pizza in the new Pizza Barn food truck at an event at the Vintage Pixie April 9.

Pizza Barn is coming to customers this year with the addition of a new food truck.

For three years, Jody Stay, owner of the Pizza Barn, has been planning on starting up her own food truck. Her initial inspiration came from serving a cheese curd pizza for pizza of the month. The man she bought the cheese curds from offered to help Stay get the pizza to a wider audience.

At the time food trucks were already popular on both coasts of the U.S. Stay learned that they were growing in popularity in the Midwest, with Minneapolis and Chicago being two of the fastest growing cities for the vehicles, she said.

“So you kind of just got the feeling that what was happening on the East and West coast was just kind of migrating toward the Midwest,” Stay said.

While the project marinated in Stay’s head, John Schwartz, who has been Stay’s partner in getting the truck up and running, ran into her when he wanted to thank the restaurant for giving out food during the pandemic. Stay was distributing free chicken dinners for the first 2 1/2 months of the pandemic. Schwartz, who is a competitive barbecuer, brought some of his barbecue to the restaurant for her staff to thank them for what they were doing for the community, according to Schwartz.

Schwartz is a member of the Minnesota Barbecue Society. He started competing at bars around Minnesota in 2017 and in 2019 he earned backyard team of the year. After tasting his barbecue, Stay and Schwartz made plans to collaborate on a pizza of the month using his product — resulting in the Schwonny Que pizza.

“It’s been one of our best-selling pizzas of the month, because number one it’s super good, number two he’s got a following and number three he’s a local guy,” Stay said.

After their collaboration, Stay mentioned to Schwartz that she was working on getting a food truck going, but the pandemic had delayed her plans. He said he could get it moving for her, Schwartz said.

He found a food truck in Michigan, where they flew out to pick it up and he drove over 12 hours to get it back here.

“I just put in my earbuds, listened to 12 hours of podcasts and called it a day,” Schwartz said.

After getting it back home, Schwartz and Stay had to make some adjustments to get the truck legal to sell food in Minnesota. After adding a sink, reworking the plumbing, upgrading the electrical and removing some old equipment, the truck was ready for its debut April 3, during the 2020 Business & Community Virtual Expo hosted by the Princeton Area Chamber of Commerce.

While the truck is sticking around Princeton for now to work out the kinks, Stay anticipates it will spend most of its future in neighboring communities.

“I foresee us out, away from Princeton more than in, which meets the objective that I had in the beginning to expose people outside this community to the Pizza Barn,” Stay said.

Physically the big challenge is working with the small space they have inside the truck, and once you’re out on the road, forgetting something behind can be a bigger problem. The pair also have to navigate the red tape of food truck regulations.

“The biggest obstacle is just working with the state for approval and waiting on that,” Schwartz said.

Along with getting approval from the state, the truck also needs to be approved by local cities and counties. But all of those rules can vary between communities, so it is a challenge to figure who has to approve them before the truck can setup somewhere, according to Schwartz.

“It’s a lot of hurry-up-and-wait kind of things,” Schwartz said.

It is common to see cities regulate how often a food truck can do business within its borders.

“What I’ve come to realize is a lot of these municipalities have guidelines for how much you can operate within their city limits, because they want to protect their own brick-and-mortar (stores),” Stay said. “Which I can appreciate because I sure wouldn’t appreciate a food truck, especially a pizza food truck for example, parking out in our parking lot — which is a city-owned parking lot — and operating right in front of our doors. I mean the city’s got to protect their brick-and-mortars first.”

A fleet on the horizon

Stay and Schwartz have big plans for the future. Currently the pair are planning to add a smoker to the Pizza Barn. That would allow Schwartz to serve his barbecue both in the restaurant and on the truck. That may start as using his smoked meats as toppings on the pizzas, but Stay is open to serving Schwartz’s barbecue as standalone entrees — particularly when catering events.

This truck may be only the first of many. Within just over a week into offering their truck, the restaurant already had to turn away bookings due to a packed schedule, according to Stay.

At this point, saying they need another truck has become a running gag between the two business partners.

“I see the truck we have right now as a prototype for a fleet,” Stay said. “That’s my ultimate goal.”

While the fleet of food trucks may still be on the horizon, customers can find the schedule of the current truck online at pizzabarnprinceton.com by clicking on the food truck icon. From there customers can find a schedule, request to book the truck and even order takeout online when it is in their area.