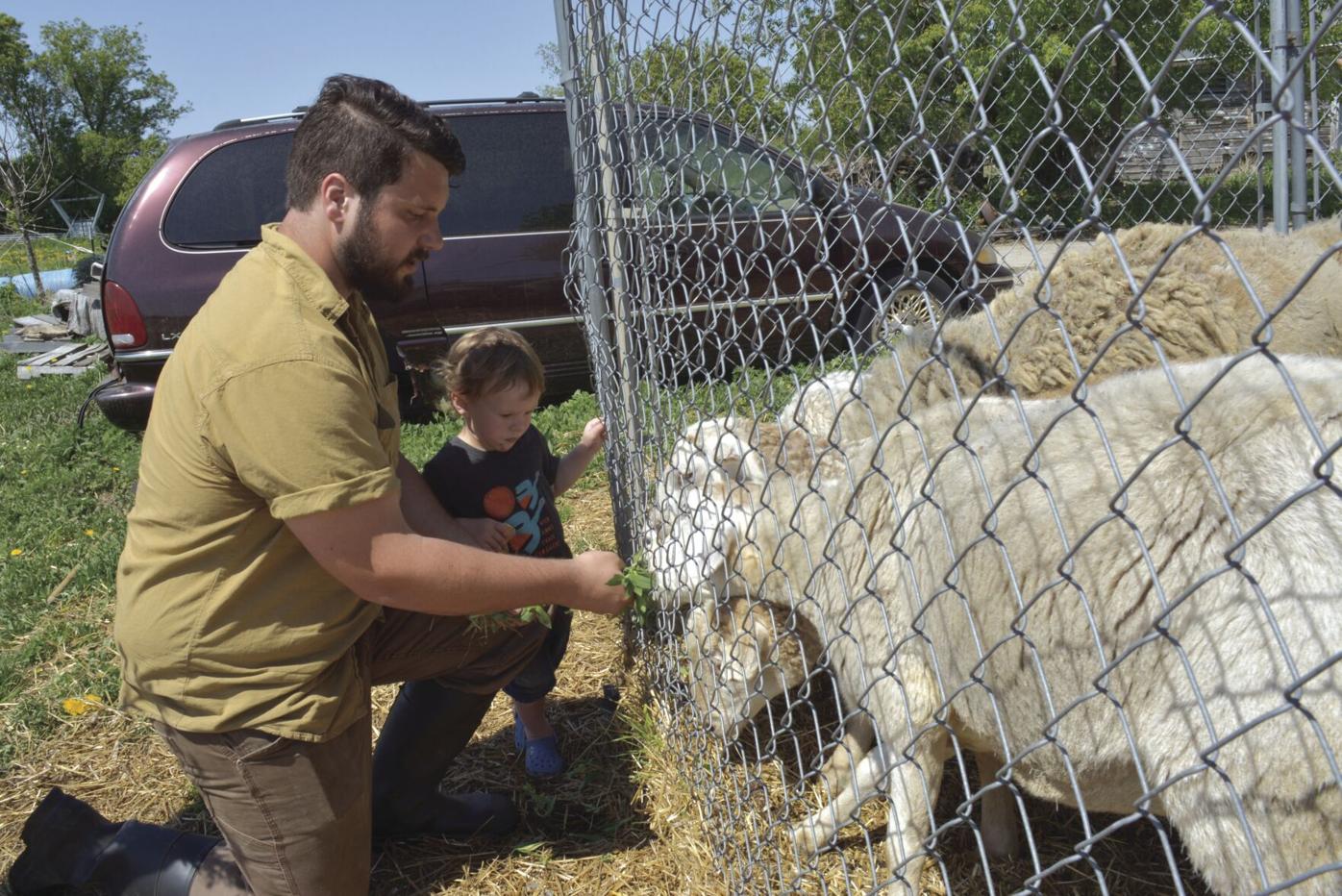 Christopher Phillips and his 2-year-old son Walden feed their sheep in the permanent pen they’re kept in during the winter. 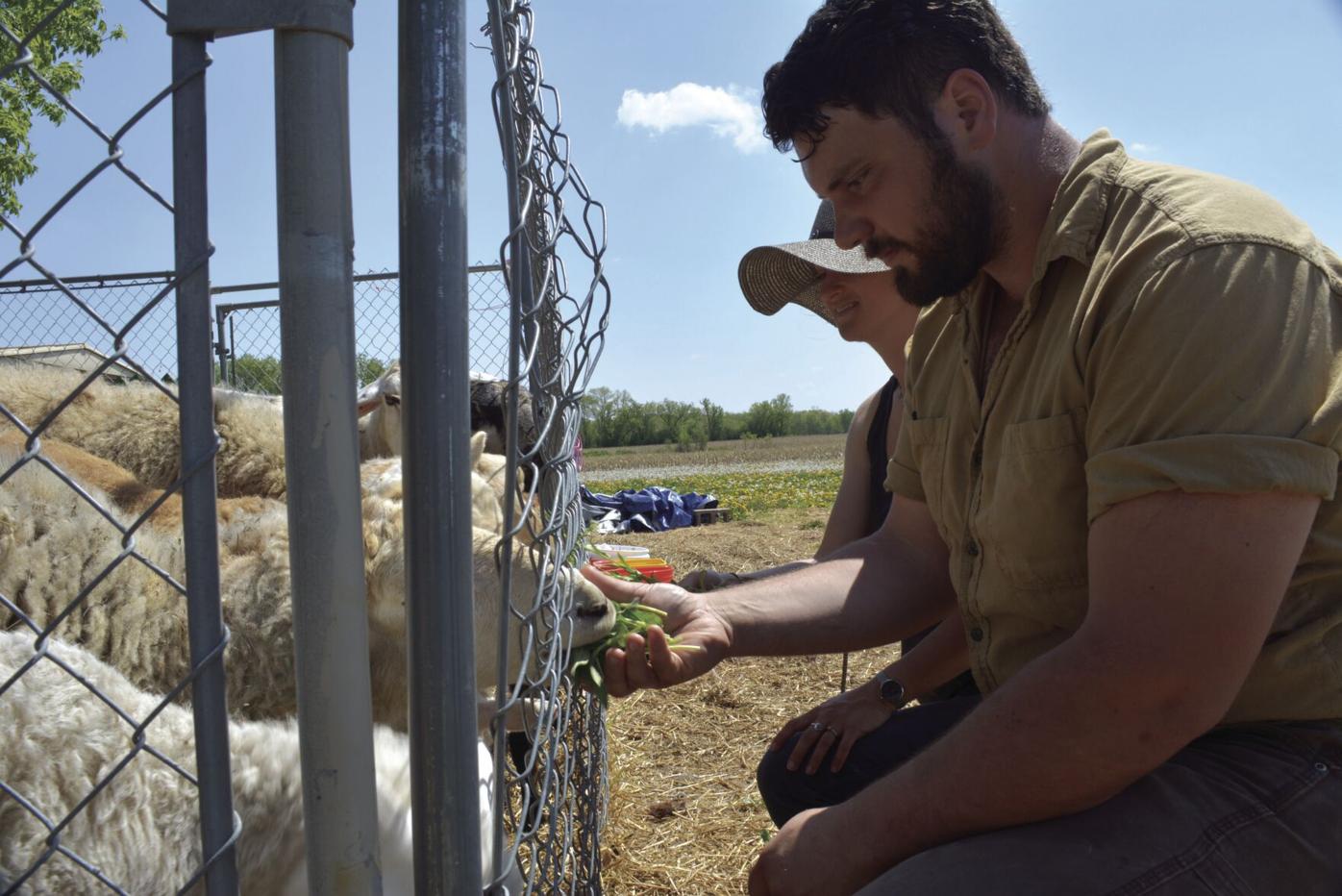 Emily and Christopher Phillips feed sheep in their permanent pen the sheep spend winter in. 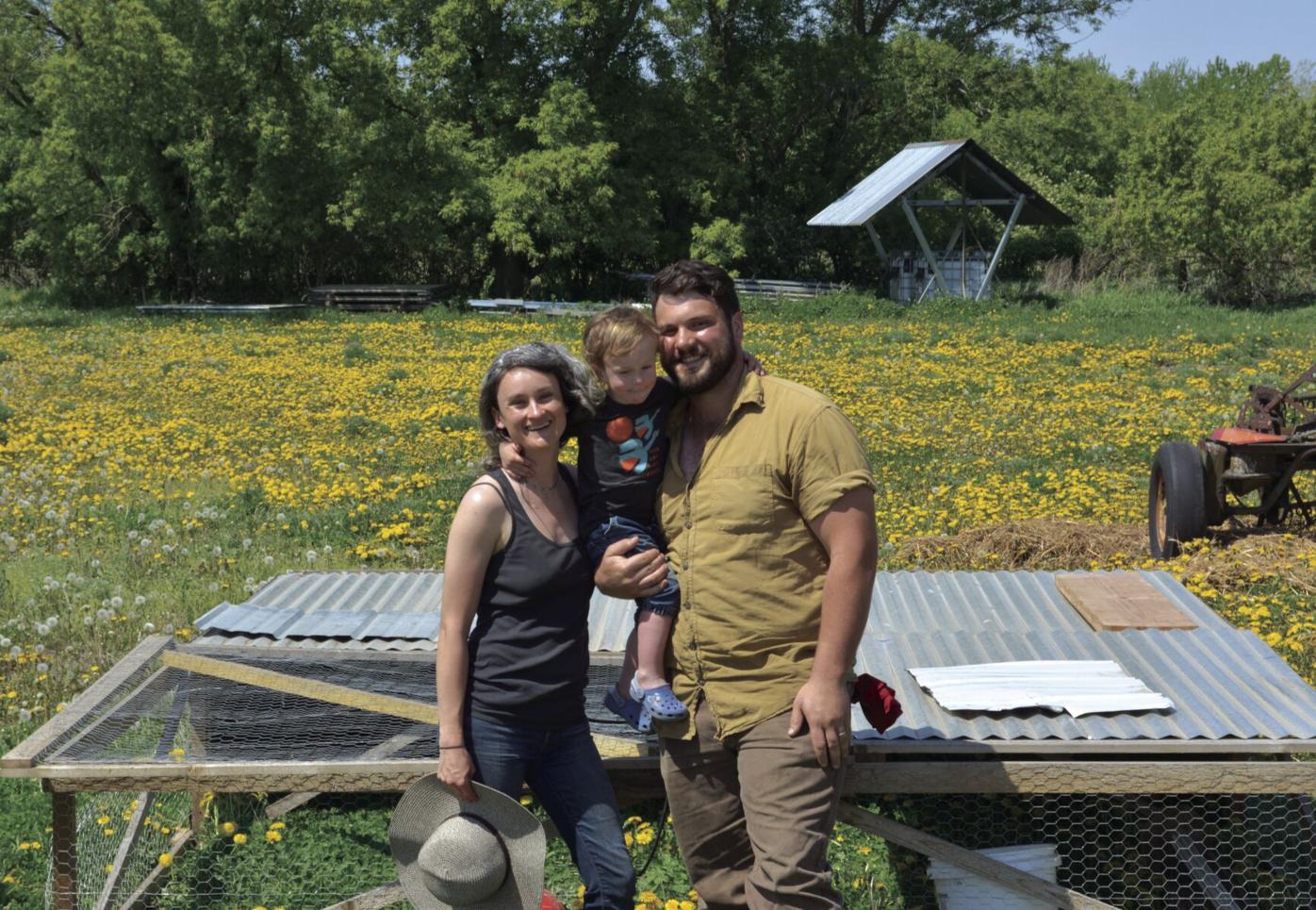 Emily and Christopher Phillips hold their son Walden, 2, while standing in front of an empty chicken tractor on the Phillips Farmstead.

Christopher Phillips and his 2-year-old son Walden feed their sheep in the permanent pen they’re kept in during the winter.

Emily and Christopher Phillips feed sheep in their permanent pen the sheep spend winter in.

Emily and Christopher Phillips hold their son Walden, 2, while standing in front of an empty chicken tractor on the Phillips Farmstead.

A new farm looking to help improve the health of the ecosystem while providing locally-raised food moved to the Princeton area recently.

The Phillips Farmstead is a new local farm selling chicken and lamb it raises using farming practices aimed at renewing the nutrients in the soil.

The couple who own the farm, Christopher and Emily Phillips, describe their practices as “regenerative” farming. While sustainable farming techniques, such as cover crops and less tilling, are becoming more popular as ways to mitigate erosion and nutrient depletion, regenerative practices go a step further and begin rebuilding the nutrients in the soil, according to Christopher.

“We’re actually in the business of building soil,” Christopher said.

Regenerative farming practices include a variety of techniques such as no-till or minimum tillage, rotational grazing and crop rotation, with a focus on maintaining soil health, according to the Rodale Institute, a nonprofit leader in organic agriculture.

For the Phillips, the practice means creating an agricultural system that encourages biodiversity and produces a variety of products. Though for now that is limited to chickens and sheep.

“Our farming is less about producing a single product and it’s more about the system we’re creating and how many different things can we produce using one system that’s all working together,” Emily said.

“The magic of biodiversity and stacking enterprises is you get more off of a given amount of land and it’s better for every enterprise individually,” Christopher said.

The method also helps reduce the risk involved when investing in a new farm, because not all of their eggs are in one basket, according to Emily.

The Phillips hope that by running a transparent farming operation, customers will feel comfortable buying meat because they know it was raised humanely, according to Christopher.

“You should not feel guilty buying meat, and I think that there can be a twinge of guilt buying meat at the grocery store because you see all these things about factory farms and slaughterhouses and inhumane practices and you kind of shove it into the back (of your mind) because you want to buy some steak for dinner,” Christopher said.

So far the couple offers chicken and lamb. They produce chickens about every five weeks during the warm months of the year.

“Because we raise them on pasture, that means we can’t do what we are doing with chickens through the winter,” Christopher said. “We require forage and mild temperatures.”

The chickens stay in a brooder house for the first three weeks after hatching, where they are sheltered from adverse weather and predators. Once the chickens are mature they are placed in “chicken tractors” — low pens that the Phillips can move every day to give the chickens new grass to feed on.

The Phillips use a similar method for the sheep they raise. In the winter the sheep are kept in a three-sided shelter with deep bedding to keep them warm and healthy.

“We put a lot of carbon material, which can be straw or wood chips or whatever, but anything that can absorb the nitrogen in their manure,” Christopher said. “We pack it really deep so it locks in all of their manure. It keeps it really sanitary for them and it also captures all of the fertilizer benefit of their manure and stabilizes it.”

That bedding and manure is then dug out and composted into fertilizer for the pastures, according to Christopher.

“Our goal is to try to rebuild the soil and try to avoid practices that cause soil erosion or runoff,” Emily said. “We don’t use any chemical fertilizers; that’s why it’s important that we manage their manure.”

The sheep are released into a pen of temporary fencing, where they can graze for the day. Then the Phillips will set up a second pen and move the sheep over to get at new grass. By rotating where the animals graze every day, the Phillips allow the plants the animals eat to grow back. The rotation also helps the soil absorb the animal’s waste and reduces the risk of parasites.

“That is simulating the way that the soils and the natural prairies were built here with dense herds of bison and elk and deer that were grouped up tightly from predator pressure and moved throughout the landscape where they would put a heavy impact on one area and then they would be gone for months,” Christopher said.

That movement of grazing herds is part of what built the rich soil of the Midwest, according to Christopher.

Rotating sheep then chickens through their pasture is where the Phillips are able to “stack” different types of livestock, because chickens and sheep eat different things and impact the land in different ways.

Using the chickens to sanitize the pastures, and moving animals regularly, helps prevent the farm from needing to use antibiotics or other medicines on their animals, according to Emily.

These techniques aren’t new. Emily pointed out what they do is basically going back to farming methods of past generations, instead of using the advanced farming technologies, monoculture (the cultivation of a single crop on a farm) and chemical additives that have been popular in more recent decades.

The Phillips met in college in Cleveland, Ohio. Christopher grew up in the Twin Cities area and Emily grew up near Los Angeles. After they graduated they went to California and ended up working in architectural fabrication.

Due to a variety of reasons, including a child, job loss, a desire for more meaningful work and the draw of nature and the outdoors, the couple decided to move away from the city and begin working on their regenerative farming practices.

“This is not where I saw myself ending up, you know, processing chickens and caring for sheep,” Emily said. “But I have to tell you, doing work that you believe in for the health of your family and your community — it really is a new kind of reward.”

Christopher had initially considered taking over his family farm, where he had spent may childhood summers. It had been owned by his grandparents and at that time was run by his uncle.

Instead Christopher followed an idea of homesteading — where his labor resulted in directly fulfilling the family’s needs. The couple started with a trial run on a half-acre owned by Christopher’s parents last year where they raised chickens for meat as a proof of concept.

In the near future the Phillips hope to begin offering freshly roasted coffee, which Christopher learned how to do while working for craft coffee roasters in Cleveland, he said. A little further out the couple also hopes to begin selling eggs, once their flock of laying chickens is large enough to produce enough eggs to feed themselves and sell.

Christopher also aspires to having beef cattle on the land eventually as well, but it may take awhile before that dream becomes a possibility.

Customers can preorder chicken and lamb from the couple online or learn more about the farm at phillipsfarmstead.com.