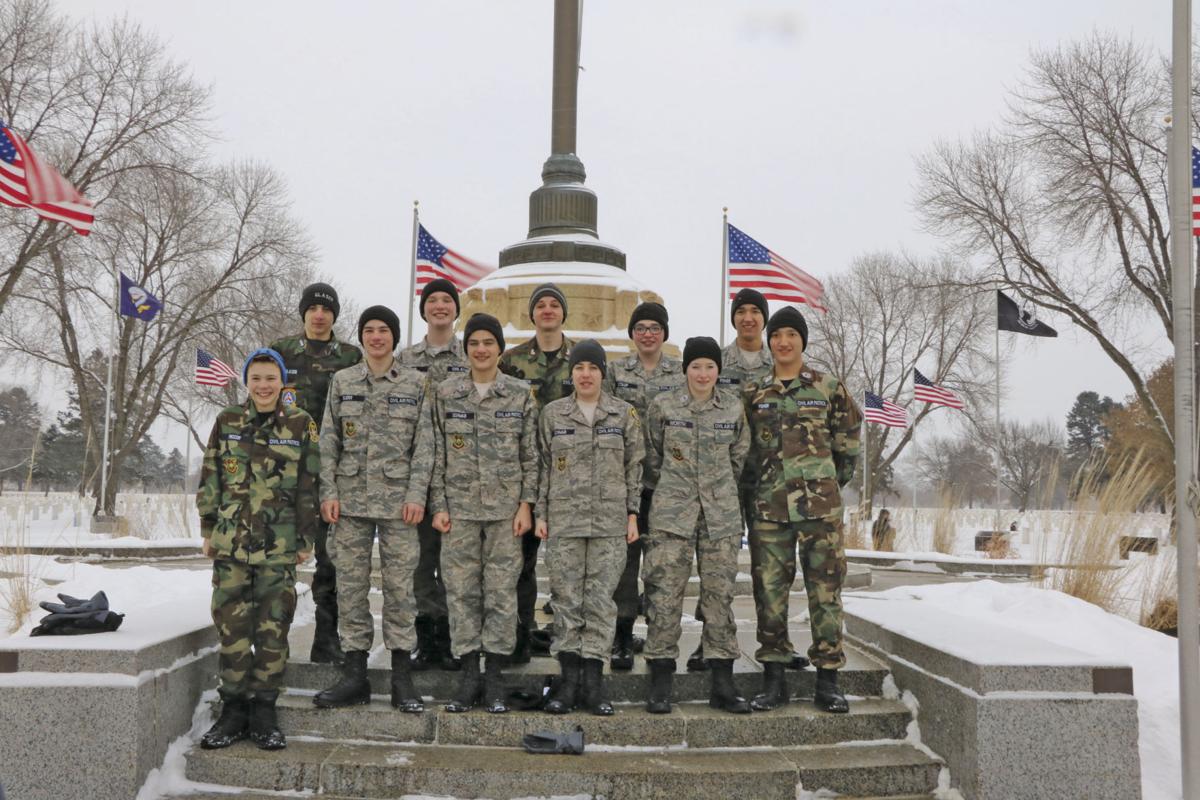 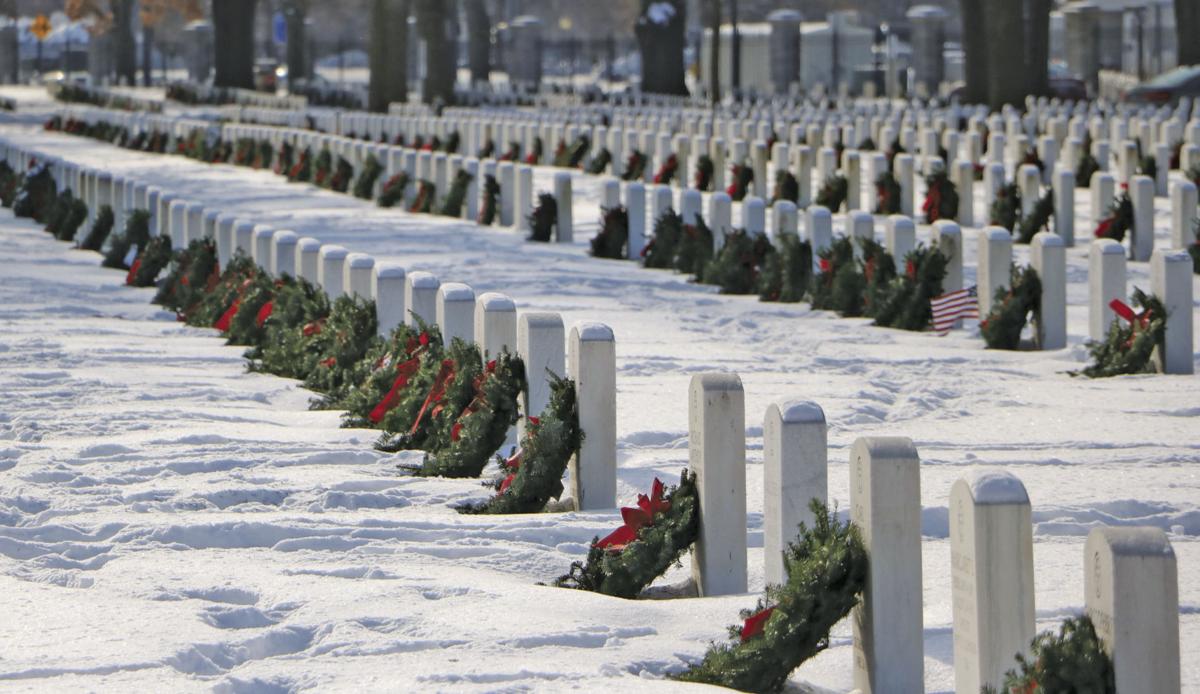 Every year, the Civil Air Patrol partners with Wreaths Across America to purchase wreaths that are placed on the graves of the country’s fallen heroes.

This year, National Wreaths Across America Day was conducted on Saturday, Dec. 14 with a ceremony at Fort Snelling hosted by the Civil Air Patrol. 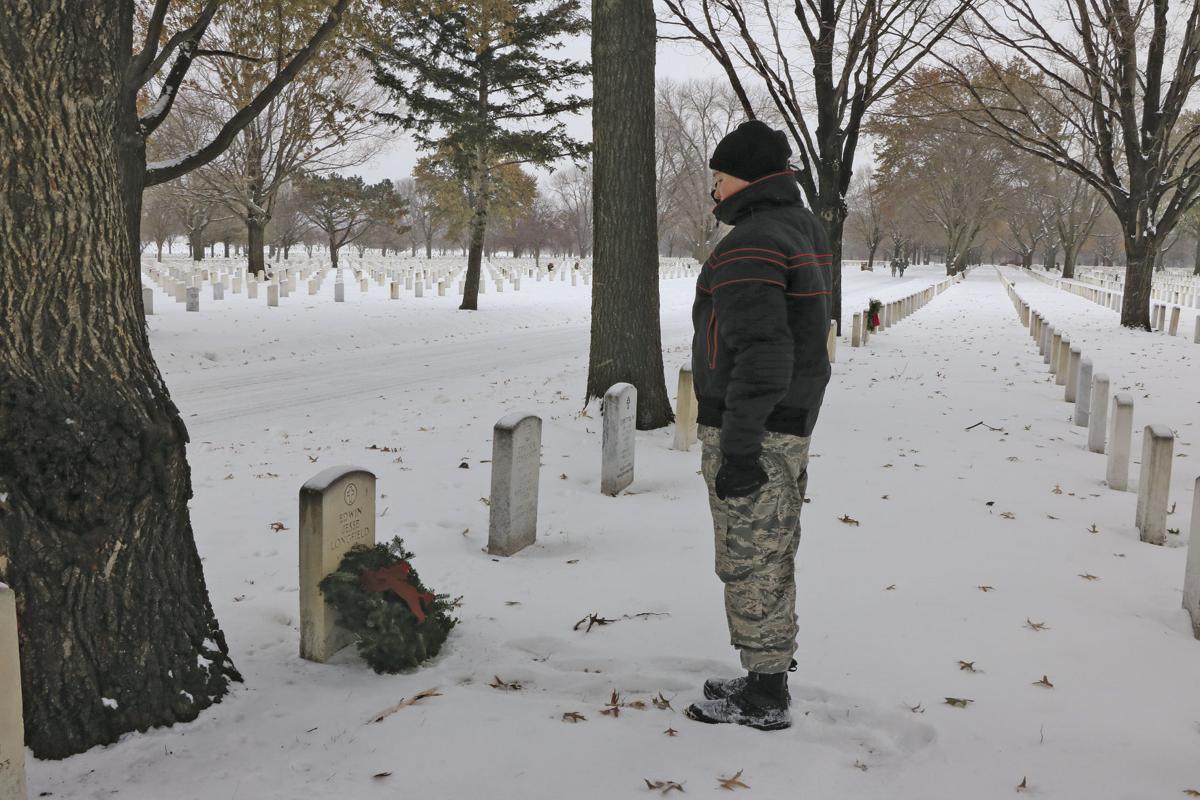 Civil Air Patrol Cadet Staff Sgt. Aiden Staup from the St. Cloud Composite Squadron salutes after placing a wreath on the headstone of Edwin Jesse Longfield, who served in World War II as a medical department corporal. Longfield is the father of Foreston Mayor Thomas Longfield.

Every year, the Civil Air Patrol partners with Wreaths Across America to purchase wreaths that are placed on the graves of the country’s fallen heroes.

This year, National Wreaths Across America Day was conducted on Saturday, Dec. 14 with a ceremony at Fort Snelling hosted by the Civil Air Patrol.

The Civil Air Patrol U.S. Air Force Auxiliary is a volunteer organization comprised of cadets ages 12 to 20 and senior members age 21 and above. The CAP’s core values include integrity, volunteer service, excellence, and respect.

The cadets, along with many others from their squadron, worked hard to make this a successful event.

Overall, the squadron ended up with donations for over 1,000 wreaths that were placed at Fort Snelling.

Lauren Staup and Aiden Staup were joined by their mother, Leah Staup, who is also a member of the Civil Air Patrol, serving as a second lieutenant.

The area three CAP youth members raised more than $5,700 in donations to support the wreath placement effort, selling 380 wreaths out of the 1,083 wreaths placed by the St. Cloud Composite Squadron of the Civil Air Patrol.

“We got quite a few $150 donations from local businesses,” Leah Staup said. “There were a lot of $15 personal donations.”

The Staups have lived in the Foreston area for about six years. Leah’s father and grandfather both served in the military, as well as her husband Scott’s father.

“We don’t have that many personal connections to the community, and we don’t get to see our relatives that frequently,” Leah explained. “We feel honored to be able to participate in this kind of activity locally, to be able to honor the memory of everyone who has served and given their lives in service our country.”

Aiden Staup said he placed about 15 wreaths, including a wreath on the headstone of Edwin Jesse Longfield, who served in World War II as a medical department corporal. Longfield is the father of Foreston Mayor Thomas Longfield.

“This year was my first year, and it meant a lot to me,” Aiden said. “A lot of young kids don’t honor veterans, but this year, I was able to support the veterans who gave their lives in service of their country and to protect our freedom.”

Aiden explained that the wreath placement process involves several steps. The wreaths have to be fluffed a little bit after they are removed from the storage truck, and must be carefully placed on the headstone, clearly leaving the service member’s name visible.

“We move back, stand at attention, and pause a few seconds. Then we place the next wreath,” Aiden said.

One of Lauren Staup’s duties, along with Kristin Worth of Milaca, was assisting the younger cadets during the wreath placement process. She also placed personal wreaths that were requested during the donation collection process.

“When we were selling wreaths in Milaca and the other communities, and we asked for donations, Lauren said. “I thought it was really cool that everyone who participated took time out of their day to come down and lay all of the wreaths. It was amazing how quickly it all got done because everyone worked together.” Lauren and Kristin also visited Princeton and Pease during their wreath-related trek for donations. Leah and Aiden visited the St. Cloud area.

This group placed special request wreaths by driving around and finding where each grave was located.

“We need to remember that our freedom came with a price,” Schwab said. “We may not know the person whose grave we are laying a wreath on, but that doesn’t mean we can’t thank them for their service or honor them with this small gesture.”

Schwab added that the National Wreaths Across America Day is a great way to teach the next generation about the value of service project involving community and country.

“These cadets trudged through snow on a very cold day to lay the wreaths,” Schwab said. “No one was forced to attend. It was all volunteer. I hope and pray that these and other cadets will continue this tradition.”