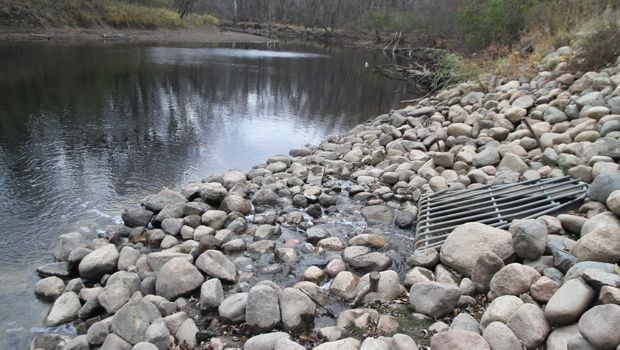 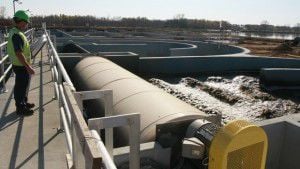 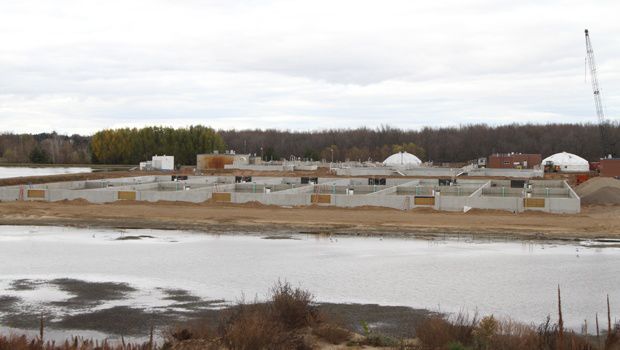 A view of the newly-expanded wastewater plant, looking north last Friday. The concrete structures in foreground are new and will holds beds of reeds, grass-like plants that are supposed to break down sludge that accumulates during wastewater treatment.

A view of the newly-expanded wastewater plant, looking north last Friday. The concrete structures in foreground are new and will holds beds of reeds, grass-like plants that are supposed to break down sludge that accumulates during wastewater treatment.

If you were canoeing downstream on the Rum River in Princeton you might notice, since last year, a new feature along the western shore of the river nearly a mile south of the golf course.

Prior to the discharge into the river, the plant was discharging its treated wastewater into two ponds, or lagoons, that can be seen from the south end of the golf course. The water in those lined ponds would eventually seep into the groundwater. The rules governing the quality of that treated wastewater were not as high as they are for the expanded plant, says Tracy Ekola, engineering consultant with the engineering firm SEH.

The first time the city ever had a mechanical treatment plant for treating its wastewater was starting in late 1995, when the plant was completed. Prior to that, the city’s wastewater just went into a lagoon system and every spring a rotten-egg odor would waft up from the lagoons and across the city.

Jump forward to about 10 years ago, and city officials could be heard deciding that the 1995-era treatment plant would run out of treatment capacity as the city developed. The city council hired SEH to work on a proposed treatment plant design to bring to the Minnesota Pollution Control Agency (MPCA) to approve.

But it took more than five years of fits and starts for the city to get the final permit to carry out the plant expansion that is nearing completion now. The Minnesota Center for Environmental Advocacy (MCEA) had sued the MPCA for how the MPCA issued the first permit to the city for the expansion and the courts ruled in favor of the MCEA. SEH had to redo the plant-expansion design to include more conditions in order to get the final MPCA permit for the expansion.

One of those conditions has been evident of late along the north side of Highway 95 just east of Princeton’s Rum River Drive. There, a contractor was altering the slope of the shoreline of the West Branch of the Rum River to reduce the amount of sediment eroding into the stream. That sediment carries phosphorous, says Ekola, and the Rum River flows into the Mississippi, and the phosphorous settles out in the Lake Pepin part of the Mississippi River, along southern Minnesota.

Phosphorous makes algae grow and besides being a nuisance in a body of water, algae consumes oxygen from a lake, Ekola said on Tuesday this week as she talked about the wastewater plant expansion project in Princeton.

Two other river bank locations in the city of Princeton have also undergone the same shoreline excavation this year as part of the wastewater plant expansion – one near Pioneer Park south of the middle school, and one near the south end of the golf course.

The wastewater plant expansion triples its processing capacity and also adds extra filtering to remove unwanted elements in the treated wastewater. Besides the major change in where the treated wastewater is discharged, another new feature is eight reed beds that were constructed at the plant. The concrete compartments for the reed beds can be seen on the south end of the plant complex.

The reeds, once planted and working, should break down the sludge to one-tenth of its volume, and sludge residue would be cleaned out of the reed beds every 7-10 years, according to Ekola.

Reeds have been used in the design of some municipal wastewater plants for 10-15 years now, Ekola said. Having reeds reduce the sludge means not having to spread wastewater sludge on farm fields, like has been done since the mechanical plant was built 17 years ago.

The newly-expanded plant is designed to process an average of 1.6 million gallons of wastewater per day, with a short-term ability to treat 1.9 million gallons daily during wet weather. To get a perspective of how much extra capacity the plant now has, the amount being processed today is close to 400,000 gallons daily, according to city public works director Bob Gerold, who oversees the plant’s operation.

Both Gerold and Ekola said the plant is operating successfully with its added features and newer design.

The expanded plant means more treated wastewater testing and monitoring, said Gerold last Friday. The Princeton plant, in fact, has the highest wastewater quality standards in the state because it is the newest, Gerold added.

The tests gauge the amounts of phosphorous, ammonia, nitrogen, mercury and also a property called carbonaceous biochemical oxygen demand, the latter expressed as CBOD. The higher the CBOD content, the more the wastewater has to be broken down as it requires a high amount of oxygen to do so, Ekola notes.

At the heart of the plant operation are millions of living bacteria that eat the wastewater’s organic material and they require oxygen to do this.

City Administrator Mark Karnowski said during a city council meeting about two months ago that when the original plant was put into operation in late 1995, there were problems with the operation. He said he therefore wanted to make sure any problems this time would be covered under the contractors’ warranties.

The price tag of the expansion project has added to the monthly wastewater bills in Princeton, despite a grant and low-interest loan from the United States Department of Agriculture’s Rural Development program. The bills went from $18.72 per month for a residential user in late 2011, to $50.40 per month when they were fully phased in during April this year.

Karnowski has said that any city faced with upgrading its wastewater facilities and keeping up with growth, will be faced with more cost.