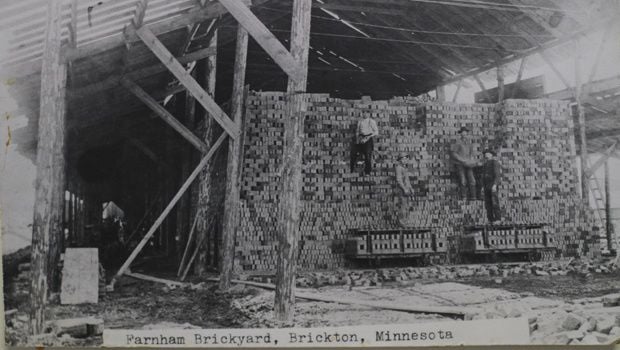 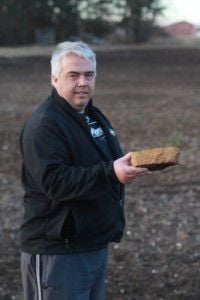 Andy Whitcomb holds a remnant of a Brickton brick that he had pulled off the surface of a newly-tilled piece of ground this past Nov. 14, on the Whitcomb Nursery property.

Andy Whitcomb holds a remnant of a Brickton brick that he had pulled off the surface of a newly-tilled piece of ground this past Nov. 14, on the Whitcomb Nursery property.

A small brick monument with a metal plaque is all that remains today where the town of Brickton once existed for nearly four decades, until 1929, about two miles north of the city of Princeton.

The monument is showing signs of wear from the elements and some of the ground on this state property where the monument sits is scarred by an ATV driving on it.

The operators of the brickyards were the Farnham Brothers, the Kuhn Brothers, Woodcock & Oakes, Rufus Morton and Clarence Young.

The monument was erected by the Mille Lacs County Historical Society (MLCHS) in 1976, and dedicated on May 29, 1977. Then

MLCHS president Willis “Tud” Young, who presided over the dedication and who had briefly worked in Brickton brickyards, paid tribute to the millions of bricks produced by the scores of laborers employed there.

Also present was a former Brickton brickyard employee – Adolph Minks. Minks fit what a brick-making employer would likely want. Minks, with his sturdy build, was known in Princeton as a hard worker, well into his senior citizen years.

Minks, in a Union-Eagle story years later, talked about the $1.50 per hour he received at those brickyards. That wage might not seem like much, but it was a lot back then, he said. “If you’d have given up,” Minks said, “they’d have asked the next boy (if he wanted the job) and he’d have said, ‘Yup,’ and you’d have been out of a job.

“Besides, money went a lot further in those days. You could rent a house for eight or ten dollars a month.” Minks recalled his wage rising up to 17 1/2 cents more per hour later on, when he started “hacking,” or piling bricks 11 rows high.

“For six weeks in the fall, those trains had all they could do to haul bricks and potatoes (out of the Princeton area),” Minks added. “Local trains ran daily during that time of year.”

The last bricks were made at Brickton in about 1927-28, according to various records gathered from the MLCHS for this story.

Historical accounts of Brickton state that the Brickton brickyards were built shortly after the Great Northern Railroad came to Princeton in 1886. The Great Northern depot that was built to accommodate the new rail line, is made of Brickton cream-colored bricks, just as are many other buildings in Princeton. Some examples are the Princeton Book & Bible building, the Lingle dental office, the Villa Manor apartment building and the former armory, now the Williams Dingmann funeral home.

The large amount of woods that covered the area near Brickton when that village was young, were useful as men were employed to cut the trees to fire the kilns in the brickyards. The tree harvesting also cleared land for farming.

Some brick fragments remain in the area of the brickyards. As Andy Whitcomb stood one day this past week on a small, newly-tilled field just north of the Whitcomb Nursery buildings, he reached down and grabbed part of a cream-colored brick. That would be something from when a Brickton brickyard was located at the site, he said.

On the west side of the Whitcomb’s Nursery property, is a depression in the ground about 20 feet deep, a few hundred feet long and about 100 steps wide. It was where clay had been dug out for the brickyard that sat on the site, Whitcomb said. LeRoy Bargfeld who lives about a mile away from there, supported that information last week.

LeRoy is keenly interested in Brickton history, and lives with his mother Deloris Bargfeld in what was once a boarding house at Brickton. The Bargfeld residence sits on the east side of the road running between Highway 95 and the town of Long Siding to the north.

The original owner of the Bargfeld property had the former boarding house pulled by two teams of horses from the Brickton area to its present location. The trajectory of the move was west, northwest from Brickton and it doesn’t appear that Highway 169 had yet been constructed when the house move took place, LeRoy said.

The Bargfeld house still has its original five bedrooms in the upper floor where the boarders would stay.

Deloris and her now late husband Clifford Bargfeld moved into the house in 1960, and bought it in 1966, from Clifford’s uncle-through-marriage, Oscar Erickson, who had bought it in 1922, Deloris noted.

The dark woodwork in the Bargfeld home is original and is of generous dimensions, the baseboard being about eight inches high with a curved design at the top.

Other reminders of Brickton

Other reminders of Brickton are clay pit depressions that are clues to the location of the five brickyards. One depression is Fog Lake that lies off to the south of the east section of the winding Brickton Road that snakes between Rum River Drive North and Mille Lacs County Road 4 to the east.

Fog Lake was formed from water draining into a depression created by clay deposits being dug out to make bricks at Brickton. That location and the Whitcomb Nursery site make for two Brickton brickyards. The other three brickyards must have been in the area of the former Ratzlaff lumber mill, LeRoy Bargfeld said.

A pond can be seen at the old Ratzlaff mill site. Wood products businessman Larry Doose has property in the former Ratzlaff sawmill site, and the Brickton Farms implement business and the I Saw It In Minnesota chain saw woodcarving operation are also at that location.

The late Tud Young, had described Brickton as having been like a mining town. Young had worked in one or more of the brickyards there when he was 13. A newspaper story on the dedication quoted Young as saying, “The men (at Brickton) worked hard, drank hard and fought hard. At times they were the most miserable bunch you’d ever seen.”

Young also described the area having its share of poverty and sickness during the Brickton years, including diphtheria that came through Brickton in 1918.

Another eyewitness account of Brickton is seen in a document at the MLCHS depot museum center in Princeton. It is written by William S. Oakes and titled, “Brickton, Minnesota, Through a Small Boy’s Eyes.”

There is no date on the document but it does state that Oakes was born at Brickton in 1896.

“I saw Brickton in its heyday, with five brickyards running full blast,” Oakes wrote. “It was not unlike a mining camp of the west. Five big steam boilers, five big steam engines, with machinery to match for making brick, with their shrill steam whistles, make it a busy place during the brick season.”

Oakes noted that Brickton was shipping out about 50 trainloads of brick each year (40 train cars to each train). Each of the Brickton brickyards employed 40-50 men and the combined payroll was the largest in that part of Minnesota, Oakes continued. “Princeton’s economy was just about kept going for many years as a result,” Oakes wrote.

Oakes also gave tribute to the horses, who Oakes stated, “performed so much hard work, so faithfully. They worked in the yards during the brick season, and in the winter they were all taken north to the woods for logging operations – long hours of toil, all for a little oats and hay. I hope they are all happy in horse heaven.”

Former Princeton resident Reed Henschel was to see another use for some of the Brickton clay pits, years after Brickton’s demise. Henschel, now 83, and living in Faith, S.D., told the following story by phone: Game and Fish authorities stocked some of those water-filled clay pits with fingerlings of various species of fish, including crappies, sunfish and walleyes, to rear for transferring to area lakes such as Spectacle, Green and Blue. Local Boy Scouts helped pull nets across one of these ponds at what became the Ratzlaff sawmill site, to bring out the fish for stocking in the other lakes.

Several times those nets caught on objects in the pits, the objects turning out to be machinery once used in the Brickton brickyards, Henschel said. One of those pieces of equipment was a horse-drawn scraper for digging clay out of the ground.

The Game and Fish people gave up taking the fish out of ponds like that after that netting experience, and just left the pit ponds for fishing, Henschel said. But there was one restriction, according to Henschel. The Game and Fish officials set a regulation that only Boy Scouts and other youth would be allowed to fish in those clay pit ponds. Henschel claims the fish, because of their unique environment in those pits, engaged in cross breeding so that something developed that he remembers being called a “sunappie.”

Oakes commented on the demise of Brickton this way: “Brickton’s brick business flourished until clay deposits nearer Minneapolis and St. Paul were developed. The lower freight rates (from less hauling distance) and increased use of cement gradually phased out the use of brick in large quantities. Brickton, after 800 million brick and 36 years of production, at last gave up. The last (Brickton) brick was made about 1926-27.”

LeRoy Bargfeld commented on the fact that only a small, worn monument marks the area where Brickton once existed. “I think it’s a shame,” he said. “People know so little about the history of this particular area when it is so rich with history.”