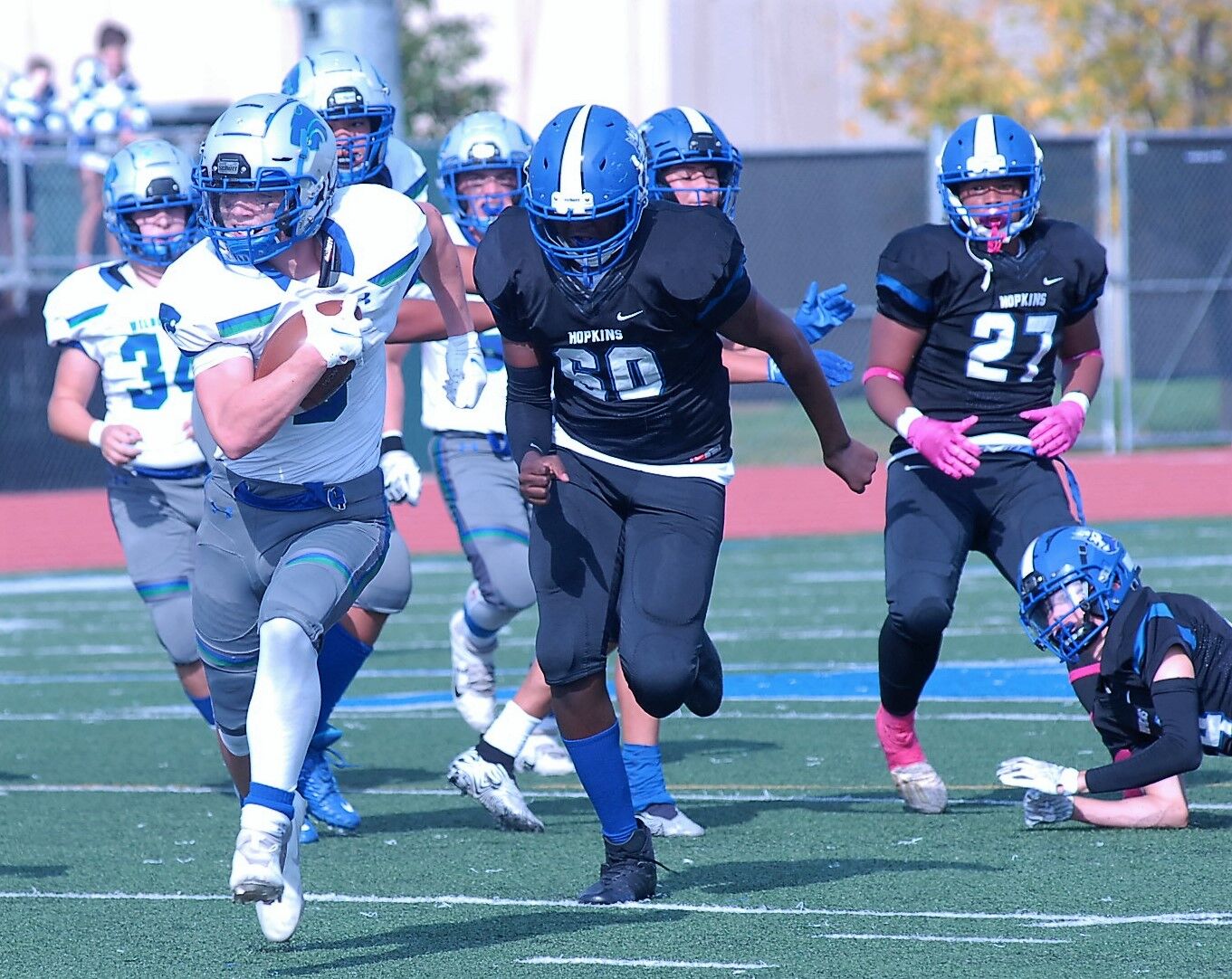 Eagan's Landon Tonsager breaks loose for big yardage in the Wildcats' 27-14 victory at Hopkins on Oct. 9. 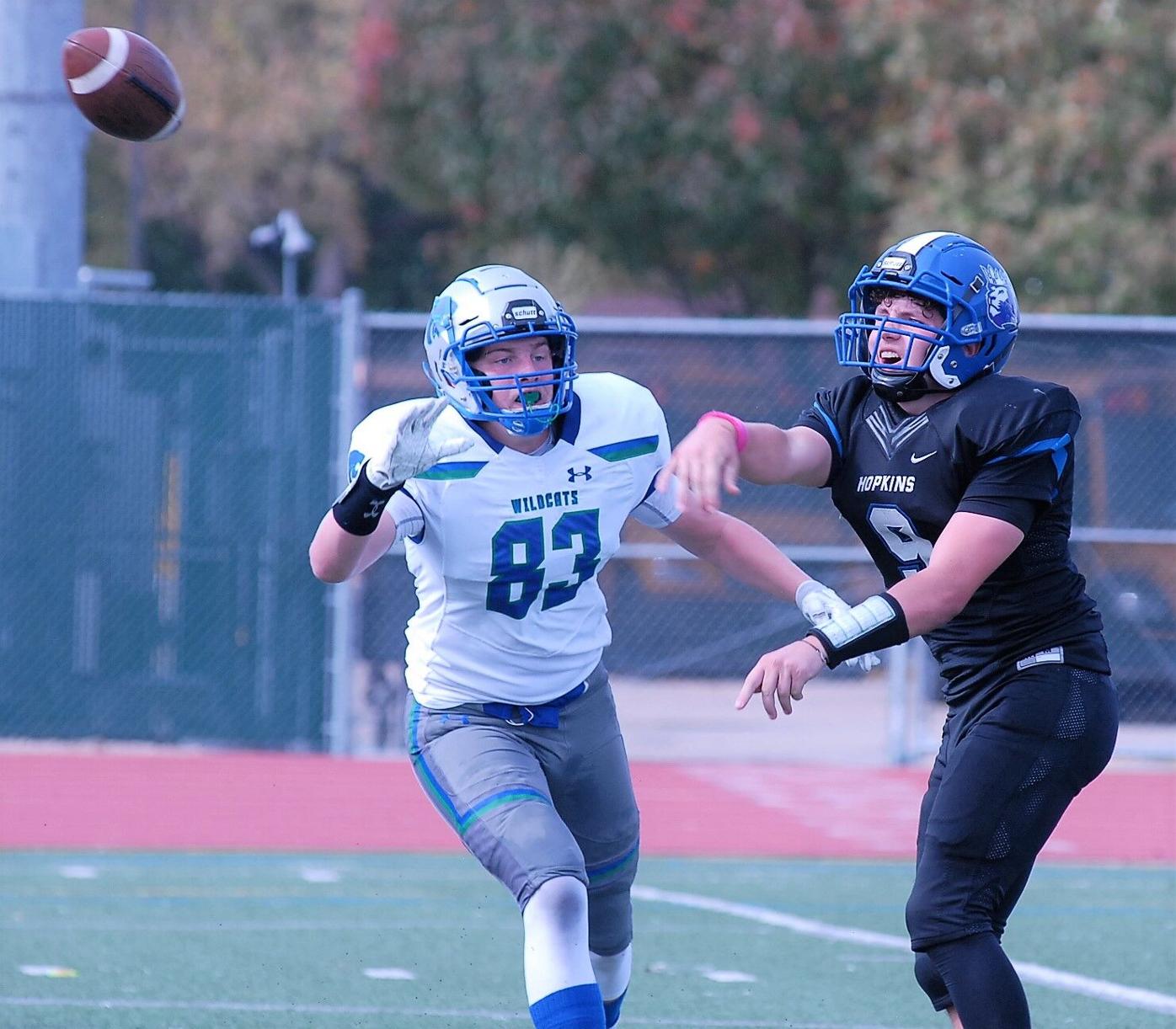 Eagan's Landon Tonsager breaks loose for big yardage in the Wildcats' 27-14 victory at Hopkins on Oct. 9.

Eagan has had a lot of quiet gatherings after football games the last few years, but things were different Saturday.

“We came together. We weren’t chirping at each other,” Myhre said after the Wildcats defeated Hopkins 27-14 for their first victory of the season. “We didn’t have guys yelling at each other to do your job because everyone was doing their job every single play. I couldn’t be more proud of these guys.”

Motioning to teammates coming of the locker room, Myhre added, “You can hear them. They’re a little bit jacked up right now.”

The Wildcats (1-5), behind a quarterback making his first varsity start, rolled to a four-touchdown lead in winning their first game since Nov. 6, 2020.

Sophomore Carson Schwamb ran the offense smoothly. The player he replaced, junior Landon Tonsager, switched to tailback and scored two touchdowns. Schwamb also threw a 15-yard touchdown pass to Rowen Phillips in the second quarter and scored on a 1-yard run in the fourth.

All of it gave the Wildcats a chance for some much-needed postgame levity. Assistant coaches wanted it known that the victory made Nick Johnson the third-winningest varsity football coach in Eagan High School history – with two. Most of the school’s football victories were engineered by Dave Fritze, who coached from the program’s inception in 1990 through 2005, and Rick Sutton, who succeeded Fritze and coached the Wildcats for 10 seasons.

Johnson has been working to make the Wildcats competitive again since taking over the program in 2019. “I’m running out of things to say after losses, so this is great,” he said Saturday. “It’s the most complete game we’ve played. I thought our defense was incredible. They did a really, really nice job, and I thought our offense did a good job of driving the ball down the field 4 or 5 yards a pop.

“I’m proud of them. They deserve this for all the work they put in.”

Schwamb is the third starting quarterback for the Wildcats this season. Johnson said the plan all along was to give Schwamb the start, and that was made easier when the coaches decided running back Parker Faul needed rest to recover from a knee injury. That opened a spot in the backfield, which Tonsager filled.

“Landon is a great athlete, fun to watch, and we wanted to get him in a situation where he could just run,” Johnson said. “Carson did a great job of reading and running the option.”

Hopkins (0-6) also is in a building phase under first-year head coach Trevor Tolly. The Royals have some skilled athletes but had only about 30 players in uniform Saturday. For perhaps the first time in Johnson’s tenure, the Wildcats had more depth than their opponent.

Now the Wildcats are anxious to do it again, preferably in front of a home crowd. Eagan’s one victory in 2020 was at Wildcat Stadium, but attendance was limited because of COVID-19 protocol. The final home game of the regular season is 7 p.m. Friday against Burnsville.

Eagan last home game was a 34-13 loss to District 196 rival Eastview on Oct. 1, which stung for more than the usual reasons.

“We had just short of 5,000 people there,” Johnson said. “I’ve never been in that stadium when it felt that way. I think we were disappointed with the showing we had when there were that many people there, and I think that fueled us a little bit” against Hopkins.

So too did the Wildcats’ student and adult fanbase, which commuted across the metro area on a sunny Saturday morning to watch their team play a school that isn’t a traditional Eagan rival. They outnumbered the Hopkins fans in the stadium.

“We’re out here for warmups, which are 30 minutes to an hour before the game, and it was heartwarming to see our stands almost full,” Myhre said. “You know you have to put it on the line when you see something like that.”