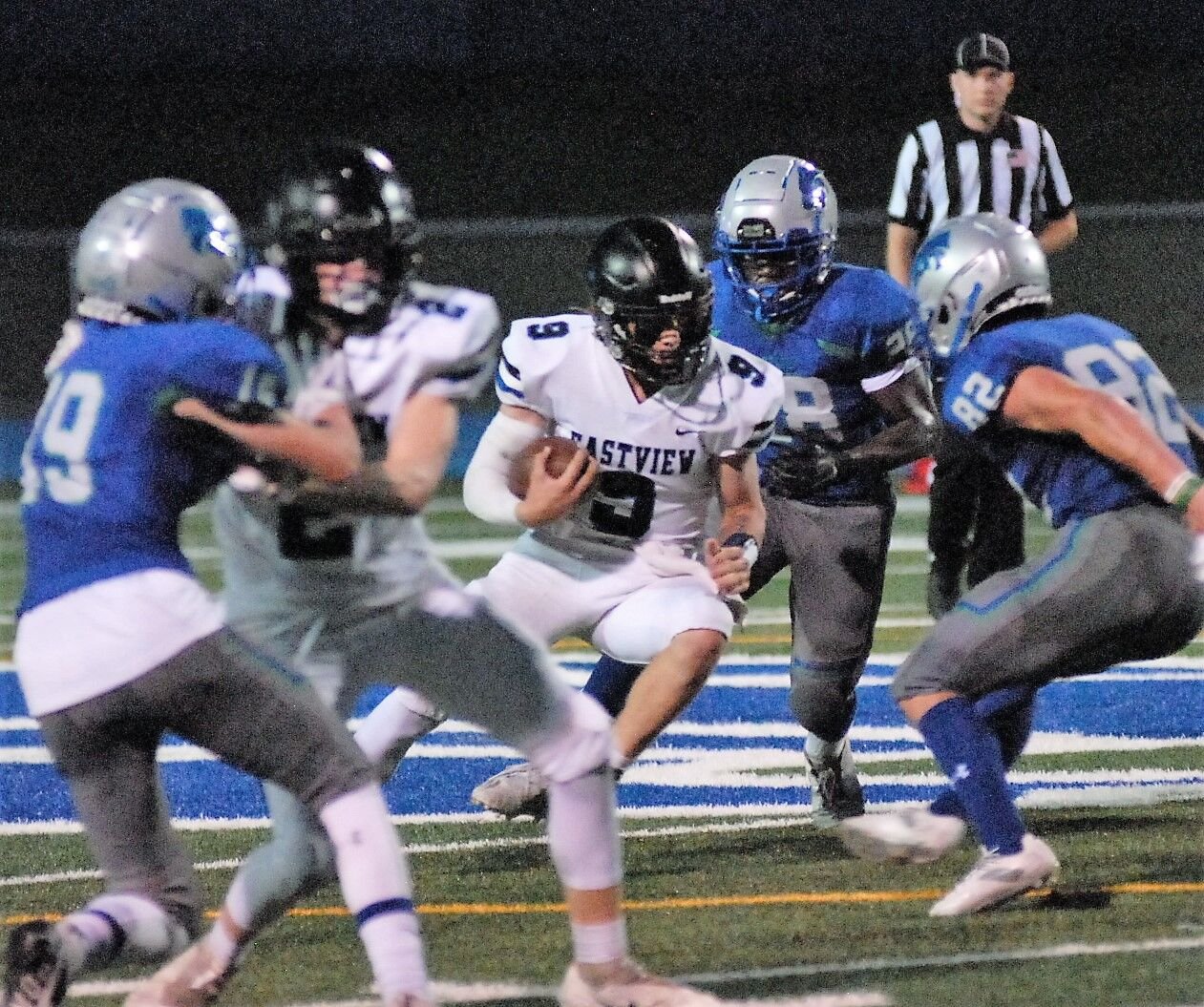 Eastview running back Ezra Formaneck looks for a seam in Eagan defense during the Lightning's 34-13 victory Oct. 1 at Wildcat Stadium 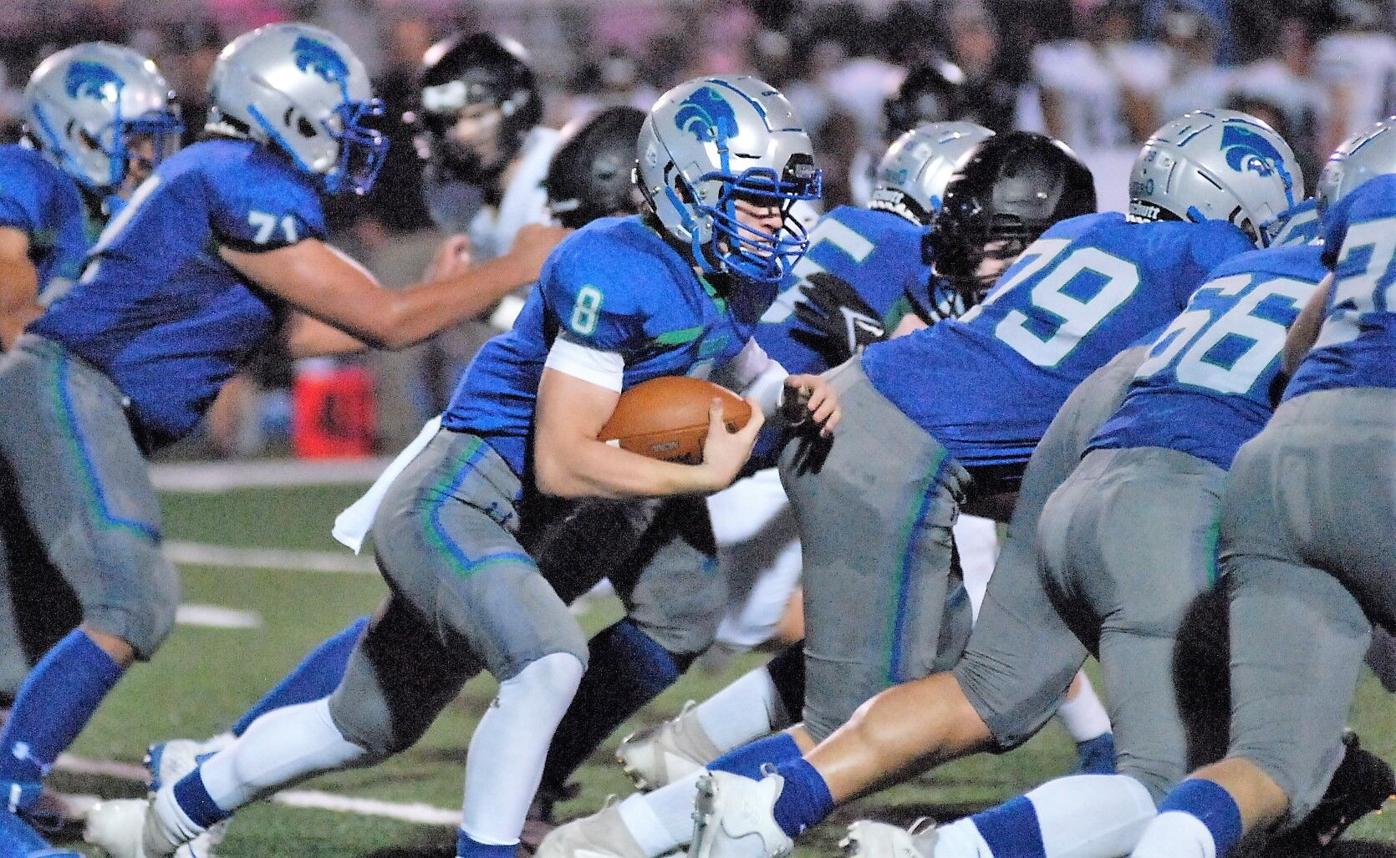 Eagan quarterback Landon Tonsager carries the ball on a keeper as the Wildcat offensive line tries to push downfield during an Oct. 1 home game against Eastview.

Eastview running back Ezra Formaneck looks for a seam in Eagan defense during the Lightning's 34-13 victory Oct. 1 at Wildcat Stadium

Eagan quarterback Landon Tonsager carries the ball on a keeper as the Wildcat offensive line tries to push downfield during an Oct. 1 home game against Eastview.

First-half touchdowns by four different players gave Eastview all the cushion it needed in a 34-13 victory at Eagan in Metro Maroon South sub-district football Oct. 1.

Running backs Tyler Jerstad, Damon Green and Layne Applegate scored rushing touchdowns, and Applegate also threw a touchdown pass to Ruhan Jordan as the Lightning improved to 2-3. Eastview avenged a 37-15 loss at Eagan in 2020 that was the Wildcats’ only victory of that season and sent Eastview spiraling to an 0-5 record.

The Lightning added another score in the third quarter on Ezra Formaneck’s 3-yard run. Formaneck caught a pass for a two-point conversion in the first half in addition to his touchdown run.

Eastview’s defense set up a score when Marcus Johnson intercepted a pass in the second quarter and returned it to the Eagan 7, leading to Applegate’s touchdown run on the next play.

Eagan (0-5) scored twice in the fourth quarter on a 2-yard run by Parker Faul and a 1-yard run by Landon Tonsager.

Farmington’s offense broke loose for 41 points in the second half as the Tigers ended a three-game losing streak.

Despite the final score, it was not a start-to-finish Tiger rout. Edina scored on its opening possession of the second half of the Oct. 1 game, cutting the Farmington lead to 13-7. The Tigers regained control with three rushing touchdowns by senior Rod Finley before the quarter ended. On the first play of the fourth quarter Jonathan Shrum returned an interception 35 yards for a touchdown and a 41-7 Farmington lead.

Finley finished with 120 yards rushing and four touchdowns. He also caught six passes for 81 yards. Jeffrey Branson, a sophomore, gained 65 yards on six carries and scored once. Jonah Ask also had a rushing touchdown for the Tigers.

In addition to the fourth-quarter interception return, Shrum led the Farmington defense with 15 tackles, including nine unassisted. Zach Dahl and Dylan Olson had seven tackles each.

The loss dropped Edina to 0-5. The Hornets have allowed 42 points or more in their last three games.

Farmington (2-3) will try to even its record when it plays Rosemount at 7 p.m. Friday in the Tigers’ homecoming game. Rosemount (3-2) has lost its last two, including 28-14 to No. 1-ranked Lakeville South last week.

The Eagles sent their homecoming and Tackle Cancer fundraiser crowd home happy with their first victory of the season.

Apple Valley took the lead in the second quarter of the Oct. 1 game, scoring on a red-zone play (a 2-yard run by Conner Elliot) and a long-distance play (an 85-yard run by quarterback Tim Wyandt. It turned out to be all the Eagles defense needed, although the offense did add a touchdown in the second half.

Apple Valley is 1-4. Two Rivers is 0-5 and was shut out for the second time this season.

The victory could prove valuable when the Class 5A, Section 3 playoffs start later this month. While it will be difficult for the Eagles to rally and earn a top-two seed and first-round bye, a couple more victories in the regular season could help them secure a first-round home game.

It won’t be easy, though. The Eagles go on the road to play a 4-1 Robbinsdale Armstrong team at 6 p.m. Friday. The following week they play at home against undefeated St. Thomas Academy, ranked third in Class 5A last week. The final regular-season game is home against Irondale on Oct. 20.

The Sabers, who last week were ranked third in Class 6A, had been scoring almost 50 points a game before facing North on Oct. 1. They scored just one touchdown last week, and that came in the fourth quarter.

Problem was, that was enough as the Panthers continued to have trouble establishing their offense. Lakeville North has allowed 11 points per game this season but is 1-4 and was shut out for the third time.

Senior linebacker Trey Johnson made 13 unassisted tackles and 15 total tackles for the North defense, which also had Maddox Craig (13) and Blake Gode (10) in double digits for tackles. Najee Nelson intercepted a pass.

Shakopee (5-0) kicked a field goal in the first quarter but didn’t score again until the fourth on Jadon Hellerud’s 1-yard run. Hellerud rushed for 133 yards on 31 carries.

Gavyn Schraufnagel gained 49 yards on 20 carries for Lakeville North, which was held to 86 yards total.

The Panthers will try to end a four-game losing streak when they play host to Edina in their homecoming game at 7 p.m. Friday.

The Blaze scrambled to pull even after three quarters, only to fall when Park scored two touchdowns in the fourth.

Burnsville (1-4) was led by senior Colton Gregersen, who rushed for 121 yards and two touchdowns, and junior Henry Saykeo, who gained 84 yards and scored once. The Blaze gained 336 yards, of which 238 came on the ground.

Saykeo scored the only points of the first quarter on an 11-yard run. Then things got wild in a 41-point second quarter, which ended with Park holding a 28-19 lead.

The Wolfpack (3-2) scored early in the third quarter to make it 35-19 before Burnsville rallied on an 80-yard kickoff return by Dahcai Claybourne and 1-yard run by Gregersen. Gregersen ran for two-point conversions after both Burnsville scores.

Park broke the 35-35 tie with a 56-yard touchdown pass early in the fourth quarter. The Wolfpack scored again with less than six minutes remaining to go up by 13 points.

The Blaze’s Gregersen also had a 48-yard touchdown run in the second quarter. Quarterback Sterling Brown Jr. had two completions for 98 yards, including a 61-yard touchdown to Jay Homuth.