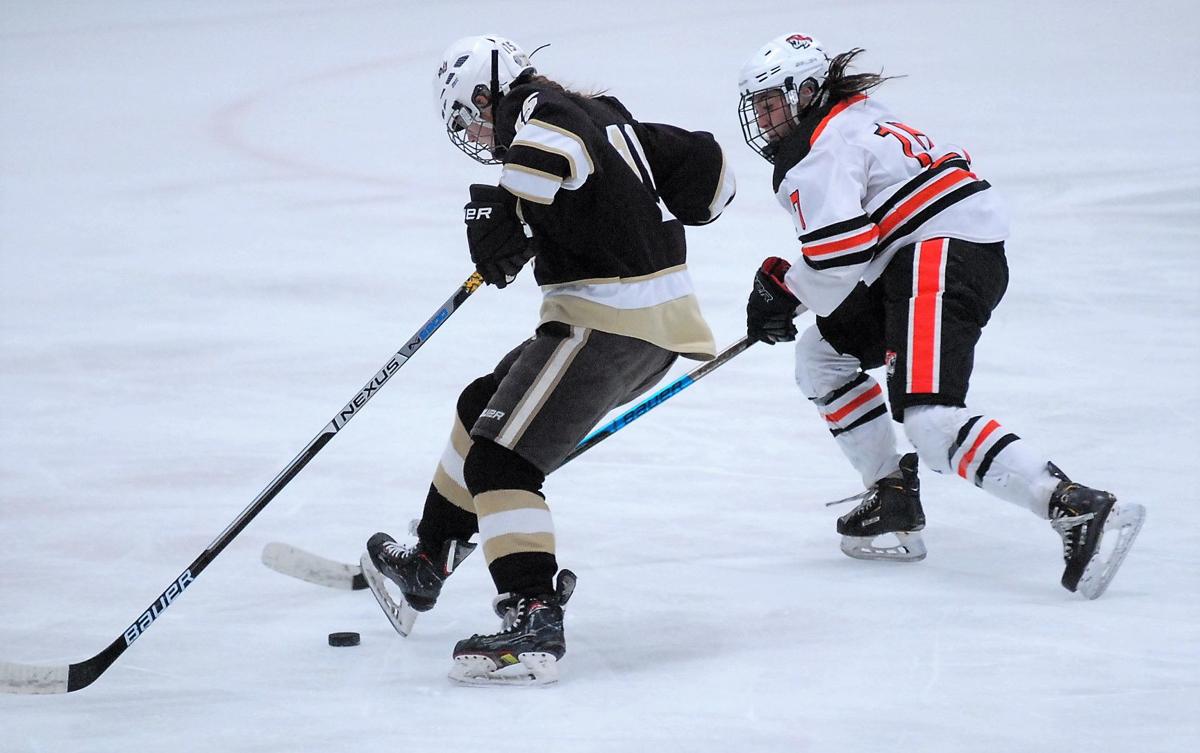 Apple Valley forward Marie Moran tries to kick the puck back on her stick as Farmington's Brenna Fuhrman defends during a South Suburban Conference girls hockey game Tuesday. Farmington won 4-3 in overtime to tie Apple Valley for the conference lead. 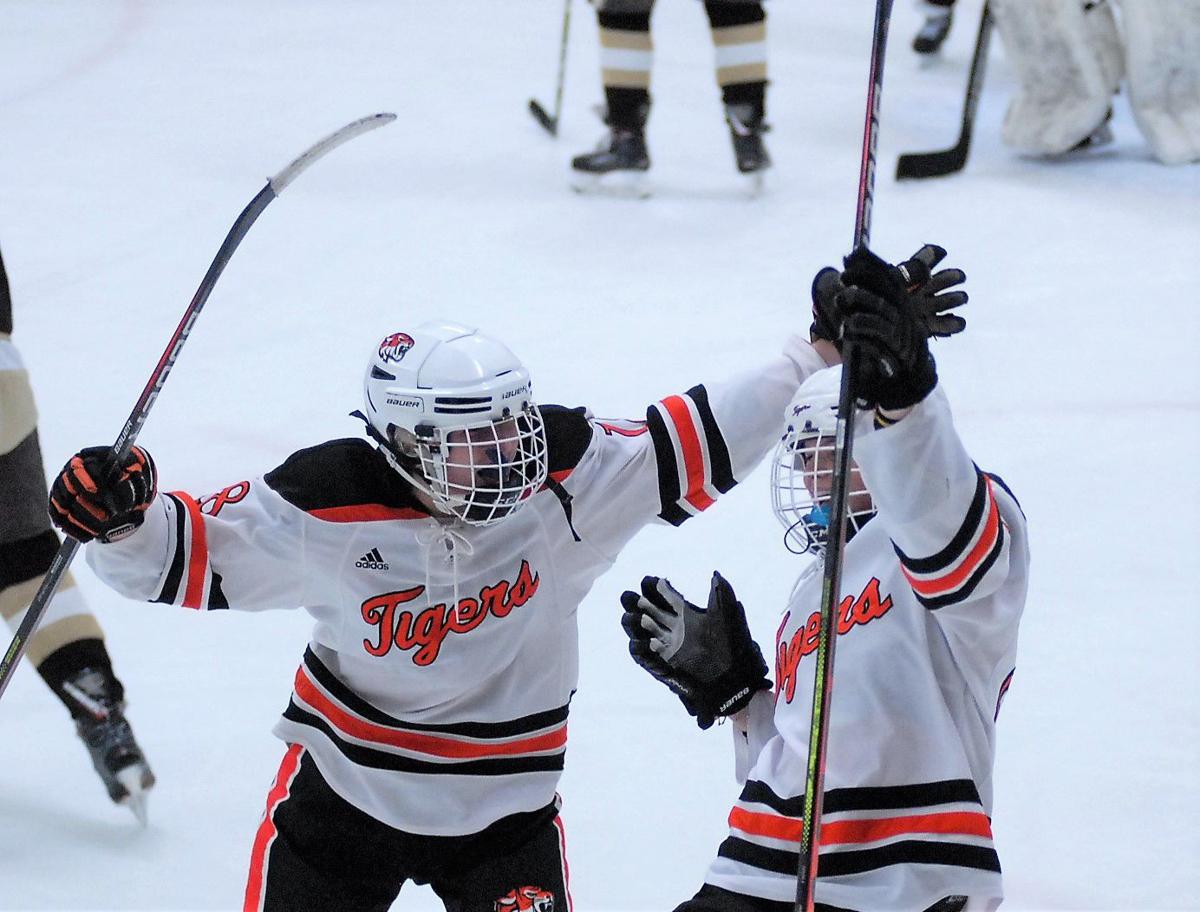 Farmington players Makenna Kadrlik (left) and Sadie Long celebrate Long's overtime goal in the Tigers's 4-3 victory over Apple Valley on Tuesday. The game-winner was Long's third goal of the night.

Apple Valley forward Marie Moran tries to kick the puck back on her stick as Farmington's Brenna Fuhrman defends during a South Suburban Conference girls hockey game Tuesday. Farmington won 4-3 in overtime to tie Apple Valley for the conference lead.

Farmington players Makenna Kadrlik (left) and Sadie Long celebrate Long's overtime goal in the Tigers's 4-3 victory over Apple Valley on Tuesday. The game-winner was Long's third goal of the night.

Farmington can skate and move the puck, but to win games like Tuesday night’s battle for the South Suburban Conference hockey lead, the Tigers knew they needed a dose of grit.

It arrived, and just at the right time.

The Tigers dominated early, taking a two-goal lead in the first period against Apple Valley. Then they frittered it away and appeared to be on the verge of losing until forward Sadie Long scored with 43.5 seconds left in the third period. Long struck again 37 seconds into overtime, knocking in a rebound as Farmington won 4-3 at Schmitz-Maki Arena.

The victory pulled Farmington into a tie with Apple Valley for first place in the conference. Both teams are 8-3 in league play for 16 points, three ahead of Burnsville and Lakeville South.

It’s been a struggle for the Tigers, who came into the season as one of the South Suburban favorites after returning most of the players from a team that finished fifth in the 2019 state Class AA tournament. Farmington had to overcome a slow start, injuries and absences to get back in the race.

Farmington lost its first two conference games and first three overall, but the Tigers (11-5) now are on a seven-game winning streak. “After our start, I thought it would take us until mid-January to the end of January to put us in this spot,” Tigers coach Jon Holmes said. “To get here now, to put ourselves in a position where our fate is in our own hands, it’s huge.”

Apple Valley (13-4 overall), after being heavily outshot the first two periods, came back to take a 3-2 lead on Makayla Moran’s goal with 5:50 left in the third. Moran also assisted on a goal by her sister Marie, which started the Eagles’ rally late in the second period.

In the final minute of the third, with Farmington goalie Ryleigh Furlong on the bench for a sixth attacker, the Tigers got the puck to the front of the net and took several swings at it. Finally, Long put it away.

Long scored on a rebound in overtime after Makenna Kadrlik took the first shot. The game-winner completed a hat trick for Long, who also scored one of the Tigers’ first-period goals.

“Sadie has had quite a few big goals for us,” Holmes said. “She’s gritty, goes hard to the net, and she’s got a really heavy shot. She’s not one who’s going to fold under pressure, so in big situations she’s right there knocking on the door.”

Going to the net is something the Tigers have had to practice. In youth hockey, they were good at keeping possession and playing on the perimeter, but “in high school where the girls are more physical, you’ve got to get someone to the net,” Holmes said.

“That’s a huge part of the game that we need. We’ve worked on being gritty during practice because that’s going to win games,” said junior defender Brenna Furhman, who returned to the Tigers last weekend after playing for the gold-medal U.S. team in the world Under-18 championships.

Fuhrman followed along on social media from Slovakia while the Tigers built their winning streak.

“I was super-stoked to see them winning all their games,” she said. “And I had faith we could come back (from the slow start). We didn’t lose many seniors from last year. Our team is almost the same.”

The Tigers now might have to find a way without one of their other top players, sophomore Claire Enright, who has a torn labrum in her hip. The hip eventually will require surgery, although Enright is trying to play through the injury this season, Holmes said. But it was too painful to allow her to skate in the third period or overtime Tuesday.

Enright’s injury is another in the series of challenges for Farmington, and it took until late in the third period before the Tigers adjusted to her not being on the ice, Holmes said. But, they found a way.

“Being able to win this game was big because it shows we can get through stuff together as a team,” said Fuhrman, who scored the Tigers’ first goal against Apple Valley.

Jade Ford had a third-period goal for Apple Valley, and goalie Keni Allen made 33 saves.

Farmington plays eighth-ranked Blake in a non-conference game at 5:30 p.m. Friday before going to Shakopee at noon Saturday. Apple Valley returns to the ice at Prior Lake at 3 p.m. Saturday.