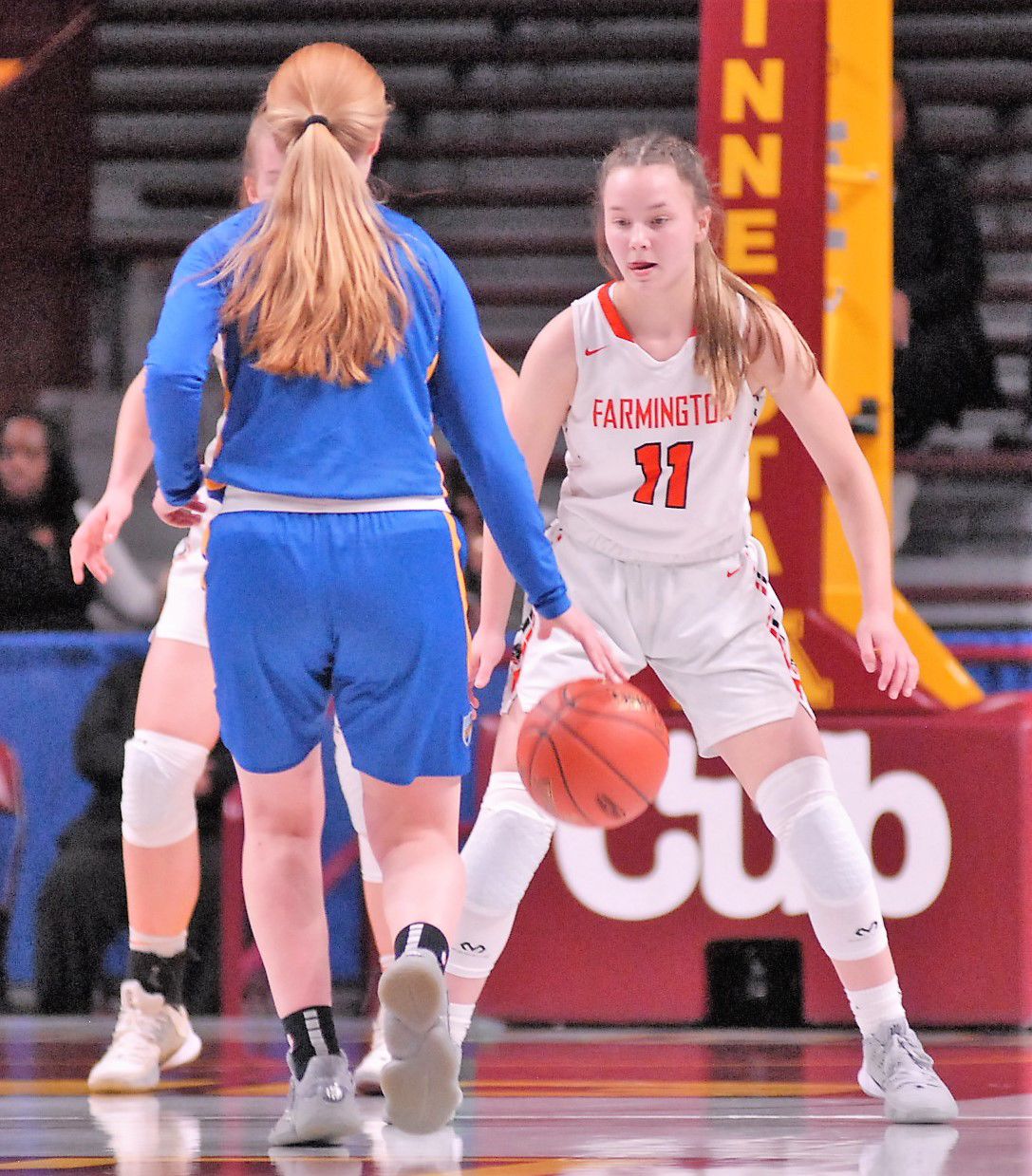 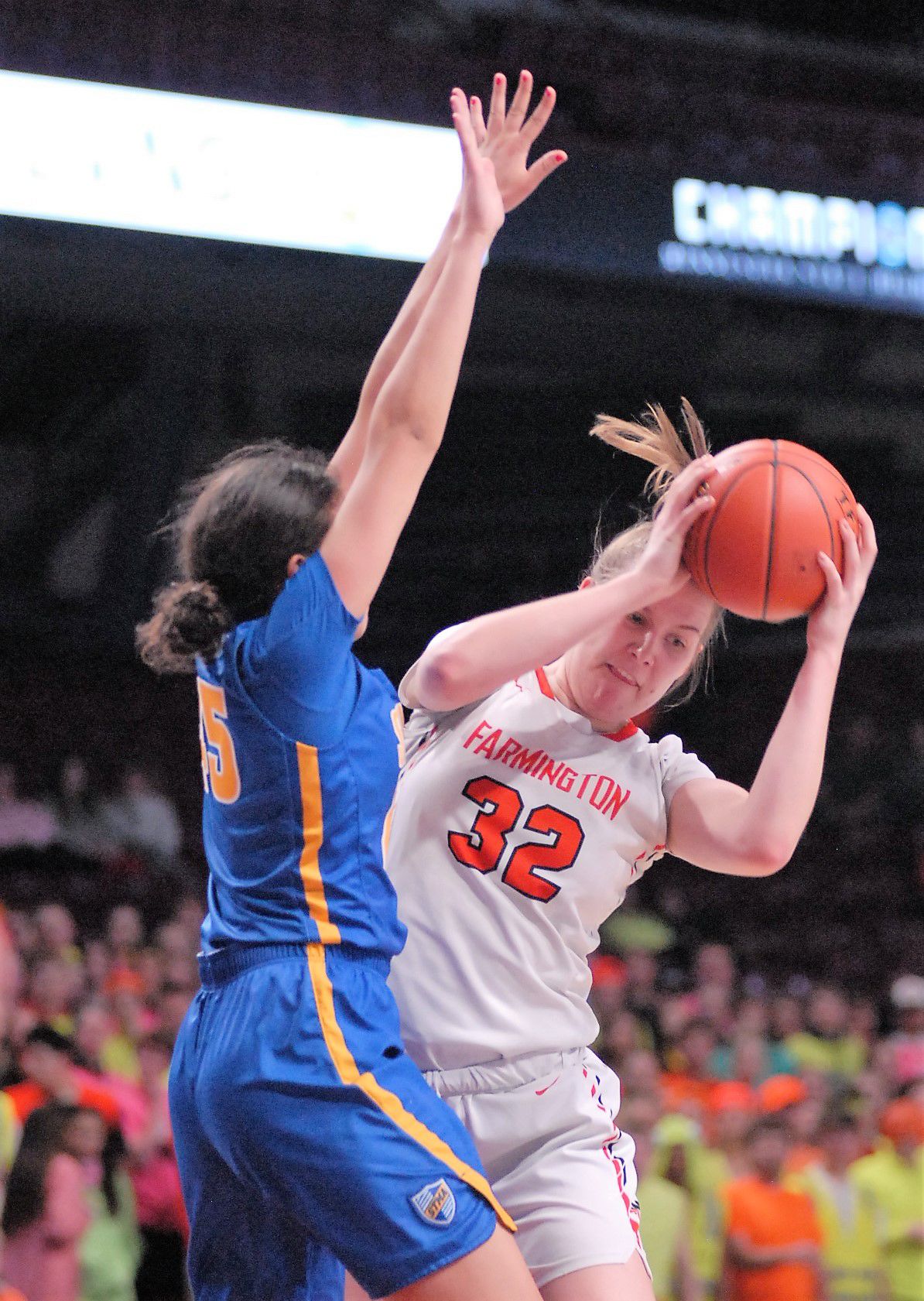 Tigers center Sophie Hart pulls down a rebound. She had 21 points, 16 rebounds and eight assists. 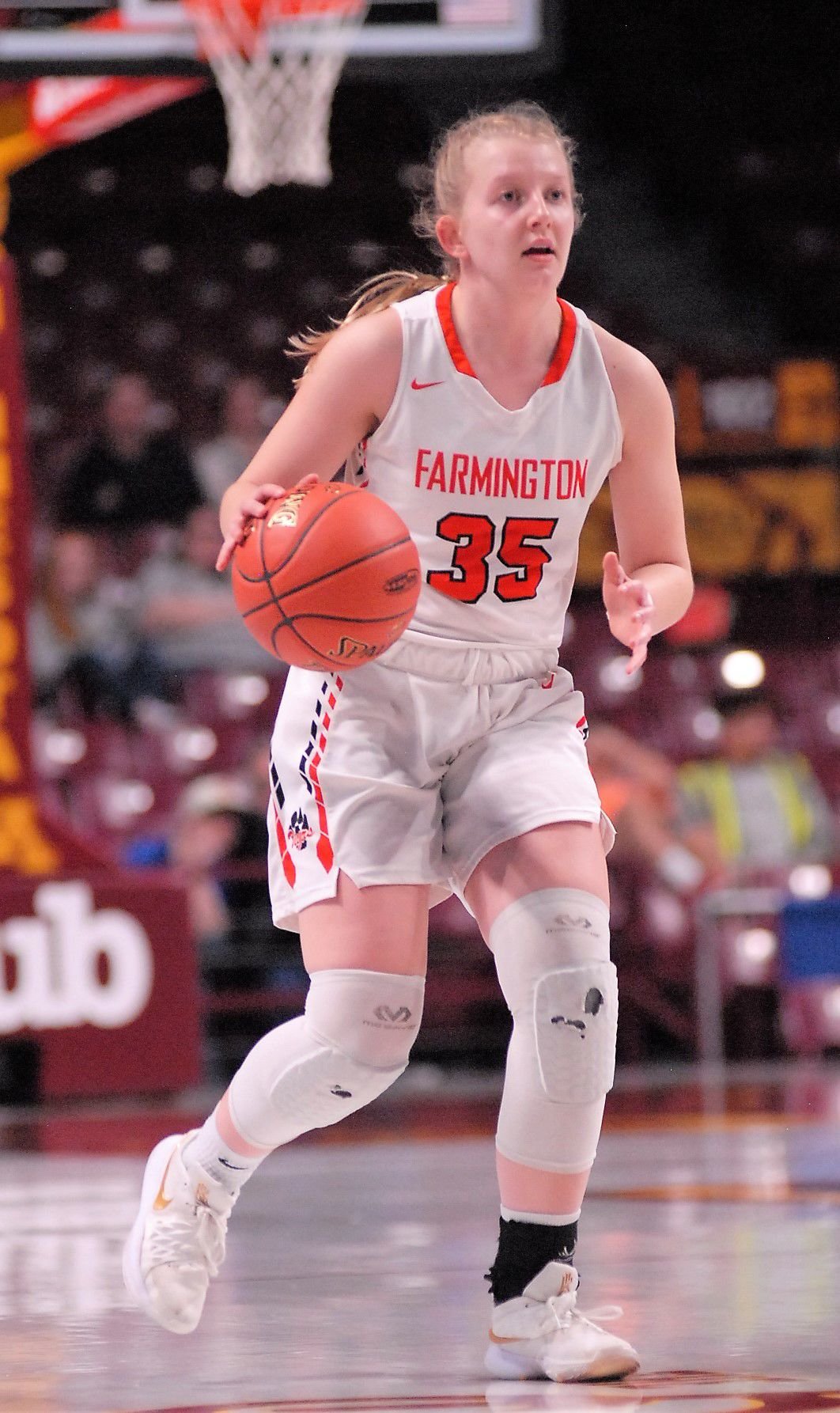 Senior guard Morgan Ebel brings the ball upcourt during the second half. 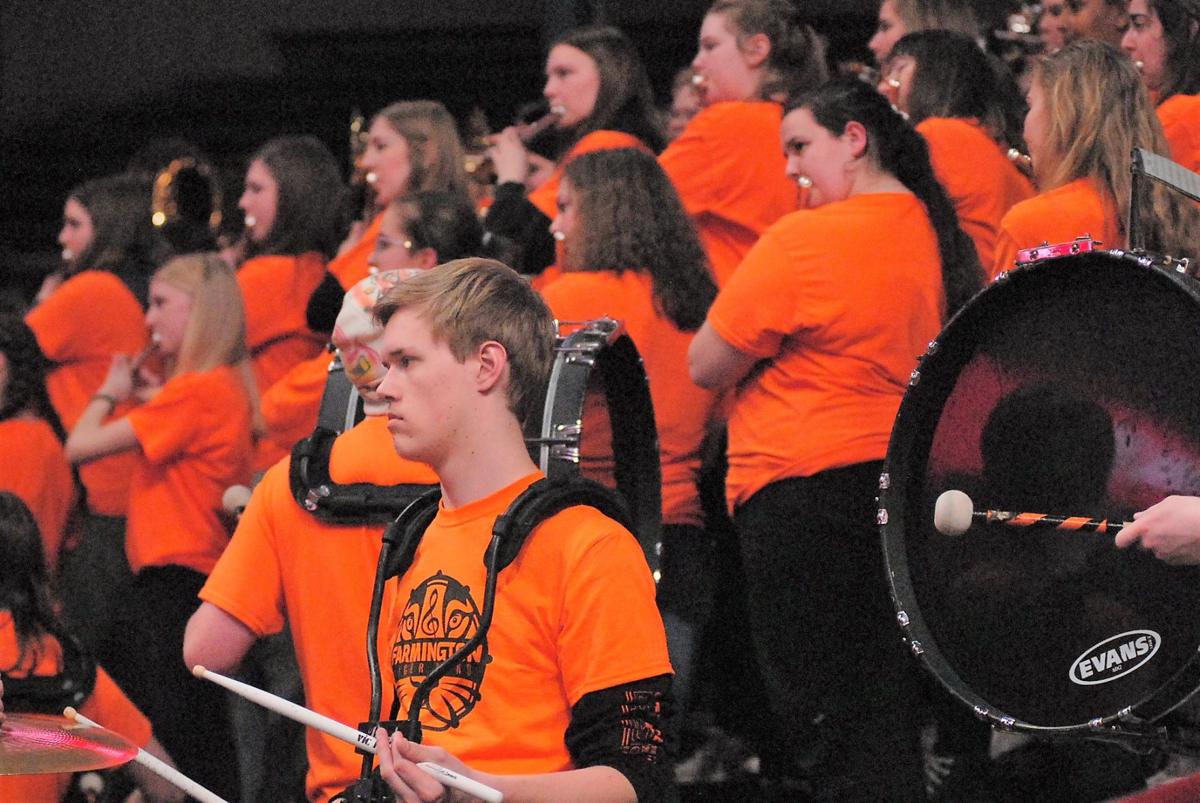 The Farmington High School band kept Tigers fans revved up during a timeout. 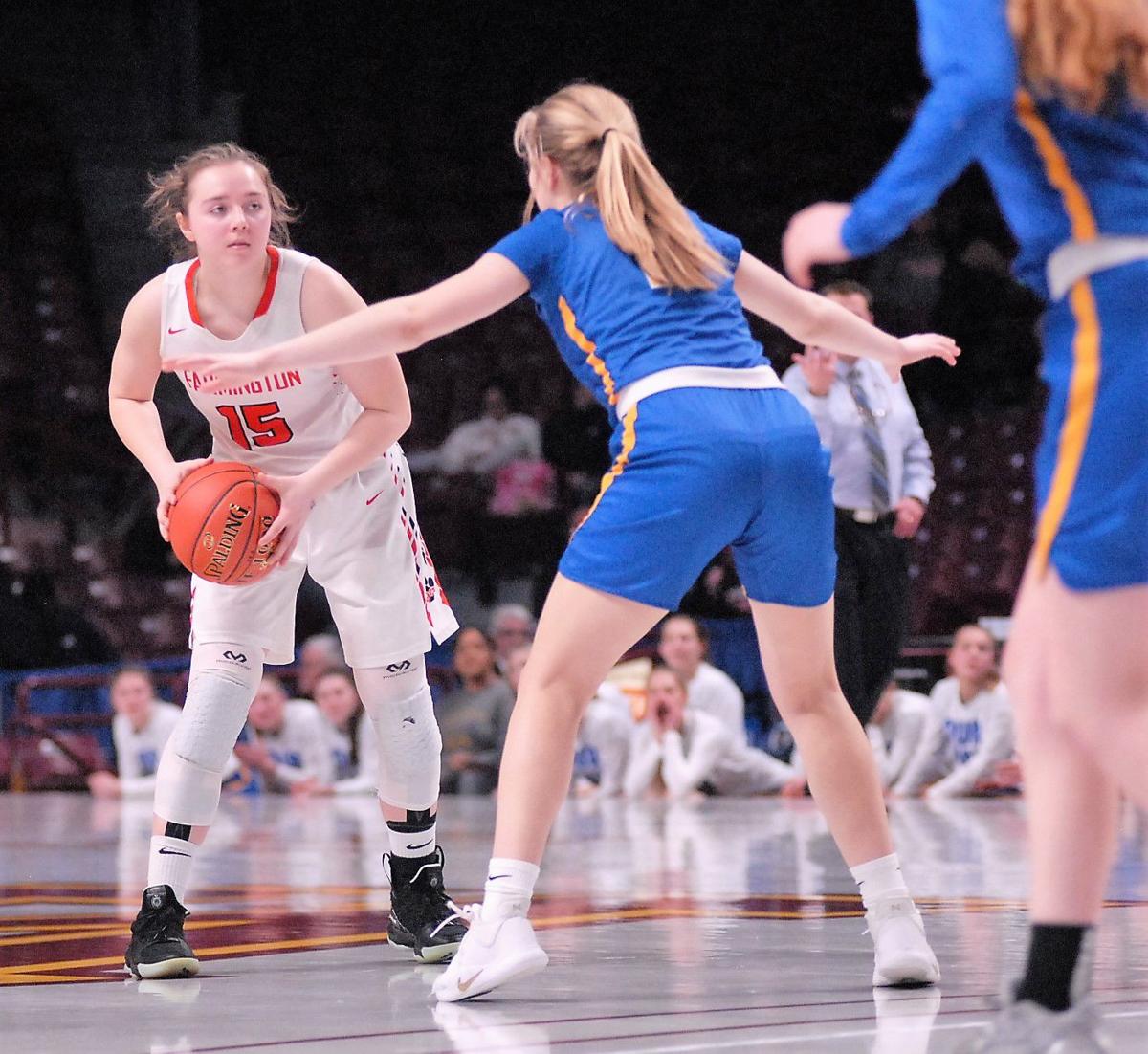 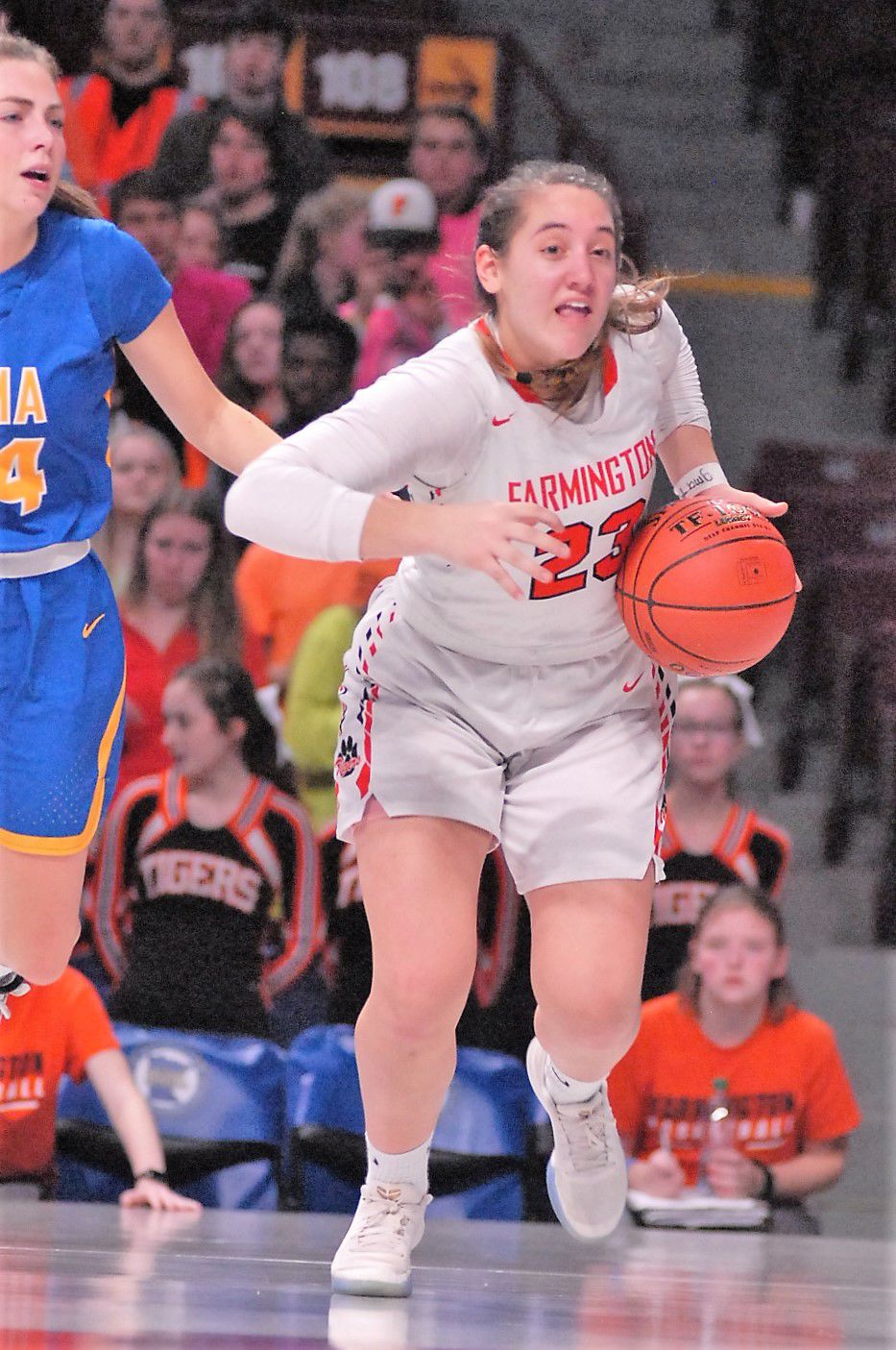 Farmington sophomore Rose Wille drives the baseline during the second half. 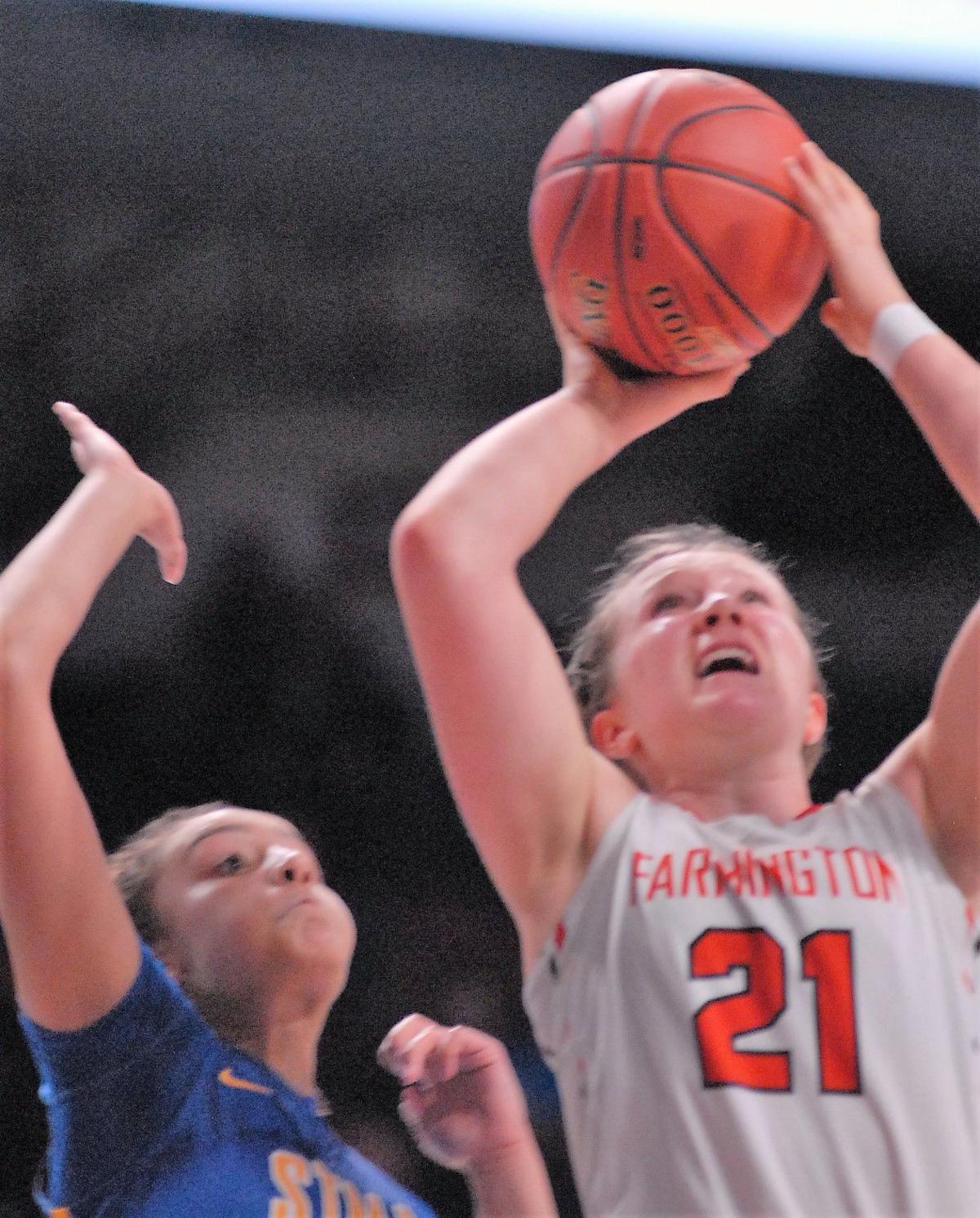 Senior forward Katelyn Mohr scores during the first half. 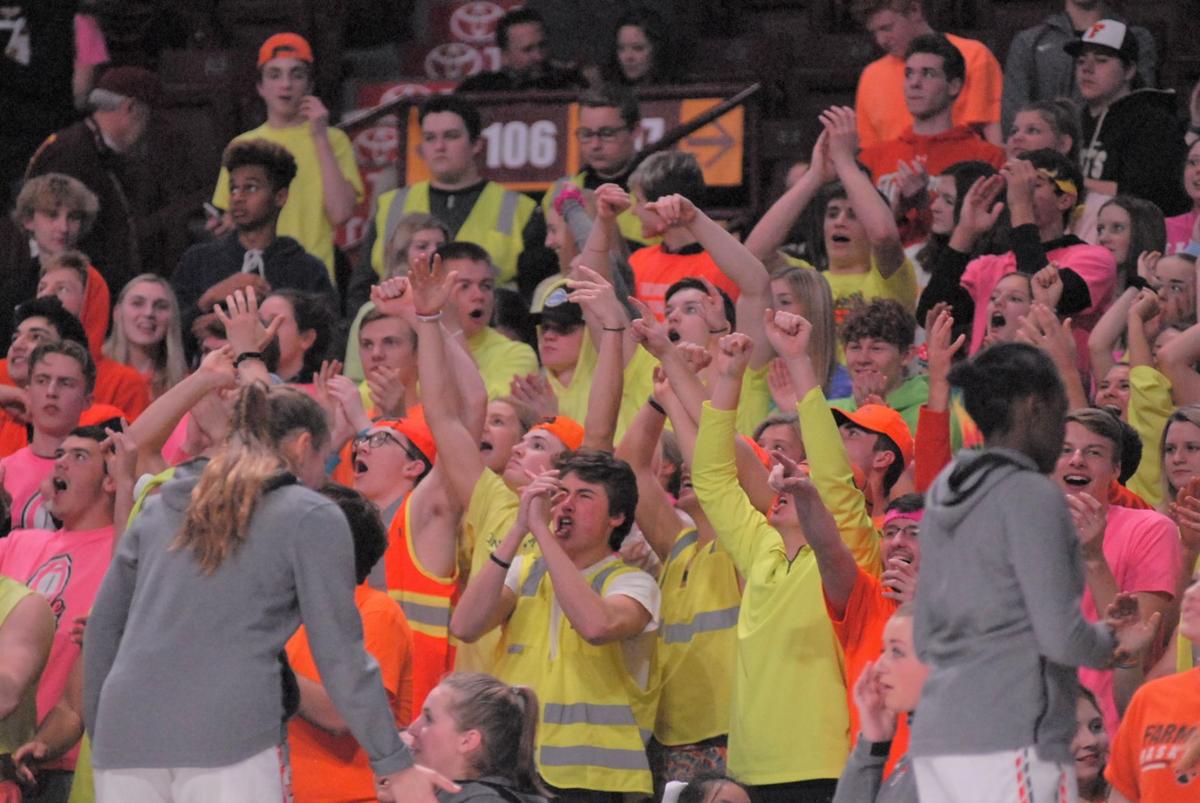 Late in the second half, the Farmington student section is anticipating victory. 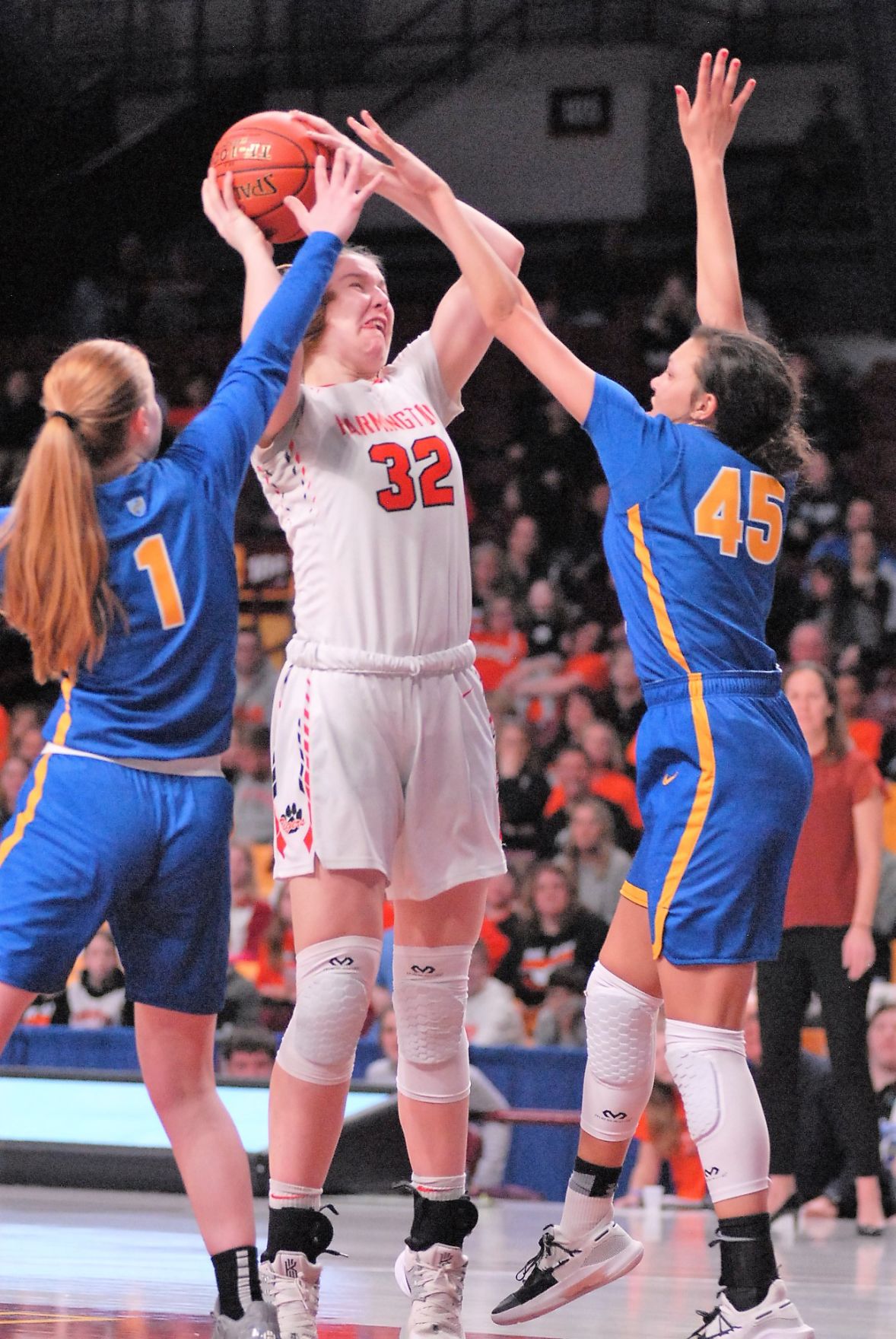 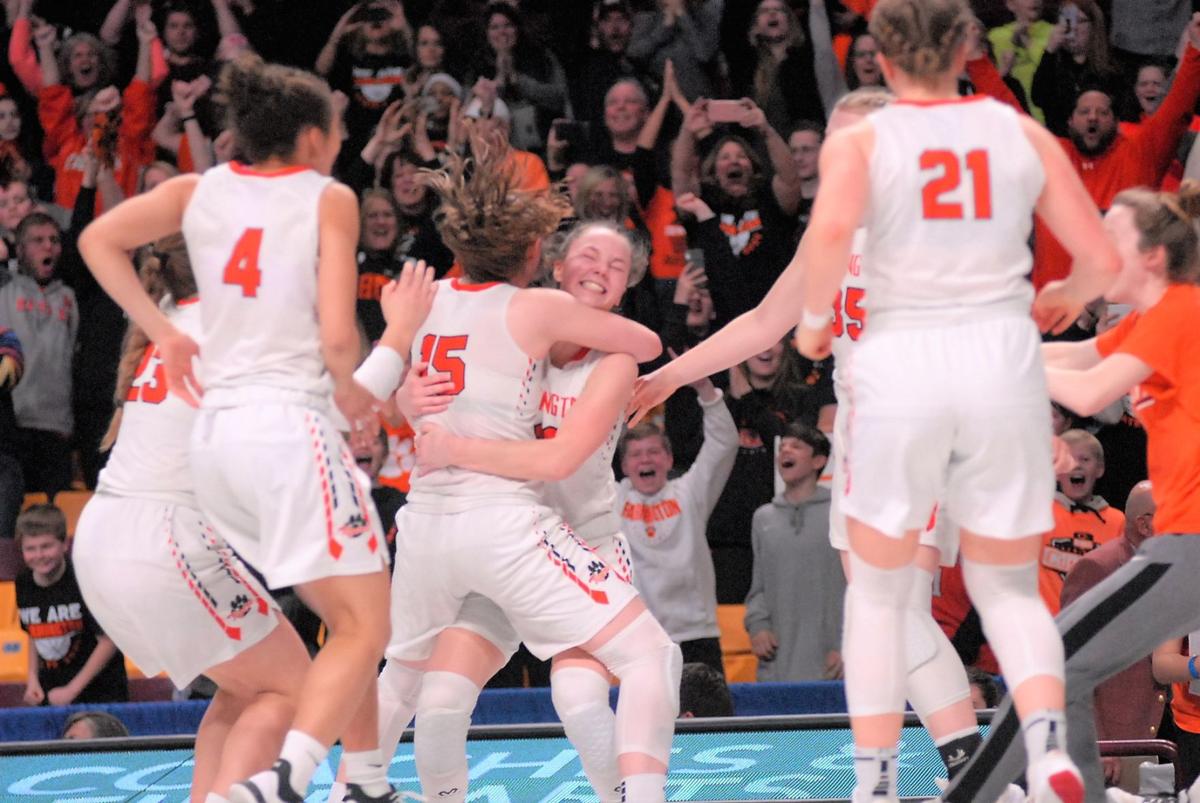 The Tigers celebrate a victory they believed would send them to the state championship game against Hopkins. About 12 hours later they learned their season was over. 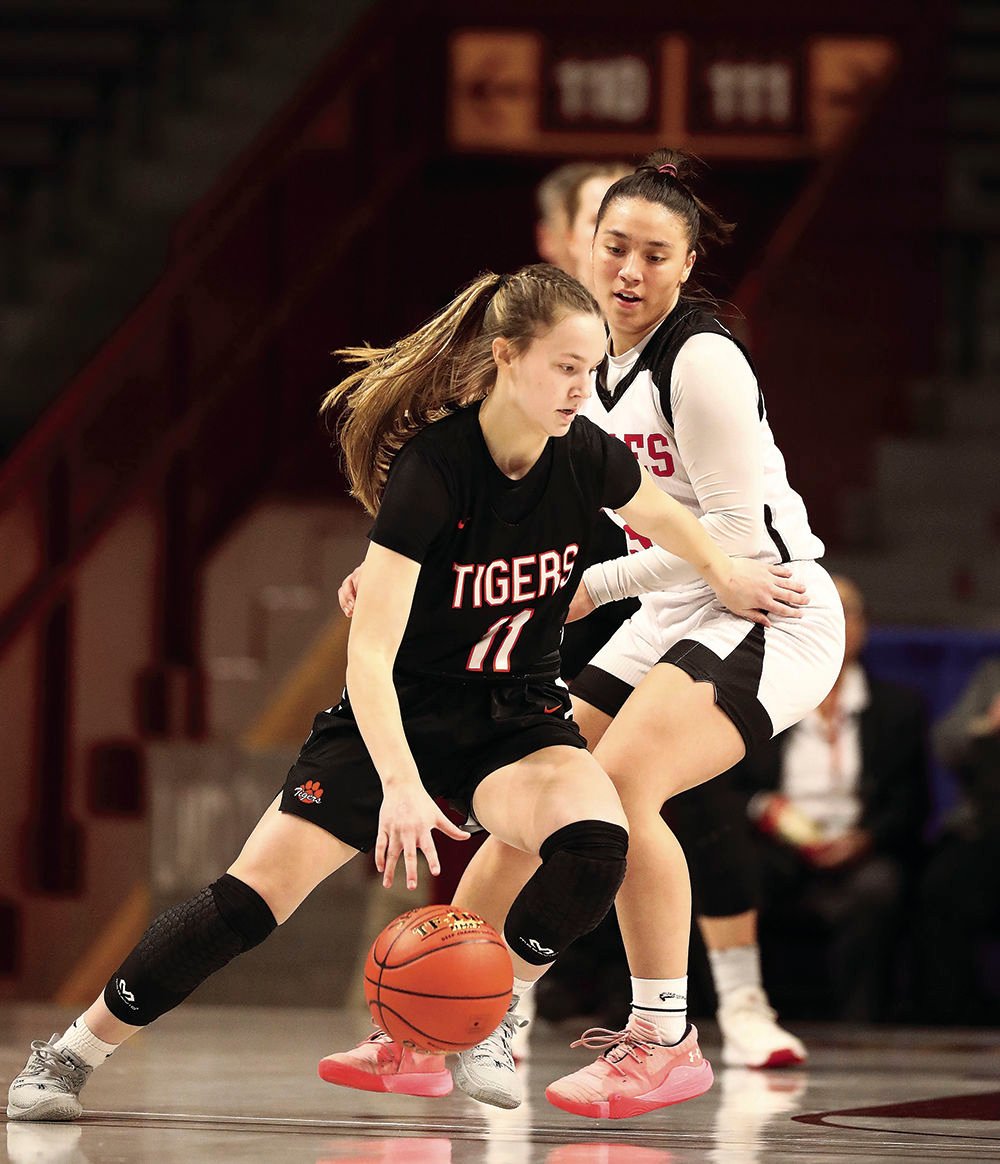 Farmington's Paige Kindseth looks for a route to the basket in a state tournament game March 11 against Eden Prairie.

Tigers center Sophie Hart pulls down a rebound. She had 21 points, 16 rebounds and eight assists.

Senior guard Morgan Ebel brings the ball upcourt during the second half.

The Farmington High School band kept Tigers fans revved up during a timeout.

Farmington sophomore Rose Wille drives the baseline during the second half.

Senior forward Katelyn Mohr scores during the first half.

Late in the second half, the Farmington student section is anticipating victory.

The Tigers celebrate a victory they believed would send them to the state championship game against Hopkins. About 12 hours later they learned their season was over.

Farmington's Paige Kindseth looks for a route to the basket in a state tournament game March 11 against Eden Prairie.

Each year Liz Carpentier knows she has to make an end-of-season speech to her basketball team.

“But you’re giving that speech in a locker room, not a classroom,” she said.

And there’s usually some closure, some finality. But not this year, as the Farmington High School girls advanced to the state Class 4A championship game, only to be denied an opportunity to play. Last Friday the Minnesota State High School league halted all remaining winter sports because of the COVID-19 virus outbreak. Farmington was to play Hopkins in the Class 4A final Saturday night.

Instead, on Friday afternoon, Carpentier gathered her players in a Farmington High classroom to tell them what she knew – which the coach admitted was not much – about the way their season ended.

“There were a lot of questions I couldn’t answer, and nobody else at our school could answer,” she said. “It was emotional; there were a lot of tears. They all wanted to play one more basketball game. I told them the way the season ended doesn’t take away from what they accomplished. They did everything they could and everything we asked of them.”

Even if the game against defending state champion Hopkins took place as scheduled, the Tigers knew things would be different. Most of their cheering section would have been barred from entering Williams Arena. The MSHSL already had decided to limit attendance for the final two days of the state tournament because of concerns about virus spread. By Friday, the COVID-19 situation had escalated to the point the MSHSL decided to end all remaining winter tournaments. Most states that had not already completed their winter high school sports seasons made the same decision.

Carpentier said she held out hope the girls basketball tournament would conclude and all boys basketball section championship games could be played last week, but “I understand the safety concerns.”

The MSHSL posted its decision to end the season on its website and social media channels. The information spread like a brushfire, with many players still involved in the girls basketball tournament finding about it on their phones instead of from their coaches. “I feel really bad about that,” Carpentier said. “I’m not particularly happy with how the high school league handled the communication. Our kids found out about it on social media.”

One question yet to be answered is if the Tigers can call themselves co-state champions. The MSHSL hasn’t announced a decision about that, and there’s likely no rush. One complicating factor is that while classes 4A and 3A had completed their semifinal rounds in the girls basketball tournament, 1A and 2A had only played through the quarterfinals.

The Tigers’ team banquet was to be Thursday night but has been postponed. Carpentier said the team plans to reschedule. When the Tigers assemble for their banquet – whenever that is – they will have a chance to look back with satisfaction on a 29-2 season that ended with a victory.

The Tigers, playing in the state girls basketball tournament for the first time, made an impression. They held off Eden Prairie 58-54 in the Class 4A quarterfinal round March 11, then defeated St. Michael-Albertville 78-59 the next day in the semifinals.

STMA made a tournament-record 13 three-pointers in a quarterfinal victory over Lakeville North. The Knights knocked down 10 more against Farmington, but it wasn’t enough to overcome a relentless performance by Tigers junior center Sophie Hart, who was two assists from a triple-double with 21 points, 16 rebounds and eight assists.

“Sophie is a phenomenal passer,” Carpentier said. “When she draws a double team, you can tell she knows where the openings are. Our team did a great job of cutting and slashing to the basket to set up those plays.”

Eden Prairie was determined to prevent Hart from getting shots in the quarterfinal round; she took only six in that game although she pulled down 16 more rebounds. STMA gave Hart more room to play her game, and she thrived.

St. Michael-Albertville never led after the first two minutes of the game but did tie the score at 44-44 with 11 minutes remaining after making its fifth three-pointer of the second half. A three-pointer by junior guard Peyton Blandin (who led Farmington with 22 points) put the Tigers back in front to stay. Farmington outscored STMA 34-15 over the final 11 minutes.

“We dominated the paint, and that was one of our goals,” Carpentier said. “We turned it up defensively in the second half, and most of our shots came on offensive rebounds and just looking inside.”

Hopkins had won 62 consecutive games, with the Royals’ last loss coming to Eastview in the 2018 Class 4A championship game. The Royals defeated Farmington 77-52 in a regular-season game Dec. 6.

The Tigers’ challenge would have been trying to contain Hopkins guard Paige Bueckers, the Gatorade National Player of the Year and a prohibitive favorite for the Minnesota Miss Basketball award.

“Stopping a player like Paige is a difficult task. She has so many parts to her game that are difficult to stop,” Carpentier said after Farmington defeated St. Michael-Albertville.

But the Tigers wanted the chance to try. “Playing that game in December on our home court, we had kids who weren’t ready for the big game,” Carpentier said. “Now they are. You can tell from our last three games going back to the section final, we’ve won some pretty big games, close games. We’ve had different kids step up in every single game.”

Blandin had 18 points, Kindseth 13 and Mohr 11 in the semifinal victory over Eden Prairie. Kindseth also had 10 rebounds.

Mogensen will play college basketball at Creighton University, while Ebel will play at the College of St. Benedict. Mohr has signed with Minnesota Duluth to play softball.

The end of the season might have been toughest on Mogensen, who in November became her school’s career scoring leader but was forced to the bench by February because of a broken bone in her foot.

“The biggest thing is just missing playing with my teammates. They’re my best friends. We do everything together,” she said. “I just miss playing with them, I miss being out there in the huddles and stuff and talking to them and feeling their energy.”

Mogensen said she expected to be off crutches in a few days, after which she would wear a walking boot for several weeks.

The core group of seniors and juniors fulfilled the promise that had been seen in them several years earlier.

“When I took over as head coach they were in seventh and eighth grade,” Carpentier said. “The girls who are juniors now were state champions as eighth-graders. We believed they were going to be a special group, and they are. They’ve made an impact. We have a lot of girls in our community who play basketball now.”