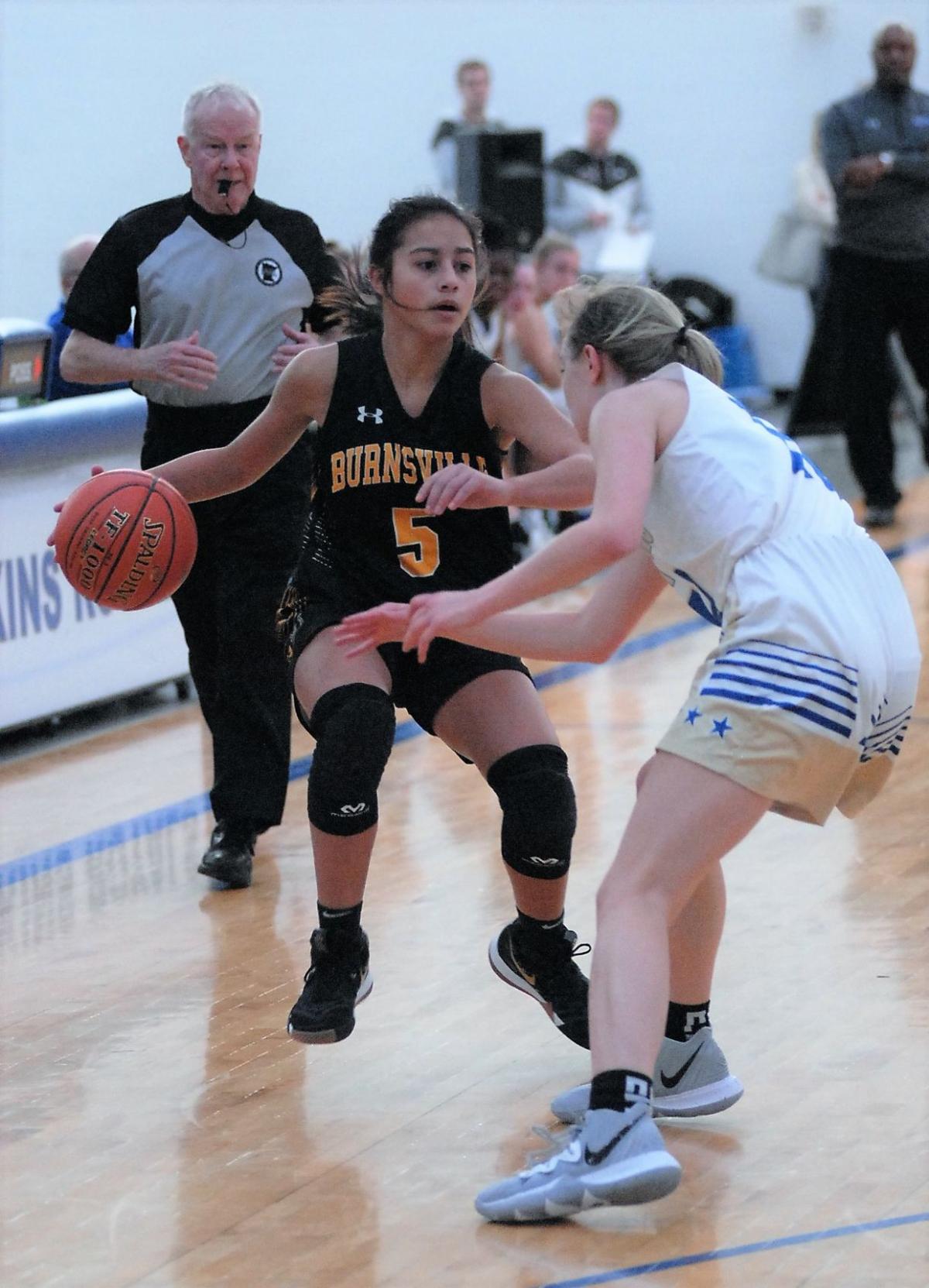 Burnsville guard Shawna Bruha looks to attack the basket in a recent game against Holy Angels. 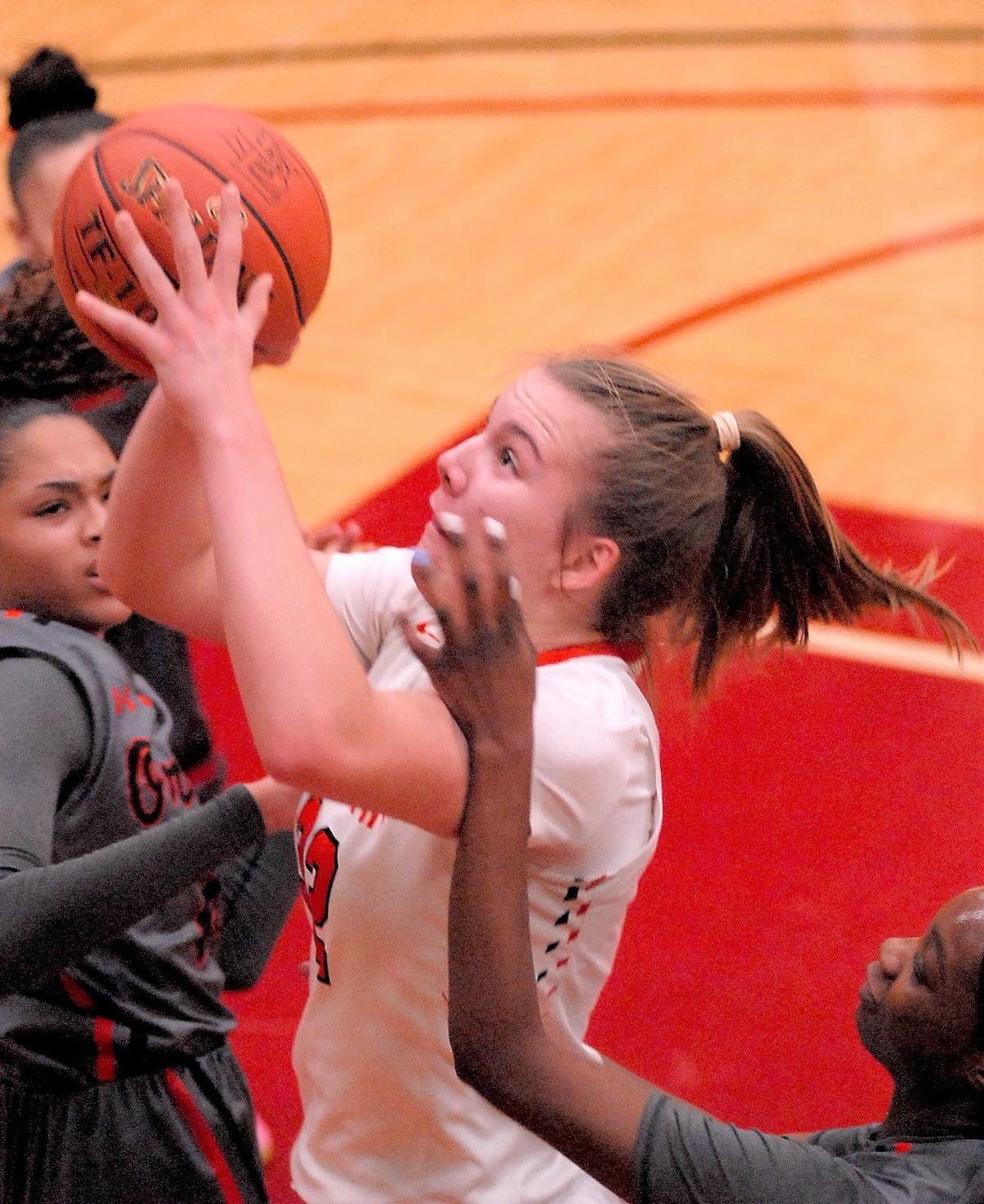 Farmington center Sophie Hart draws a crowd near the basket during a game Nov. 29 against St. Louis Park. 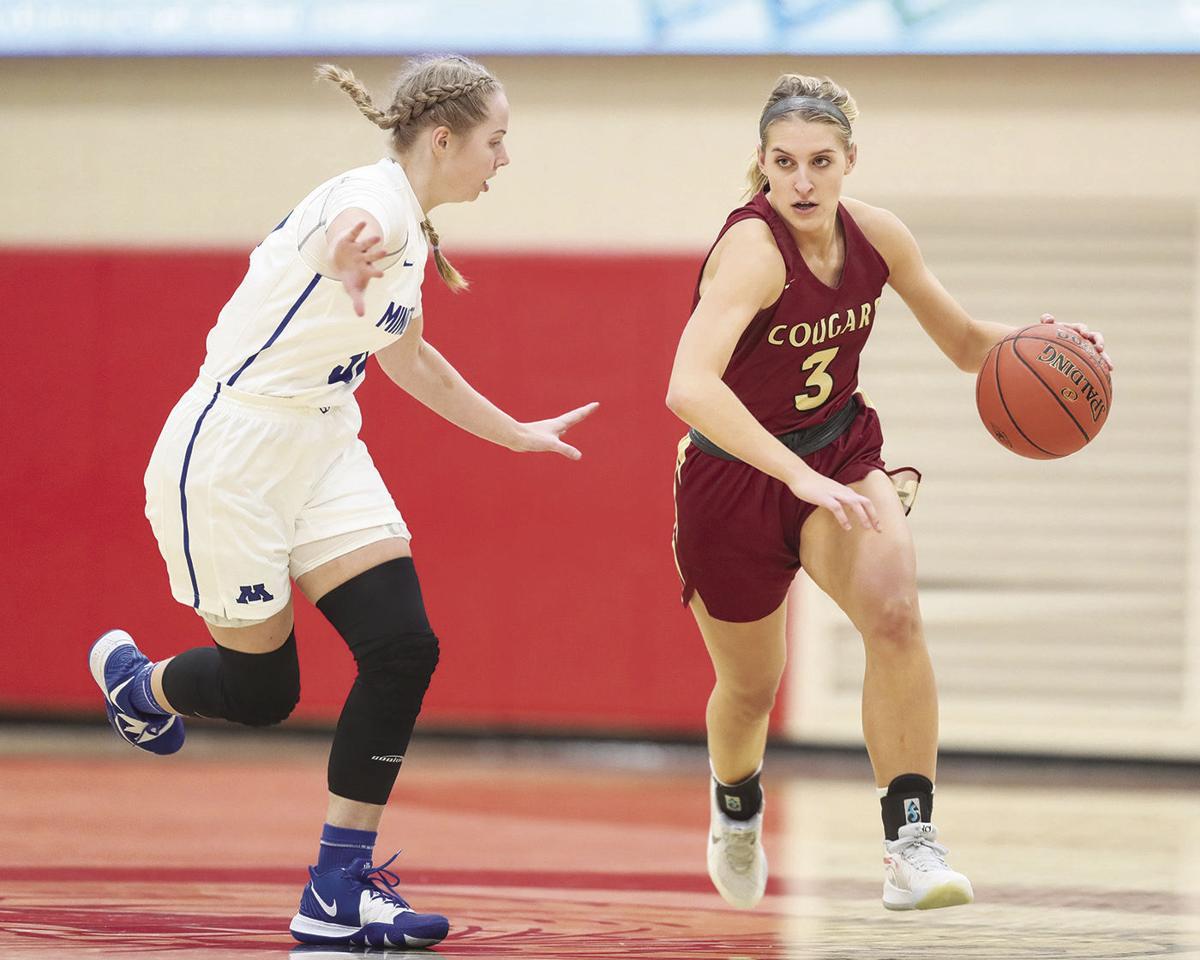 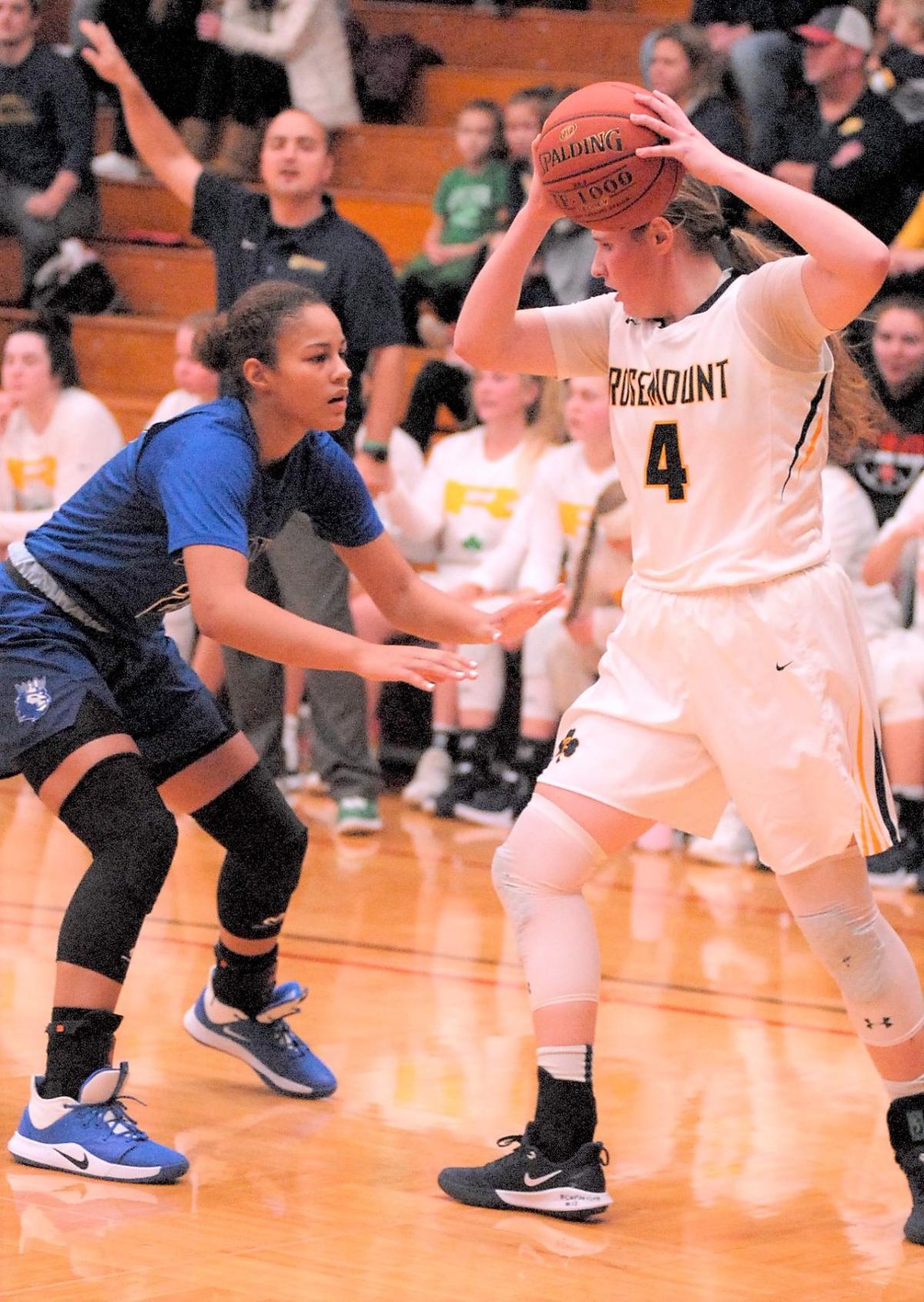 Helen Staley of Rosemount looks to bring the ball upcourt against Taylor Woodson of Hopkins during the Pat Paterson Invitational last weekend at Hamline University. 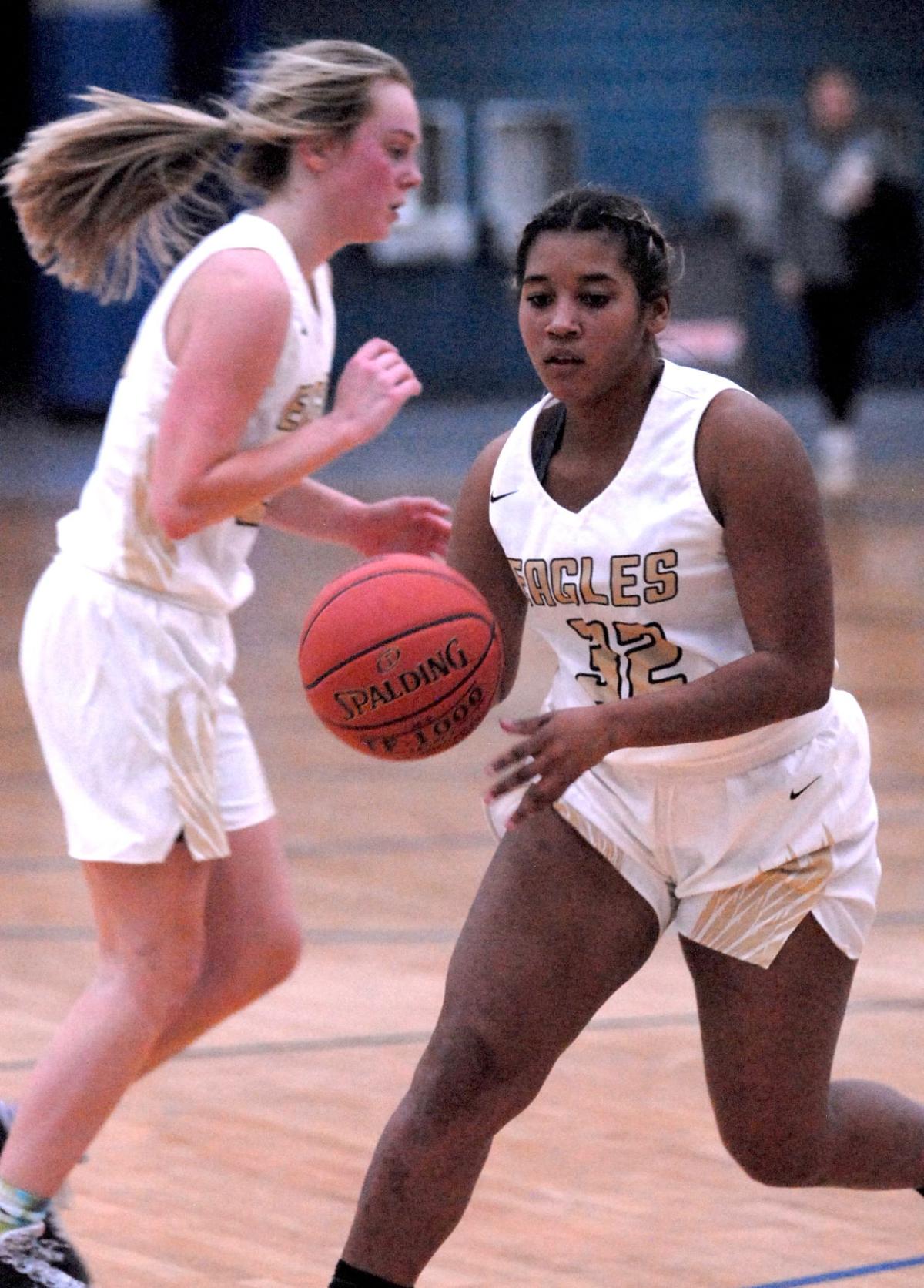 Kalena Myers of Apple Valley looks for a path to the basket during a recent game against Centennial.

Burnsville guard Shawna Bruha looks to attack the basket in a recent game against Holy Angels.

Farmington center Sophie Hart draws a crowd near the basket during a game Nov. 29 against St. Louis Park.

Helen Staley of Rosemount looks to bring the ball upcourt against Taylor Woodson of Hopkins during the Pat Paterson Invitational last weekend at Hamline University.

Kalena Myers of Apple Valley looks for a path to the basket during a recent game against Centennial.

Farmington is the team to beat in South Suburban Conference girls basketball, and several other teams in the league are ready to take their shot.

Conference games start next week. Farmington, which returns most of the lineup from last year’s conference champion, started 3-0 and plays defending Class 4A champion Hopkins at home on Friday night.

SSC contenders include Eastview, which has reached the state tournament the last eight years; Lakeville North, which knocked off Farmington in the 2019 Section 1 final; and Rosemount, which was one point from qualifying for state last season and returns most of its top players.

Outlook: The Eagles started the season 15th in the Class 4A rankings, but a rough start against quality competition dropped them out of the top 20. The roster is deep in guards; returnees Chyna Young, Anna Mutch and Kalena Myers were among Apple Valley’s top five scorers last season. Twelve of the 18 players in the varsity/junior varsity group are sophomores or younger, and the key for the Eagles might be how quickly they develop.

Next game: vs. Park of Cottage Grove at home, 7 p.m. Saturday.

Outlook: The Blaze are quietly becoming a program to take seriously. After an opening loss to Class 3A power Holy Angels, routs of Henry Sibley and Bloomington Jefferson vaulted Burnsville to 19th in the Class 4A rankings. Guards Zhane Thompson and Paige Servais, two of the four seniors on the roster, averaged 15.3 and 12.7 points through the first three games. Two other returnees, Morgan Krumweide and Megan Diggan, were Burnsville’s second- and third-leading scorers last season.

Outlook: Returnees such as Morgan Eckerle, Taylor Grebin, Jocelyn Plonski and Lily Fandre will try to put the Wildcats on the path to improvement. Each of those four averaged at least five points a game last season. Eckerle had 13 points and Fandre 12 in the season-opening victory over Park.

Outlook: Challengers are lining up to try to end Eastview’s streak of eight consecutive Section 3 championships (the Lightning also won two state titles in that span). Eastview will counter with junior guard Cassidy Carson, one of the state’s top players in the class of 2021, and senior forward Brynn Schwanz. The rest of the Lightning lineup will need time to develop as Carson and Schwanz are the only two players who averaged more than two points a game last season.

Outlook: The Tigers return most of the top players from a team that won the South Suburban title last season. Senior guard Molly Mogensen (the school’s career scoring leader), junior center Sophie Hart, and junior guards Paige Kindseth and Peyton Blandin lead a deep, versatile roster. Even though it will be only the fourth game of the season, Friday’s home contest against defending state champion Hopkins could be a benchmark for the Tigers.

Next game: vs. Minneapolis North at home, 7 p.m. Thursday.

Outlook: Two of the South Suburban’s top guards, Lauren Jensen and Sarah Kuma, occupy the same backcourt at Lakeville North. Jensen, who has signed with the University of Iowa, averaged 26 points last season with a high of 47 and scored the winning basket in the Panthers’ upset of Farmington in the Section 1 final. Kuma, headed to Concordia-St. Paul, averaged about 11 points. Ashleigh Fossey, Abby Ruhland and Ellen Glomstad are among players who got some varsity experience last season.

Outlook: The Cougars have a strong foundation with senior guard Annie Guentzel and senior forward Haylee Wheeler. Guentzel (who signed with Wayne State) and Wheeler (headed to Minnesota Crookston) were South’s second- and third-leading scorers last season. Senior guard Amanda Drake, junior forward Adi Brown and sophomore guard Ally Schultz are among other Cougars players who look ready to step in and contribute.

Outlook: Most of the players are back from a Rosemount team that lost to Eastview by one point in the 2019 Section 3 final. Senior forward Taylor Janssen has signed with Division I Montana State. Other top returnees for the Irish include junior forward Helen Staley, junior guard Ivory Finley and sophomore guard Alexa Ratzlaff. Senior guard Larisa O’Neil made nine three-pointers in Rosemount’s season-opening victory over Waconia. The Irish expect to play at a faster pace than they’ve shown the last few years.