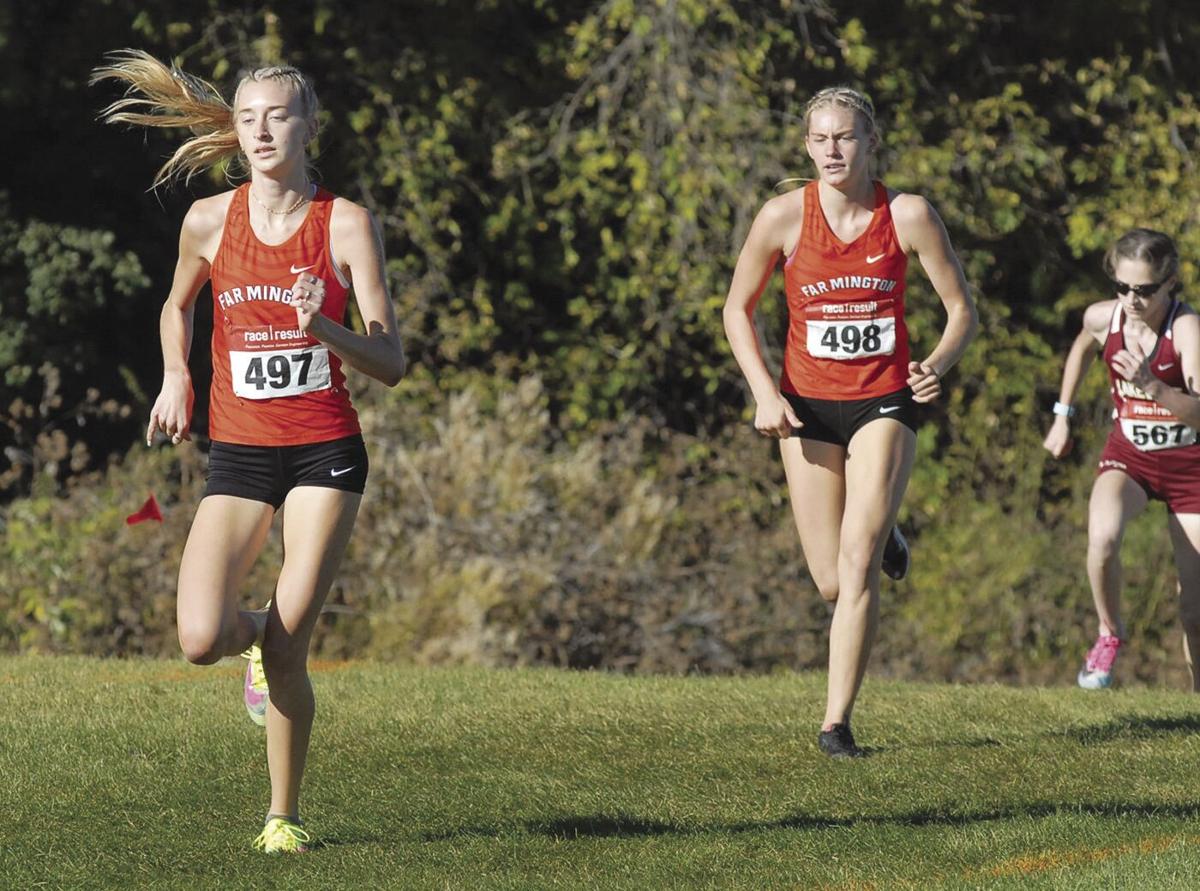 The Fenske sisters - Anna (left) and Mariah - took the lead in their race at the South Suburban Conference cross country championships. They were the top two finishers overall in the girls race. 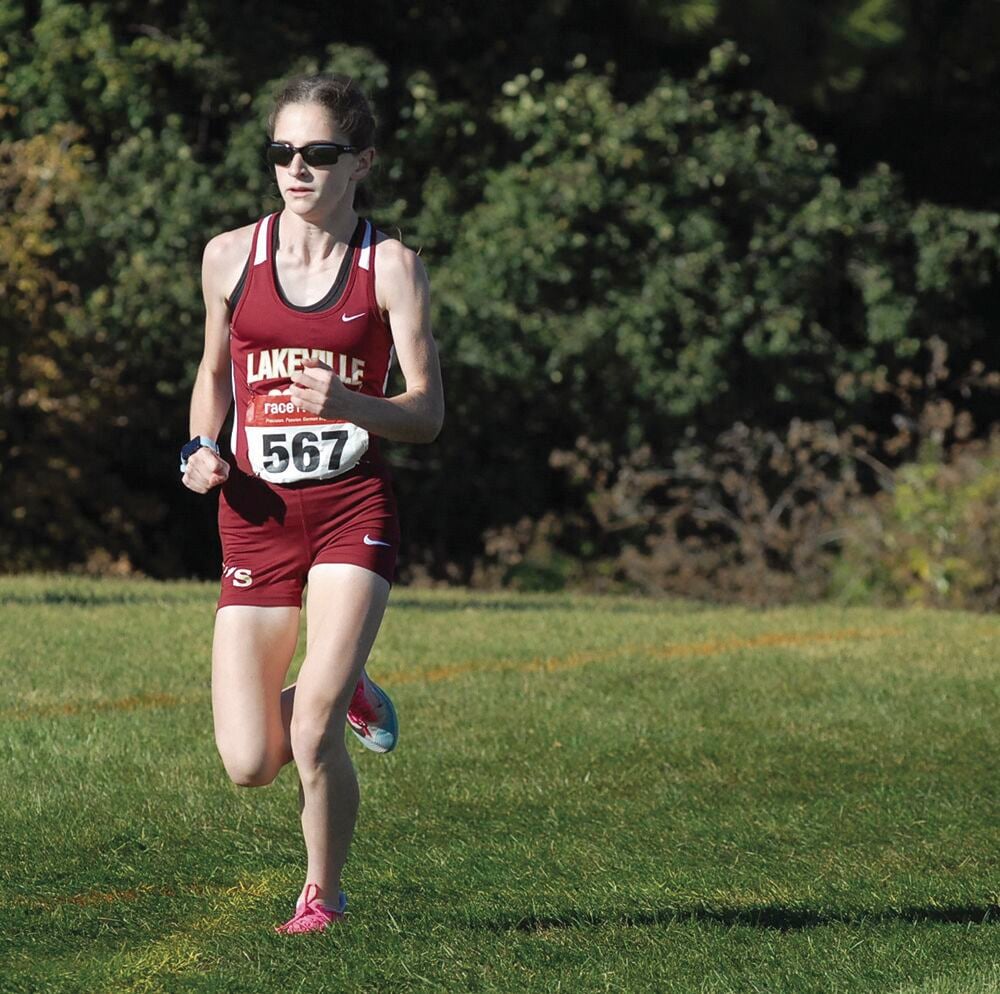 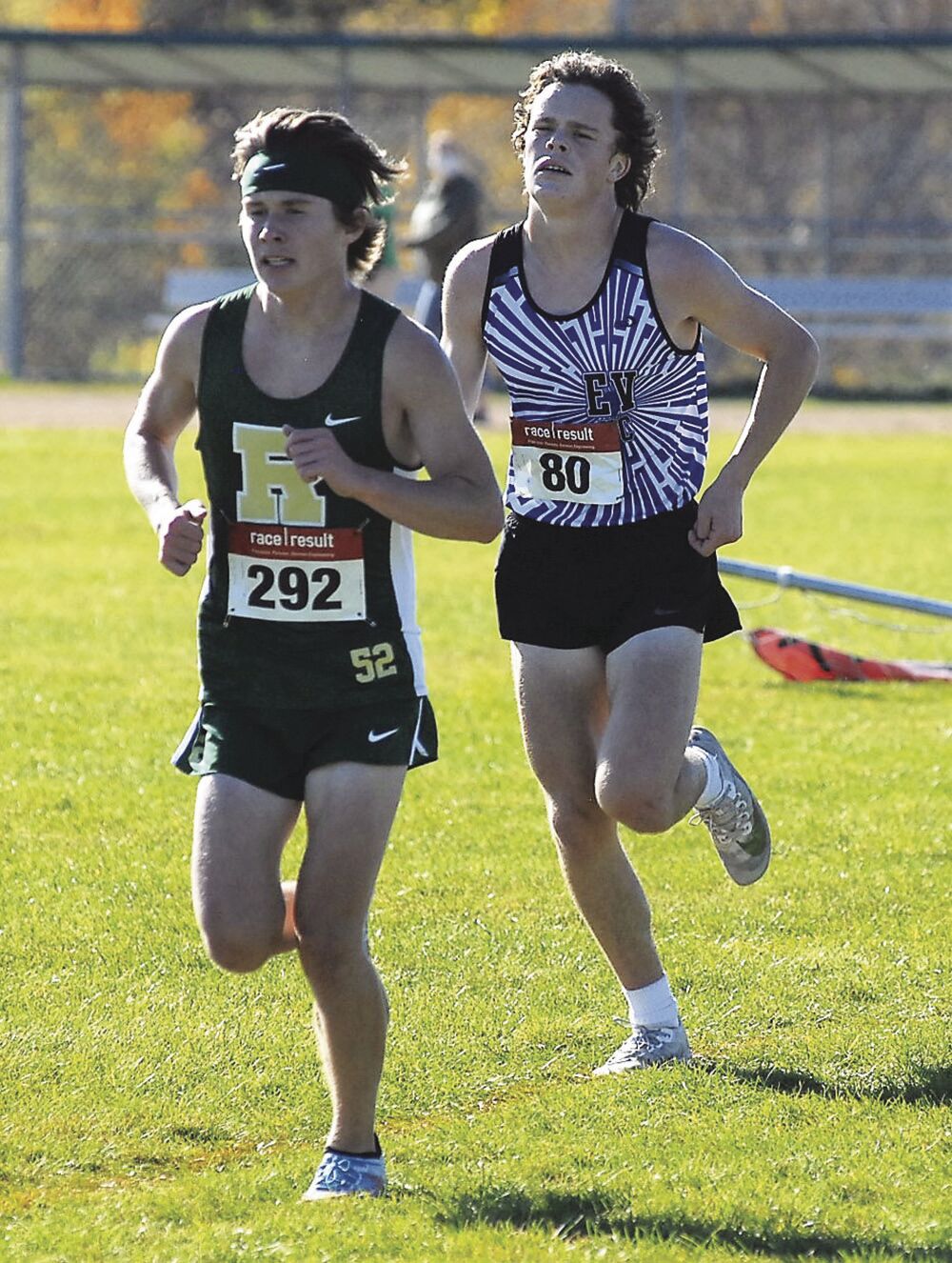 Anders Roback (left) of Rosemount and Grant Piller of Eastview push to the finish of the boys 5,000-meter race at the South Suburban Conference championships.

The Fenske sisters - Anna (left) and Mariah - took the lead in their race at the South Suburban Conference cross country championships. They were the top two finishers overall in the girls race.

Anders Roback (left) of Rosemount and Grant Piller of Eastview push to the finish of the boys 5,000-meter race at the South Suburban Conference championships.

The South Suburban Conference cross country championships returned to their usual location at Eagan High School on Saturday. But, with COVID-19 precautions forcing changes in how meets are conducted, the event took place in four shifts, similar to what took place in regular-season conference meets. For Saturday’s championships, teams were grouped according to their finishes in the regular-season meets.

Farmington’s girls ran with Rosemount and Lakeville South in a triangular that was the final race of the day. The Tigers not only won the triangular but posted the lowest team score overall of 27 points, finishing 40 ahead of South. It’s the fourth consecutive conference championship for Farmington, which also had the three fastest individual runners (Anna Fenske, Mariah Fenske and Mackenzy Lippold) in the meet.

The final boys triangular placed the top two runners in the state Class AA rankings, Gabriel Mahlen of Eastview and Gabe Smit of Prior Lake, in the same race. Mahlen, however, had to drop out of the race because of an injury with 1.5 miles remaining. Smit won the individual title by about nine seconds over Brennen Peterson of Rosemount, who also ran in the final triangular. The Lakers cruised to a 55-point victory over Rosemount in the overall team standings.

Eastview and Eagan were second and third in a triangular that Prior Lake won. The Lightning were fifth and Wildcats sixth in the overall standings.

Eagan junior Rina Aschemann was second in her triangular and eighth overall in 19:35.9. Josie Seehafer finished 23rd, and Ava Ligtenberg and Catalina Decker were 26th and 27th.

Shakopee defeated Lakeville North 24-31 in a dual meet, and North was eighth overall. Top runners for the Panthers were ninth-grader Ella Raiche, who finished 31st, and seventh-grader Sophia Olson, who was 37th.

Brennen Peterson finished second overall in 16:27.0, as he helped lead Rosemount to second place overall and second in its triangular with Prior Lake and Eastview.

Eastview dropped to fourth in the overall team standings after Mahlen’s injury. The Lightning likely would have finished second had their top runner been healthy.

Hunter Dunne (10th, 16:44.0) and Nathaniel Getman (14th, 16:48.1), both juniors, earned all-conference status for Eastview. Sam Setterlund finished 22nd and was only about three seconds from the all-conference cutoff.

A tiebreaker was required to decide a triangular between Lakeville South, Eagan and Lakeville North. South and Eagan tied at 35 points. Lakeville South won the tiebreaker as the Cougars’ sixth finisher, Lucas Pessanha, came in two places ahead of Eagan’s No. 6.

The Lakeville South-Eagan dual also unveiled a scoring oddity – although Eagan was second to South in the triangular, once all 10 teams were scored the Wildcats were third, two places ahead of South.

Lakeville North was third in the triangular with Eagan and Lakeville South and sixth overall. Earning all-conference for the Panthers were sophomores Bryce Stachewicz (15th, 16:50.9) and Andrew Casey (20th, 17:04.4).

Leading Burnsville runner was senior Matthew Krzmarzick, who was 23rd overall in 17:07.3. Zachary Friedmann was 34th and Everett Sandbo 43rd.