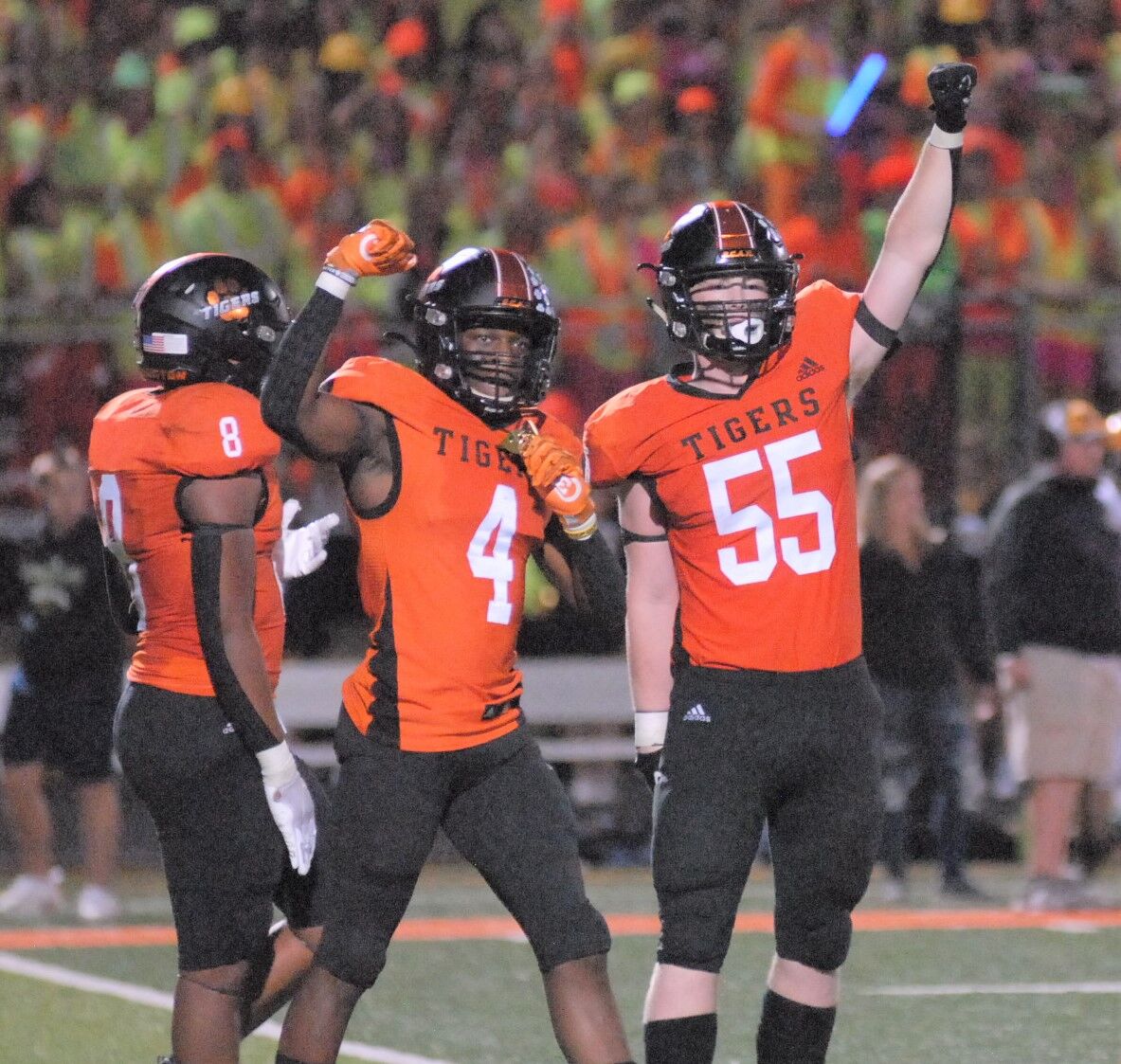 Farmington's Richie Frimpong (4) and Zach Dahl celebrate a big play that went the Tigers' way during a 13-3 homecoming victory over Rosemount on Oct. 8. 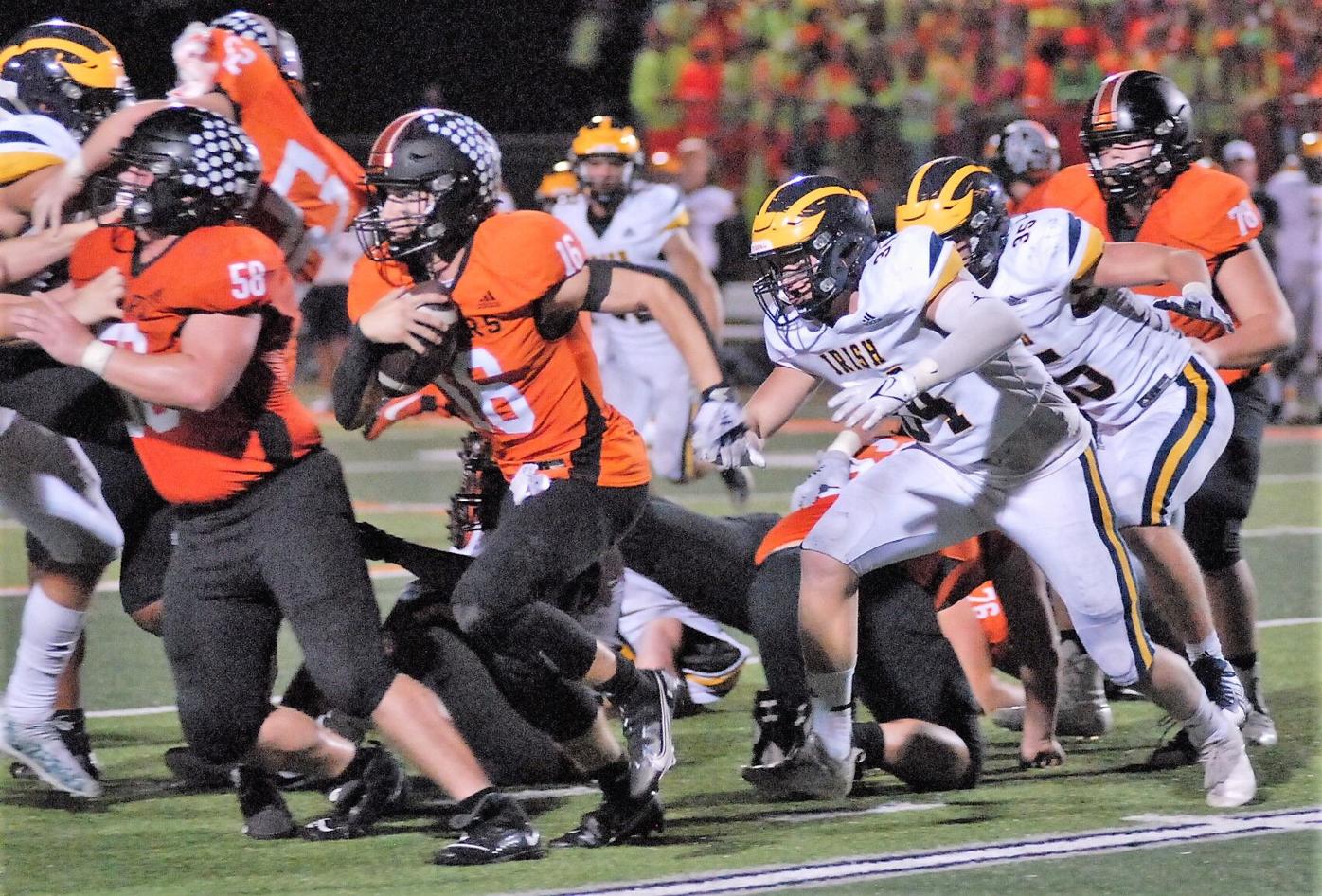 Farmington quarterback Connor Weed looks for room around the end when a play breaks down in the second half of an Oct. 8 football game against Rosemount at Tiger Stadium. Hayden Bills (34) is one of the Rosemount players in pursuit.

Farmington's Richie Frimpong (4) and Zach Dahl celebrate a big play that went the Tigers' way during a 13-3 homecoming victory over Rosemount on Oct. 8.

Farmington quarterback Connor Weed looks for room around the end when a play breaks down in the second half of an Oct. 8 football game against Rosemount at Tiger Stadium. Hayden Bills (34) is one of the Rosemount players in pursuit.

Anybody who thought Farmington wasn’t suited for low-scoring, hard-hitting, physical football might have to reconsider.

The Tiger defense, which had allowed 63 points in a game against Shakopee earlier this season, bared its teeth in a 13-3 homecoming victory over Rosemount on Oct. 8.

Farmington’s offense, which features multiple-receiver sets and spreads the field, handed the ball to senior Rod Finley 30 times and he responded with 201 yards and both Tiger touchdowns.

It seemed atypical for a team that’s usually involved in high-scoring games, but the Tigers’ Zach Cochnauer said he wasn’t surprised.

“We dominated up front,” said Cochnauer, a 6-foot-5, 300-pound all-district offensive tackle. “Their D-line wanted no part of us and our defense played a heck of a game. It was a great game all around. That’s why we came up with the victory.”

The Tigers (3-3), who lost three in a row to top-10 teams Eden Prairie, Shakopee and Lakeville South, may have righted themselves with back-to-back victories over Edina and Rosemount. The Irish, meanwhile, lost their third in a row after starting 3-0.

But last week Farmington played like a team that believes it can compete on equal terms against its neighbor to the north.

“I can’t say enough about the way our defense played,” co-head coach Rick Sutton said. “They’ve struggled in a few games, but tonight they were lights out. They were rallying to the football, making plays all night long. And our offensive line was just unbelievable.”

Finley scored on a 1-yard run in the second quarter to put the Tigers ahead, one play after a 48-yard run by Finley put Farmington near the Rosemount goal line. Rosemount’s Leyton Simmering kicked a 37-yard field goal with one second left before halftime, but Finley extended the Farmington lead with another 1-yard run early in the fourth quarter.

The biggest sequence came in the third quarter when Rosemount’s Miles Townsend recovered a Farmington fumble at the Tigers’ 35. With a chance to tie the game or take the lead, the Irish came up short on fourth and less than a yard at the Farmington 26. The Tigers then drove 74 yards, finishing with Finley’s second touchdown.

“We had a couple of big fourth-down stops,” Sutton said. “That’s being physical, being in the right spot, reading your key and just doing your job. The kids were awesome.”

Rosemount’s offense has struggled lately, failing to score a touchdown in two of its last three games. Farmington held the Irish below 200 yards.

“We had to try to contain the quarterback and keep him from hurting us running, but he still made a couple of plays because he’s a good athlete,” Sutton said.

Jayden Washington was Rosemount’s leading rusher with 73 yards on 16 carries.

Farmington quarterback Connor Weed completed 10 of 14 passes for 101 yards, with Ben Buesgens and Brendan Ebel having four receptions each.

Buesgens, who also rushed for 33 yards, said the Tigers needed small fixes, not radical changes, to stop their losing streak. “It’s been small mistakes that set us back and got us down early in games,” he said. “It was all the mistakes we made in the earlier games that we fixed for this one that set us apart.”

The teams have more games to play. Farmington is home against Lakeville North (2-4) at 7 p.m. Thursday and Rosemount plays at Prior Lake (3-3) at 7 p.m. Friday. But there are few opportunities in a high school career to play a homecoming game, never mind win it.

“The whole student body’s out here, teachers, all our fans supporting us. It was awesome,” Cochnauer said.

“It’s huge, obviously. A homecoming win is a homecoming win. It’s something that’s going to live on my whole life,” Buesgens said. “It means a ton, not just because it’s (against Rosemount), but because of the whole homecoming experience.”