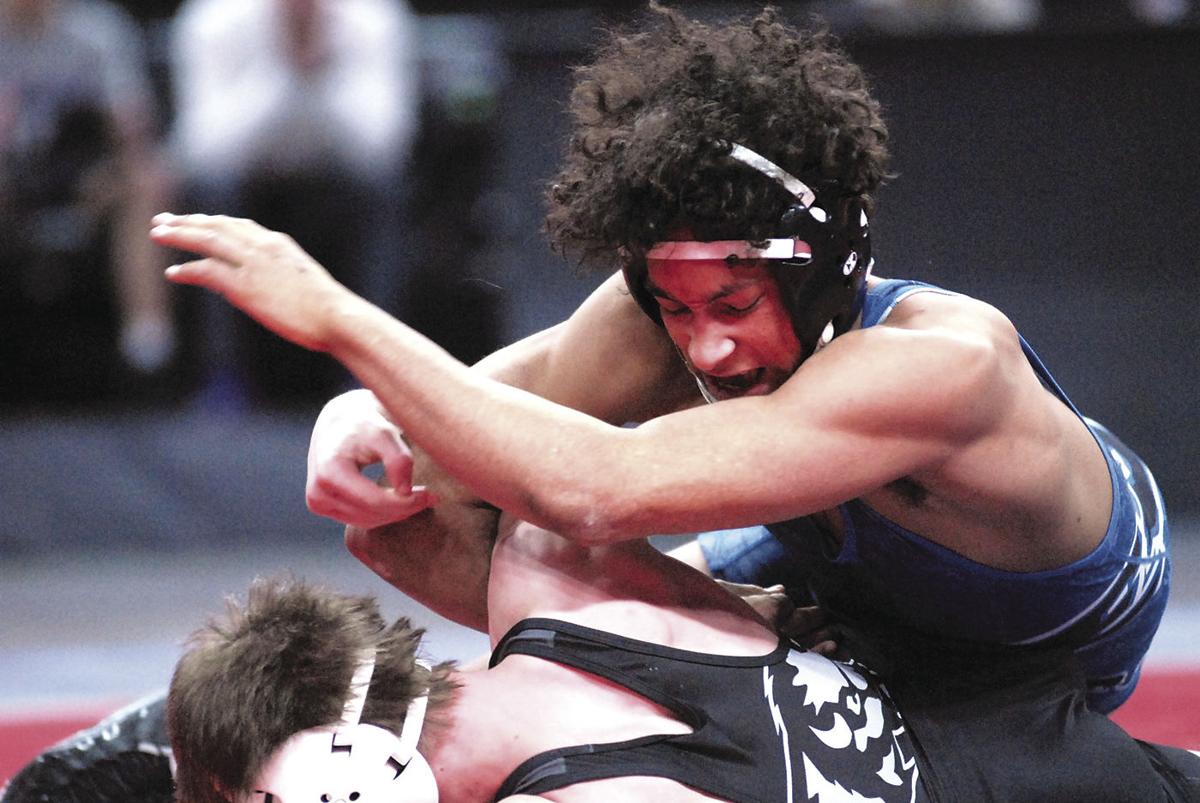 Eastview senior Roman Gilbert takes down Ryan Scherber of Buffalo in the Class 3A third-place match at 132 pounds at the state Class 3A wrestling tournament Saturday. 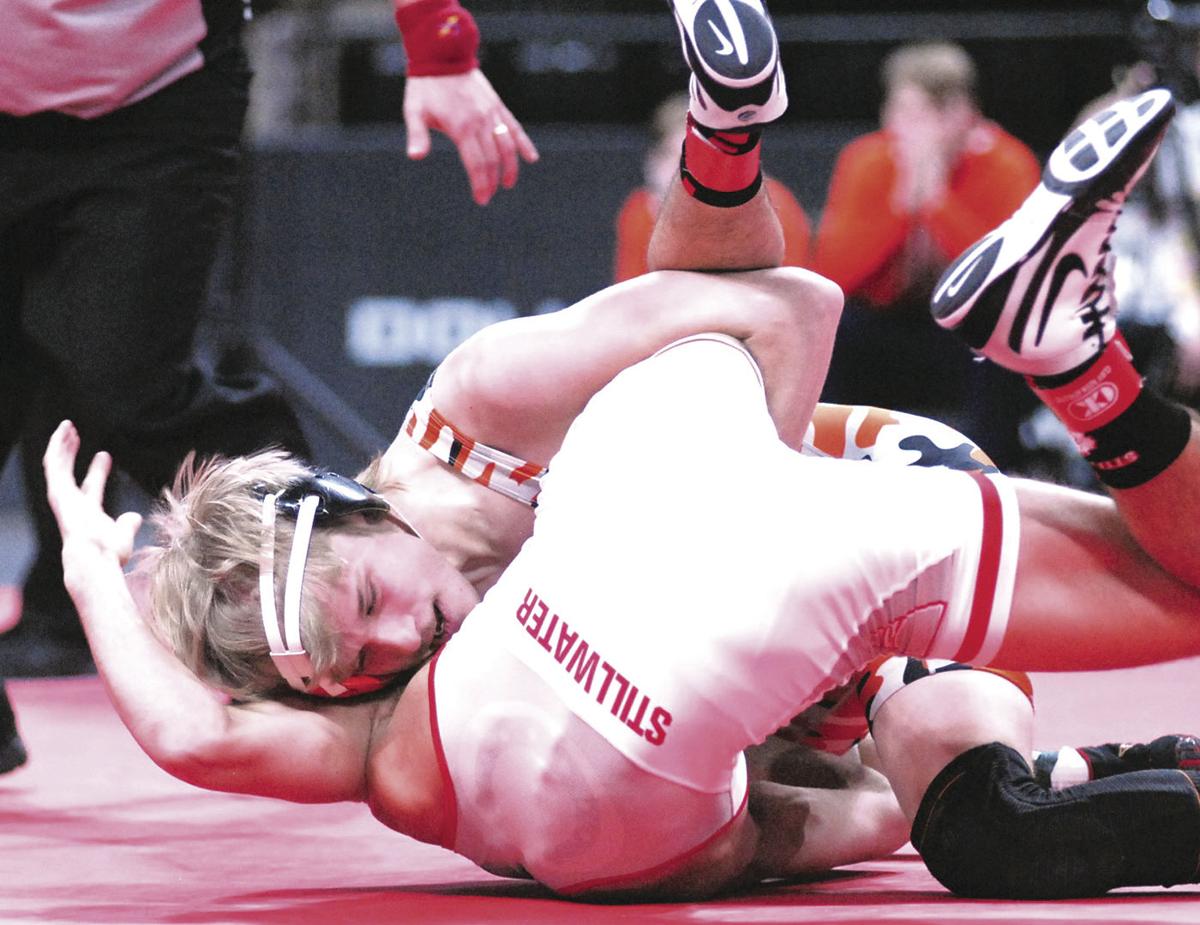 Farmington’s Luke Peterson scores a nearfall in the first period against Trey Kruse of Stillwater in the Class 3A 145-pound championship match. Kruse got off the match and rallied to win 7-4. Peterson’s runner-up finish was his best in four appearances at the state tournament.

Eastview senior Roman Gilbert takes down Ryan Scherber of Buffalo in the Class 3A third-place match at 132 pounds at the state Class 3A wrestling tournament Saturday.

Farmington’s Luke Peterson scores a nearfall in the first period against Trey Kruse of Stillwater in the Class 3A 145-pound championship match. Kruse got off the match and rallied to win 7-4. Peterson’s runner-up finish was his best in four appearances at the state tournament.

Getting to the state tournament was an unexpected gift for Eastview senior Roman Gilbert. Competing for a medal and winning on his final day as a high school wrestler? Even better.

Gilbert, a Lightning senior captain, questioned whether he was good enough to wrestle in the state tournament almost until the time he got there.

“I’d been third in the section every year. It just sucked,” said Gilbert. “And I thought I was going to get third again this year.”

But this season he powered through the section tourney and reached state, finishing third in a strong Class 3A 132-pound bracket. The last of his 40 victories was a 14-6 decision over Buffalo’s Ryan Scherber in the third-place match Saturday at Xcel Energy Center. It was the second time Gilbert defeated Scherber in the state tourney.

“Not many kids win their final high school match. He wrestled great,” Eastview coach Kurt Habeck said. “He’s a great kid, motivated, a hard worker and pretty dang athletic. He’s also a kid that didn’t have all the confidence in the world and has never been to things like this, so for him to come to a big arena and perform well is amazing for him and his family.”

Second was Ben Lunn of Shakopee, who defeated Gilbert in the Section 2 championship match and state semifinals. Being on the awards podium with wrestlers of that caliber meant a lot, Gilbert said.

“I used to think I was not going to be good enough to place in the state, or even go to state,” he said. “I think that changed when I saw my name on the Guillotine (state rankings). That really showed if I worked hard enough I could get up there.”

Gilbert’s highest regular-season ranking was eighth at 138 pounds. Getting through the section tournament was going to be tough enough, with that section drawing wrestlers from two of the top four teams in the state Class 3A rankings (Shakopee and New Prague).

“In 10th grade, third in the section was a good finish for him,” Habeck said. “Even last year he felt good about placing third because he knew the two kids who finished ahead of him were really good. For him, it was just about having a goal of improving and being at the state tournament.

“He’s a kid that started wrestling in ninth grade. He kept improving, never gave up. It’s a great story.”

Gilbert, who finished 40-10, said his state tournament goals included beating Wayzata ninth-grader Adam Cherne and Blaine sophomore Luke Studer if he faced them. Cherne defeated Gilbert in the regular season. Gilbert had been scheduled to face Studer once, but Studer forfeited.

Wrestling at state took some getting used to, considering Gilbert had never done it before.

“It’s just a big atmosphere, really loud,” he said. “For me, it gives me a ton of nerves, gets in my head. So I have to try to block everything else out and focus on one thing, which is the match I have ahead of me.”

Gilbert became the seventh Eastview wrestler to place third or higher in the state tournament. He said he wants to wrestle in college and is looking at options. Habeck said Gilbert would be a good get for a college program.

“He’s a senior captain who just does his work,” the coach said. “Kids respect him for his demeanor and how he communicates with everybody. He has zero ego. He’s kind of a mat rat. He enjoys good wrestling, watches college wrestling, and that’s really helped him.”

Eastview junior Kellen Stewart qualified for state at 285 pounds and lost two close decisions to finish 25-15. Stewart lost 3-1 in the first round to Chase Smith of Bemidji, the eventual third-place finisher. He was edged 2-1 by Vincent Gladbach of Minneapolis Washburn in the first round of wrestlebacks.

The top two wrestlers in the Class 3A 145-pound rankings were Trey Kruse of Stillwater and Luke Peterson of Farmington, so it was no surprise when they faced each other in the state championship match.

They delivered an action-packed first period, with each scoring takedowns and nearfalls before the period ended with Kruse up 6-4. Kruse scored the only point of the final two periods on an escape to win 7-4.

Peterson finished a 40-3 season with his fourth appearance at the state tournament and second medal (he finished fourth at 145 in 2019).

Earlier in the tournament Peterson pinned Cole Ciardelli of Wayzata, defeated Ryan Luthi of Moorhead 10-0 and decisioned Alex Kowalchyk of Coon Rapids 7-3. That got him to the finals against Kruse, whose victory gave him a 51-1 record.

Peterson, who will wrestle at Southwest Minnesota State University, won 114 matches over the last four years, all of which ended with trips to Xcel Energy Center for appearances in the state tournament.

Apple Valley senior Dylan Anderson earned a state medal for the second consecutive year, finishing fifth at 160 pounds in the Class 3A tournament. Anderson (40-7) won three of five matches in the state tourney, finishing by pinning Buffalo sophomore Owen Herbst in 38 seconds in the fifth-place match.

Anderson’s other victories at state were by fall over Colton Hinrichs of Bemidji in the first round, by fall over Jordan Todd of Eden Prairie in the wrestlebacks and by decision over Demetrius Seals of Coon Rapids in wrestlebacks.

Anderson, who finished fifth at 152 in the 2019 state tournament, will wrestle in college at Minnesota State Mankato.

Gage was 2-2 in the 152-pound bracket to finish his senior season 28-15. His victories were by fall over Willmar’s Jonah Anez in the first round and by fall over Caidon Williams of Osseo in the wrestlebacks.

Wildcats senior Noah Kipp was 0-2 at 145 to finish 20-16. Junior Diego Villeda faced unbeaten Gavin Layton of Coon Rapids in the opening round at 285, losing 7-3. Villeda lost his first wrestleback match to finish 30-13.