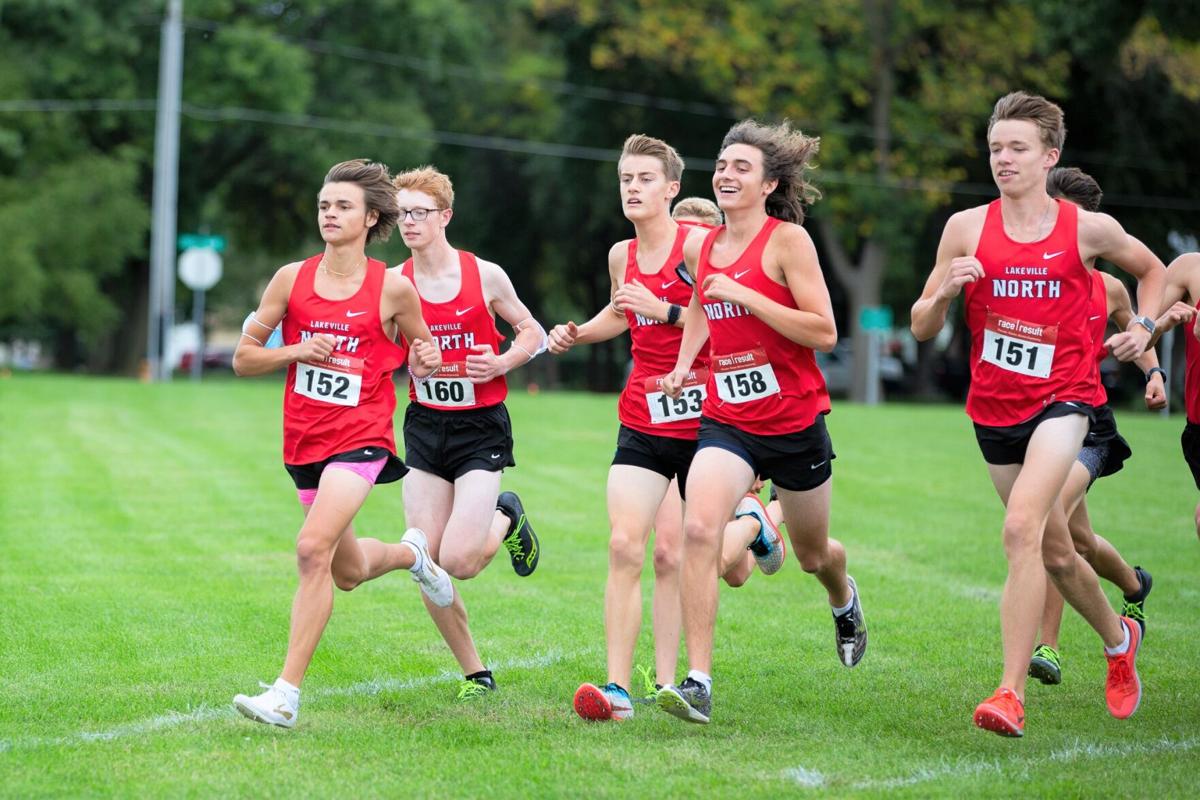 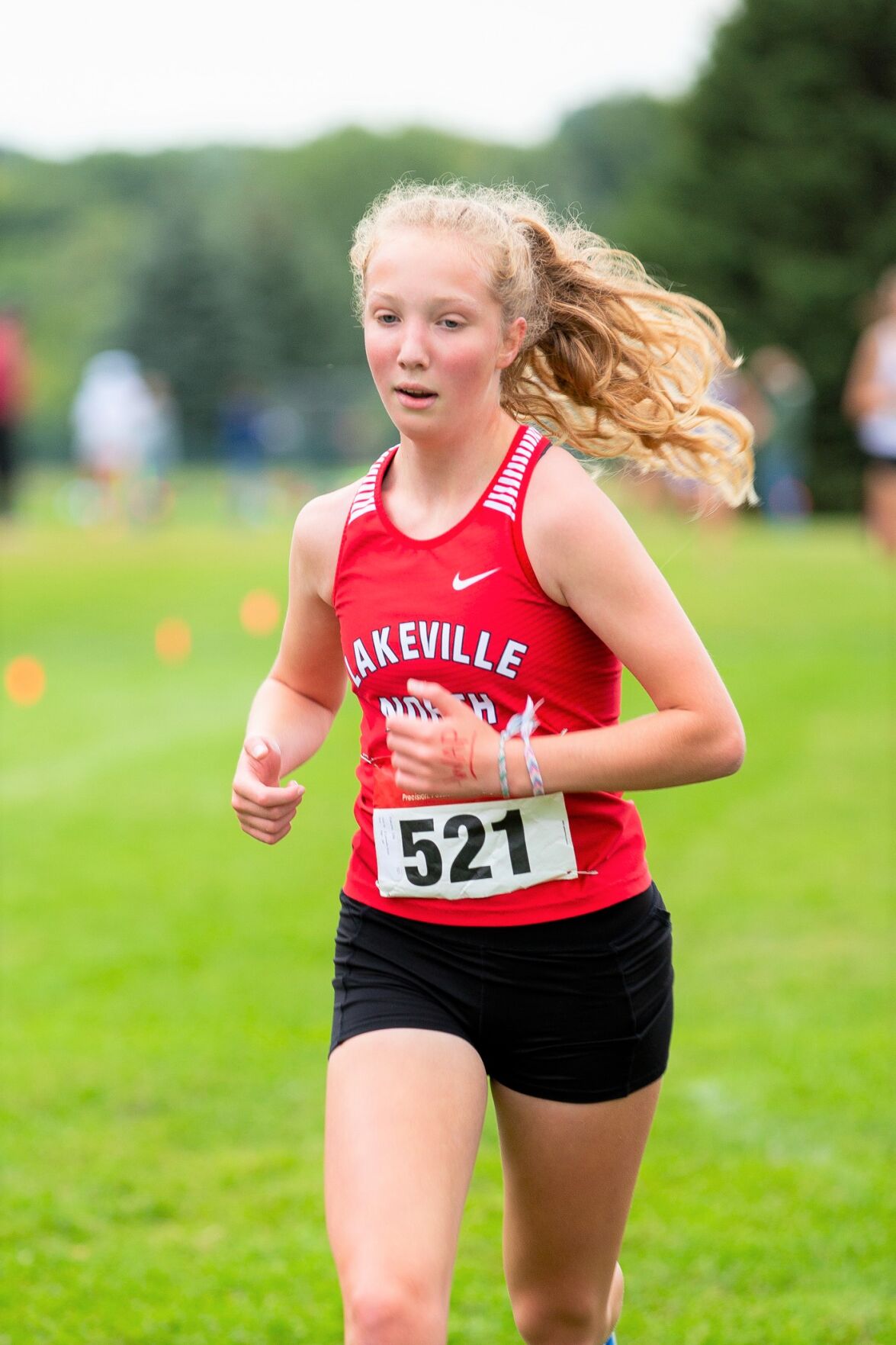 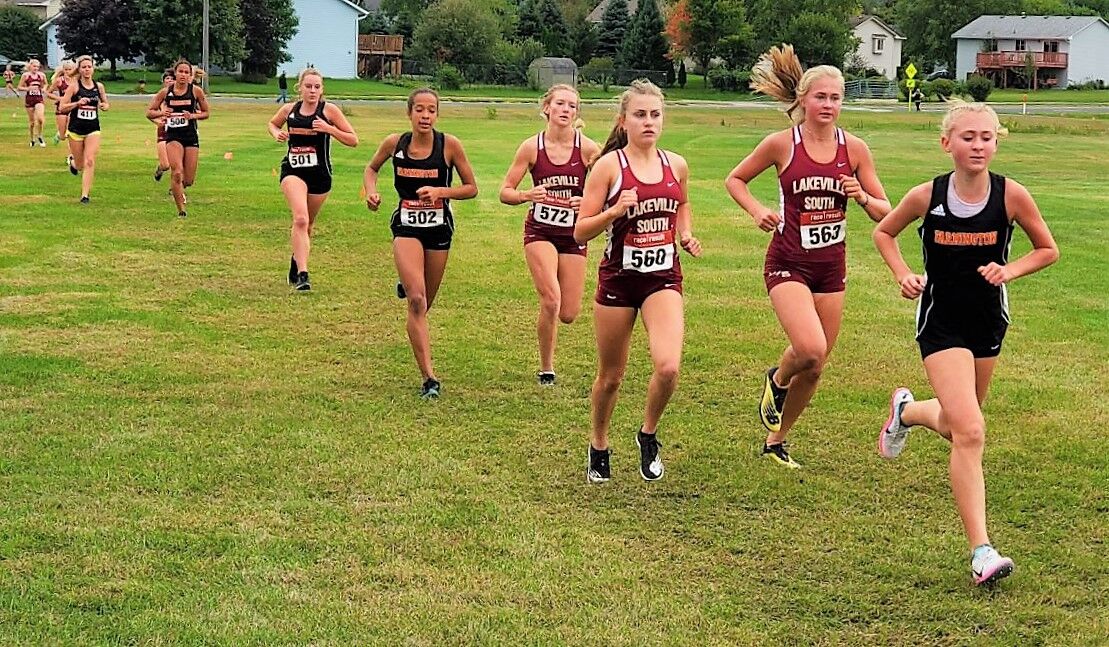 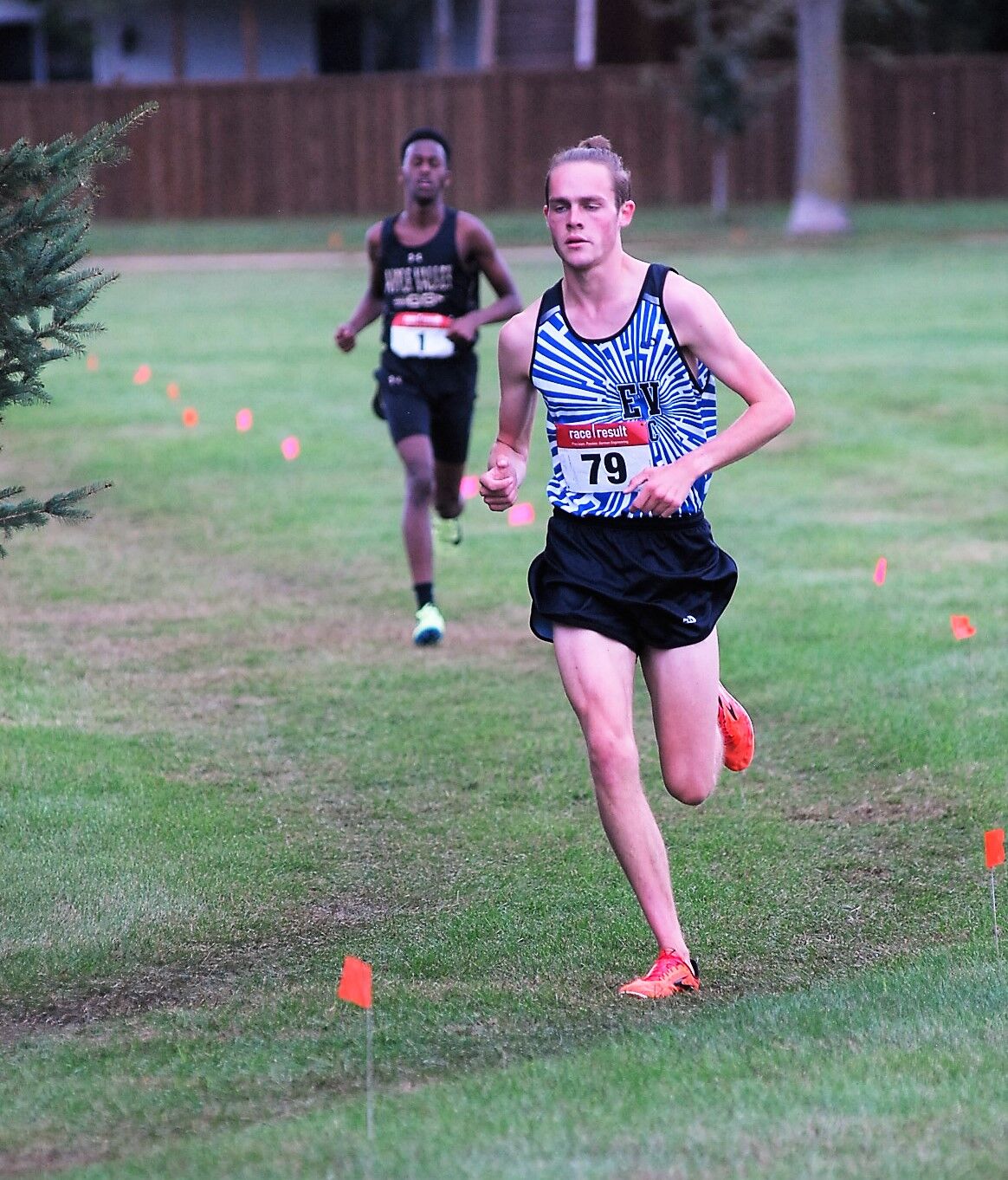 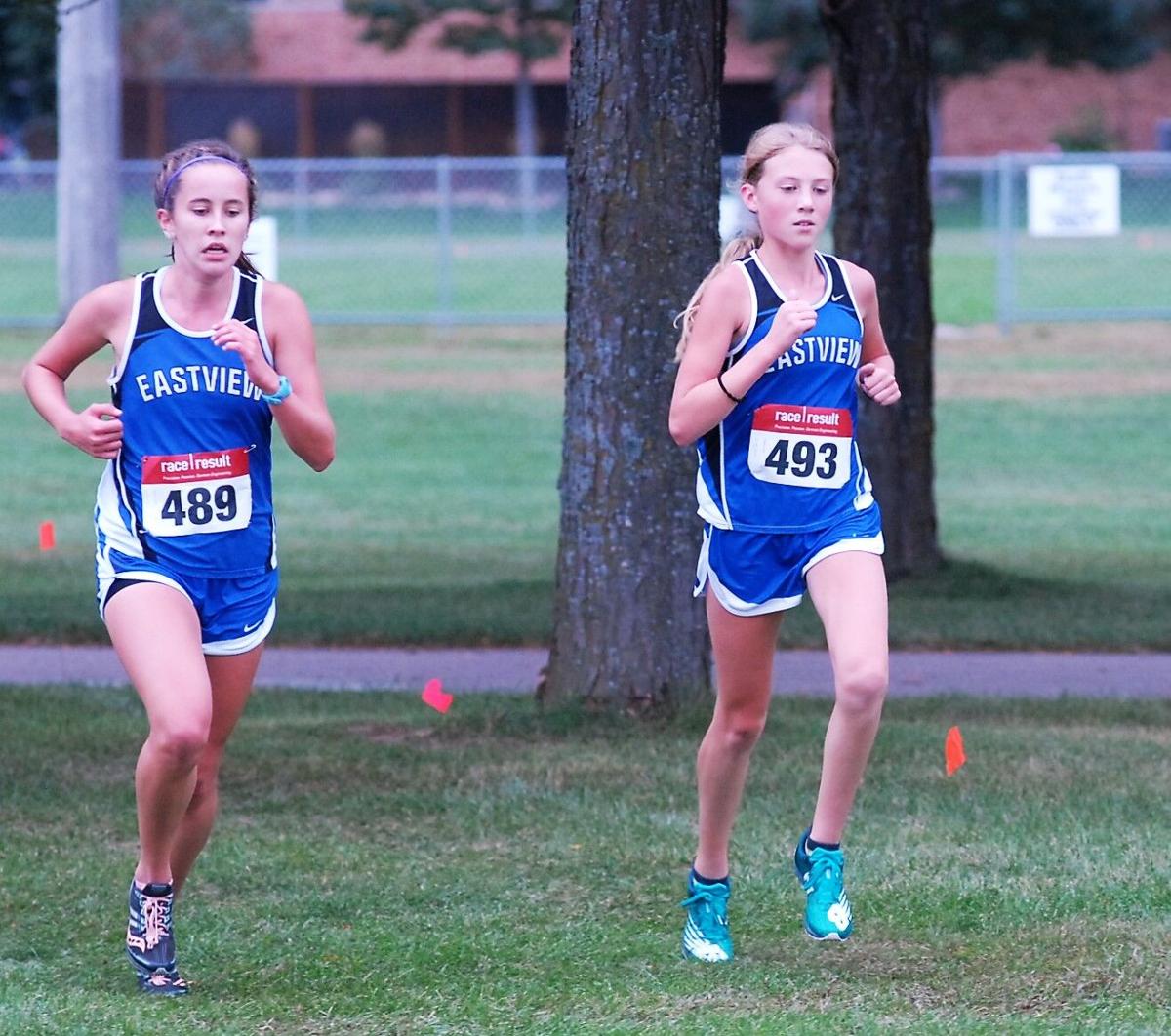 Miranda Kerndt (left) and Hadley Knight led the pack for the Eastview girls in Saturday's cross country triangular with Lakeville North and Apple Valley. Knight and Kerndt were first and second individually in the triangular and led the Lightning team to victory. 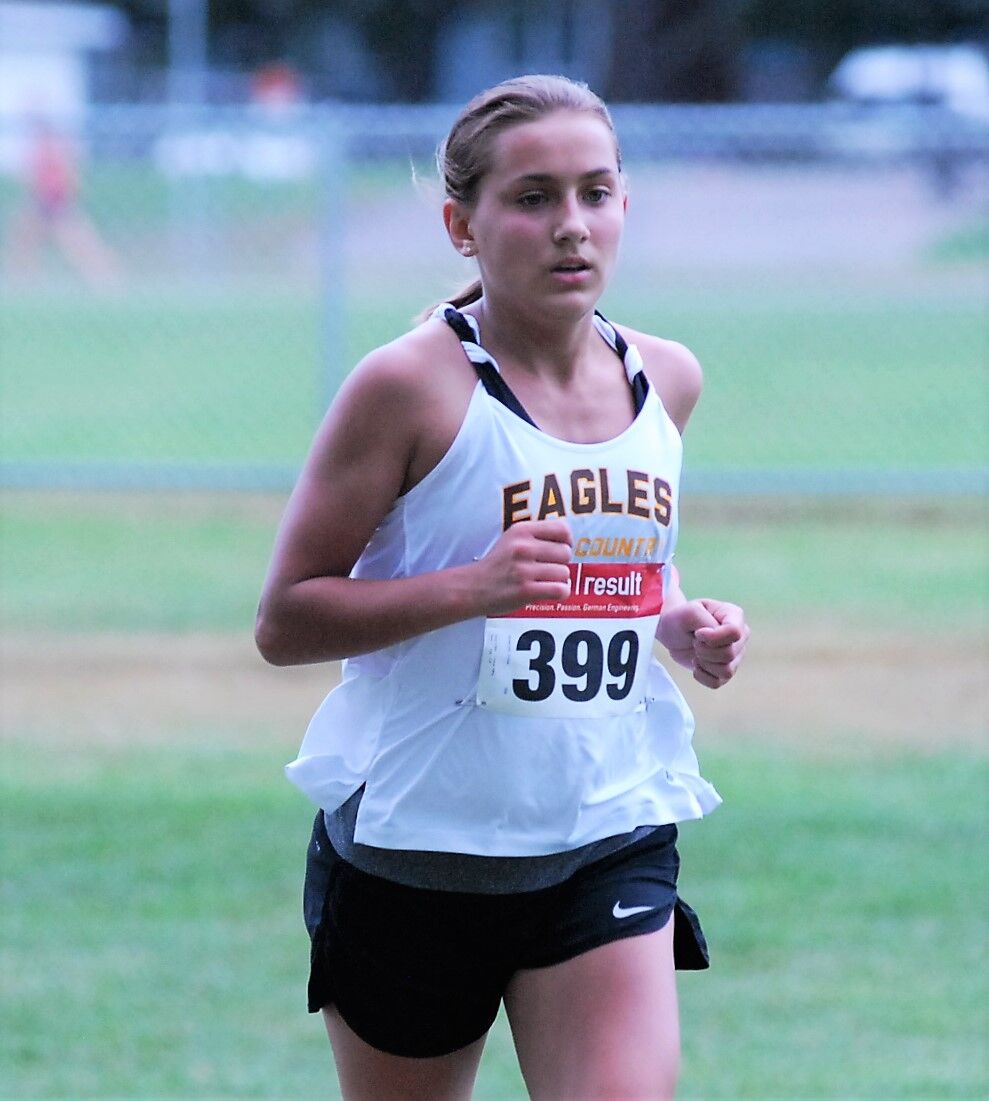 Miranda Kerndt (left) and Hadley Knight led the pack for the Eastview girls in Saturday's cross country triangular with Lakeville North and Apple Valley. Knight and Kerndt were first and second individually in the triangular and led the Lightning team to victory.

The third meet of the South Suburban Conference cross country season took runners for a couple of loops around the Shakopee West Junior High School property on Saturday – and yielded some familiar winners.

Farmington senior Anna Fenske ran the fastest overall girls time for the third consecutive meet, and her team remained unbeaten by defeating Lakeville South and Burnsville in a triangular. Eastview’s Gabriel Mahlen had the fastest boys time overall, edging Prior Lake’s Gabe Smit, who was medalist in the first two SSC races. Mahlen led the Lightning to a team victory over Lakeville North and Apple Valley.

Because of the Minnesota State High School League’s COVID-19 guidelines that limit cross country meets to duals and triangulars, Saturday’s competition was conducted as four separate meets, with runners leaving the grounds after their teams’ races were completed.

Highlights: Rosemount took the top three places and six of the top seven in the boys dual. Senior Brennan Peterson was the Irish’s top runner, finishing the 5,000-meter course in 16 minutes, 29.6 seconds. That was good for fourth overall among all SSC runners in the boys meet.

Will Harder (16:40.2) and Cole Adams (16:52,2) were second and third in the dual for the Irish. Anders Roback, Hudson Labno and Micah Beise were fifth through seventh.

Rosemount’s Makayla Bishop was first in the girls dual in 20:10.7, almost 10 seconds ahead of the second-place finisher. Joli Cammerrer, Taylor Heimerl, Daisy Islas and Abby McNeil finished third through sixth.

Both Rosemount teams remained undefeated in the South Suburban.

Eagan vs. Prior Lake

Highlights: Eagan junior Rina Aschemann was medalist in the girls dual, finishing in 19:56.1. Her time was 10th fastest among all South Suburban runners in the meet.

Prior Lake had seven of the top 11 finishers in the girls dual to finish three points ahead of the Wildcats. Eighth-grader Josie Seehafer was Eagan’s No. 2 runner and fourth in the dual. Catalina Decker and Ava Ligtenberg were sixth and seventh.

Eagan’s Michael Marshall had a strong finish in the boys dual, coming in second to Prior Lake’s Gabe Smit, the defending South Suburban champion. Marshall’s time of 16:24.9 was third fastest among all conference runners Saturday.

Sam Marshall, Arlan Hegenbarth and Andre Huston were sixth through eighth in the dual for the Wildcat boys.

Lakeville South vs. Burnsville and Farmington

Highlights: Matthew Whittaker (16:45.9), Aaron Cavanaugh (17:04.4) and Alberto Fuentes (17:05.9) finished second, third and fourth in the triangular for Lakeville South, and John Ziemkowski and Andrew Cavanaugh also grabbed spots in the top 10. Whittaker placed 10th among all boys in the SSC meet.

Farmington senior Anna Fenske ran the fastest overall time (17:58.8) for the third consecutive South Suburban meet and led the Tigers to their third consecutive victory. The Tigers again won their girls team competition convincingly, although for the first time they did not score 15 points, which is achieved by having the top five individual runners.

Mariah Fenske of Farmington took second in the triangular and second overall in 18:53.2, and Mari Scott and Mackenzy Lippold were fifth and sixth.

Lakeville South was led by eighth-grader Claire Vukovics (19:08.7) and junior Brycelyn Brewster (19:09.7), who were third and fourth in the triangular and overall.

Zoie Dundon was seventh for Burnsville in 19:29.2. The top nine individual times from all four girls meets were turned in by runners from Farmington, Lakeville South and Burnsville.

Highlights: Eastview’s Gabriel Mahlen had the top time (16:04.0) in the boys triangular and overall. Second overall was Prior Lake’s Gabe Smit (16:06.2), who was the overall medalist in the first two conference meets.

Nathaniel Getman (third in the triangular), Sam Setterlund (fourth) and Hunter Dunne (fifth) were Eastview’s next three runners. Grant Piller was seventh for the Lightning.

Top runner for Apple Valley was Abdikafi Khalif, who was 10th in the triangular. Ninth-grader Andrew Prochnow was 16th.

Emma Meyer of Apple Valley was fifth in the triangular in 21:13.9. Eleanor Pederson also made the top 10, taking eighth.

Lakeville North will be host of the next South Suburban Conference races on Friday at Michaud Park in Lakeville. First meet is a dual between North and Prior Lake at 9 a.m.