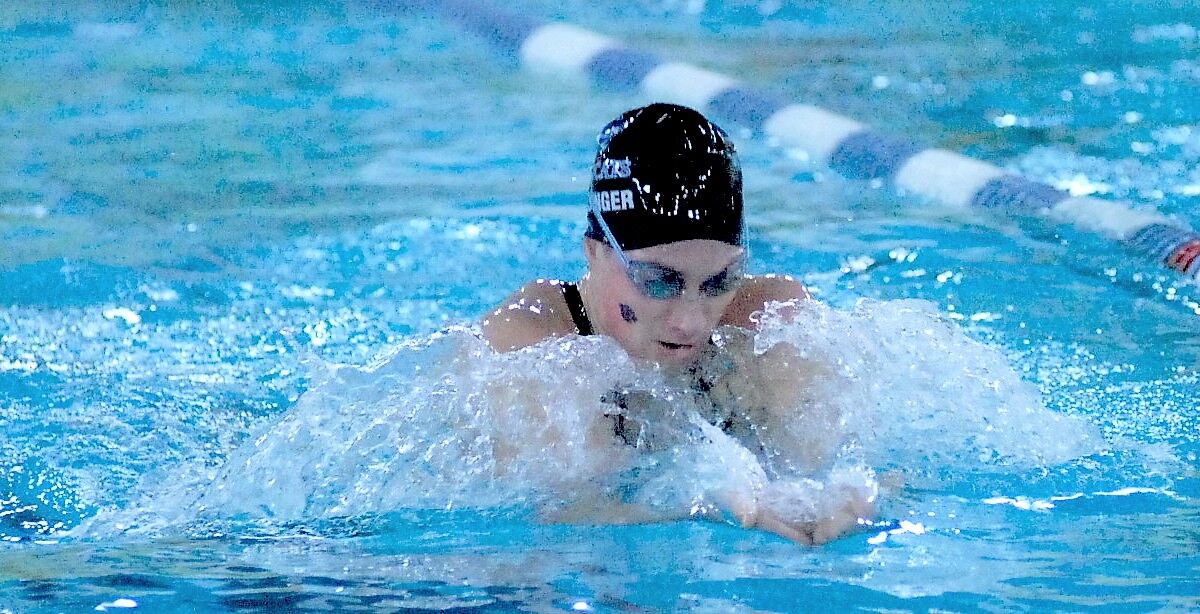 Eagan's Kiera Liesinger will swim at the state Class AA meet in two individual events and one relay. 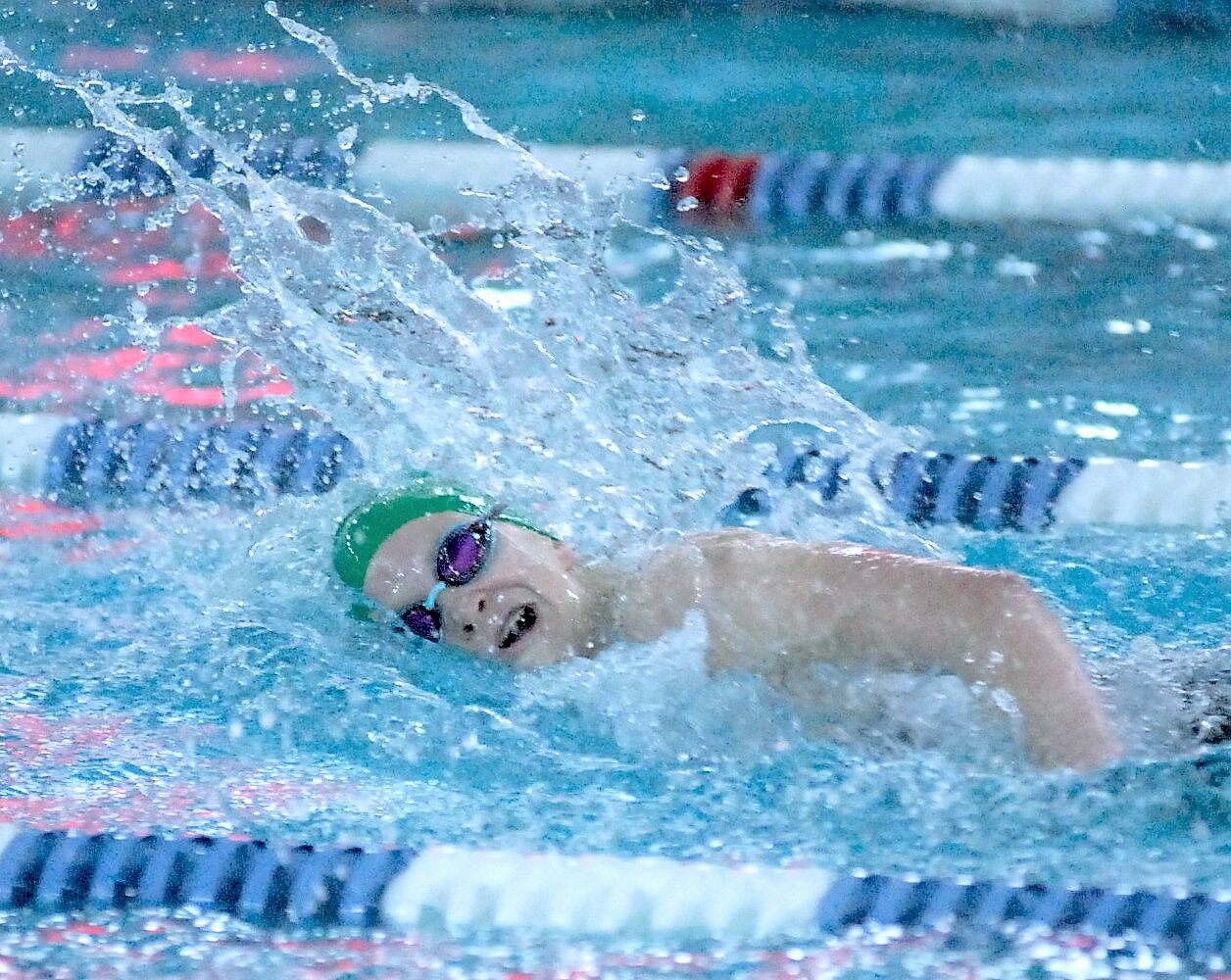 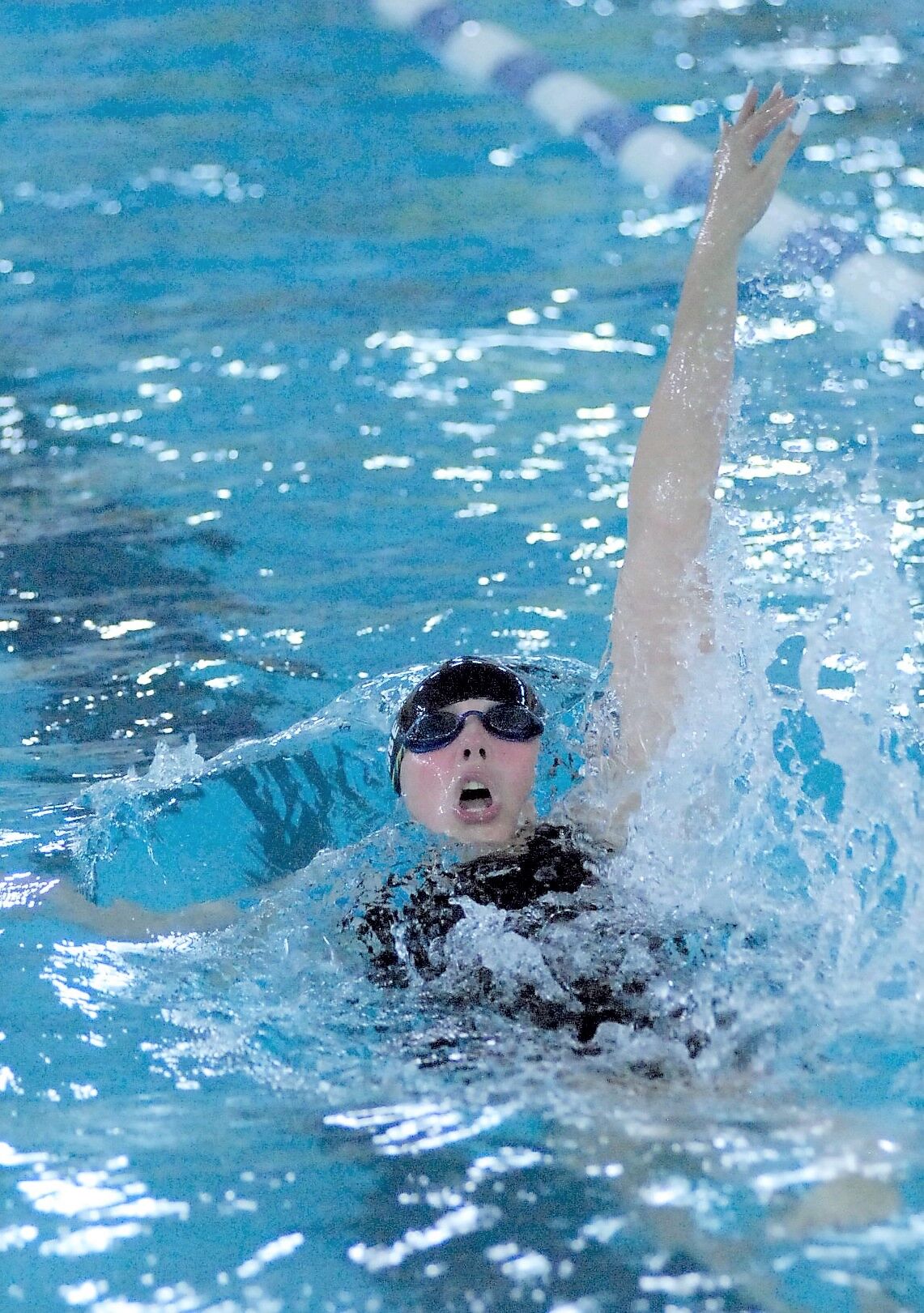 Hannah Dubbe of Eastview is the Section 3AA champion in the 100-yard backstroke, one of two events she will swim at the state meet this week. 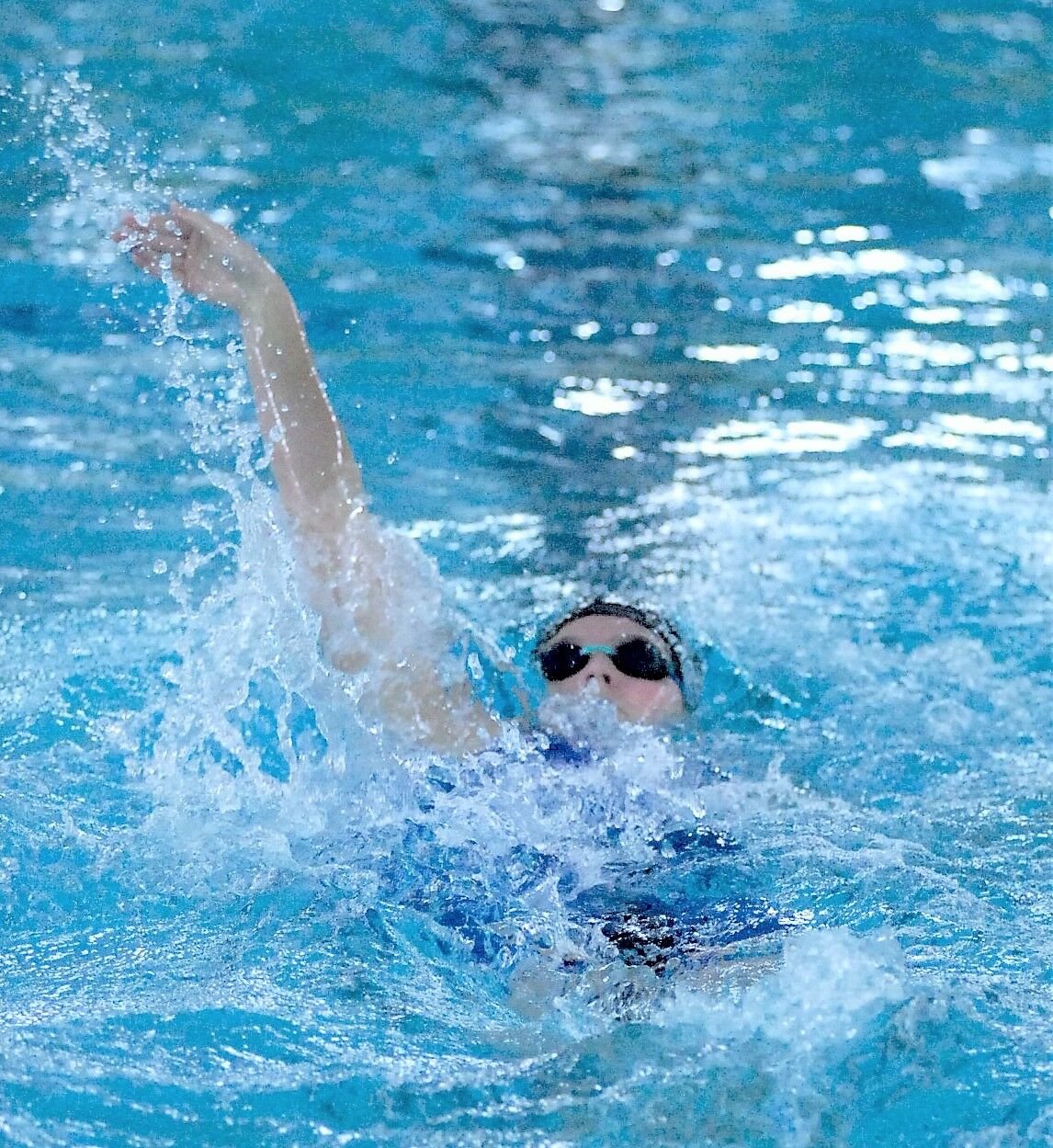 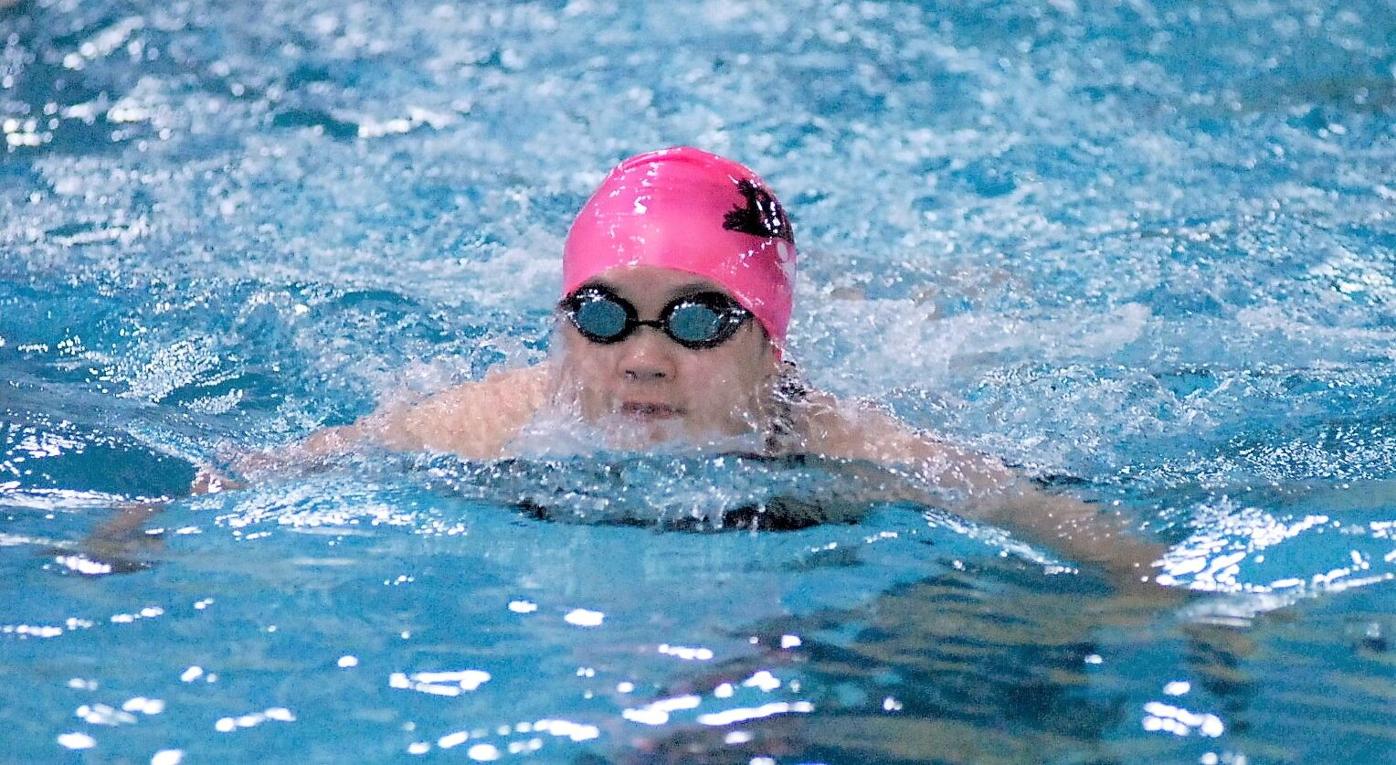 Amanda Cruz of Burnsville swims in the 200-yard medley relay at the Section 3AA meet Nov. 12.

Eagan's Kiera Liesinger will swim at the state Class AA meet in two individual events and one relay.

Hannah Dubbe of Eastview is the Section 3AA champion in the 100-yard backstroke, one of two events she will swim at the state meet this week.

Amanda Cruz of Burnsville swims in the 200-yard medley relay at the Section 3AA meet Nov. 12.

The main point of section swimming meets is for teams to advance as many of their athletes to the state meet as possible. That said, they still award team trophies at the end.

On Nov. 12, Section 3AA meet officials handed a team championship trophy to Eagan’s girls, which the Wildcats gratefully accepted. Eagan will send two relays and three individuals to state, but it was their depth that carried the Wildcats to a 76.5-point victory over runner-up Hastings at the section finals at Bluewater Aquatic Center in Apple Valley.

Eastview (fourth), Rosemount (fifth), Apple Valley (seventh) and Burnsville (eighth) also competed in the Section 3AA meet, with all sending athletes to the state meet this week at the University of Minnesota.

For the Wildcats, their Section 3AA victory was historic. It’s the fourth year in a row Eagan has won a section girls swimming championship, which has never happened at the school before.

“We always set team goals at the beginning of the season and winning the section meet has always been one of those goals,” coach Andrew Michelson said. “We have been lucky to have some amazing swimmers and divers in our program that laid the foundation for this to happen four years in a row. It’s been fun because we’ve never done this in school history.”

Going to state is a big opportunity for the Eagan athletes who advanced, considering that last year’s state meet was called off because of the pandemic.

Leading the Eagan charge was senior Kiera Liesinger, who won two individual events and swam the breaststroke leg on Eagan’s second-place 200-yard medley relay. Liesinger, who last week signed to swim at the University of Connecticut, took first in the 200 individual medley in 2 minutes, 10.46 seconds, dropping more than three seconds from her time in preliminaries.

She won her second event of the night in the 100 breaststroke, finishing in 1:05.55 to win by more than one second. Liesinger also swam a 50-yard breaststroke split of 29.64 in the medley relay, the only one below 30 seconds.

Eagan ninth-grader Claire Kindseth won a section championship in the 500 freestyle relay, finishing in 5:13.72 and dropping almost four seconds from her preliminary time.

The Eagan team of Amber Peterson, Megan Wall, Bryna Gulbrandson and Avie Hopewell took second in the 400 freestyle relay in 3:40.34 to qualify for state.

Also advancing for the Wildcats was diver Samantha Ballesteros, who scored 348.80 points to finish third in the section.

Liesinger is seeded 11th among state qualifiers in the breaststroke. That’s the highest seed of any of the Eagan athletes.

If the state coaches association rankings are an indication, Lake Conference swimmers could dominate the Class AA meet. Lake Conference teams Minnetonka, Edina and Wayzata are ranked first through third, and Eden Prairie is fifth. Two South Suburban Conference teams, Prior Lake and Shakopee, showed up in the most recent rankings in sixth and seventh.

State meet seeds sometimes don’t mean much because qualifiers are continuing their taper and are switching to a pool at the U of M that is regarded as “fast.” Michelson said he’d like to see all his swimmers and divers advance to Saturday night’s finals, which would require a top-16 finish in preliminaries.

“We want to see them back in action on Saturday night along with our 200 medley and 400 free relays,” Michelson said. “We expect them to swim fast, dive well and grow from this experience.”

Lightning sophomore Hannah Dubbe advanced to state in two events and earned a Section 3AA championship in the 100 backstroke.

She swam 58.69 in the backstroke, winning the event by about one second. Dubbe is seeded 11th among Class AA state qualifiers in the backstroke. If she matched that seed, she would qualify for the state consolation finals.

Dubbe was runner-up to Eagan’s Liesinger in the 200 individual medley in 2:11.94. She was about 1.5 seconds behind Liesinger but comfortably ahead of the third-place finisher (the top two finishers in each section swimming event automatically qualify for state).

Eastview junior Emma Vogen was second in the 500 freestyle in 5:14.41 and will swim the event at state this week.

Irish sophomore Amelia Labno swam 1:56.95 in the 200 freestyle final to win a Section 3AA championship and advance to the state meet. She won the event by about three-tenths of a second.

Also competing at state for Rosemount will be ninth-grade diver Kelly Estebo, who was fourth in the section meet. Her 11-dive score of 306.40 was enough to grab the last available state qualifying spot by about 5.5 points.

Senior freestyle sprinter Gwyn Schultz won two events in the Section 3AA finals. In the 50-yard race she finished in 24.44 seconds, more than four-tenths of a second ahead of the runner-up. She was section champion by more than half a second in the 100 freestyle, finishing in 52.85.

Schultz goes into the state meet seeded ninth in the 100 freestyle.

The Blaze’s representative in the state meet is junior Grace Affeldt, who was second in Section 3AA diving with 351.84 points for 11 attempts. The winner, Park of Cottage Grove senior Caitlyn Greenwalt, scored 382.65.

Tickets must be purchased online; no tickets will be sold at the door. Visit mshsl.org/tickets for information. A livestream of the state meet will be available at prepspotlight.tv.