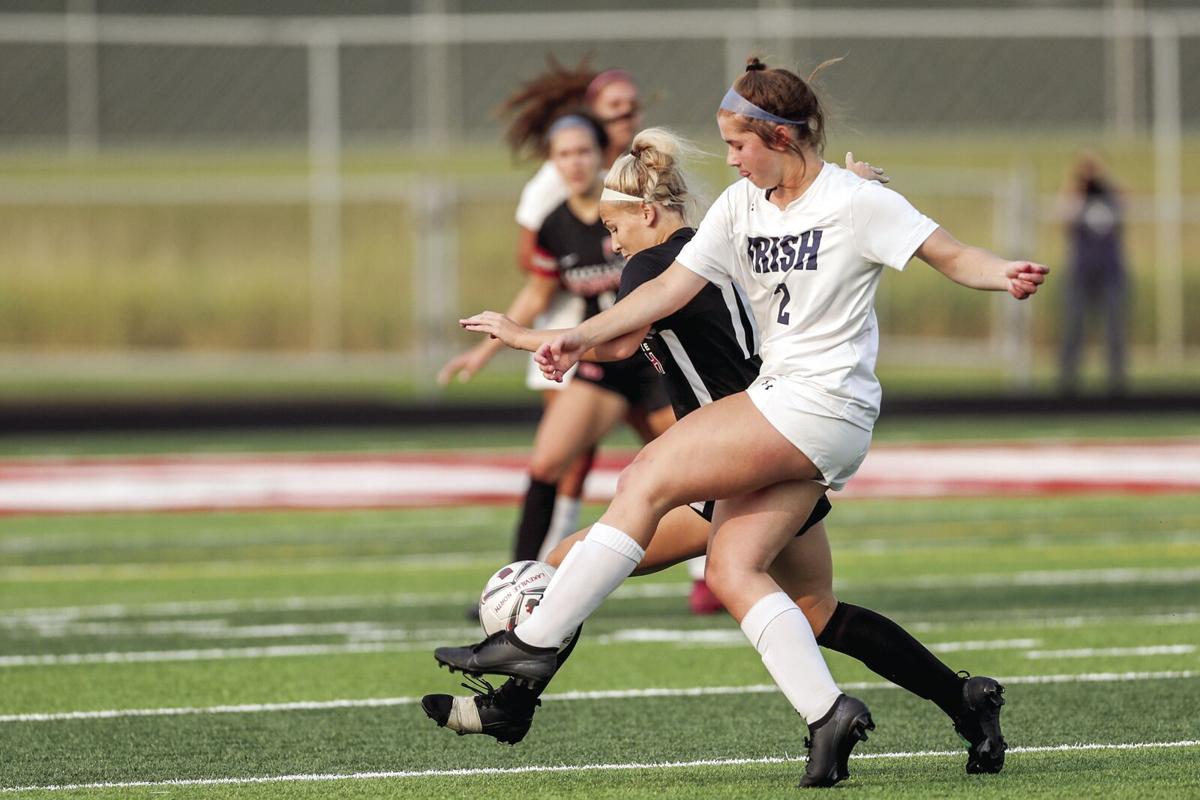 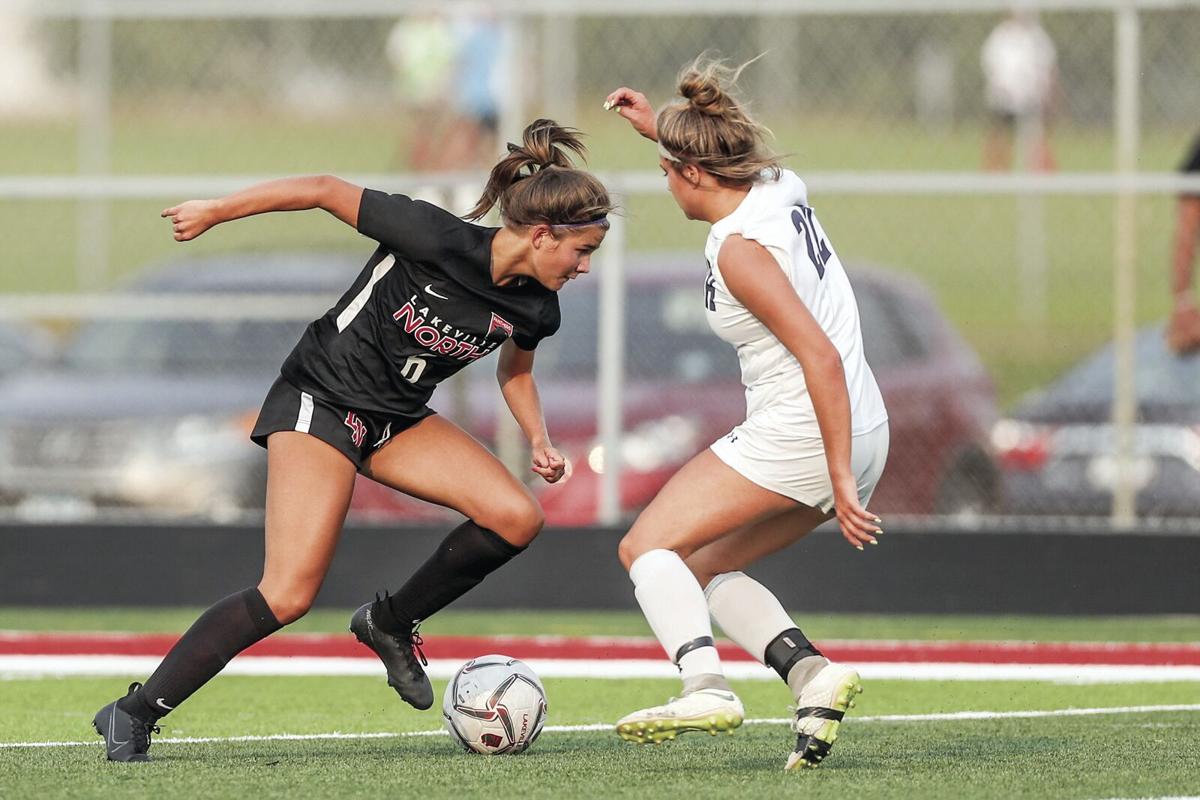 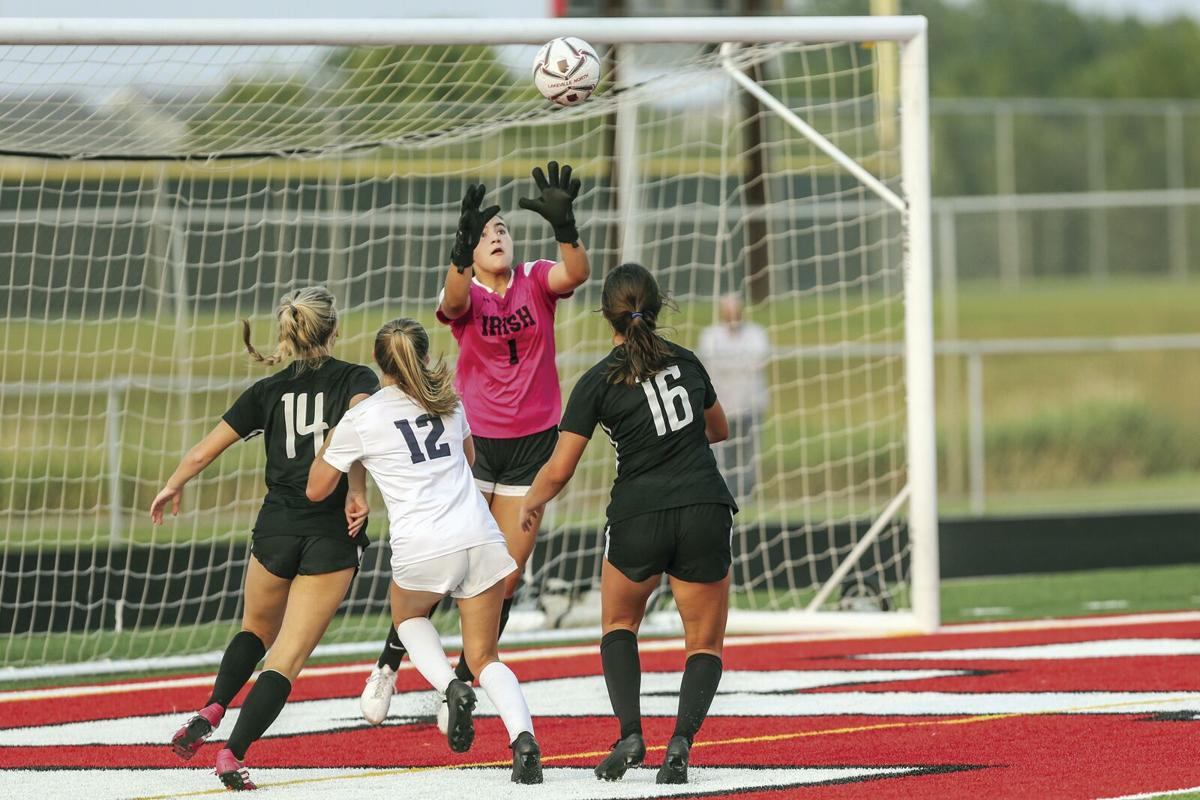 Rosemount goalie Jordan Hecht goes up to make a save in Tuesday's game against Lakeville North. Hecht earned a shutout -- as did her counterpart, Lakeville North's Annie Waters.

Rosemount goalie Jordan Hecht goes up to make a save in Tuesday's game against Lakeville North. Hecht earned a shutout -- as did her counterpart, Lakeville North's Annie Waters.

Lakeville North and Rosemount entered Tuesday’s game undefeated and unscored on – and finished it the same way.

A scoreless tie between the two South Suburban Conference girls soccer leaders might not have settled anything between the teams, but left both believing they’re on the right track for whatever postseason might take place in October. Both now are 5-0-1 overall.

“Rosemount and Lakeville North is a rivalry in the making now that both of us are in the same section,” Lakeville North coach Brian Lehman said. In addition to playing at least once during the regular season in South Suburban play, Lakeville North’s move to Section 3AA last year also resulted in a playoff game between the teams, won by Rosemount 2-1 on penalty kicks to send the Irish to state.

If they meet again in the playoffs, expect more closely contested soccer. The teams haven’t played a game that was decided by more than one goal since 2015.

Both teams had some scoring opportunities, especially when working downwind, but for the most part disciplined defense kept the offenses in check.

It was mentioned to Rosemount coach Gretchen Stramel that the Irish appeared to do almost everything required to win. “Except score?” she asked. “It’s frustrating. A tie isn’t what you look for, and with the season the way it is, there’s no overtime (one of the COVID-19 sports modifications is no overtime for regular-season soccer games). We did a lot of things well, but there are a lot of things we need to work on.

“Lakeville always plays a great defensive game. They tend to have a lot of numbers back and it makes it hard to get through them. Their goalie (Annie Waters) made some very good saves.”

“Kenzie also is a great track athlete and uses her speed very well,” Lehman said. “If you get too aggressive with her at the half and don’t have defenders behind the ball, she’ll scoot by you. It seems like every time she’s had a big game it’s because the defense was impatient. (North defenders) Marlee Williams and Sara Kugler did an excellent job on the back line, and Annie controlled the box.”

North also kept the rest of Rosemount’s players from doing damage. Previously, Stramel said, the Irish have been able to take advantage of opponents’ preoccupation with containing Jacobson.

Irish goalie Jordan Hecht also earned a shutout and was tested several times, particularly in the second half.

Lakeville North has made some offensive changes, moving McKenna Lehman to center midfield, a playmaking position where she can get the ball to scores such as Anna Tobias and Louisa Shromoff. Brian Lehman said he expects that alignment to yield some more goals in the second half of the regular season. Lakeville North is home against Eagan at 7:15 p.m. Thursday.

Rosemount is at Farmington at 7:15 p.m. Thursday. Stramel is looking for the Irish to do what they’ve been doing, just a little more quickly.

“Our pace of play needs to speed up,” Stramel said. “As the season progresses they’ll get used to playing with each other a little bit more and get more conditioned. They came into the season not having played a game in six or seven months because their club seasons were canceled. As they build that conditioning and their pace of place increases, we hope to see more out of them when it comes to quickness. That would have helped us (Tuesday), being a little quicker with our shot release.”

• Lakeville North moved to 5-0-1 in boys soccer after defeating Rosemount 2-0 in the second half of a girls-boys doubleheader at Lakeville North High School. Ethan Sedlacek scored both goals for North, with Jonathan Bayer assisting on both.

Although North and Eastview (4-0-2) remain undefeated, Shakopee leads the South Suburban Conference boys race. The Sabers are 4-0 in games that count in the conference standings, while North is 3-0-1 and Eastview 2-0-2. Eastview and Lakeville South played to a scoreless tie on Tuesday.

• Eagan continued its move up the SSC boys standings with a 4-0 victory over Farmington on Tuesday. The Wildcats have won their last five games and are 5-1 overall.

Ryan Lenertz, Derrick Sieh, Vince Caporelli and Emilio Villasenor Lopez scored on Tuesday for the Wildcats, who have a big game at Lakeville North at 5 p.m. Thursday.

• Apple Valley has a 10-0 loss to Shakopee on its boys soccer record, but the Eagles are 3-0-2 in their other five games. That includes a 6-0 victory over Burnsville on Tuesday and 1-1 draw with Eastview on Sept. 10.