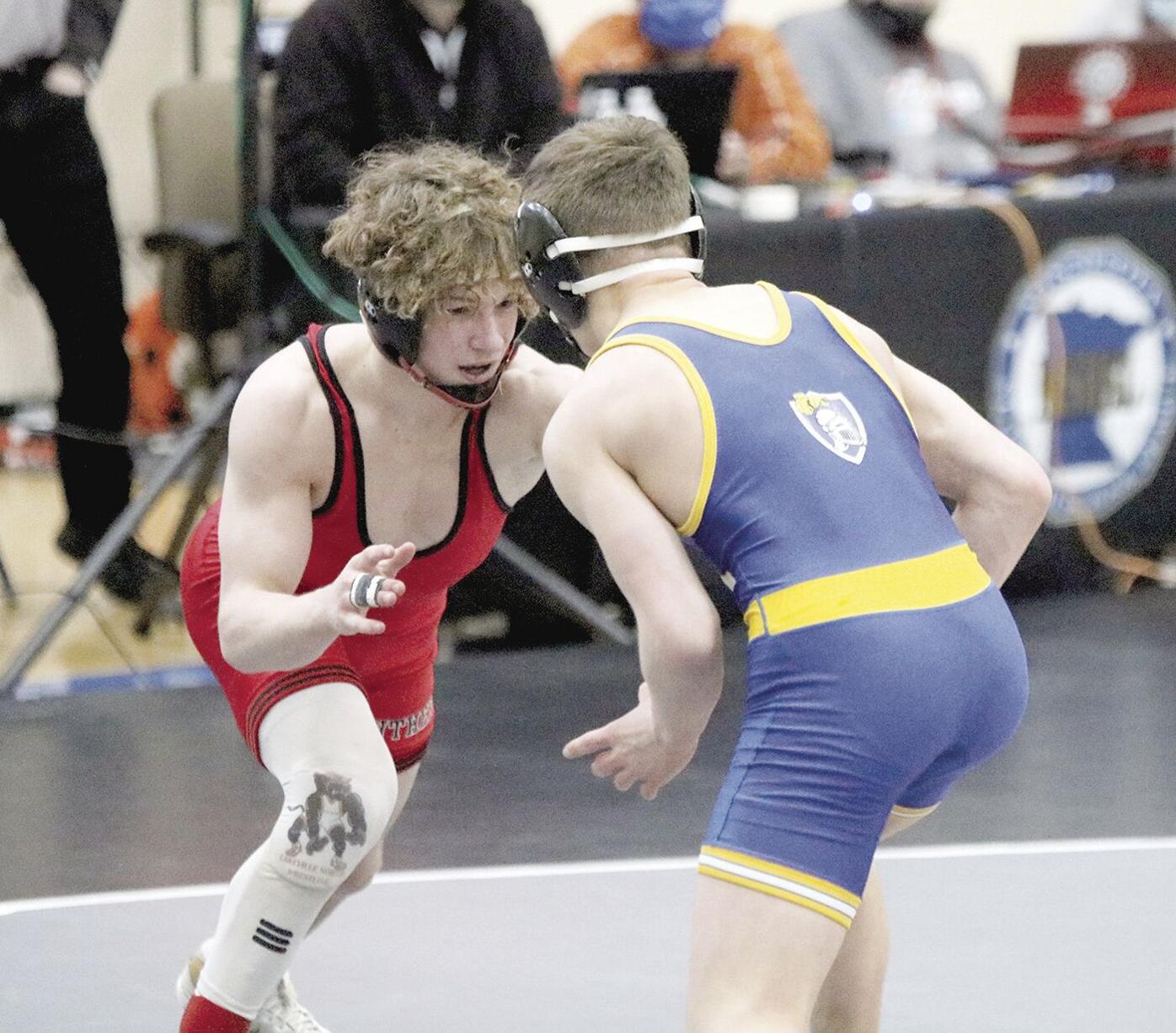 Jore Volk (left) of Lakeville North defeated Landon Robideau of St. Michael-Albertville in a state championship match for the second consecutive year. Volk won the Class 3A 120-pound title this season after taking first at 106 in 2020. 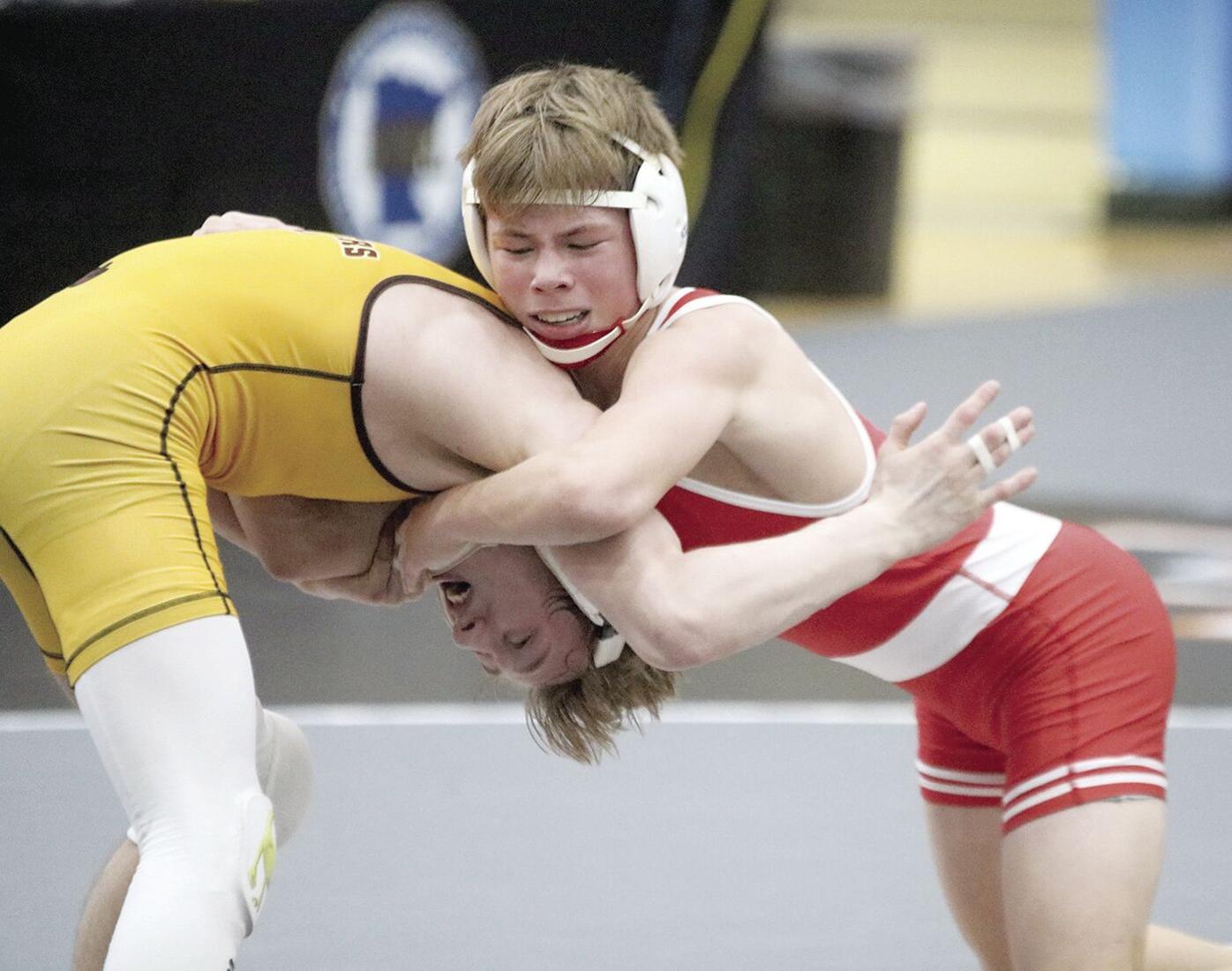 Lakeville North's Zach Hanson (right) lost 3-2 to Derrick Cardinal of Forest Lake in the state Class 3A 132-pound finals. The match went to an ultimate tiebreak before Cardinal scored the winning point. Hanson, a state runner-up for the second consecutive year, was 32-1 this season. 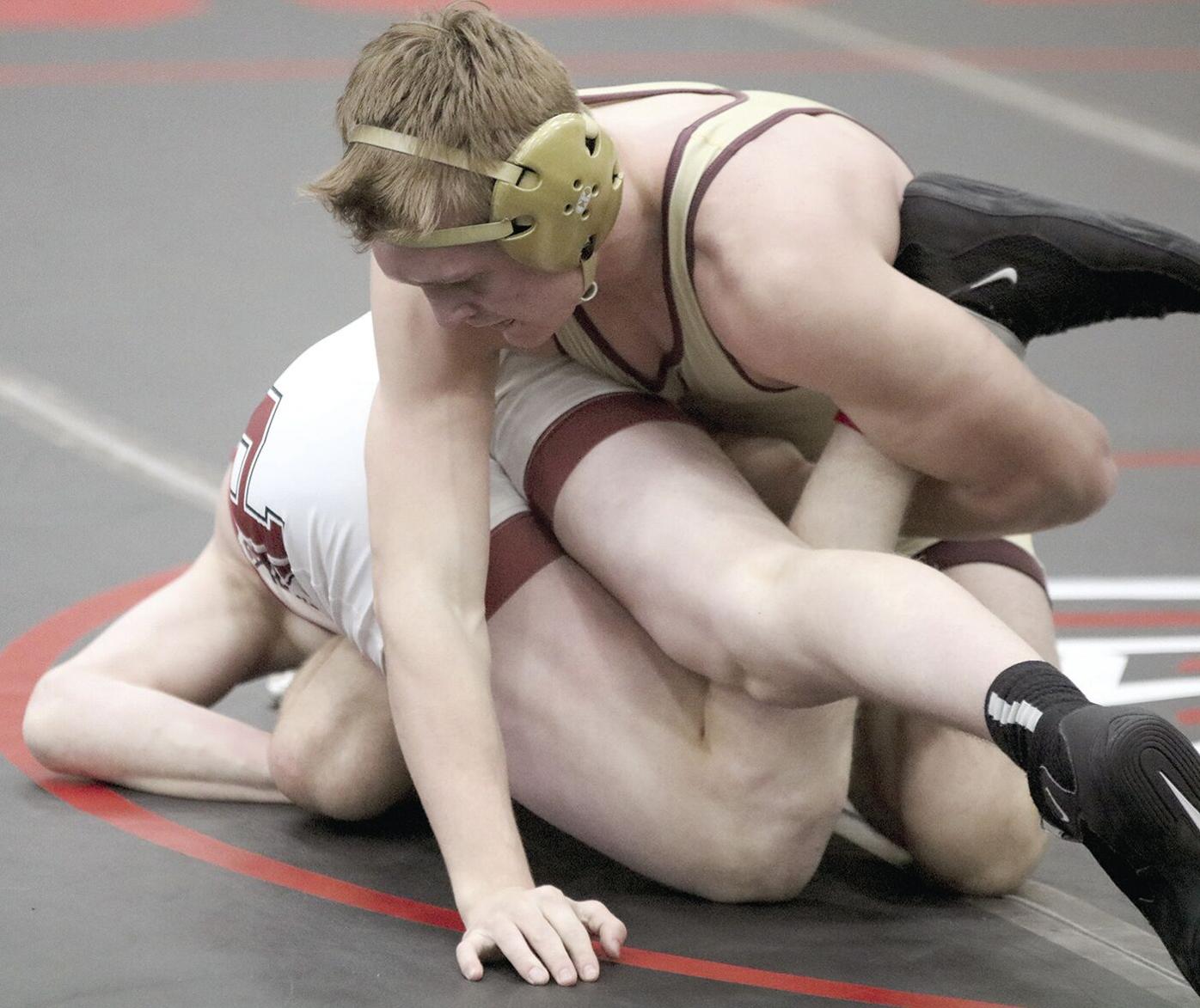 Jore Volk (left) of Lakeville North defeated Landon Robideau of St. Michael-Albertville in a state championship match for the second consecutive year. Volk won the Class 3A 120-pound title this season after taking first at 106 in 2020.

Lakeville North's Zach Hanson (right) lost 3-2 to Derrick Cardinal of Forest Lake in the state Class 3A 132-pound finals. The match went to an ultimate tiebreak before Cardinal scored the winning point. Hanson, a state runner-up for the second consecutive year, was 32-1 this season.

His path to the Class 3A 120-pound championship last week confirmed Volk, a junior, is one of the elite high school wrestlers in Minnesota. In addition to state championships the last two years, he was a state runner-up in 2019. He’s 119-6 in high school competition over the last three seasons.

After winning state championships at 106 in 2020 and 120 this season, the only question for 2022 might be, what weight class will Volk have in his sights?

“Jore’s good enough to win a state championship at any weight class he wants,” Lakeville North coach Dan Recchio said. “This year he had to cut down to make 120, so he probably won’t see that weight again. I don’t know what weight he will move up to next year, but I’d like to see him find a comfortable weight where he doesn’t have to cut as much.”

The state tournament format was changed to meet Minnesota Department of Health COVID-19 restrictions. In other years, the final 16 in each weight class gathered at the state meet site. This year, “super regionals” were introduced across the state, with eight competitors per weight class advancing to the finals.

Class 3A qualifiers met March 25 at St. Michael-Albertville High School. Instead of the individual meet being contested over two days, Volk won three matches in one day to earn his second state title.

He started by defeating Sullivan Anez of Willmar by technical fall in the quarterfinals and Zachary Silvis of Park of Cottage Grove 18-5 in the semifinals. The championship match was against a familiar opponent – St. Michael-Albertville eighth-grader Landon Robideau, who Volk defeated 3-2 in the finals at 106 last year. Volk also defeated Robideau by decision in the 2021 regular season.

If Robideau had an advantage by wrestling the state final in his home gymnasium, it didn’t appear to bother Volk. The first period of the championship match was scoreless. Robideau started the second period on the bottom and quickly escaped to take a 1-0 lead. Volk, however, scored a takedown 40 seconds later and added an escape in the third for a 3-1 victory.

“Landon wrestled a smart match and so did Jore,” Recchio said. “But Jore was really sharp that day. The score was close, but I thought Jore was always in control. I never had a feeling that he could lose the match.”

Volk’s only loss this season was to state 132-pound champion Derrick Cardinal of Forest Lake. Volk asked for the match and moved up three weights to take it.

Cardinal, a senior, will graduate as a three-time state champion after defeating Lakeville North sophomore Zach Hanson 3-2 in the finals at 132. Hanson (32-1) was a state runner-up for the second consecutive year; he was second at 113 pounds in 2020.

Neither wrestler scored a takedown in the 132-pound final that went to an ultimate tiebreaker. Cardinal got an escape in the second period, and Hanson countered with an escape of his own in the third. The matter wasn’t settled through three overtime periods, with each wrestler earning another escape point.

Hanson, 111-11 over the last three seasons, reached the final by defeating Isaiah Mlsna of St. Michael-Albertville 3-2 and Luke Studer of Blaine 8-7.

Recchio said he believes it’s a matter of time before Hanson is a state champion.

“Derrick Cardinal is a fantastic wrestler,” Recchio said. “And Zach is exceptional in terms of his understanding of the sport. It’s like he’s a 40-year-old coach in a 16-year-old’s body. He improved a great deal over last year. He will be a better wrestler next season, and eventually he’s going to get that state championship.”

Lakeville South senior Brice Bischof made it to the Class 3A final eight at 152 pounds and placed fourth.

Bischof, 26-4, defeated Hastings’ Aiden Erickson 7-0 in the quarterfinals to advance to the semis against undefeated Wayzata senior Cael Swensen. Swensen won by fall in 4 minutes, 48 seconds on his way to the championship.

Joey Novak of New Prague defeated Bischof by fall in 3:40 in the third-place match. It was the second match between the two in less than a week. Novak decisioned Bischof 9-2 in the finals of a super regional in Farmington on March 20.