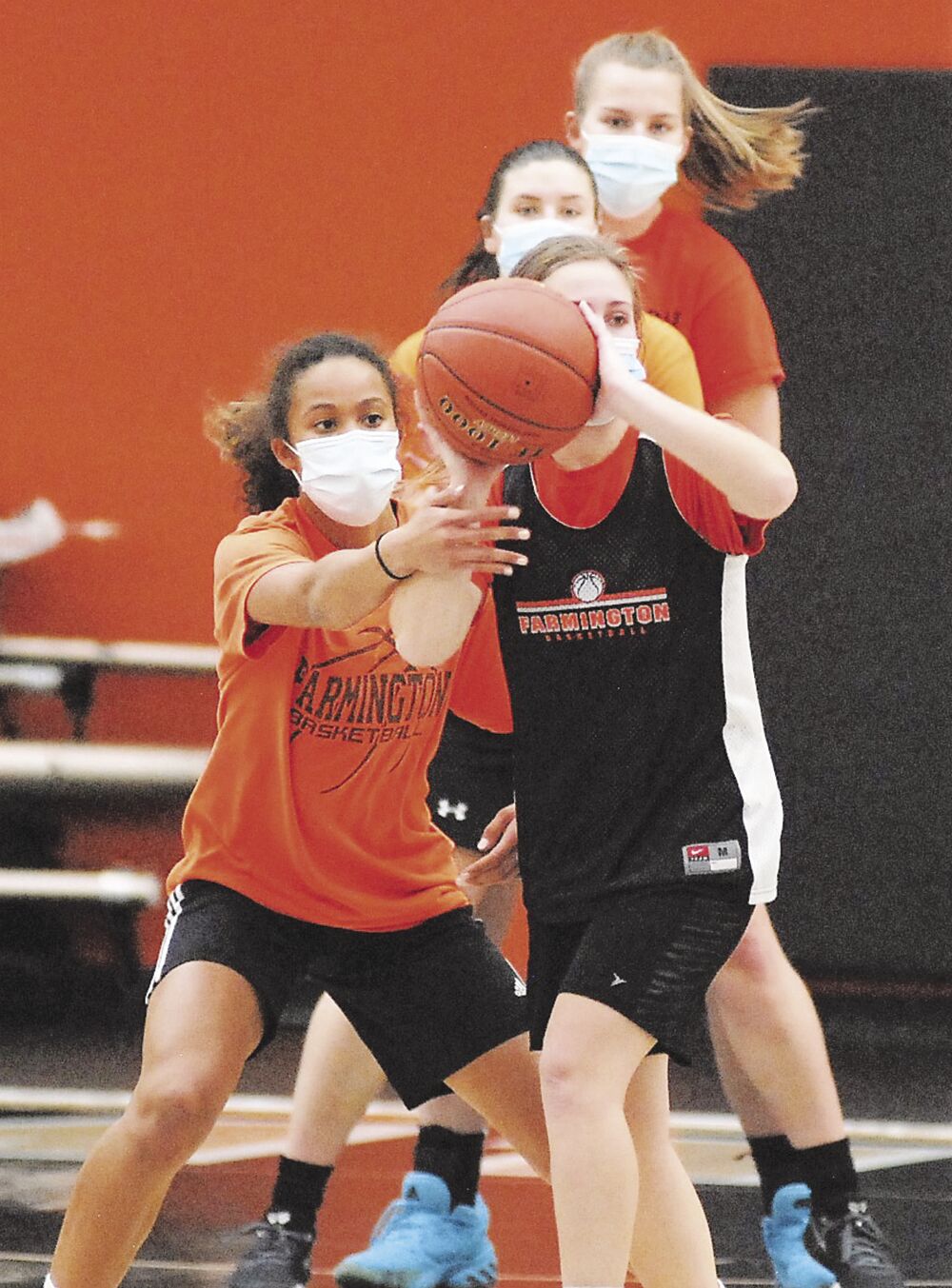 One of the things Farmington girls basketball players worked on in practice Tuesday was playing with face coverings. Masks are required during practice and will be mandatory when games begin next week. 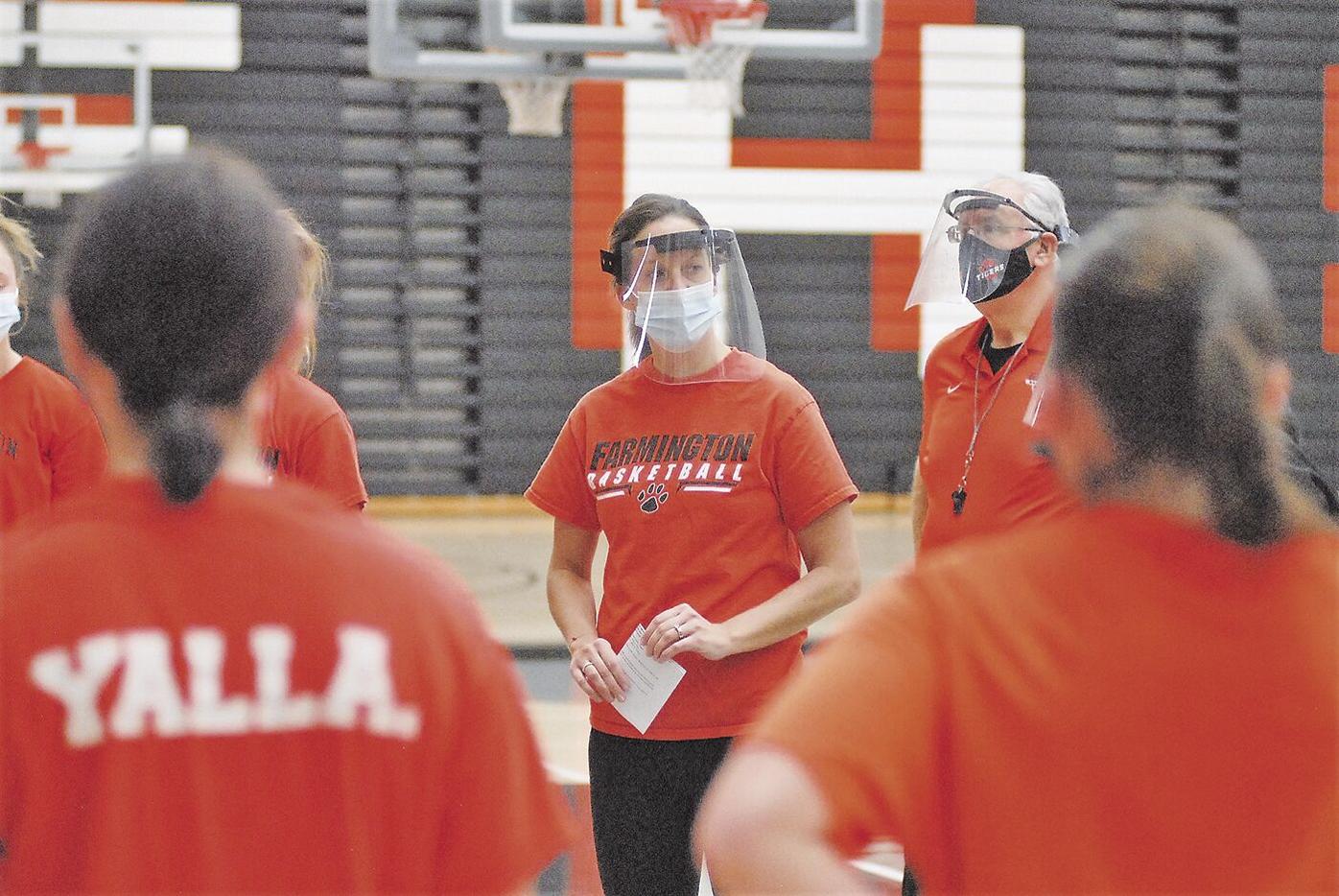 One of the things Farmington girls basketball players worked on in practice Tuesday was playing with face coverings. Masks are required during practice and will be mandatory when games begin next week.

High school winter sports athletes had not been with their teammates for practice since summer, if not longer, and many of them will have competitions as early as next week.

Then, Monday’s restart of the Minnesota winter sports season brought an additional complication – the athletes had to adjust to wearing masks during practice. When games and scrimmages are allowed beginning Jan. 14, the mask requirement will stay.

Many of the Farmington High School girls basketball players had never attempted to train while wearing a mask before showing up for Monday’s opening day of practice. It was an eye-opener, but two Tigers seniors said they will adapt.

“(Monday) was pretty hard. It was our first day with the masks and everything,” guard Peyton Blandin said. “Our coach pushed us pretty hard, too. I thought we adjusted much better (Tuesday) – at least I had an easier time breathing.”

The first day of practice in any season tends to be challenging as players build their conditioning, but this year “I would say it’s rather more difficult compared to last year,” Farmington guard Paige Kindseth said. “Each day it’s going to get better and better and you’ll get more used to it. (Monday) was pretty hard because it was the first day back, but (Tuesday) I could tell it was easier.”

High school athletes in several other states already are required to wear masks while competing, but Minnesota had made it optional for fall sports. In the winter, it will be mandatory for most. Wrestlers, gymnasts, swimmers and cheerleaders will receive exemptions because of the possibility of the masks getting wet, or being choking or vision hazards.

Everybody else at an event will have to mask up, too. On Wednesday, when Gov. Tim Walz announced an updated executive order that will permit restaurants to resume limited in-person dining, he also was expected to allow fans to attend youth sports events. Indoor attendance is likely to be capped at 25 percent of capacity or 150 spectators, whichever is less. Attendance at outdoor events was to be limited to 250.

While the mask mandate for athletes was expected to encounter some resistance, many appeared to be taking an it-is-what-it-is attitude. It was viewed as better than the alternative, which is not playing or practicing.

Burnsville girls hockey coach Chris Lepper said he expects the masks to be a factor in games. They could cause athletes to tire more quickly, which makes conditioning an even bigger priority.

Lepper asked his players to try several types of masks during the first week of practice to find what’s comfortable. They also will need to have several masks available during games because masks are supposed to be discarded when they get wet from perspiration or ice shavings.

At Farmington, girls basketball coach Liz Carpentier and her assistants wore combination masks during practice – cloth, plus a clear plastic face shield. The players will wear cloth masks only.

Carpentier, a former president of the state girls basketball coaches association, said Tuesday she had not heard how mask compliance during games would be enforced. At Tuesday’s practice, Tigers players found it wasn’t always easy to keep the masks over their noses, and at least one player’s mask fell to the floor during a drill.

The opportunity for her players to get back on the floor overrides any inconveniences caused by masks, Carpentier said.

“I haven’t heard them complain about it one time,” she said. “The kids have been awesome. They have come to play basketball and enjoy it, and it has not been a distraction.”

Masking up during play is the new normal