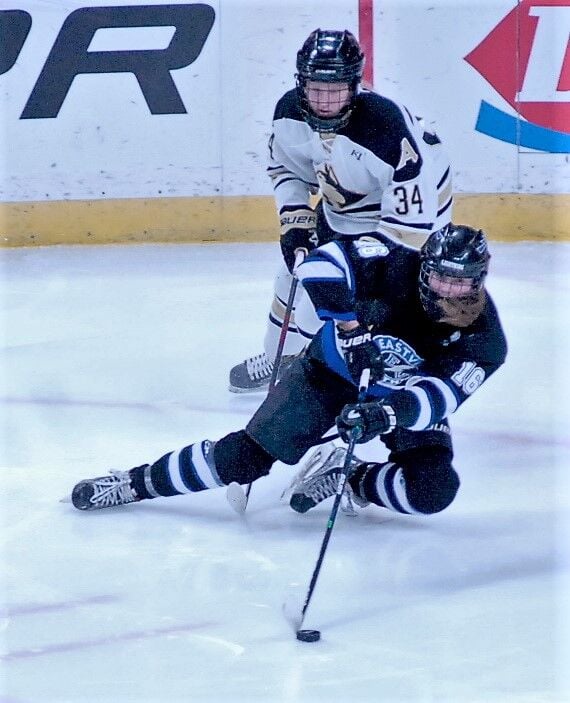 Eastview forward Mikayla Kelley tries to take a backhand shot while falling to the ice during the Class AA girls hockey semifinals against Andover on April 1 at Xcel Energy Center. 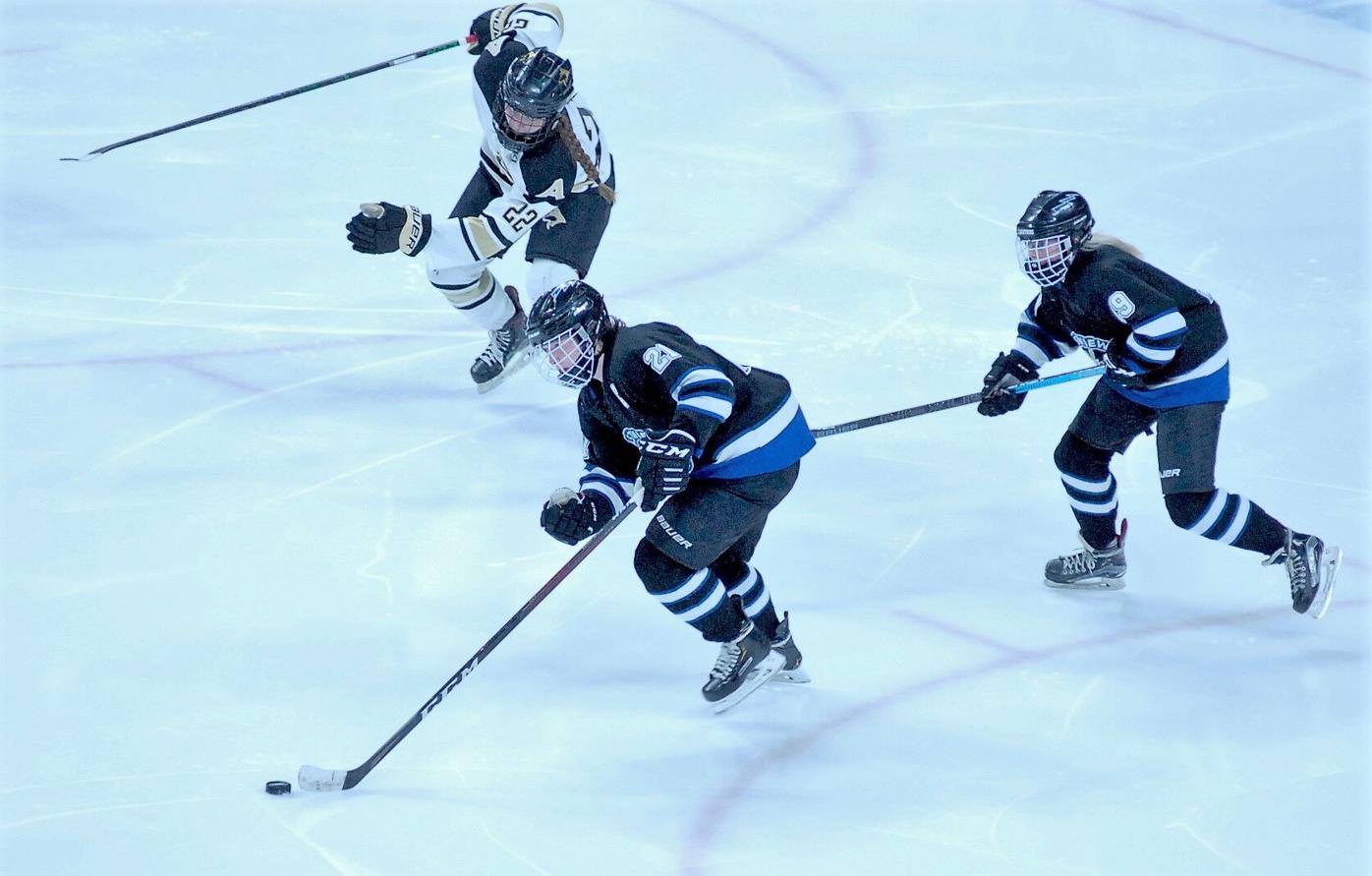 Nora Stepan (21) and Lainey Dwinell start the rush for Eastview against Andover in the Class AA girls hockey semifinals.

Eastview forward Mikayla Kelley tries to take a backhand shot while falling to the ice during the Class AA girls hockey semifinals against Andover on April 1 at Xcel Energy Center.

Nora Stepan (21) and Lainey Dwinell start the rush for Eastview against Andover in the Class AA girls hockey semifinals.

Andover’s offense might not be impossible to stop but it’s the next closest thing, as Eastview found out last week at the state girls hockey tournament.

Backstopped by goalie Angie Lombardi, who made 35 saves in the first two periods, the Lightning stayed as close as they could for as long as they could. In the third period, however, the dam broke and Andover scored five times in what became a 7-0 victory.

The April 1 loss at Xcel Energy Center ended Eastview’s season at 16-5-2. It was the first time in four state tournament appearances the Lightning reached the semifinals.

Andover (22-1), the defending state champion, yielded the title to Edina in a 2-1 loss Saturday afternoon. It was the only time all season the Huskies, who feature seven future Division I college players, had been held to fewer than four goals.

The two South Suburban Conference teams that qualified for state, Farmington and Eastview, got an up-close look at Andover’s successful formula. Farmington was held to six shots on goal in a 4-0 loss to Andover in the quarterfinals.

Eastview kept the powerful Andover attack at bay for about nine minutes before the Huskies got on the board. It remained a one-goal game before Andover added its second goal at 14 minutes, 48 seconds of the second period.

At that point the Lightning needed to play more wide-open to try to get back in the game, and that plays into Andover’s hands. The Huskies scored five more times in a 12-minute span to put it away.

Lombardi made 41 saves on 47 shots on goal before coming out for ninth-grader Lila Hanson, who played the final 90 seconds. Hanson allowed the final Andover goal.

Three players accounted for all but one of the Lightning’s 11 shots on goal. Junior defender Nora Stepan, who scored in Eastview’s 1-0 state quarterfinal victory over Stillwater, had four shots against Andover. Senior forward Brynn Swenson and junior forward Avery Chesek had three each.

It was the second opportunity to play at state for senior forward Mikayla Kelley, who was on the Lightning roster in 2017, when Eastview played in the Class AA tourney for the third consecutive year. Kelley was third on the team in scoring this season with 35 points (15 goals, 20 assists) and will play at Division I Franklin Pierce University next year.

Next year’s team will return two of this year’s top three Eastview scorers, Chesek (36 points) and Stepan (29). Also returning will be both goalies, Lombardi and Hanson.

Eastview finished third in the South Suburban Conference, one point behind second-place Lakeville South. The Minnesota State High School League will announce section alignments later this spring but barring a major shakeup, Eastview likely would return to Section 3AA to defend its championship. Most of the other section contenders also are expected to be South Suburban schools such as Burnsville, Apple Valley, Rosemount, Eagan and Lakeville North.