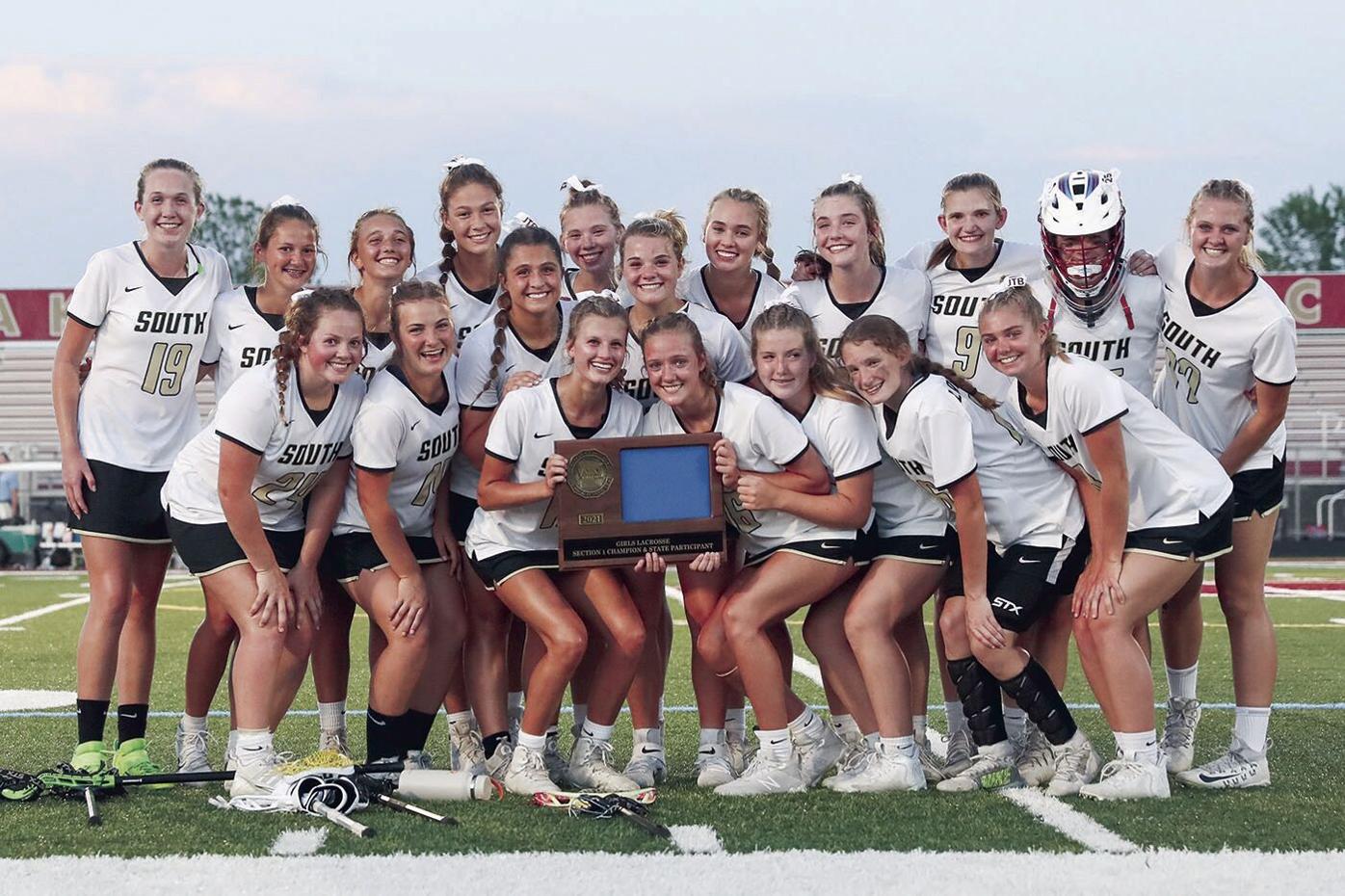 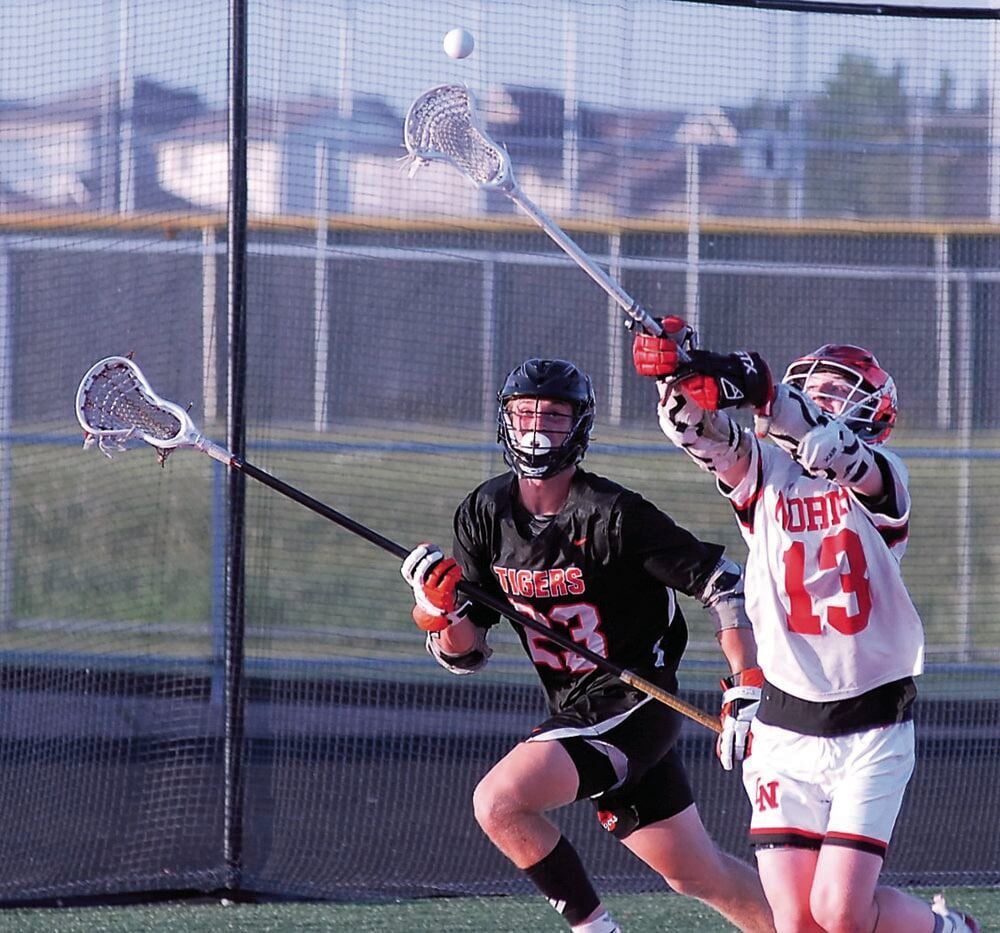 Tyler Winship (13) of Lakeville North reaches to recover the ball during the Section 1 boys lacrosse championship game against Farmington on Tuesday night. North won 7-5 to advance to next week's state tournament.

Tyler Winship (13) of Lakeville North reaches to recover the ball during the Section 1 boys lacrosse championship game against Farmington on Tuesday night. North won 7-5 to advance to next week's state tournament.

Just as it did two years ago, Lakeville will have two teams in the state high school lacrosse tournaments.

A 7-5 victory over Farmington in Tuesday’s Section 1 final gave Lakeville North its seventh consecutive trip to the boys tourney. The Panthers went to state every year from 2014 through 2019 before the pandemic shut down the 2020 season.

On the girls side, No. 3-ranked Lakeville South held off defending Section 1 champion Lakeville North 14-12 to earn their first state berth since 2016.

Lakeville North had new head coaches this season, but both knew the South Suburban Conference landscape. What’s more, they didn’t want to mess with what had made the Panthers successful.

Co-head coaches Tim Roche and Matt Stonestrom both have been head coach of the Eastview High School boys team. Roche coached Eastview teams to one state championship and two runner-up finishes. They had made their way to the Lakeville North program as assistant coaches when the head coaching position opened.

“It was just a continuation for the kids. We didn’t want to give them another new coach, somebody they didn’t know,” Roche said. “I had been here two years ago as an assistant, so I was just a familiar face. Stonestrom was here last fall. We just wanted to keep that going for the kids.”

The Panthers had just two players who saw extensive playing time on the 2019 team. Fortunately, senior goalie A.J. Preachuk was one of them. Once the defenders in front of Preachuk adjusted to the varsity game, the Panthers became a difficult team to score against.

“Thankfully we had a guy between the pipes who saved us from a lot of mistakes as we grew, and now I think everybody’s on the same page and we’re able to throw a lot of different looks at opponents,” Stonestrom said.

Tuesday, the Panthers held a 5-2 lead at halftime. In the third quarter they went to a zone defense that allowed Farmington (8-8) a lot of possession time but few quality shots. Farmington scored just one goal in the quarter.

Still, North was sweating it out in the fourth quarter as Farmington’s Luke Coolidge scored with 3 minutes, 11 seconds remaining to pull the Tigers within 6-5. North then took a penalty and was shorthanded for 30 seconds, but Preachuk saved the one Farmington shot during the man disadvantage.

A goal by Austin Winship with 1:18 to play sealed the eighth consecutive victory for Lakeville North (11-5).

“These games are always difficult when your opponent has such a strong faceoff player,” Stonestrom said. “Knowing when you go into a game that you’re going to be short possessions sort of changes your outlook. When the other team can get possessions and has a star player like (Wisdorf), you’ve always got to be a little worried.”

Lakeville North started 3-5, but all five of the losses were to teams that finished the regular season with winning records. Four of them were in the final state top 10 ranking. The Panthers are not ranked, which Roche said suits them just fine going into the state tournament.

“Our guys are so athletic that we’re going to be in every game,” Roche said. “We’re kind of under the radar and liking that, so we’ll go to state and see if we can create some upsets.”

The Section 1 girls final was no repeat of the May 12 regular-season game between Lakeville South and Lakeville North, which South won in a 22-5 walk.

It was a battle throughout, unlike South’s first two Section 1 games, which the Cougars won by a combined 42-2.