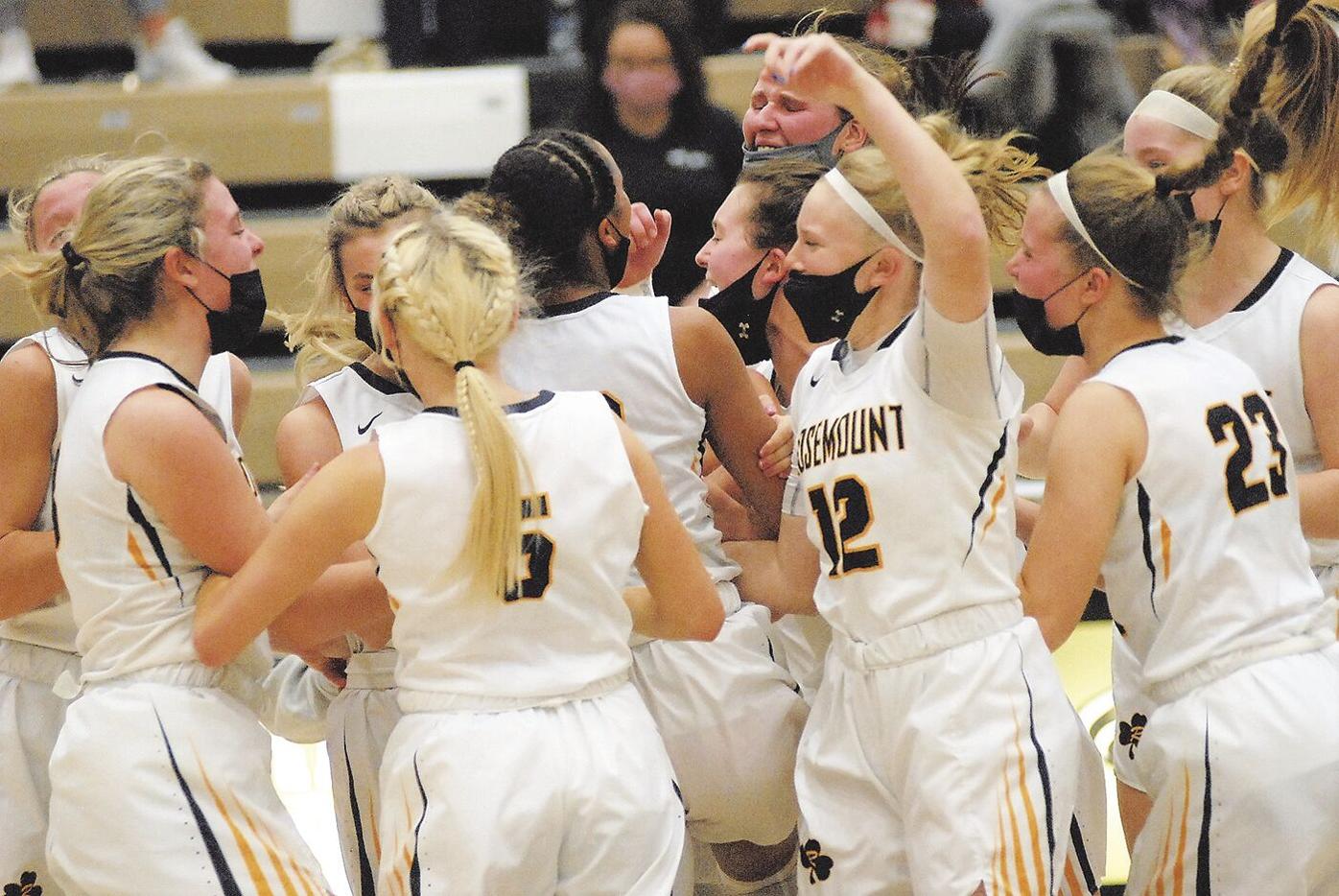 Rosemount players celebrate after their 52-44 victory over Farmington in a state Class 4A girls basketball quarterfinal game Tuesday at East Ridge High School. 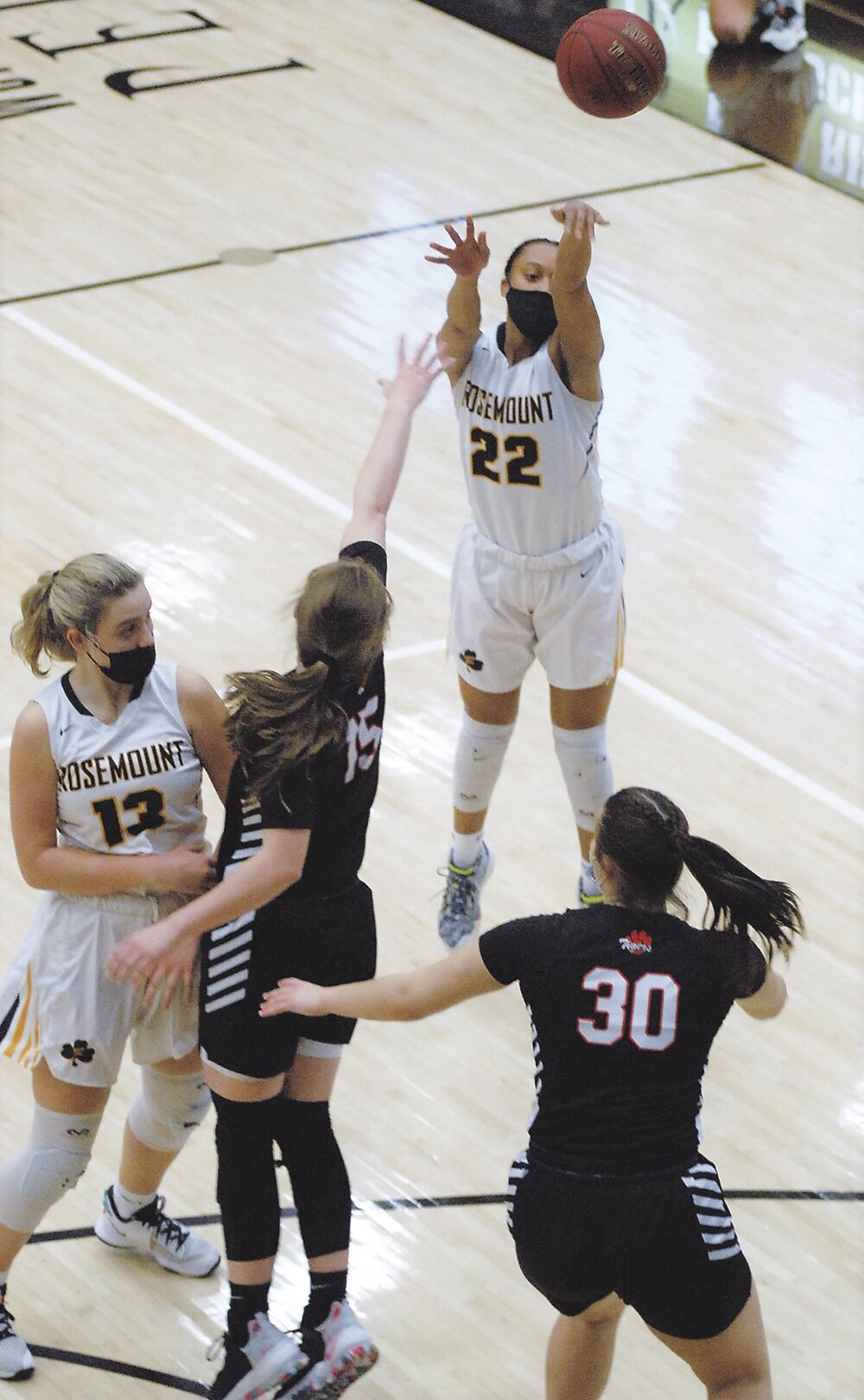 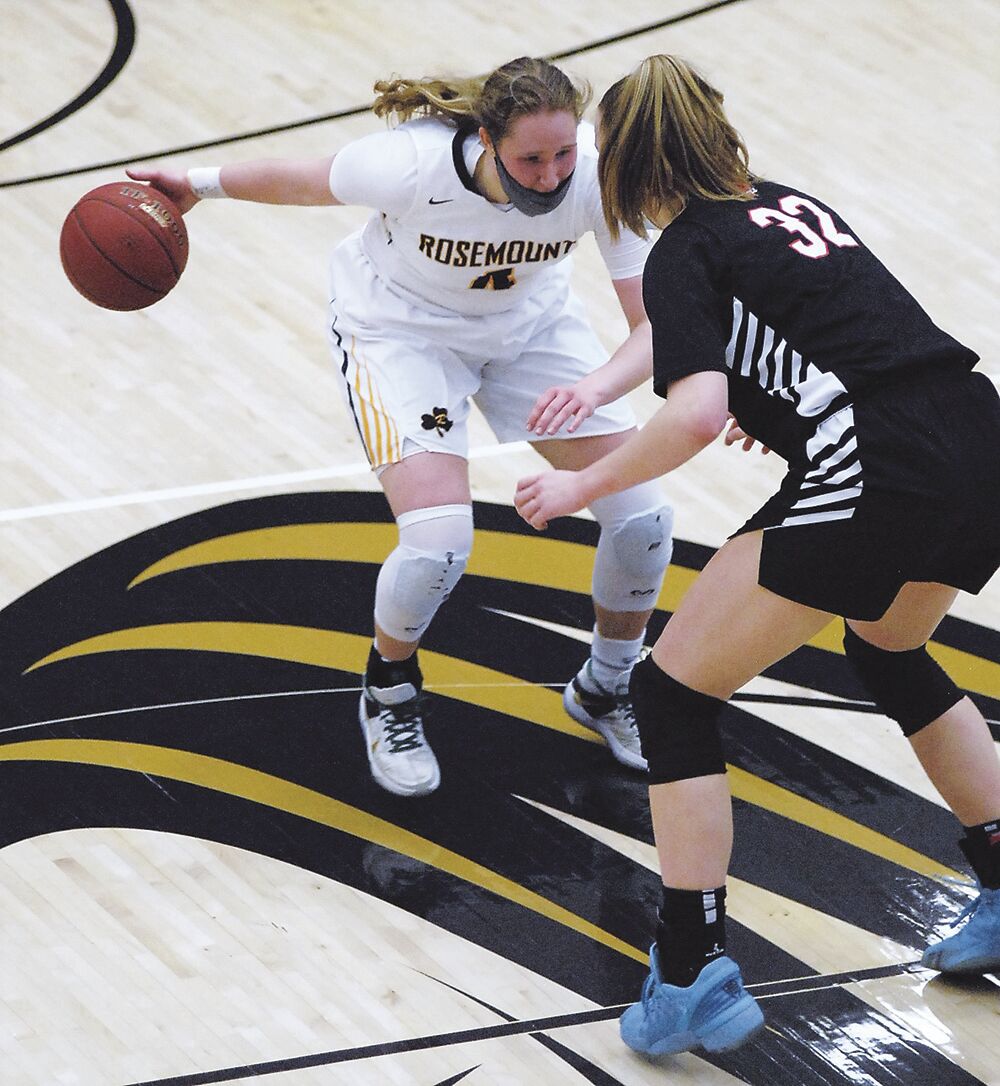 Rosemount players celebrate after their 52-44 victory over Farmington in a state Class 4A girls basketball quarterfinal game Tuesday at East Ridge High School.

Rosemount didn’t control its destiny in the section girls basketball finals. Once the Irish’s fate was placed back in the players’ hands, they refused to let go.

Chris Orr, the Irish coach, said his players were aware there would be questions about whether they deserved to be in the state girls basketball tournament after winning the Class 4A, Section 3 championship by forfeit. On Tuesday, they made it their mission to prove they belonged.

They did so, emphatically. Combining deft playmaking by senior Helen Staley and a stifling zone defense coach Chris Orr recently installed, the Irish knocked off previously undefeated and No. 2-ranked Farmington 52-44 in a state quarterfinal game that wasn’t as close as final margin suggests.

Next up for Rosemount (19-3) is a semifinal game against Centennial (21-1) at 9 p.m. Wednesday, April 7, at the Target Center. The winner will play Hopkins or Chaska in the championship game April 9.

Last week the Irish were preparing to face Lakeville North in the Section 3 championship game when they learned North couldn’t play. The Panthers had to go into contact tracing after a player with a previous opponent tested positive for COVID-19.

The Irish moved on to state for the first time since 2002, and yet it was a little unsettling. The victory over Farmington at East Ridge High School served as “validation,” Orr said.

“Nobody wants to be handed, in a sense, a state tournament berth,” he added. “We knew we were good enough to be here, we put in the work and we had the confidence. This was our game to prove it.”

Said Staley: “We really wish we would have gotten a chance to play (the section final), but it just means we had more built-up energy for this moment, and we wanted it more than anything.”

Farmington (21-1) saw its state championship dreams and 38-game winning streak end. The Tigers reached the 2020 state Class 4A final against Hopkins before it was called off because of the pandemic.

The Tigers’ last loss was to Rosemount on Jan. 10, 2020. They won their next three games against the Irish, but Orr said he believed his team was gaining ground. In the teams’ most recent game March 4, Rosemount trailed by one point late in the second half before losing 52-47.

On Tuesday, the Irish grabbed a quick 11-1 lead and Farmington never completely recovered. Rosemount led by as many as 15 in the second half before Farmington guard Peyton Blandin hit several three-pointers to bring her team closer. Blandin scored 26 of the Tigers’ 44 points.

The normally high-scoring Tigers were held below 50 points only one other time this season, in a victory over Eastview.

Rosemount’s game plan centered on “rebounding and lack of turnovers,” Orr said. “If we have the ball, they can’t score.”

On offense, the Irish were patient and picked their spots. Staley scored eight points but her ballhandling and passing were key to the attack. Farmington assigned 6-foot-4 senior center Sophie Hart to guard Staley.

Staley, however, stayed mostly near the top of the circle, bringing Hart out of the lane and depriving the Farmington defense of its intimidating shot-blocker. Staley frequently fired passes to teammates cutting to the basket for layups.

“That was definitely coach Orr’s biggest emphasis,” said Staley, who will play at Oakland University next year. “Keep Sophie out of the lane because she’s a great shot-blocker. Spacing was very important.”

Staley is the Irish’s second-leading scorer but said she likes dishing out assists. “I trust my teammates. I trust them all on the court. They executed, made shots, and I’m so proud of them,” she said.

Hart, a North Carolina State recruit, scored 14 points, meaning she and Blandin scored all but four of Farmington’s points. Maleah Scott and Paige Kindseth had two points each.

In the run-up to the state quarterfinal, Orr said he borrowed from Tampa Bay Buccaneers quarterback Tom Brady, who repeatedly texted teammates before the Super Bowl, telling them they were going to win.

Rosemount is on a seven-game winning streak, with No. 7 the most important by far because it means “now you go to the bright lights,” Orr said, referring to the Target Center. “Now you’ve earned it.”