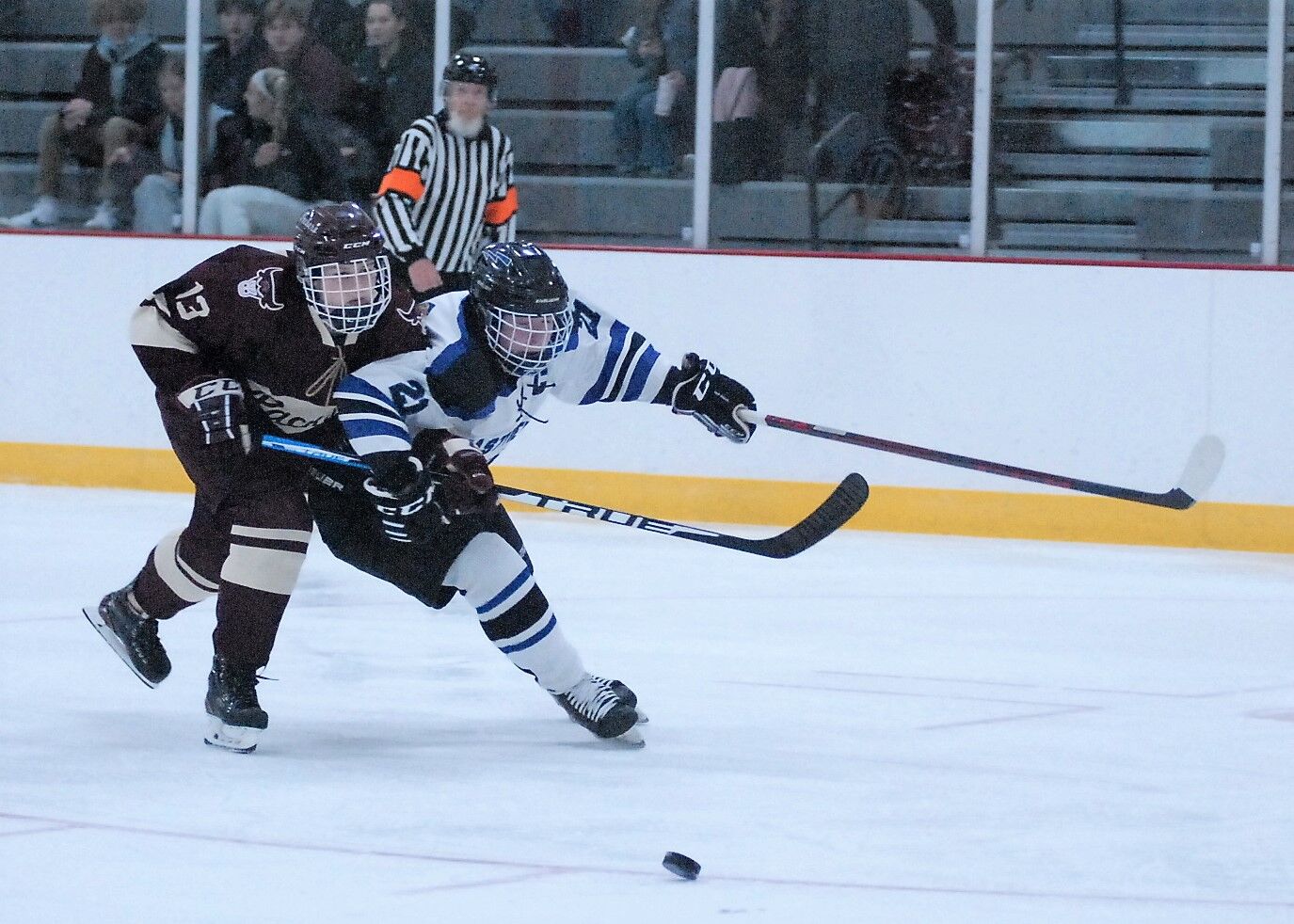 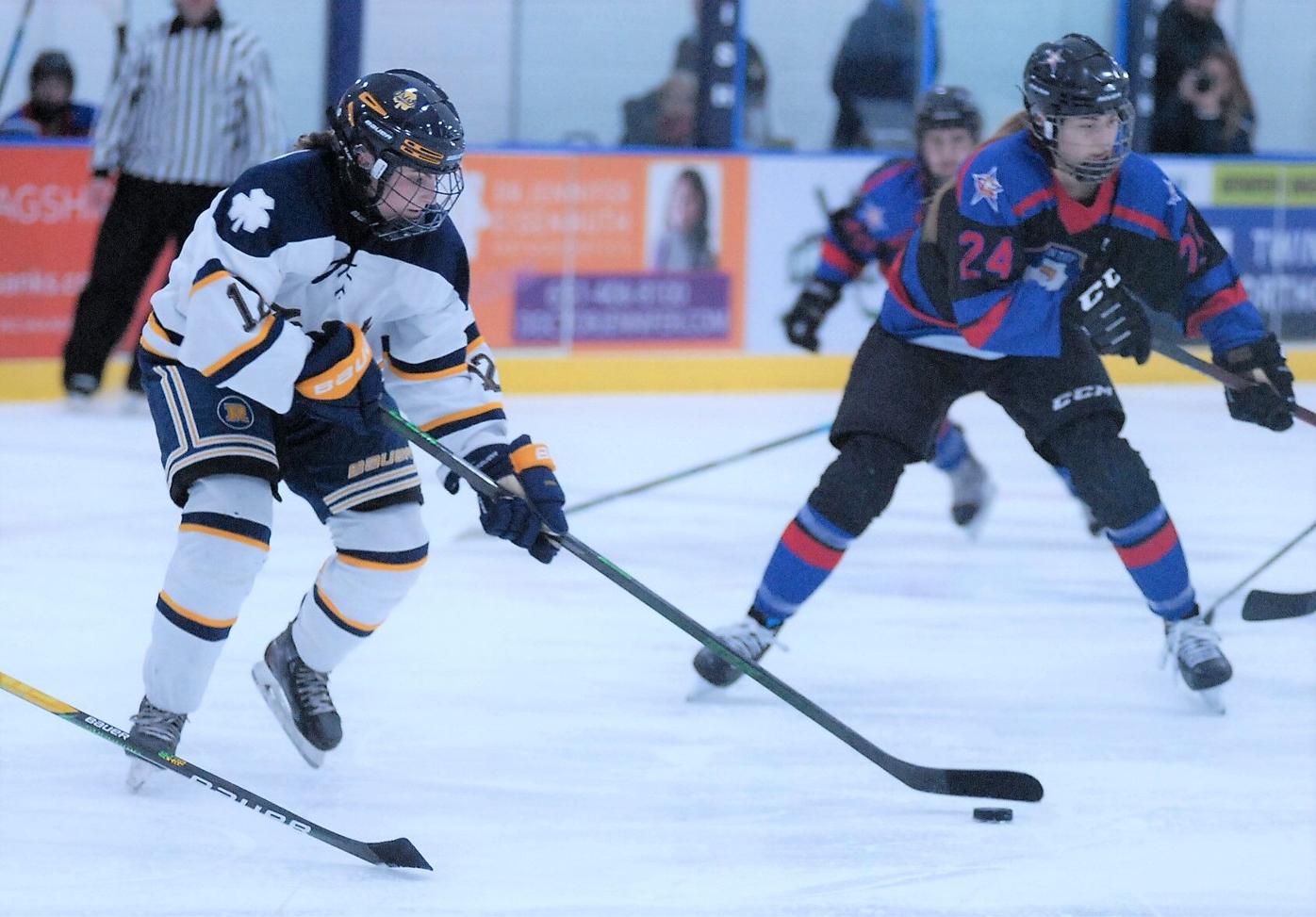 Anna Shandorf of Rosemount handles the puck in traffic during the Irish's 5-4 overtime victory over Gentry Academy on Tuesday.

Anna Shandorf of Rosemount handles the puck in traffic during the Irish's 5-4 overtime victory over Gentry Academy on Tuesday.

Although there were no SSC teams in the top 10 of this week’s Let’s Play Hockey Class AA rankings, three teams were in the second 10 – Lakeville South (11th), Eastview (15th) and Rosemount (17th). With several other teams knocking on the door of the top 20, that could indicate a scramble for the league championship this season.

Next game: at Minnetonka, 7 p.m. Thursday.

Outlook: The Eagles dropped off last year after winning the South Suburban Conference championship in 2019-20. But some significant players from that league championship team are back, including sisters and forwards Makayla and Marie Moran, who combined for 42 goals last season. Alternate captains Mazy Ryan and Faith Dougan are returning forwards. The roster is young with 12 players who are sophomores or younger.

Outlook: The Blaze had a rocky start in the season opener against Centennial/Spring Lake Park but the roster has talent, led by senior forward and Quinnipiac recruit Sami Bowlby, who had 28 points in 20 games last year. Forwards Zoie Dundon, Katie Katzmarek and Madisyn Krumholz also are returnees from the SSC championship team, as are defenders Caitlyn Procko and Olivia Carlson. The biggest issue might be replacing graduated goalie Maria Widen, who played almost every varsity minute last season and was nominated for Senior Goalie of the Year.

Outlook: After reaching the state semifinals for the first time last season, it’s no surprise the Lightning are aiming for as good or better this year. The building blocks include senior forward Avery Chesek, who has more than 100 career points, and senior defender Nora Stepan, who scored the goal in Eastview’s 1-0 victory over Stillwater in the Class AA quarterfinals. Returning goalie Angie Lombardi had a 1.78 goals-against average and .936 save percentage last season. Younger players likely to step into key roles include junior forward Jessica Wilhelm, who scored eight goals last year and had the game-winner against Shakopee last week.

Outlook: Many of the players who led Farmington on its run of four Section 1AA championships in five years have graduated, so it becomes a question of how quickly the Tigers can reorganize. One player who is back is junior defender Madison Kadrlik, whose goal with 35 seconds remaining was the game-winner as the Tigers beat Lakeville South 3-2 in the 2021 Section 1AA final. Forward Sam Moehle was the team’s second-leading scorer with 29 points in 21 games. Other returning players include senior forward Elly Palodichuk, senior defender Reegan Werner and senior forward Olivia Andrews. The Tigers have a junior, ninth-grader and eighth-grader competing for varsity playing time in goal.

Outlook: Senior forward Meredith Jensen, a Dartmouth commit, scored two goals in the Panthers’ victory over Moorhead last week. Sophomore Gracie Hanson returns after an 11-goal season in 2019-20. Defender Megan Olson and forward Gianna Gasparini are returning seniors on a team that otherwise will be quite young. Junior Tulie Boughan, new to the North program this year, got her first varsity victory in goal by making 19 saves against Moorhead. The Panthers return to Section 1AA for postseason play after two years in Section 3AA.

Outlook: The Cougars return three of the South Suburban Conference’s most dynamic players in seniors Taylor Otremba, Claire Enright and Ryann Wright. Otremba has signed with Minnesota State Mankato and Enright is headed to Wisconsin. Enright also will play for Team USA in the Under-18 world championships in Sweden in January. The challenge for South might be developing some balance; Otremba, Enright and Wright scored almost 75 percent of the goals last season. Junior Chloe Hwong and sophomore Nicole McKinney return on defense, and senior Payton Lang may be poised to take over in goal after backing up Lauren Sorvari last year.

Next game: at Eastview, 2 p.m. Saturday.

Outlook: At times last season the Irish looked like a team that could contend for the Section 3AA championship, and a number of those players are back this season. Senior forward Whitney Tuttle, who signed last week with Minnesota State Mankato, is coming off a 39-point season. Also back is forward Sophie Stramel, who scored 18 points as an eighth-grader. Ava Webster, Lauren Sundgren, Brooke Pomeroy, Lilly Nelson and Madalana Donati are senior defenders playing in front of goalie Rithima Chittajallu, also a senior. Multi-sport athlete note: Two standouts from Rosemount’s state championship softball team, Jessa Snippes and Cece Hanson, are forwards for the hockey team, as Joey Edgar, a defender on the Irish’s girls soccer team who plays forward in hockey.