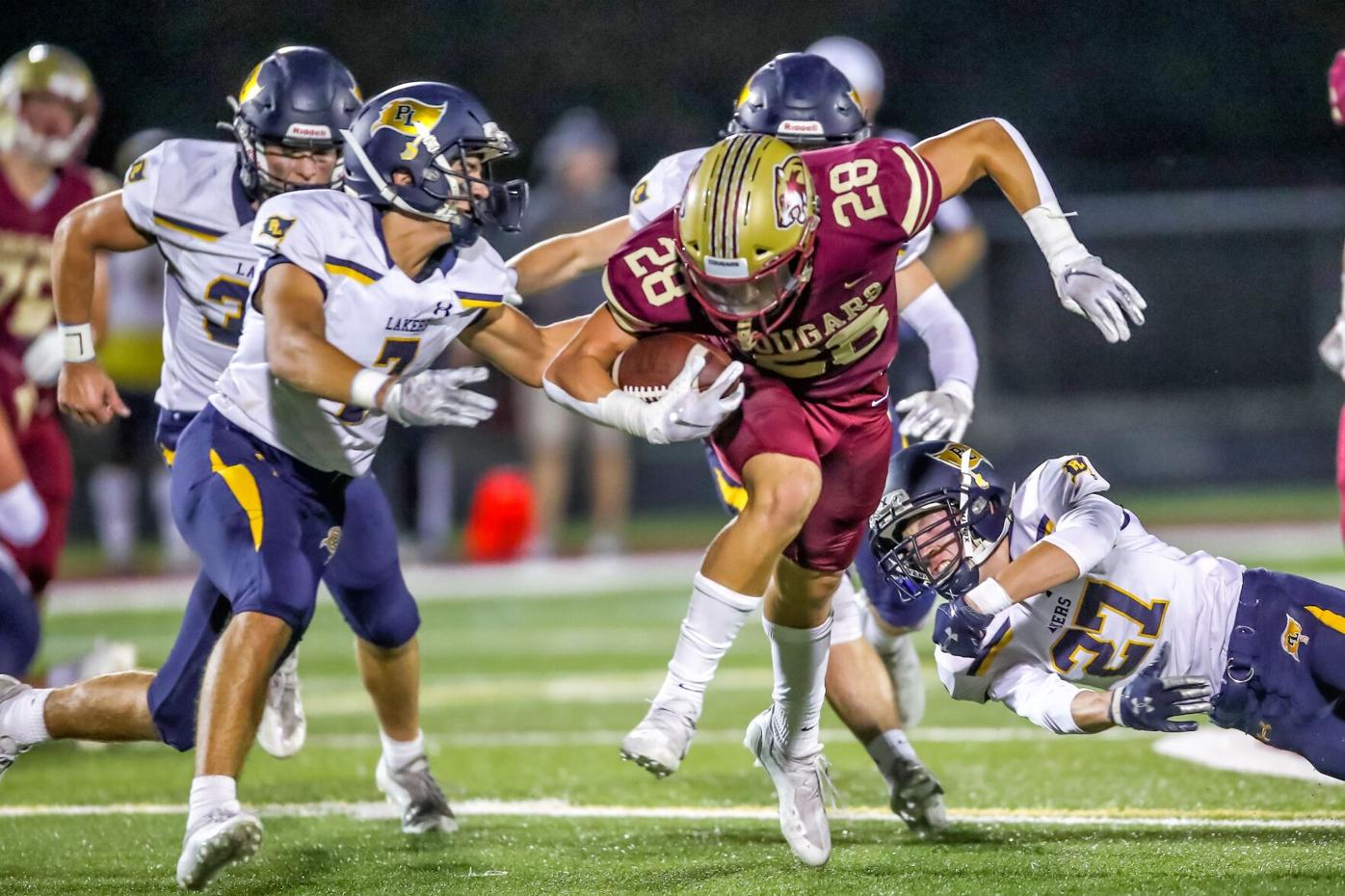 Carson Hansen rushed for three touchdowns in Lakeville South's 25-13 victory over Prior Lake on Oct. 7, making the junior the school's career leader in that category. 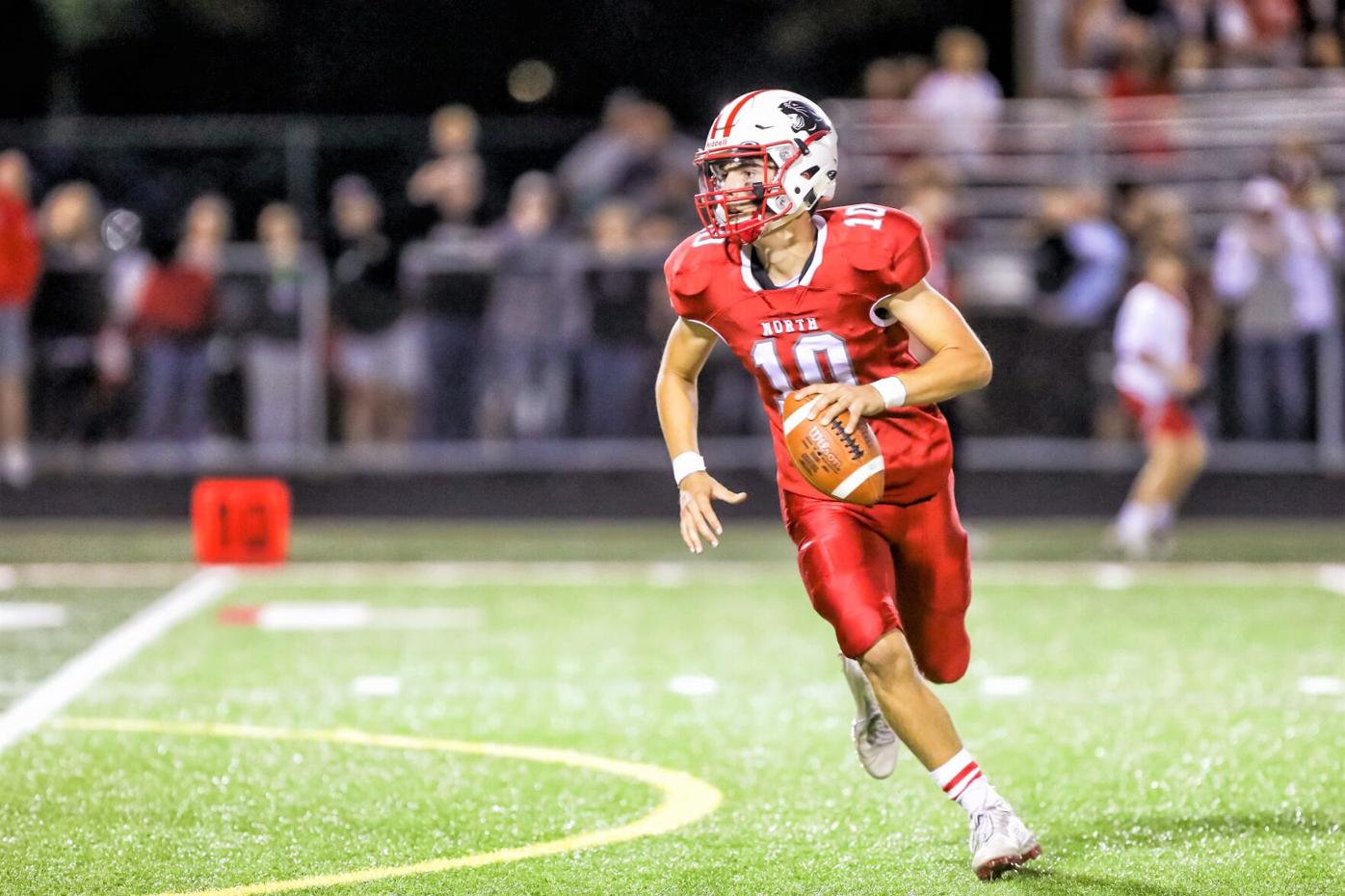 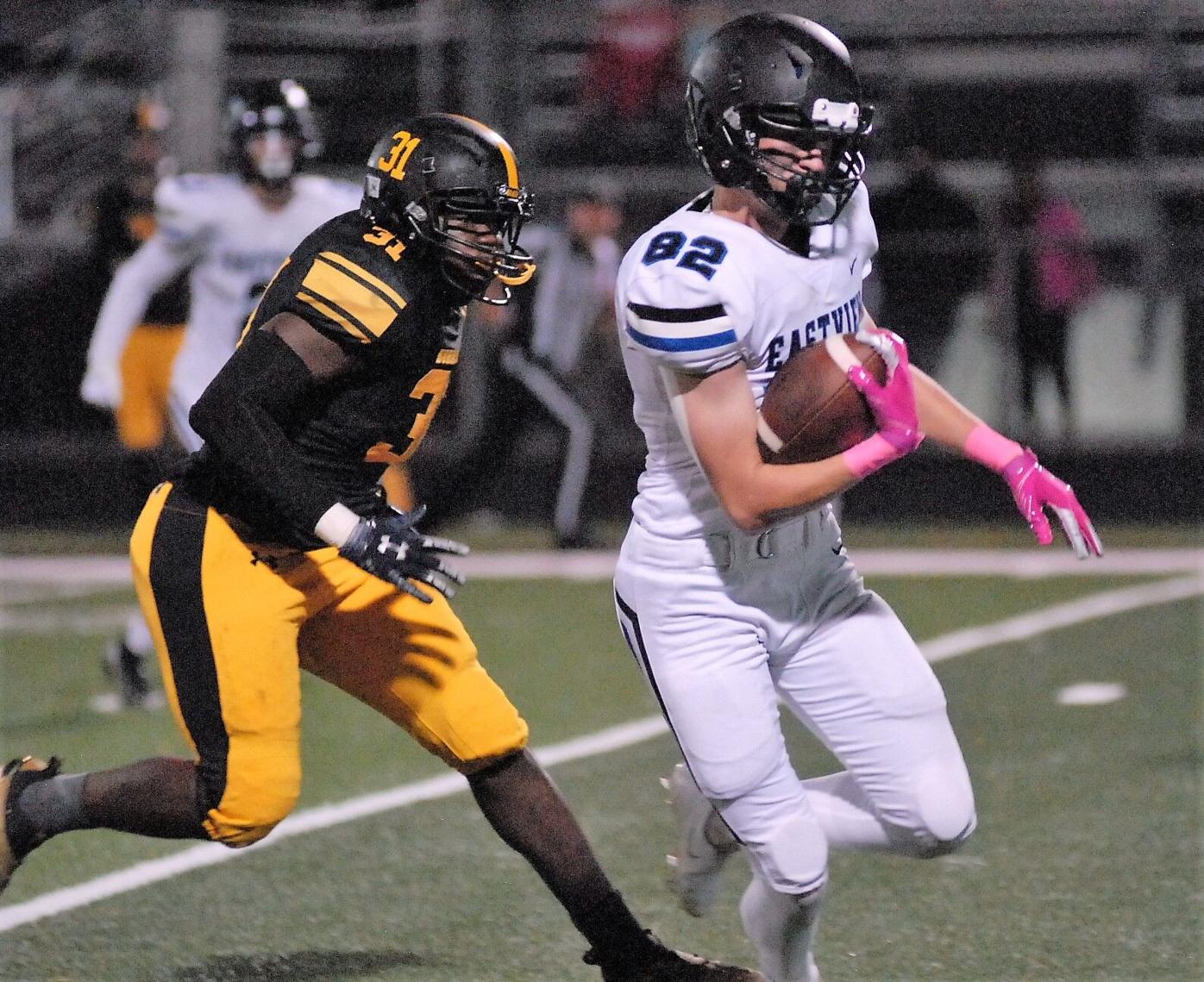 Eastview tight end Nick Brandt picks up yards after catching a pass in the first quarter of the Lightning's 33-27 victory at Burnsville on Oct. 8. Trying to run down Brandt is Burnsville's Dun Fahnbulleh.

Carson Hansen rushed for three touchdowns in Lakeville South's 25-13 victory over Prior Lake on Oct. 7, making the junior the school's career leader in that category.

Eastview tight end Nick Brandt picks up yards after catching a pass in the first quarter of the Lightning's 33-27 victory at Burnsville on Oct. 8. Trying to run down Brandt is Burnsville's Dun Fahnbulleh.

When Prior Lake went on a lengthy drive to score on its first possession, it was the first time all season Lakeville South trailed in a football game.

It didn’t take long for the Cougars to get over the shock.

On their first play from scrimmage, Carson Hansen broke loose for a 65-yard touchdown run. Although a failed two-point conversion attempt still had South behind by one point, a 55-yard run by quarterback Camden Dean later in the first quarter put the Cougars ahead to stay in a 25-13 home-field victory Oct. 7. No. 1-ranked Lakeville South, now 6-0, is one of two undefeated teams in Class 6A, with Stillwater being the other.

Hansen’s first-quarter score was the 23rd rushing touchdown of his career, tying a Lakeville South program record. He took over first place on the career touchdowns list with two scores in the third quarter of 4 and 63 yards. With anywhere from three to seven games remaining in the 2021 season and the entire 2022 season in front of him, the junior will have plenty of opportunities to add to his total of 25.

Prior Lake (3-3) stayed in the game throughout but had difficulty keeping up with a South offense that averaged more than 9 yards per rushing play and gained 457 yards overall.

“Twenty-eight points is our goal. We feel if we can score that many we’ll win most games,” Lakeville South coach Ben Burk said. “Twenty-five doesn’t look as good because we missed some conversions, but we have big-play potential and also the ability to grind out the clock at the end, keep control and give our defense a break.”

It probably wasn’t the Cougars’ best performance even though they were turnover-free for the fifth time in six games. Burk said the red-zone offense wasn’t as efficient as they’re used to seeing.

“We had some trouble with two-point conversions; (Prior Lake) had a great plan for those. It put us in a little bit of a bind, but at the end of the day we made enough plays to win.”

Hansen rushed for 260 yards on 18 carries, scored three touchdowns and added a two-point conversion. In six games this season he has 1,053 rushing yards and 12 touchdowns (Hansen also has one receiving touchdown). On average, the chains move every time Hansen runs with the ball; he’s averaging 11.7 yards per carry.

Dean rushed for 74 yards and Josh Jacobson gained 59 against Prior Lake. Linebacker Owen McCloud had 15 tackles.

South’s Zach Juckel ended Prior Lake’s final scoring threat in the fourth quarter when the senior linebacker stayed with a Lakers running back 30 yards downfield and intercepted a pass. The “wheel route” was a play the Cougars expected to see at some point because Prior Lake had run it successfully in earlier games.

Juckel, however, was ready.

“Zach Juckel is the smartest kid on our team and also happens to be one of the best athletes,” Burk said. “It goes back to film study, preparation and being able to be coached.”

Overall, “our defense was good, not great,” Burk said. “They’re used to playing at a higher level. There’s a lot of film to watch, a lot of things to go back and correct to get ready for Shakopee.”

Shakopee (5-1) was ranked second in Class 6A last week, but is likely to drop after losing to Eden Prairie 23-0 last week. Lakeville South plays the Sabers at 7 p.m. Thursday at Shakopee West Middle School.

The Sabers averaged almost 50 points in their first four games but the offense hasn’t been the same since starting quarterback Dominic Jackson was injured in a Sept. 24 victory over Edina. Since then Shakopee scored nine points in a victory over Lakeville North before being shut out at Eden Prairie.

But Shakopee still has some playmakers, most notably running backs Jadon Hellerud and Chandler Ross Jr., who have combined for 1,180 rushing yards and 13 touchdowns.

Lakeville South closes the regular season at home against Hopkins on Oct. 20. The Cougars likely have clinched one of the four No. 1 seeds in the Class 6A playoffs as they are the only team in Section 3 with a record better than 3-3.

The Panthers ended their offensive slump and four-game losing streak the same night.

North scored three touchdowns in the first half, taking an 18-0 lead. Edina pulled within 12 points a couple of times but never overcame the early Panthers blitz.

Gavyn Schraufnagel rushed for 144 yards on 30 carries and scored four times – twice in the first quarter and once each in the third and fourth. Tommy Niggeling gained 101 yards on just six attempts and scored a first-quarter touchdown.

Grossman, the third player to start at quarterback for the Panthers this season, completed seven of 13 passes for 171 yards. His first varsity touchdown pass was 46 yards to Ryan Brodin in the second quarter.

Five different players caught passes for the Panthers. Blake Gode had two catches for 48 yards and Najee Nelson two for 44.

By scoring 46 points against the Hornets, Lakeville North exceeded its total (35) for the first five games. The Panthers had 457 yards against Edina after being held below 100 by Shakopee the previous week.

The Panthers, looking to strengthen their case for a first-round home game in the Class 6A playoffs later this month, play at Farmington (3-3) at 7 p.m. Thursday. Farmington also is coming off a key victory, having defeated Rosemount 13-3 in the Tigers’ homecoming game.

Final regular-season game for Lakeville North is Oct. 21 at Forest Lake. The Class 6A playoffs are scheduled to start Oct. 29.

The rout appeared to be on when Eastview scored three touchdowns in the first quarter of its Oct. 8 game at Burnsville’s Dick Hanson Field.

It was not. Burnsville scrambled back into it, pulling within one score on a couple of occasions. Eastview senior running back Tyler Jerstad scored his team’s fifth and final touchdown late in the third quarter – and the Lightning needed it, considering the Blaze responded early in the fourth to make it a six-point game. That was as close as Burnsville would get, however.

The victory, Eastview’s second in a row and third in the last four games, evened the Lightning’s record at 3-3. It also marks the first time Eastview has been .500 or better since the middle of the 2019 season.

And now the Lightning get to go home. They will play East Ridge at 7 p.m. Friday in the first varsity football game at the refurbished Lightning Stadium, which features new artificial turf and a resurfaced track. The football team played home games at Rosemount and Eagan high schools until the stadium was ready.

East Ridge also is 3-3 and the winner of Friday’s game could go a long way toward securing home field in at least the first round of the Class 6A playoffs. East Ridge defeated previously unbeaten Woodbury on Oct. 1 but stumbled against Osseo last week, losing 17-14.

This week also is the 25th homecoming week in Eastview High School history and the football game will be part of the Tackle Cancer fundraising effort.

Final regular-season games for the Lightning and Blaze are Thursday, Oct. 21, with Eastview at home against Edina and Burnsville traveling to Rosemount.

The Eagles are back at home this week after a difficult night on the road Oct. 8. But they won’t get a breather. On Friday, they meet undefeated and third-ranked (Class 5A) St. Thomas Academy for a 7 p.m. kickoff.

Apple Valley (1-5) allowed 27 points in the second quarter of its loss at Robbinsdale Armstrong last week. Quarterback Jamen Malone passed for 197 yards and three touchdowns for the Falcons (5-1), while Ernest Evans rushed for 124 yards and two scores.