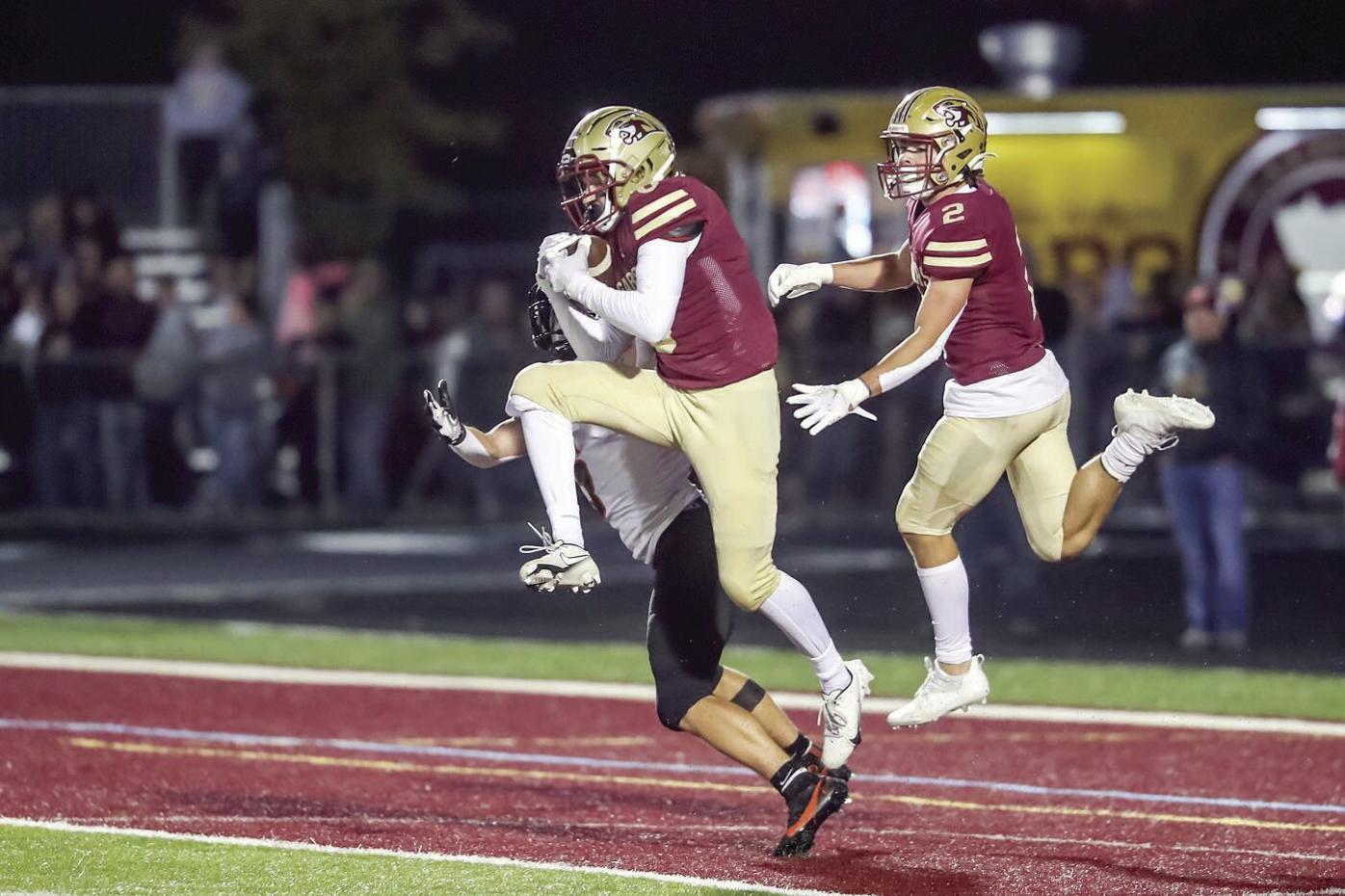 Hunter Webster of Lakeville South makes one of his two interceptions in the Cougars' 36-14 victory over Farmington on Sept. 24. 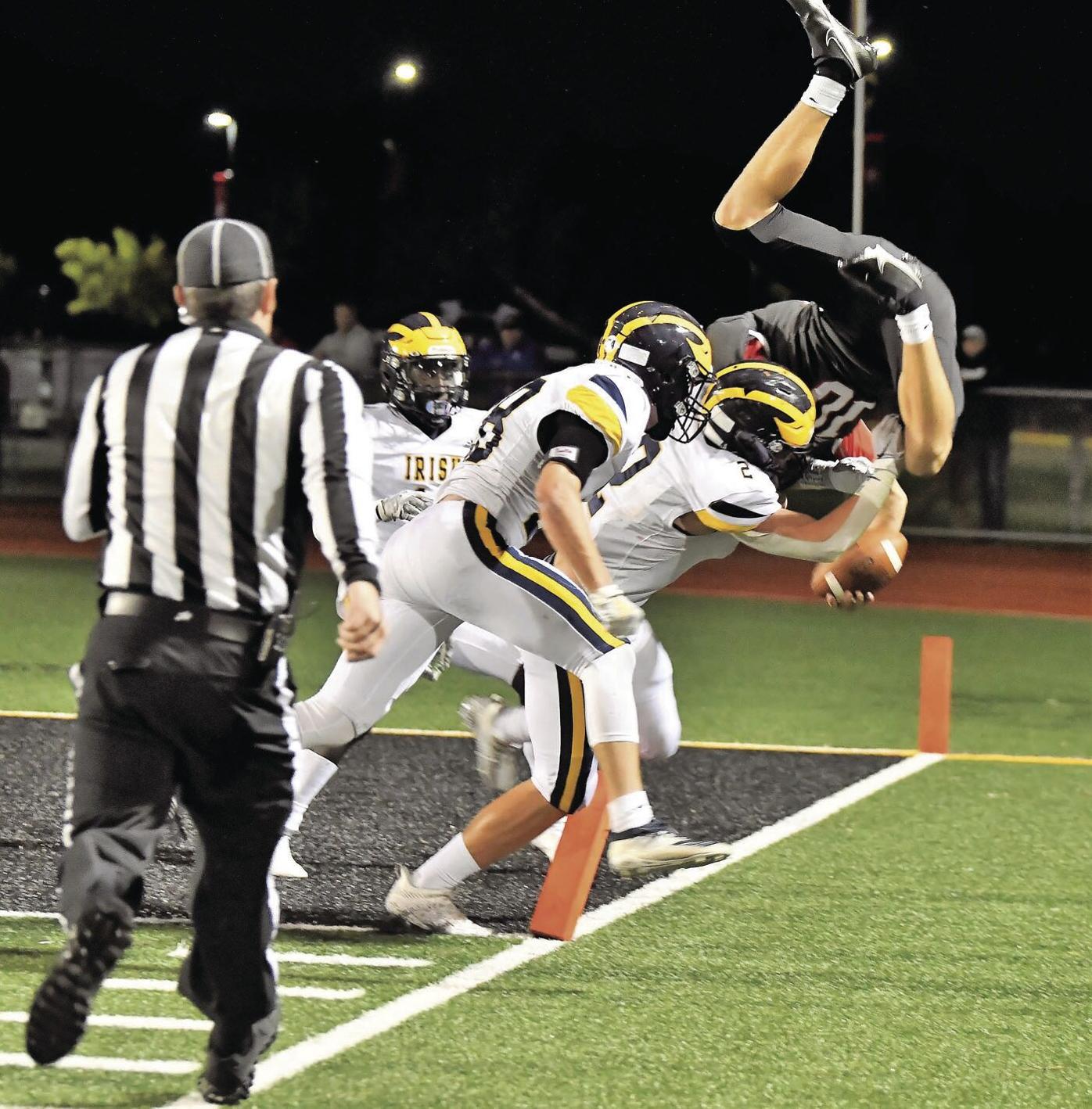 Rosemount's Josh Liggett drives Eden Prairie quarterback Nick Fazi out of bounds near the goal line during a Sept. 24 football game. Eden Prairie won 13-3, handing the Irish their first loss of the season. 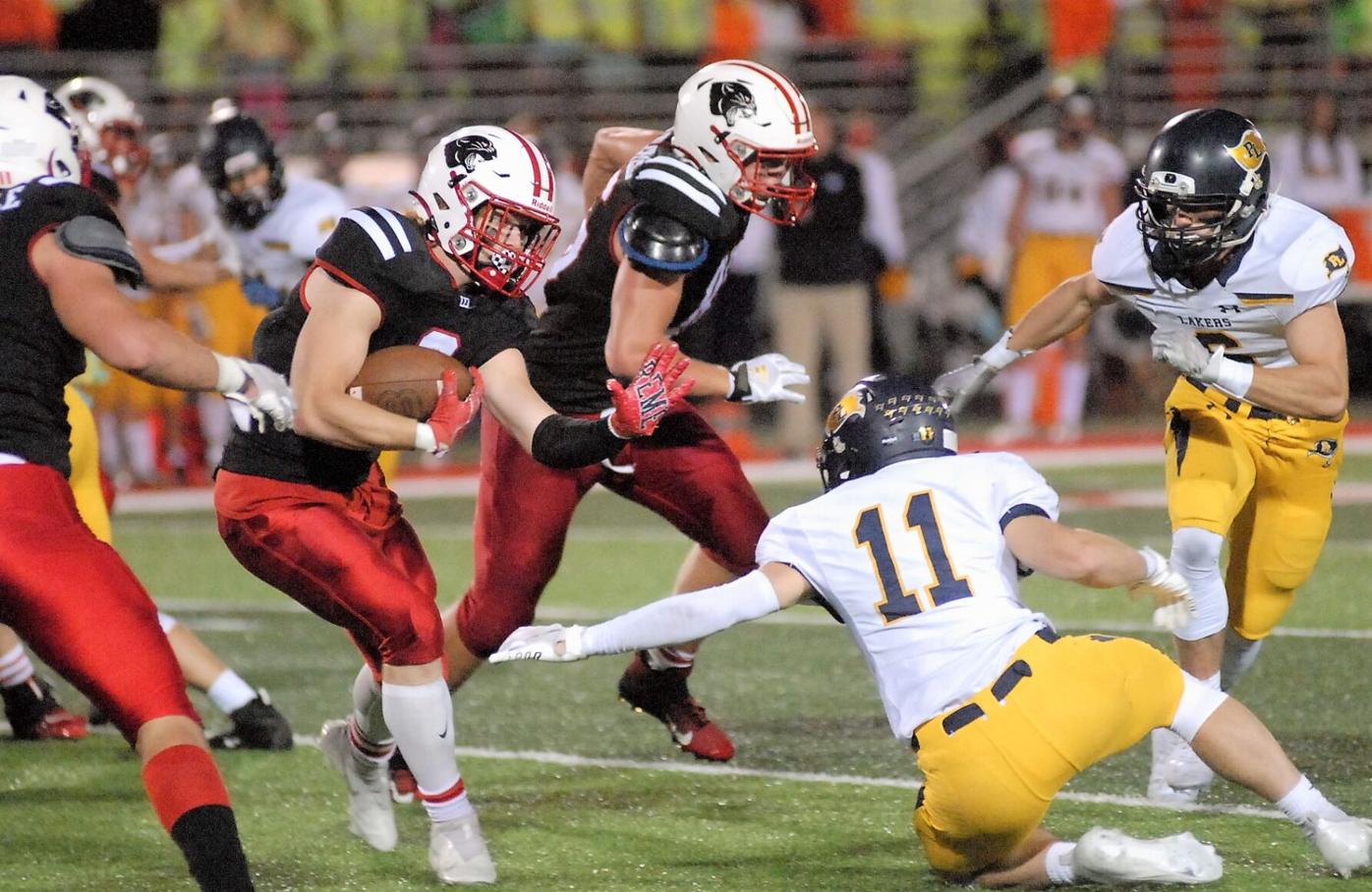 Lakeville North's Jackson Hanson picks up yards during the Panthers' 17-14 loss to Prior Lake last week. 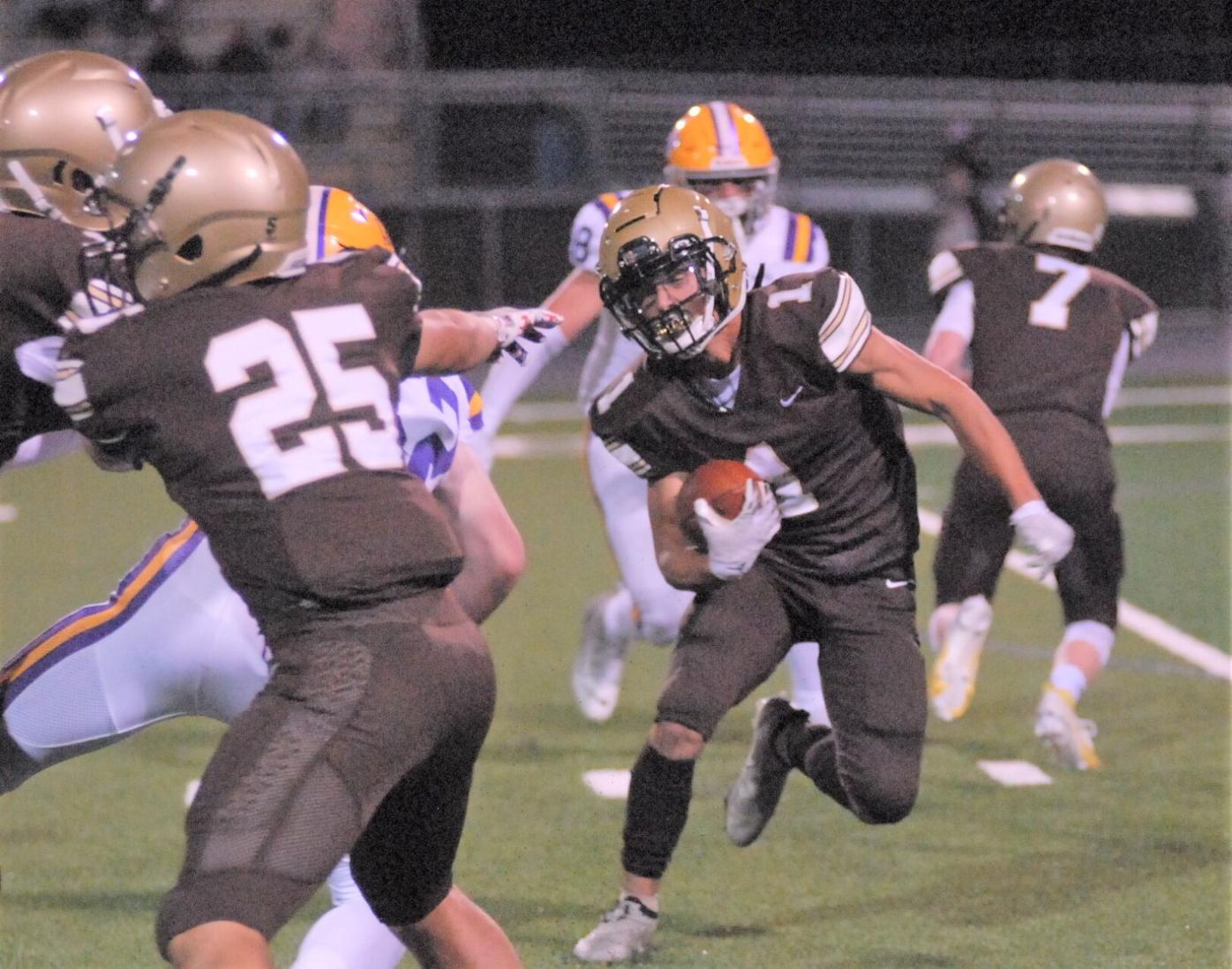 Hunter Webster of Lakeville South makes one of his two interceptions in the Cougars' 36-14 victory over Farmington on Sept. 24.

Rosemount's Josh Liggett drives Eden Prairie quarterback Nick Fazi out of bounds near the goal line during a Sept. 24 football game. Eden Prairie won 13-3, handing the Irish their first loss of the season.

Lakeville North's Jackson Hanson picks up yards during the Panthers' 17-14 loss to Prior Lake last week.

There was a chance for the second No. 1 vs. No. 2 matchup in three weeks, but Eden Prairie spoiled those plans.

The Eagles’ 13-3 victory over Rosemount on Sept. 24 almost certainly will move the Irish down a few spots in this week’s Associated Press Class 6A football rankings (the rankings had not been released when this edition went to press). Before playing at Eden Prairie last week, Rosemount had been ranked second in the enrollment class.

The Irish will be at home against No. 1-ranked Lakeville South at 7 p.m. Friday. South’s place at the top of the poll remains secure after its 36-14 victory over Farmington last week.

Lakeville South (4-0) is one of five unbeaten teams in Class 6A, with Shakopee, Woodbury, Stillwater and Wayzata being the others. Rosemount enters Friday’s game with a 3-1 record.

It’s a game that might have happened last season had COVID-19 not intervened. The Cougars and Irish did not meet in 2020, either in the regular season or the playoffs. South finished 8-0, Rosemount was 6-0, and they were two of the three teams that could make a case for being the unofficial Class 6A champion (the other was Eden Prairie, which also went undefeated).

Friday’s game features a Lakeville South team known for its powerful rushing game against a Rosemount offense looking to establish one. The Cougars rushed for 255 yards against Farmington last week, with quarterback Camden Dean gaining 55 yards on seven carries and scoring three times. Carson Hansen and Josh Jacobson also had touchdown runs for the Cougars, who led 36-0 after three quarters. Jacobson led the Cougars with 97 yards on the ground.

Defenses can’t sell out to stop the run against South. Dean completed just three passes (in five attempts) against Farmington, but all went for 37 yards or more.

Rosemount will look to activate its running game Friday. The Irish had just 72 yards on the ground and 145 yards of total offense against Eden Prairie. The Rosemount-Eden Prairie game might have turned in the second quarter, when the Irish fumbled inside the EP 5-yard line and the Eagles recovered in the end zone. Eden Prairie then drove 80 yards for a touchdown and a 10-0 lead.

Jayden Washington rushed for 52 yards on 16 carries against Eden Prairie and quarterback Vincent Pyne completed 10 of 15 passes for 72 yards, but the Irish’s only scoring was a 20-yard field goal by Leyton Simmering in the third quarter.

The Class 6A football realignment completed in the offseason means teams such as Lakeville South and Rosemount are in the middle of a grueling part of the schedule against other Class 6A powers. After playing Rosemount, Lakeville South takes on a Prior Lake team that was 3-1 this week and a Shakopee squad that won its first four games. Rosemount moves on to a rivalry game against Farmington, followed by a game at Prior Lake.

Two slumping teams will try to reverse their fortunes when Farmington plays at Edina at 7 p.m. Friday. The Tigers are 1-3 and have lost their last three games. Edina is one of four Class 6A teams that has yet to win this season.

Although the Tigers couldn’t climb out of a 36-point hole in their loss to Lakeville South last week, their offense did have its moments. Senior running back Rod Finley gained 136 yards on 22 carries and scored once. Quarterback Connor Weed completed 11 of 21 passes for 101 yards.

It was a busy night for Finley last week at Lakeville South. In addition to leading Farmington in rushing, he led the defense with 11 tackles, seven unassisted. Zach Dahl made 10 stops for Farmington.

A holding penalty in the fourth quarter might have denied Lakeville North a chance for its second victory.

Holding a 14-7 lead, the Panthers faced fourth and two at the Prior Lake 32-yard line – too close to the goal line to punt, but probably out of field-goal range. They went for the first down and quarterback Seth Johnson completed a pass to Najee Nelson near the goal line.

But instead of the Panthers having a chance to go up two scores, a holding penalty nullified the play, pushed them back 10 yards and forced them to punt. Prior Lake (3-1) drove 90 yards for a touchdown, went in front by completing a pass for a two-point conversion and added a safety later in the quarter.

Lakeville North (1-3) has lost three straight despite not allowing more than 17 points in a game this season.

Schraufnagel gained 79 yards on 20 carries and Jackson Hanson rushed 14 times for 49 yards. Johnson completed four of nine passes for 75 yards and a touchdown.

Cretin-Derham Hall took the lead with two second-quarter touchdowns and stayed in front the rest of the way, spoiling the Eagles’ home opener on their new turf field.

That leaves the Eagles (0-4) still searching for their first victory, but the opportunity could arrive this week when they play host to Two Rivers at 7 p.m. Friday. Two Rivers (formerly Henry Sibley) also is 0-4 and has lost its last three games by a combined 134-14. Apple Valley defeated Two Rivers 22-20 in its final game of the 2020 season to finish 2-4.

Woodbury, which was tied for eighth in last week’s Class 6A rankings, improved to 4-0 with its victory at Burnsville on Sept. 24.

An interception return for a touchdown on Burnsville’s first drive put the Blaze offense on its heels and it never recovered. Burnsville had just 119 yards for the game. The Blaze’s Christian Belt caught four passes for 42 yards and rushed for 20.

Linebacker Colton Gregersen and lineman Dylan Fischer each had 16 tackles for Burnsville (1-3). Twelve of Fischer’s tackles were unassisted.

Next up for the Blaze is a game at Park of Cottage Grove at 7 p.m. Friday. Park, an addition to Class 6A this season, routed Hopkins 45-7 last week. Burnsville defeated Hopkins 14-7 in Week 2.

The Wildcats fell behind 24-0 at halftime in dropping to 0-4.

Quarterback Landon Tonsager scored both Wildcat touchdowns on runs of 22 and 4 yards.

Two of the Wildcats’ first four opponents are ranked in the Class 6A top 10, but the next few weeks offer the prospect of more competitive games. Eagan is home against Eastview (1-3) at 7 p.m., looking to make it two in a row over the Lightning. Eagan defeated Eastview 37-15 last year for its only victory of the 2020 season.

The Wildcats also play at 0-4 Hopkins on Oct. 9 and at home against 1-3 Burnsville on Oct. 15 before closing the regular season against Shakopee, another top-10 team in Class 6A.

Eastview recovered after trailing 19-0 at halftime, at one point cutting White Bear Lake’s lead to five points. But the Lightning couldn’t make it all the way back and their bid for a second consecutive victory ended.

Eastview (1-3), which gained 357 yards rushing against Park of Cottage Grove the previous week, was held to 46 yards by White Bear Lake in the Sept. 24 game at Eagan High School.

Lightning quarterback Layne Applegate completed 12 of 19 passes for 103 yards and threw an 8-yard touchdown pass to Austin Weaver in the third quarter. A 1-yard run by Damon Green in the fourth quarter cut White Bear Lake’s lead to five points.

Eastview returns to Eagan High School on Friday, this time to take on Eagan at 7 p.m. Friday. The Lightning will be anxious to avenge a 37-15 loss at Eagan last season, which turned out to be the Wildcats’ only victory of 2020.