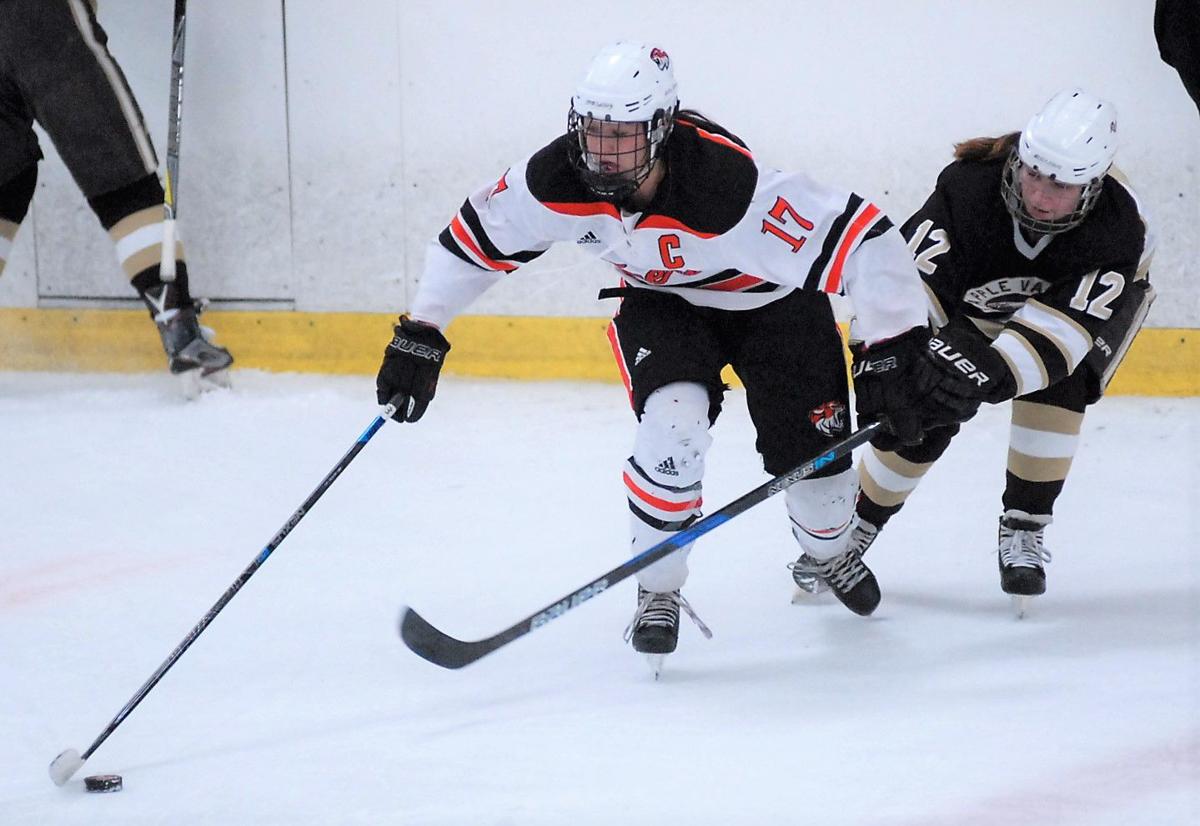 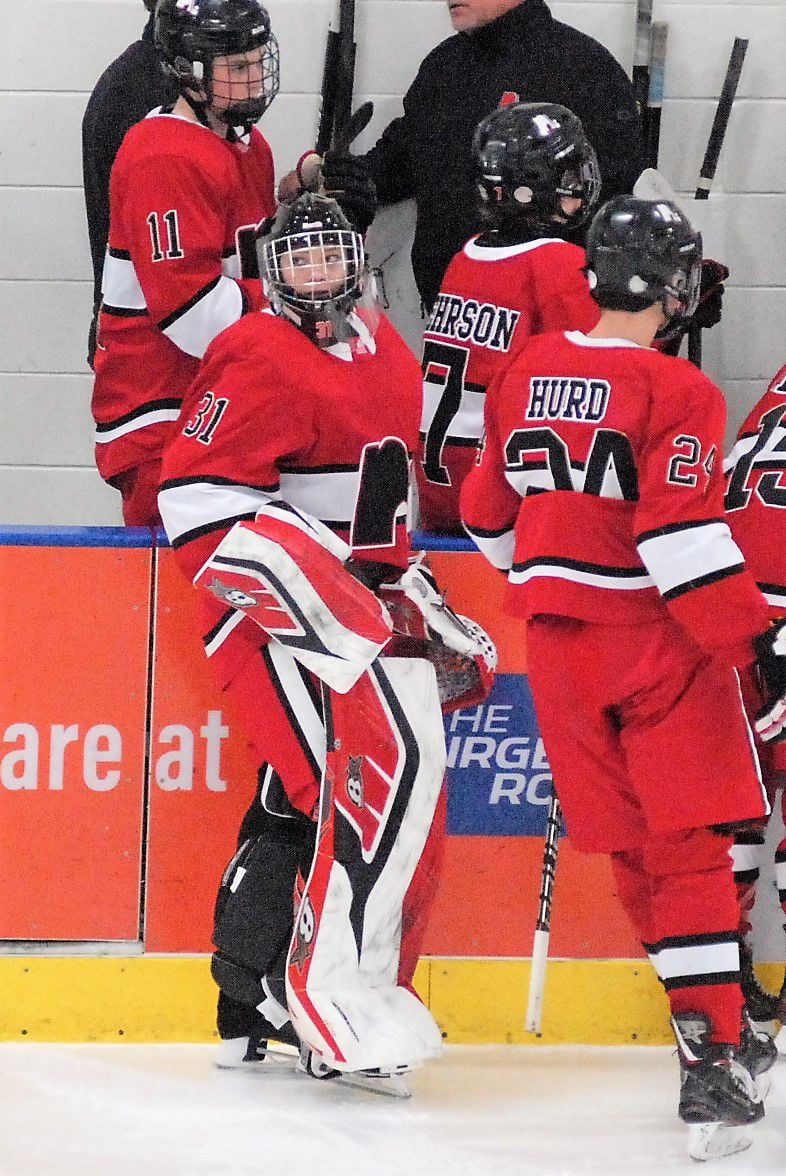 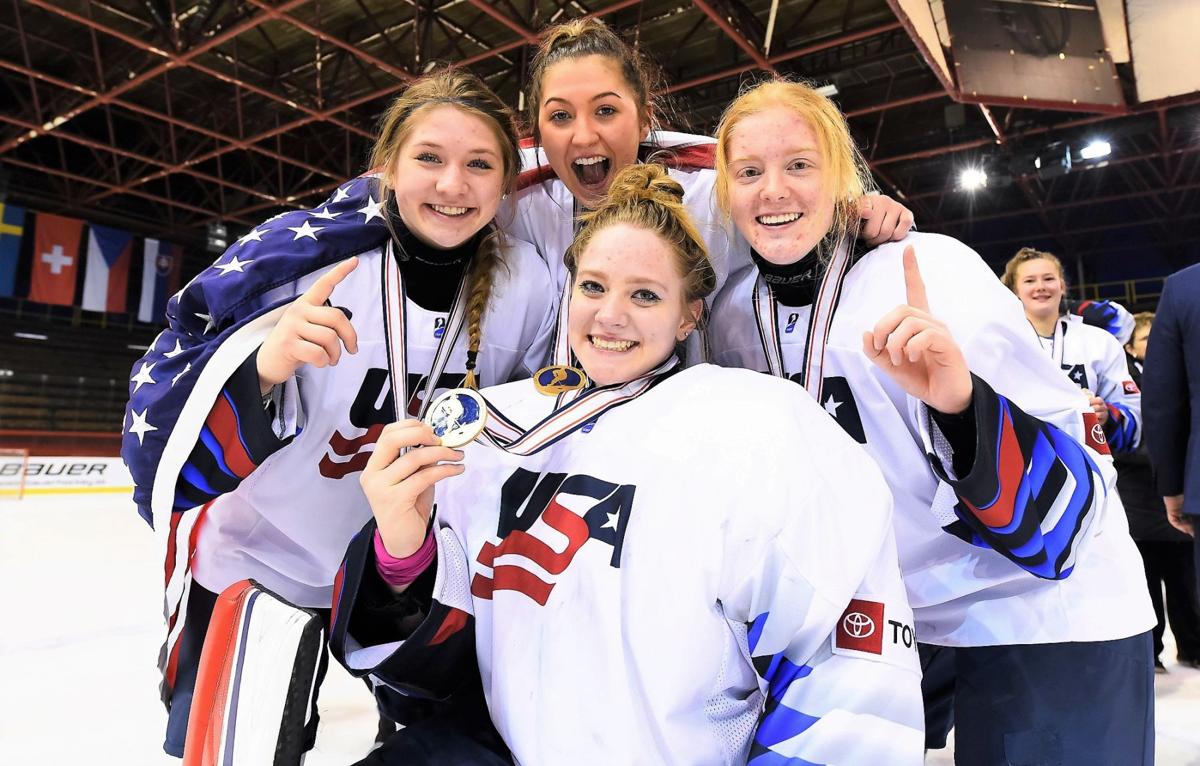 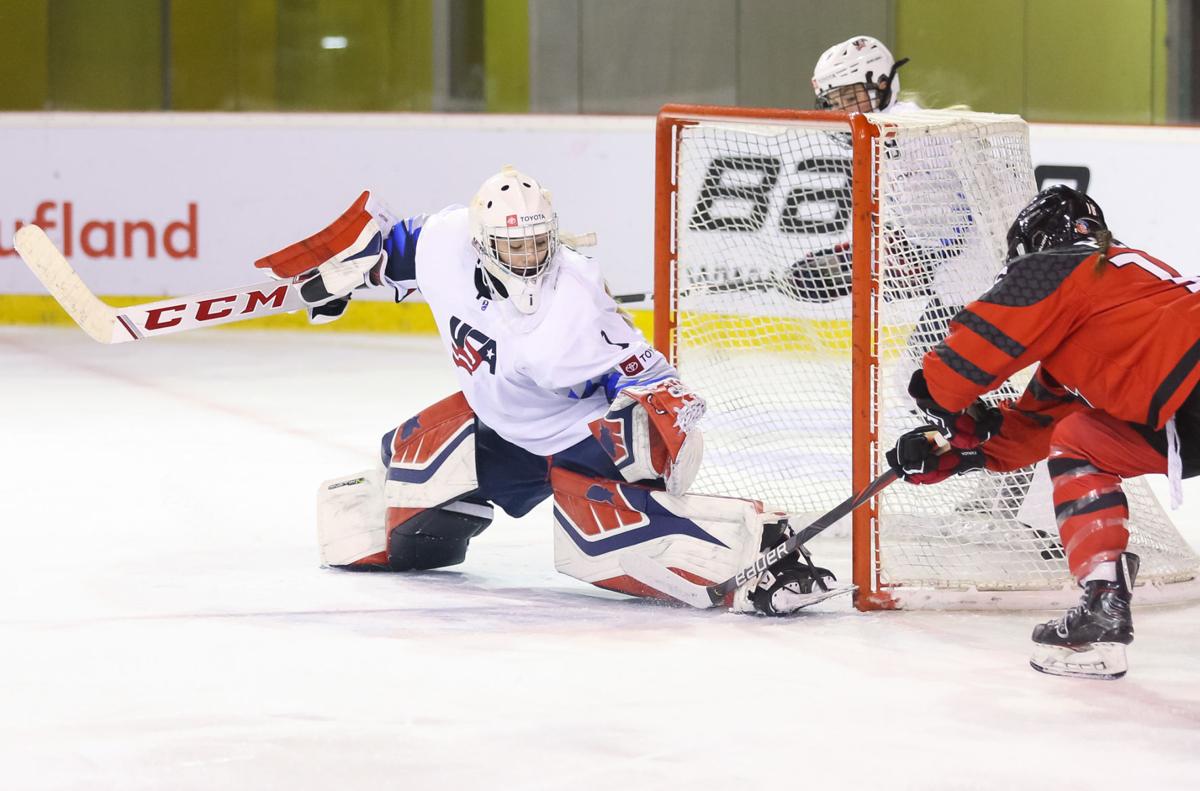 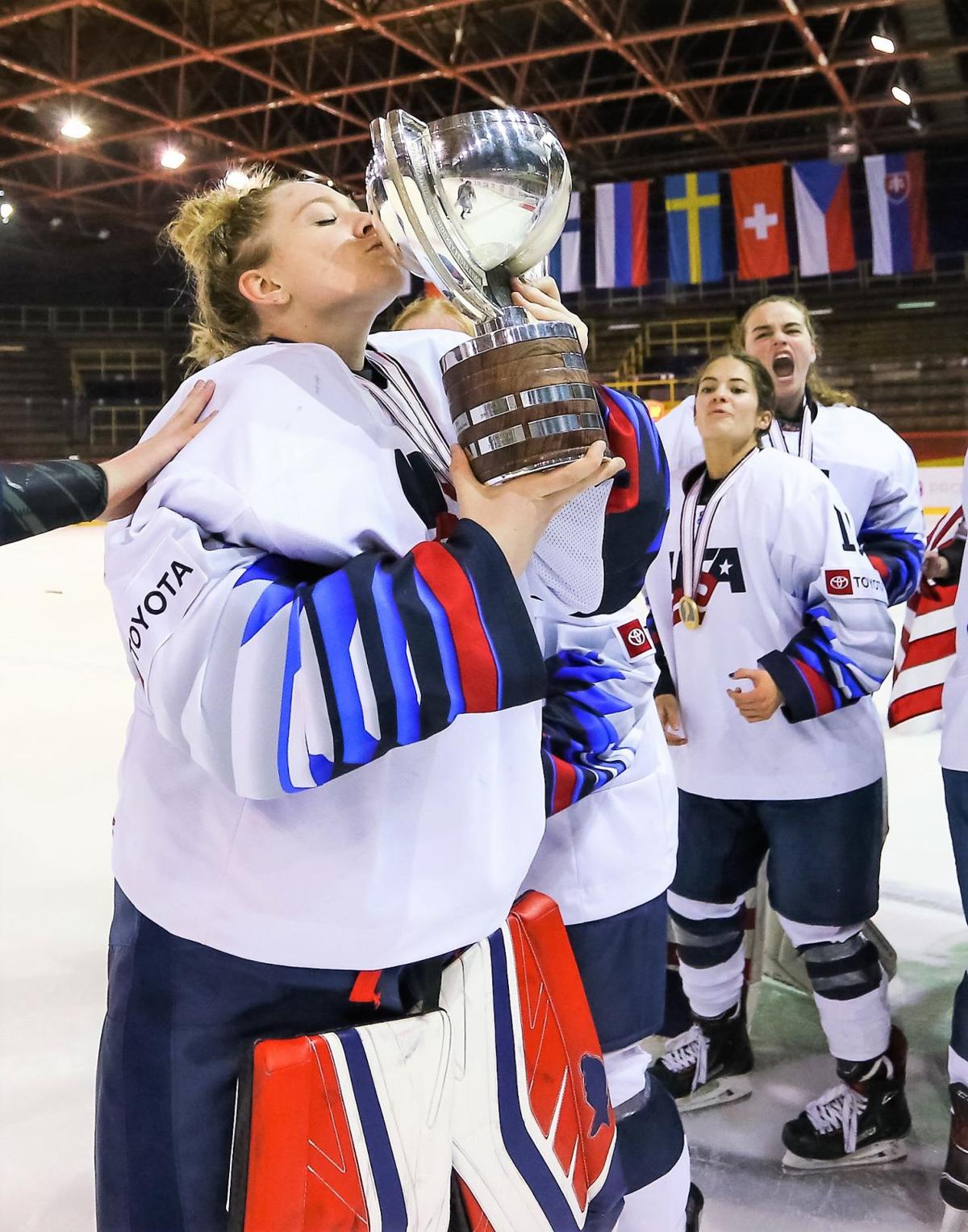 Watching the play that made her a world champion inspired all kinds of emotions for Skylar Vetter.

“I think I lost all feeling. I saw (the game-winning goal) go in and just started skating as fast as I could,” said Vetter, a Lakeville North junior and one of the goalies on the U.S. Under-18 Women’s National Hockey team. “I almost threw up because of the excitement. I had my teammates telling me to breathe. I didn’t know what to do. It was my first gold medal, and everything just kind of spaced. I was about to black out.”

Before long, however, all that was replaced by pure elation.

“Throwing your gloves up in the air, it’s the best feeling,” Vetter said.

Vetter and Farmington junior Brenna Fuhrman recently returned from Bratislava, Slovakia, where Team USA defeated Canada 2-1 in overtime in the gold-medal game of the 2020 IIHF Under-18 Women’s World Championship. The championship was the fifth in six years for the U.S., which has won gold or silver every year since the tournament was founded in 2008.

In 12 of those 13 years, the U.S. and Canada have played for the gold-medal, with the U.S. having a 7-5 record in those games. The rivalry between the U.S. and Canadian women’s programs is the biggest in women’s hockey, with nothing being a close second.

“It’s been an ongoing rivalry for a long, long time,” said Fuhrman, who was playing in her first international tournament. “Beating them was unbelievable. Everybody on our team was speechless. We all had tears in our eyes at the end of the game.”

It’s not unusual for a U.S.-Canada game to run long at the Under-18 world tourney. This year was the sixth time in tournament history the teams have had to play overtime to decide the champion. Late in the 3-on-3 overtime period, the U.S. got a 2-on-0 break and forward Kiara Zanon converted a pass from Minnetonka’s Maggie Nicholson to win the game.

Vetter made 31 saves and was named the U.S. player of the game. She also played in the 2019 gold-medal game, where the U.S. lost to Canada 3-2 in overtime. For Vetter and other returning players from the 2019 squad, that result lingered.

Canada also beat the U.S. 2-1 in a preliminary-round game of the 2020 tournament, but Vetter said that only deepened Team USA’s resolve.

“We all had that feeling from last year. We couldn’t lose,” Vetter said. “We lost the first game in the (2020) tournament against them and honestly, we were OK with it because we knew it’s hard to beat a team twice. When we got in that gold medal game we were so confident.”

Vetter was ill earlier in the tournament but played three of the five U.S. games, stopping 76 of the 80 shots she faced.

Fuhrman played all five games on defense, finishing the tournament with a plus-1 rating.

The U.S. roster includes eight players born in Minnesota and 12 who currently play hockey in Minnesota, including several at Shattuck-St. Mary’s.

Fuhrman has verbally committed to the University of Minnesota Duluth. UMD head coach Maura Crowell also has coached the last two U.S. teams at the Under-18 worlds.

“My role on the USA team was to keep the team up defensively,” Fuhrman said. “I was more of a defensive player. My role with (Farmington) is to help create offense.”

Two days after the gold-medal game at the Under-18 worlds, Fuhrman was back on the ice at Schmitz-Maki Arena, dealing with a seven-hour time change as Farmington defeated Lakeville South 3-2.

“I got back here Friday night and played Saturday,” she said. “I was a little jet-lagged, so I hydrated as much as I could and got as much sleep as I could. I got my usual amount of ice time.”

Vetter, a University of Minnesota commit, played in the 2019 Under-18 worlds as a 15-year-old.

She has spent much of her youth hockey career on boys teams, including Lakeville North’s Bantam AA team. Vetter, whose older sister Christi played Division I college hockey at Penn State, played for the Lakeville North boys junior varsity last year and is on the Panthers boys varsity this season. She has appeared in one game with the Panthers, making 21 saves in a 2-2 tie with Shakopee in mid-December.

“I love it,” Vetter said about playing boys hockey. “The speed, how competitive they are. How fast the play moves. It’s helped so much with transitioning to the top girls in the nation and the world, so it’s not really a jump for me. I know a lot of the girls who play high school say they have to speed up from high school to international. For me it’s just normal.”

Fuhrman and Vetter are eligible for the 2021 Under-18 worlds and both said they plan to take part in the selection process, which begins in the spring and includes a three-game series with Canada after Team USA selects its preliminary roster.

About half of the players on this year’s team will be too old to return to the Under-18 tourney, “so next year we’ll have a lot of brand-new kids on the team. I’m excited to see what we can do,” Vetter said.

Fuhrman said she plans to tell future teammates the memories will last a lifetime.

“Winning a world championship and then coming back home to the people who supported you the whole way, there’s nothing like it,” she said.