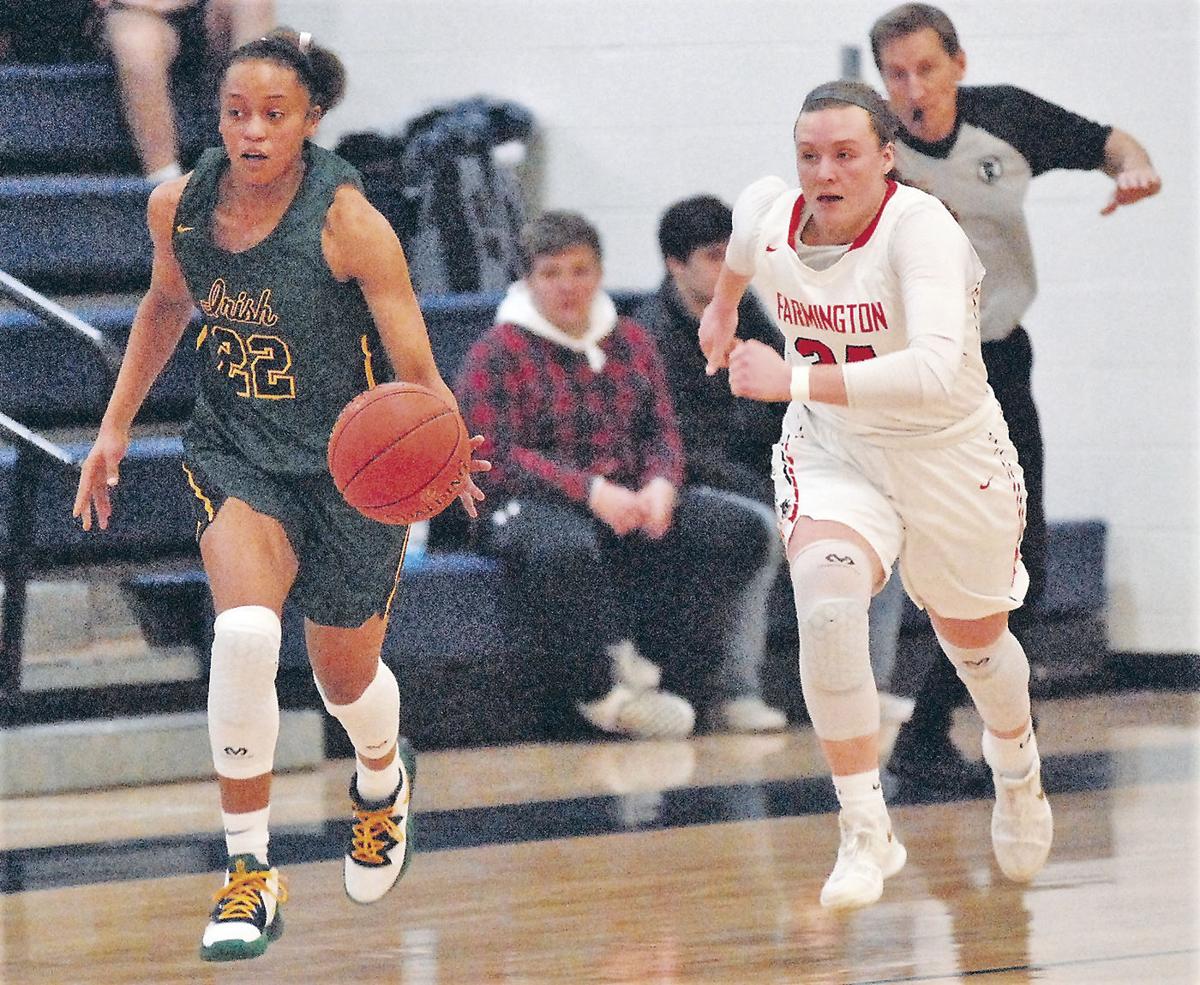 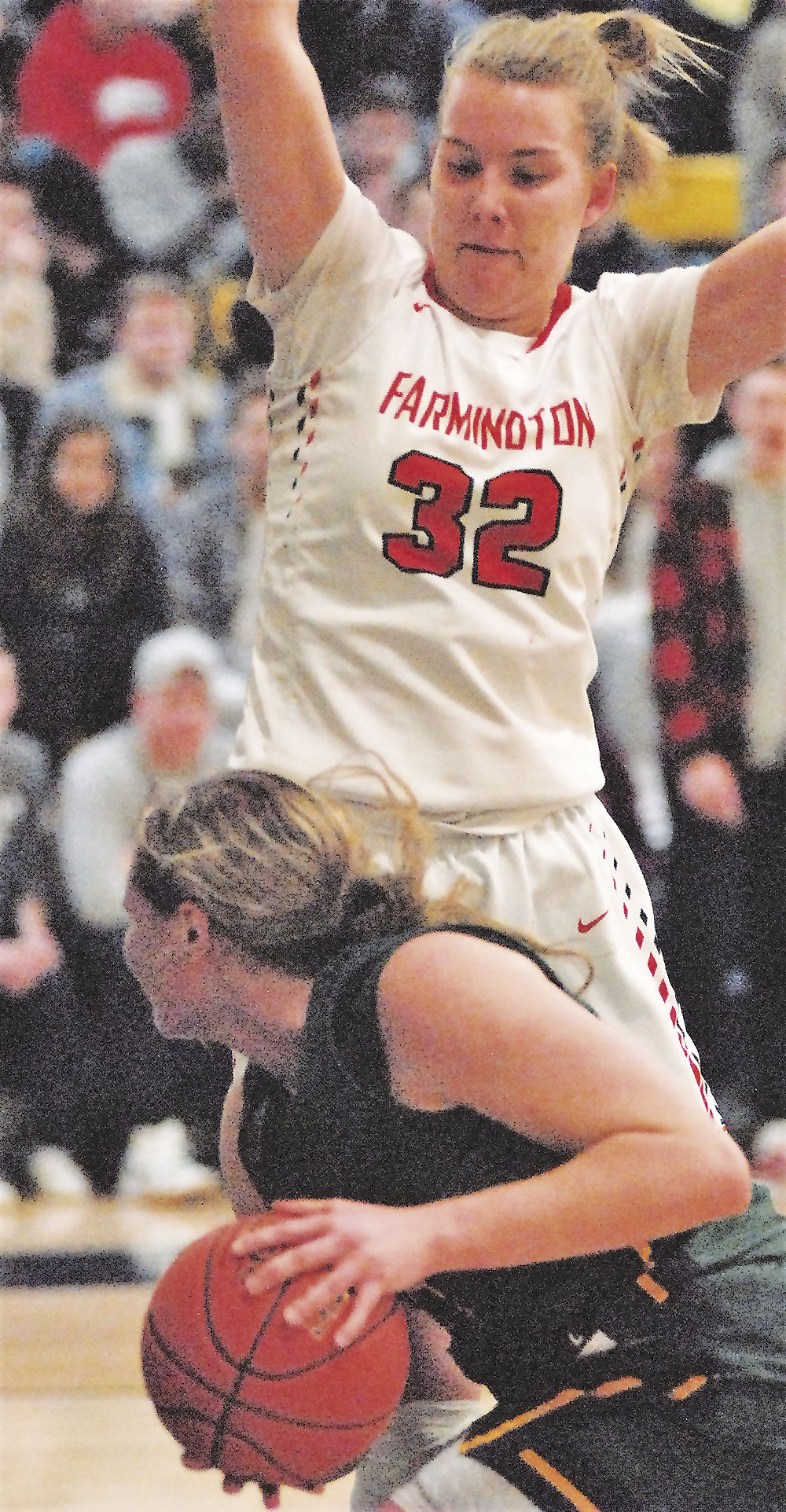 Farmington center Sophie Hart makes it difficult for Rosemount’s Helen Staley to get to the basket during last Friday’s game at Rosemount High School.

Farmington center Sophie Hart makes it difficult for Rosemount’s Helen Staley to get to the basket during last Friday’s game at Rosemount High School.

No. 6 Rosemount pulls away in second half against second-ranked Farmington

It seems appropriate the Rosemount and Farmington girls basketball teams picked last Friday to promote heart health because it was going to take heart to win the game between the highly ranked Irish and Tigers.

Rosemount’s sticky defense helped the Irish, ranked sixth in Class 4A, pull away in the second half of a 62-53 victory over second-ranked Farmington.

The victory put Rosemount (12-1 overall) in first place in the South Suburban Conference at 6-0.

Farmington was 12-2 overall and 5-1 in the league – and awaiting a rematch with the Irish on Feb. 14 at Farmington High School. Going into last Friday’s game, each team’s only loss was to unbeaten and No. 1-ranked Hopkins.

This week, Rosemount was to take on two of the three teams tied for third place in the conference, playing host to Eastview on Tuesday and going to Burnsville on Friday.

On Friday at Rosemount High, the teams took part in the Hoops for Heart fundraiser for the American Heart Association. The event, designed to raise awareness of cardiovascular health, included activities such as a halftime CPR demonstration.

It hit particularly close to home for Orr, who survived a heart attack in March 2017 while working in the Rosemount gym. Quick response by a teaching colleague, who administered CPR, and the availability of a defibrillator are credited with saving his life.

“It’s fun to see that many people come out and support girls basketball and support Hoops for Heart. Most importantly, it’s fun for the girls to get the community support and play in front of a crowd like that,” Orr said.

The Irish had to decide what shots they wanted to try to keep Farmington from taking, and they decided to swarm Farmington center Sophie Hart whenever she got the ball. The 6-foot-4 junior who's been offered a scholarship by the University of Minnesota scored eight points, and the Tigers struggled to hit shots from outside.

“Farmington has great shooters and a great post. We were surrounding that post,” Orr said. “Taking her away was No. 1 in our game plan. We wanted to force them to beat us from outside. The kids executed the game plan perfectly.”

Rosemount sophomore Tayah Leenderts had 12 points, most of them in the first half.

“Farmington pressures you and can make it very difficult for your offense,” Orr said. “We did a pretty good job of running our stuff. They have a very good post, but we think we have three very good posts, so we wanted to get the ball inside and try to find some mismatches.”

With five teams at 4-2 or better in the South Suburban going into this week, Orr said the Irish expect more difficult challenges ahead.

“We know we’re not going to blow out anybody, especially in our conference,” Orr said. “Every night, it’s about who makes the most plays down the stretch, and we were fortunate enough to be that team tonight.”

Farmington returned to action Tuesday in a conference game against Prior Lake at home. The Tigers play host to Shakopee at 7 p.m. Friday.

(Note: Corrected to clarify the recruiting status of Farmington's Sophie Hart, who has been offered a scholarship by the University of Minnesota but has not committed to a college.)