Eastview's Emma Lai hits her opening tee shot in the first round of the Class 3A, Section 3 girls golf tournament at Bunker Hills in Coon Rapids. The Lightning went on to win the team championship by 18 strokes. 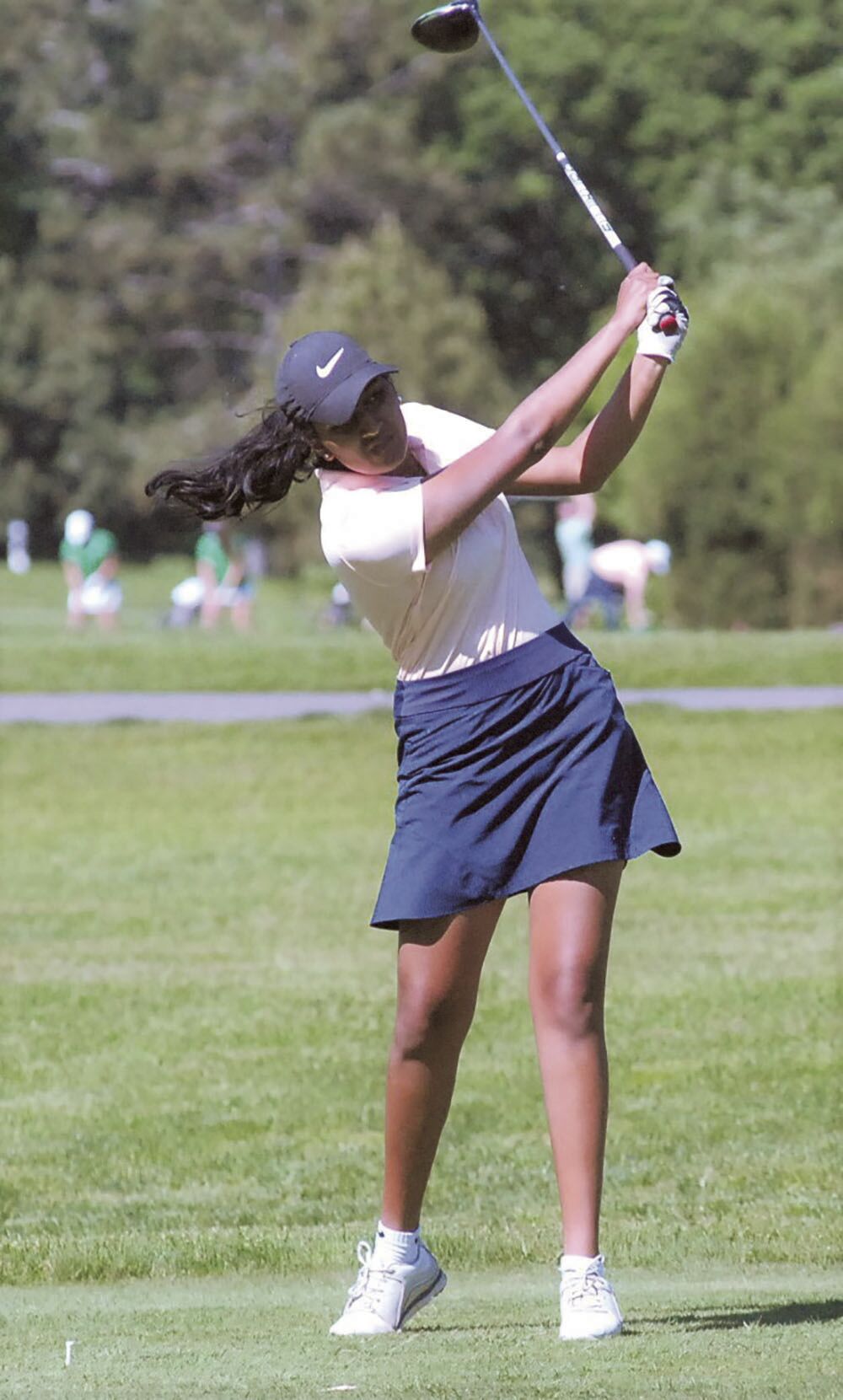 Nidhi Sunkham of Rosemount hits a tee shot during the Class 3A, Section 3 girls golf tournament at Bunker Hills in Coon Rapids.

Eastview's Emma Lai hits her opening tee shot in the first round of the Class 3A, Section 3 girls golf tournament at Bunker Hills in Coon Rapids. The Lightning went on to win the team championship by 18 strokes.

Nidhi Sunkham of Rosemount hits a tee shot during the Class 3A, Section 3 girls golf tournament at Bunker Hills in Coon Rapids.

Tension hung in the air on the second day of the Class 3A, Section 3 boys golf tournament as Eastview and East Ridge battled for the team championship.

With real-time scoring now part of the equation, anybody – coaches, parents and even players – could monitor the progress hole by hole. Eventually, Eastview won its first section championship in 10 years the old-fashioned way, by having six players stand up under the pressure.

All six of those players broke 80 in the second round as the Lightning, which trailed East Ridge by one stroke after the first round, came back in Monday’s final round to finish four in front of the Raptors at Bunker Hills Golf Course. Eastview returns to Bunker Hills in Coon Rapids for the state tournament June 15-16.

“Our depth was key for us all year and I think it was the difference in the section,” Eastview coach Mark Wanous said. “All of our guys shot in the 70s both days. That’s pretty impressive. I don’t think I’ve ever had that before in a section tournament.”

Seniors Sam Reller (74) and Teddy Kaste (76), and sophomores Joey Rohlwing (76) and Jack Hanson (77) shot the scores that counted for Eastview in the second round. Junior Gabe Tritschler added a 78 and sophomore Tyler Wanous shot 79.

In the first round Reller shot 75 and Wanous 76. Tritschler, Rohlwing, Hanson and Kaste all shot 77.

East Ridge had two players shoot 73 in the first round but couldn’t quite match Eastview’s consistency over 36 holes. It was close, though, and everybody at Bunker Hills knew it. Through the Iwanamaker.com application that’s now used for official scoring in Minnesota State High School League events, players could get up-to-the-minute scoring updates on their phones during their rounds if they wanted. The question was, would it be good for them to know?

“That’s a tough question to answer because I think it depends on the player,” Mark Wanous said. “Some are better off not looking at it at all, but other guys feed off it when they see their teammates are playing well. It’s tough for everybody on a day like Monday because there were a lot of ebbs and flows.”

Eastview finished with a 608 total through two rounds. East Ridge was at 612 and Rosemount finished third at 628. Eagan and Apple Valley made the cut for the second day of team competition and finished fifth and sixth.

This year, the Lightning have been strong when the pressure was on. Hanson had to win an intrasquad playoff that went to extra holes just to earn a spot in the section lineup.

Two years ago, Reller holed a shot from the fairway on the 18th hole of a tournament that gave the Lightning the championship. On Monday he shot 34 (2 under par) on his front nine but the round started to get away from him on the back with three bogeys and one double bogey. But on the par-4 18th he hit his approach 6 feet from the hole and made birdie as the Lightning clinched the team championship.

Mark Wanous described Reller as a player who can come up with a big shot at any time. “Teddy Kaste, our other senior captain, has been rock solid and has the best scoring average on the team,” the coach added. “They’re the glue that’s held this thing together.”

Eastview is sixth in this week’s Minnesota Golf Association all-class state rankings. Maple Grove is No. 1 and is the favorite in the state Class 3A team competition.

“It’s a really strong field this year,” Mark Wanous said. “Maple Grove, Edina and Chaska are all really good. We’ve played well at Bunker Hills, but next week we’ll need to play better than we have all year. If we do that, we’ll be up there.”

Carter Spalding of Woodbury shot 73-74–147 to win the Section 3 individual championship by one stroke over East Ridge sophomore Justin Luan. Reller was third at 75-74–149. Rohlwing and Kaste tied for sixth and Hanson finished 10th.

Eastview took a 14-stroke lead after the first round of the Class 3A, Section 3 girls tournament at Bunker Hills, which proved to be too much for anybody else to overcome in the final 18 holes. The Lightning are headed back to Coon Rapids next week for the state tournament.

The Lightning ultimately finished 18 strokes ahead of East Ridge and 33 in front of third-place Woodbury. Rosemount and Apple Valley made the cut for the second round of team play and finished fifth and sixth.

Eastview is 10th in the MGA state rankings. The top-ranked team in Section 3 going into the tournament was Simley, but the Spartans played without defending Class 3A individual champion Isabella McCauley, who competed in the U.S. Women’s Open and missed the 36-hole cut by two strokes.

It turned out McCauley’s presence probably wouldn’t have stopped Eastview’s march to the team championship. If McCauley had been available to play in the first round she would have needed to shoot 59 for Simley to tie Eastview for first place at the halfway mark.

Rosemount ninth-grader Lily Vincelli earned a spot in the state tournament by finishing fifth in the section with 82-76–158.