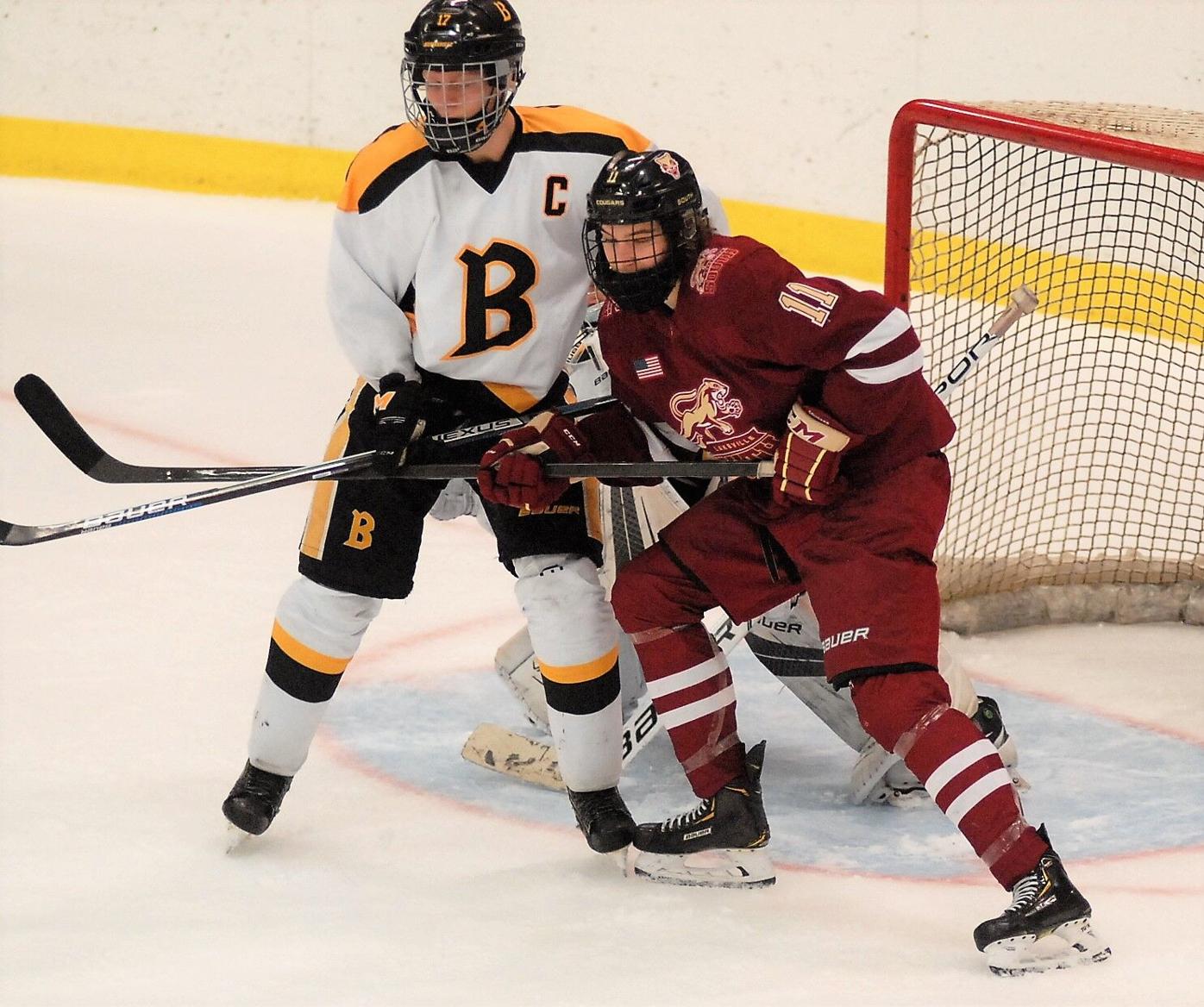 Lakeville South forward Zander Billins (11) battles for position in front of the Burnsville net during the Cougars' 10-2 victory Feb. 11. 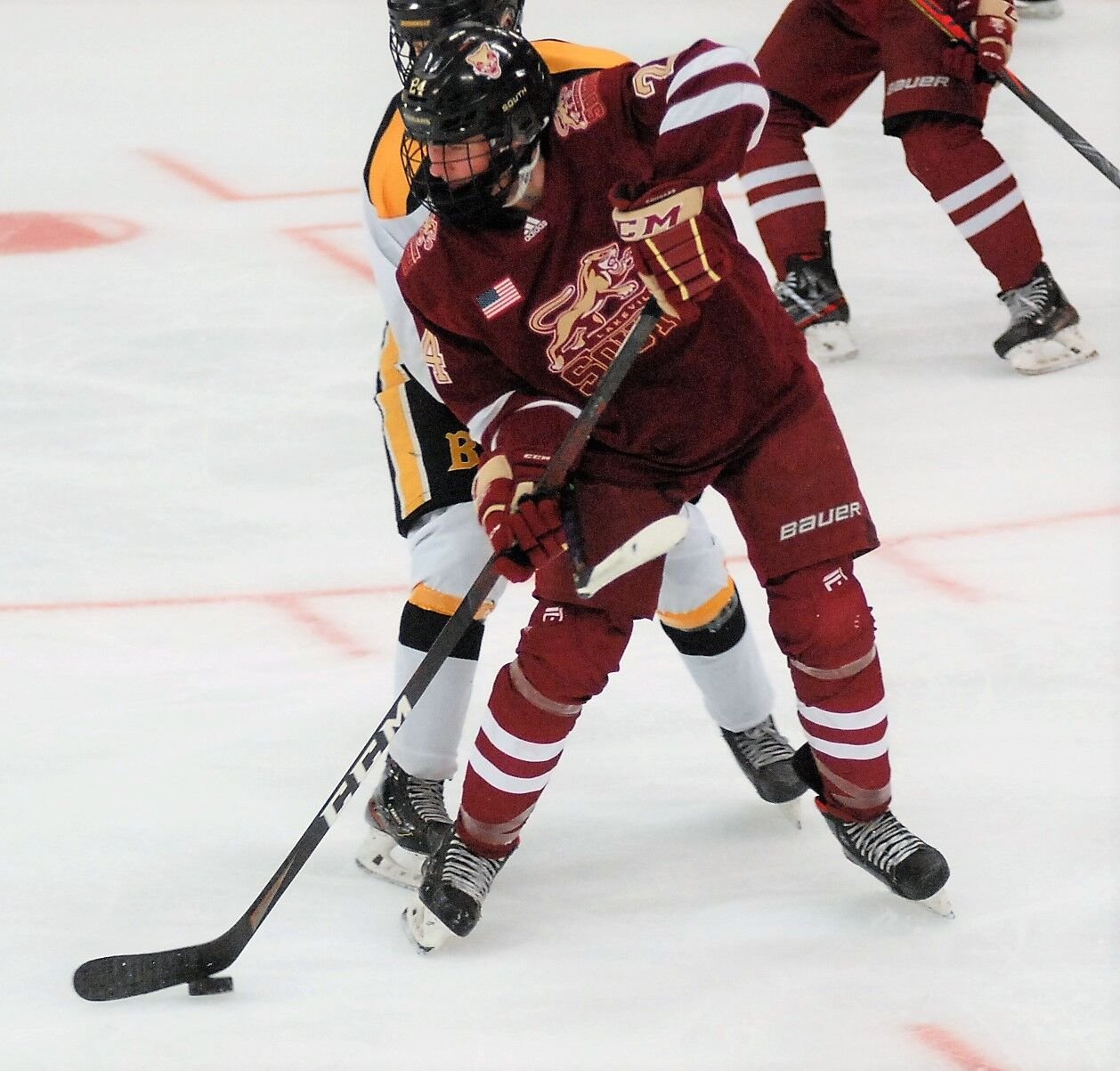 Lakeville South's Wyatt Sender handles the puck during the Cougars' victory at Burnsville on Feb. 11. South is 9-0 and leads the South Suburban Conference.

Lakeville South forward Zander Billins (11) battles for position in front of the Burnsville net during the Cougars' 10-2 victory Feb. 11.

Lakeville South's Wyatt Sender handles the puck during the Cougars' victory at Burnsville on Feb. 11. South is 9-0 and leads the South Suburban Conference.

So far the only way to prevent Lakeville South from winning is keep the Cougars from playing at all.

Because when they have been able to take the ice in a South Suburban Conference boys hockey game, they’ve been deadly. Ranked fourth in Class AA, Lakeville South is 9-0, with all the victories by at least three goals. Six of the nine games were on running time for all or part of the third period.

The Cougars’ scheduled game against Eagan on Saturday was canceled after the Wildcats had to pull out of two weeks’ worth of games. South returns to action at 7 p.m. Thursday at home against Eastview, but their game Saturday, Feb. 20, at Shakopee was called off because of COVID-19 concerns in the Shakopee program.

Unless it can schedule other games, South will go two weeks in the middle of the season playing only one time. That might be a relief to other teams, considering the Cougars have outscored opponents 58-8.

The eight seniors on the South roster have already endured numerous stops and starts to their final high school academic and athletic year. The midseason break is just one more. They’re not worried about the break derailing their momentum because, as defenseman Jacob Malinski said, “we still have a lot left to prove. We’re 9-0 but it doesn’t mean that much. We just have to keep rolling and not have any hiccups along the way.”

Lakeville South leads the South Suburban Conference. The Cougars’ closest pursuers, Prior Lake and Rosemount, have one loss each. In both cases the loss was to Lakeville South.

Winning the conference comes first, but Malinski and fellow senior Cam Boche said the Cougars also want to return to the state tournament so they can erase some unpleasant memories there. South went to state each of the last two seasons, losing to Eden Prairie in the quarterfinals each time. Last year the Cougars lost both of their games at state and did not score a goal.

“One of our goals this year was, it’s not good enough to just make it to the state tournament,” said Boche, who plays on South’s top line and leads the team with 11 goals and 24 points.

The Cougars have become one of the most explosive teams in the state, averaging 6-4 goals a game. Only one team in Class AA – top-ranked Maple Grove – is averaging more.

“Our offense is extremely powerful this year,” Malinski said. “In the past it hasn’t been but this year we have the ability to put up nine goals in a game. We scored eight goals in one period against Shakopee. That proves a lot. We haven’t had much time in the D zone, which is awesome to see.”

In the Cougars’ biggest test so far this season, a 6-3 victory over Prior Lake on Feb. 6, 13 Cougars had at least one point, Malinski said. For the season, 20 players have at least one point and that group includes goalie Cody Ticen, who has one assist.

“We’re rolling four lines, and we can put any of our lines against any line from the other team and we’ll have confidence they will do well.”

Other lines have offensive skill as well with players such as senior Jack Novak (11 assists) and sophomore Ashton Dahms (second on the team with nine goals).

The defense, as Malinski noted, hasn’t been tested as much as it might be later in the season. But “our defense is solid,” Malinski said. “Our goals-against average is point-nine, I think. We’ve made sure guys stay to the outside, and that’s what our defense is all about.”

It’s the most talented group Boche says he has played with, and the most experienced as well.

“We have a lot of returners – a lot of seniors and quite a few sophomores who played as freshmen last year,” Boche said. “We don’t have a lot of first-year players, so that experience playing varsity last year has helped a lot.”

That also helped Lakeville South have a fast start to a season that didn’t begin on time. Boche and Malinski admitted to being worried that COVID-19 would wipe out the hockey season altogether. Malinski, a defensive back for South’s football team, also dealt with that possibility in the fall. The Cougars were 8-0 when football season was halted in November because of the state-mandated pause on youth and high school athletics. Practices for winter sports were delayed but finally allowed to start Jan. 4.

“We were hoping to get this senior year with COVID happening because we knew it could be something special,” Malinski said. “At first it was a little nerve-wracking. Football, they talked about canceling that, and luckily we were able to have a season. Then they moved the date for hockey back to January.

“The biggest thing is not to take a single game off or a single shift off because you don’t know if it’s going to be your last. We could get cut short or we could make it through the entire season. Play every game with your heart on the line. That’s all I’ve ever told my teammates.”

Boche said it’s unlikely the Cougars will allow complacency to set in because they understand their state ranking and conference standing will make opponents even more anxious to beat them. As for staying sharp while waiting for the next game (Feb. 25 at Lakeville North), Malinski said the South players will have to look to each other for competition.

“It’s fun out there at practice,” he said. “It’s high-level, it’s fast. A lot of skill from a lot of different players.”