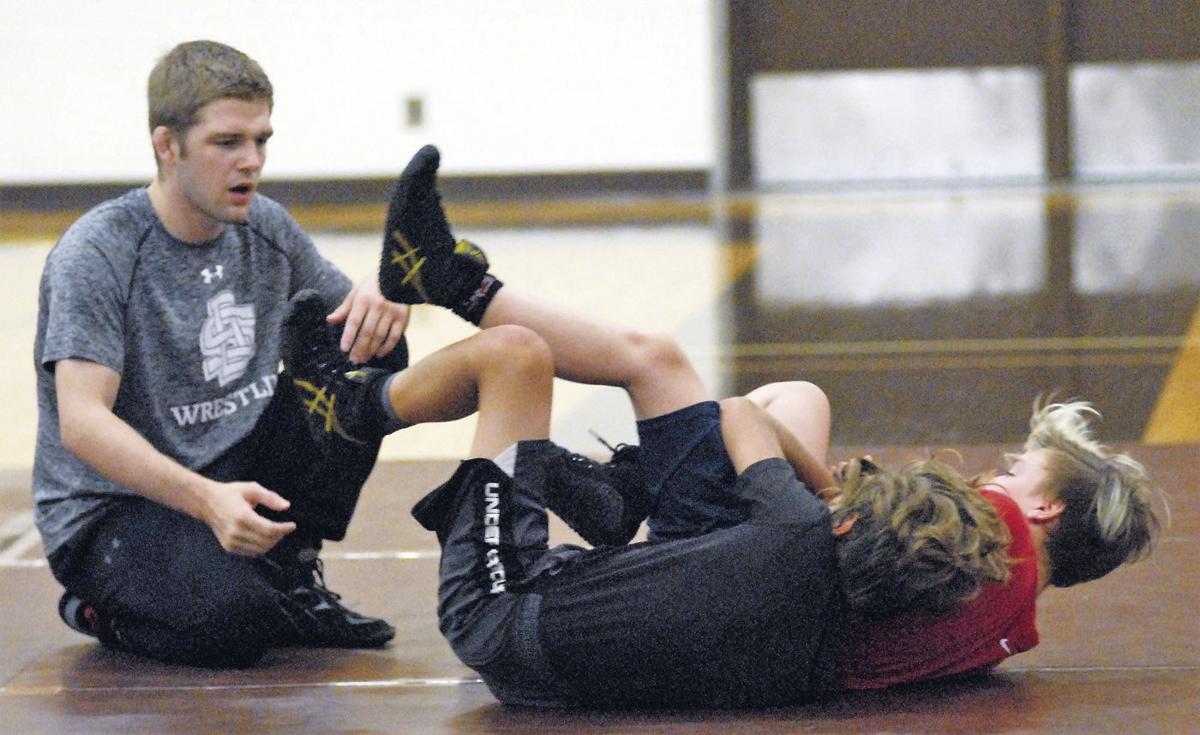 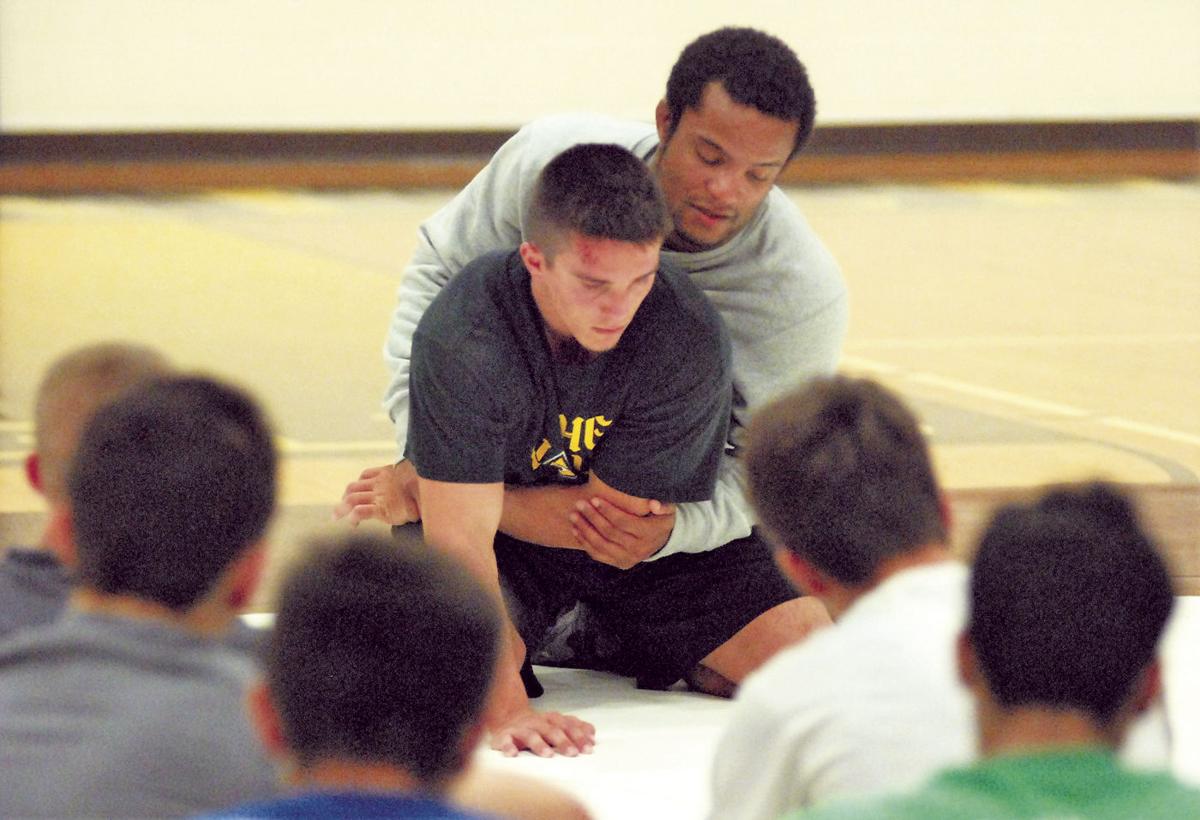 Apple Valley wrestling coach Josh Barlage knew it would be difficult to keep the attention of children, some of whom were younger than 10, through a day-long camp. So he called for help.

Highly qualified help, at that. On one of three mats at Saturday’s Camp of Champions at Apple Valley High School, an NCAA champion watched intently as two students grappled. On the next mat, another NCAA champion helped two more wrestlers sort out what to do in the referee’s position.

If anybody thought about goofing off – well, camp instructor Mark Hall wasn’t having it.

“We’ve been losing a little focus,” said the only six-time individual state high school champion in Minnesota history. “We’re going to take a water break and when we come back I’m going to need your full attention.

Coordinating schedules to get them to Apple Valley the same weekend in the summer wasn’t easy, Barlage said. Hall has been wrestling in national and international tournaments all spring and summer. Gross has been going almost nonstop since his victory in the 133-pound weight class at the NCAAs in March. He recently returned from a 2 1/2-week Athletes in Action trip to Kazakhstan and was off to Washington state and Wyoming after the stop in Apple Valley.

“It’s been a crazy, busy summer, but I love being able to travel the country for the sport of wrestling and share stuff with people,” said Gross, South Dakota State’s first NCAA Division I wrestling champion.

Skipping Apple Valley wasn’t an option. “This is where I fell in love with the sport. My brother (Brady) still wrestles here, so I’m going to come back as often as I can and go around with him,” said Gross, who was 29-1 in the 2017-18 season. “It’s fun. I know a lot of these (campers) from when I was in high school and they were 4 or 5. When I was a kid, it was crazy when I got to see a national champion. So coming back here, giving back, is something I really enjoy.”

Hall, who was 277-4 in his six years at Apple Valley, already was on the radar as a top wrestling prospect when he arrived in Minnesota. But he said this was where his career took off.

“This is the place that gave me a lot of opportunity,” Hall said. “Not to say I didn’t earn a lot of that myself by making sure I was doing the right things, but coming here, being at Apple Valley, gave me a really good chance to take my success to the national level.”

Penn State has won seven of the last eight NCAA Division I team championships, with Hall being part of the last two. Plans were for him to redshirt in 2016-17, his freshman year, but Penn State coach Cael Sanderson pulled Hall’s redshirt midway through the season. He went on to finish 31-3 and defeated No. 1-ranked Zahid Valencia of Arizona State in the 174-pound championship match.

In 2017-18, Hall was 32-1 with the only loss to Valencia in the national title match. He’s a two-time All-American. In May, he added a Pan-American Games championship to his resume.

Sanderson was a four-time national champion and 2004 Olympic gold medalist. Hall said Sanderson has helped improve his technique and conditioning, but the coach has had an even bigger influence on his attitude.

“I’m really thankful he instills the right things in us,” Hall said. “He’s helped me more outside of wrestling than he has inside of wrestling because of the kind of coach he is, his morals, and how good he wants us to have it. Obviously there’s technique (involved) and there are things I do now that I didn’t do in high school that I hadn’t learned, but ultimately it’s attitude. He helped me appreciate that I want to wrestle because it’s fun. I don’t do it because I’m supposed to be doing it.”

Gross was 63-3 his last two seasons at South Dakota State and 89-17 over three seasons. In March, he completed a championship season by defeating Steven Micic of Michigan 13-8 in the 133-pound final. Gross’ only loss was when he moved up to wrestle the nation’s top-ranked 141-pounder.

Gross, who won individual high school championships in three different weight classes at Apple Valley, said it was particularly satisfying to bring a national championship back to South Dakota State, the school that gave him a chance to reboot his life and wrestling career. Gross spent one year as a redshirt at Iowa but was one of three wrestlers dismissed from the program because of an off-campus incident. He thought he might be finished in college wrestling but sent out inquiries to other schools. Chris Bono, at the time SDSU’s head coach (he since has become head coach at Wisconsin) responded and said he would give Gross another chance, but he would have only one strike. The rest is Jackrabbits’ wrestling history.

“Being able to get that second chance and bring (the championship) back to school has been incredible,” Gross said. “Ever since I moved to South Dakota everybody there has treated me like family. There are no pro sports there, so South Dakota State is a big deal. It’s almost like you’re a celebrity in town.”

Both will go for another NCAA championship next season, and both plan to try for berths in the 2020 Olympics. Hall reached the quarterfinals in the 2016 U.S. Olympic Team Trials just months after graduating from high school. The planned redshirt that was canceled in 2016-17 might be used in 2019-20 so Hall can concentrate on making a run at the Olympics.

Gross and Hall have expressed interest in coaching after they retire as competitors, whenever that is. That didn’t surprise Barlage, who said they would be naturals as coaches.

“They’d be fantastic coaches if they decided to do that someday,” Barlage said. “The way they deal with kids and their attitude toward the sport, their ability to outwork everybody, all those things are characteristic of them. And they pass that on to the kids.”

Even though their active careers are nowhere near over, Hall and Gross have thought about what’s next.

“I want to be a coach after college, for as long as I can. That would be my best fit for a job after I’m done,” Hall said. “If I need to have a job that’s not (involved with) wrestling I’ll be able to do that because Penn State’s such a good place for school, such a good university. But I’d like to be in wrestling for as long as I possibly can. It’s in my blood.”