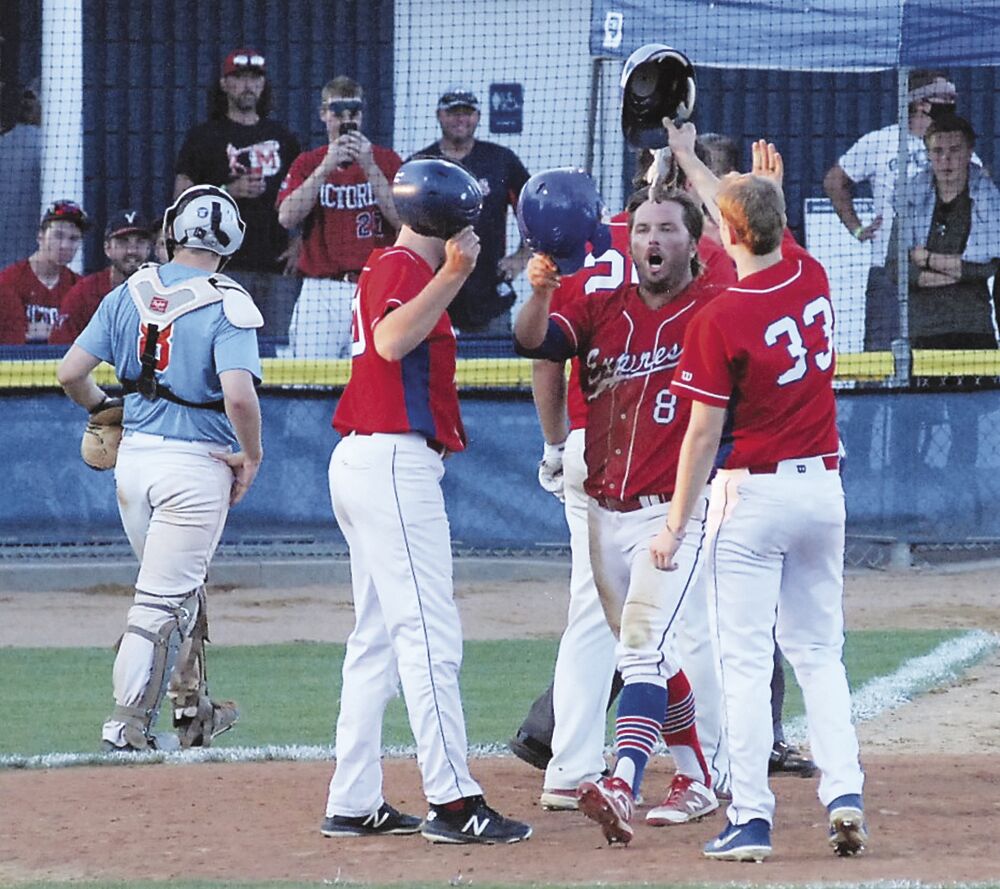 Dylan Thomas (8) is congratulated by Elko Express teammates after hitting a three-run homer in Elko's 7-6 victory over the Moorhead Mudcats in the state Class B men's baseball tournament. 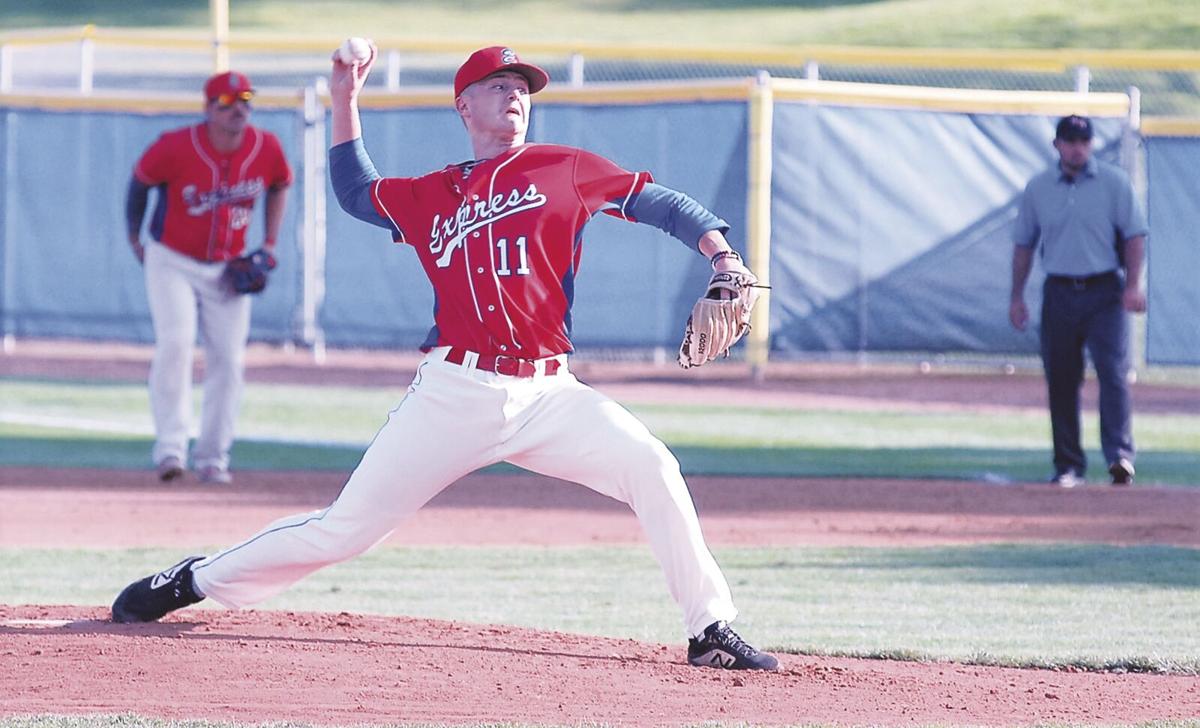 Brady Bean, a 2019 Farmington High School graduate, was the starting pitcher for the Elko Express in a Class B state tournament game against the Moorhead Mudcats on Aug. 22 in Shakopee.

Dylan Thomas (8) is congratulated by Elko Express teammates after hitting a three-run homer in Elko's 7-6 victory over the Moorhead Mudcats in the state Class B men's baseball tournament.

Brady Bean, a 2019 Farmington High School graduate, was the starting pitcher for the Elko Express in a Class B state tournament game against the Moorhead Mudcats on Aug. 22 in Shakopee.

Dylan Thomas doesn’t have to tell the young baseball athletes he coaches that he used to play.

Because he still does play.

Thomas, a Lakeville North High School standout and former Minnesota Intercollegiate Athletic Conference Player of the Year, isn’t willing to let go of his playing career yet. But he’s not just hanging on, either. On Saturday, he did a little bit of everything for the Elko Express in Minnesota Baseball Association Class B tournament. He scored his team’s first run, threw out a runner at the plate from center field, hit a three-run homer, then finished the game on the mound as the Express edged the Moorhead Mudcats 7-6 to advance to the tournament’s second round.

Baseball remains a big part of Thomas’ life, except it’s now as a coach. He’s co-owner and head coach at HTP Sports Academy in Apple Valley, one of several clubs in the south metro that is training the next generation of baseball players.

Competing is his sideline now, but it’s still important. “Not only do I love coaching, but these kids I’m close with, they now can see me play,” Thomas said. “Intertwining HTP with Elko has been a blessing because it’s all of my families coming together. They get to see that not only can I coach the game, I know what I’m doing, too.”

Thomas and HTP co-owner Chase Hentges, a former Shakopee High baseball player, met in 2014 while teammates with the St. Paul Saints. Once they decided to stop playing professionally, they opened a baseball academy. Another HTP co-owner is Jake Petricka, who has pitched in the majors with the Chicago White Sox, Toronto and Milwaukee, and is currently in the Toronto organization.

The pandemic presented difficult challenges for youth sports as organizations had to cancel events and re-make schedules on the fly. Baseball started making a return in mid-May with small-scale practices.

“We were able to start when (the Minnesota Department of Health) went up to 10 players in a group,” Thomas said. “We could go outside at Fredrickson Field (the Express’ home field in Elko), we’d be able to have two separate groups and get back in the swing of things. We’ve been able to travel, which is nice, to Wisconsin, Iowa, South Dakota, mostly the surrounding states. It’s been nice to travel, play really good quality baseball and still teach.”

Town team baseball received permission to begin its season in June. There have been a few hitches along the way - the Class B tournament moved from New Ulm to Shakopee after the New Ulm City Council refused to allow it because of pandemic-related concerns – but the teams are still playing.

So, too, is Thomas. “Love of the game, to start with,” he said. “And every single person on this team is one of my closest friends. This is my 13th year here and I’ve been playing with some of these guys like Ash Larsen the entire 13 years. I’ve been with these guys a huge part of my life, from when I was 16 until now, and I’m 29. I’m so glad Terry (Fredrickson, in his 45th year as Express manager) brought me over.”

The Express, like most teams in Class B, are loaded with players who have college baseball experience. But they also recognize the need for periodic injections of youth. The first two pitchers they used in last Saturday’s state tournament game, Brady Bean and Alex Mach, are 2019 graduates of Farmington High School. The starting shortstop against Moorhead, Carson Blasing, graduated from Farmington High in June.

“We have phenomenal pitching. We brought in a lot of young kids who stepped up,” Thomas said. “As long as we can pitch, our bats are always going to bring us there and our defense is always going to be solid.”

Elko won the 2008 state Class C tournament and finished fifth in the Class B tournament as recently as 2014. But in the Express’ last two appearances in 2017 and 2018 they were unable to get out of the first round.

“We’ve always been a fourth seed coming out of our section but this year we really brought it and got the first seed,” Thomas said. “It wasn’t an easy road. Moorhead is a tough team. We got a little lucky and got a couple of big hits in big situations.”

Trailing 3-1 in the seventh inning Saturday and facing the prospect of another first-round elimination, Elko’s offense responded. Mike Fredrickson and Blasing led off with consecutive singles. Mitch Frederick was hit by a pitch with one out, loading the bases. Lakeville North graduate Ryan Bastyr drove in a run with a sacrifice fly. Thomas then hit a line drive over the left field fence for a three-run homer. Another Lakeville North grad, T.J. Evenson, followed with a solo homer.

“The biggest thing I wanted to do was do my job,” Thomas said. “I was looking for a fastball up, just to make sure I could get the ball elevated. (Moorhead pitcher Ty Syverson) hung me a curveball and I just got a barrel on it.

“There’s something to be said about being a veteran in certain situations. T.J. and myself, we had a big-time situation with two outs and we came up with two big hits. We’ve been in those scenarios before.”

A couple of defensive misplays led to Elko squandering its three-run lead in the eighth inning, but the Express won in the bottom of the ninth when Moorhead’s right fielder appeared to lose Larsen’s fly ball in the twilight sky. It dropped for a single and allowed Frederick to score the winning run. Thomas, who worked the final 1 2/3 innings, was the winning pitcher

Elko’s next game at the Class B tournament is against the Cold Spring Springers at 4 p.m. Saturday, Aug. 29, at Tahpah Park in Shakopee. The winner will advance to the four-team, double-elimination phase of the tournament that will determine the champion. The Elko-Cold Spring winner plays Dundas or the Moorhead Brewers at 4 p.m. Sunday.

The Class B tournament continues Labor Day weekend, with the final round scheduled Sunday, Sept. 6.

St. Patrick plays Rochester in a second-round game at 2 p.m. Saturday in Milroy.