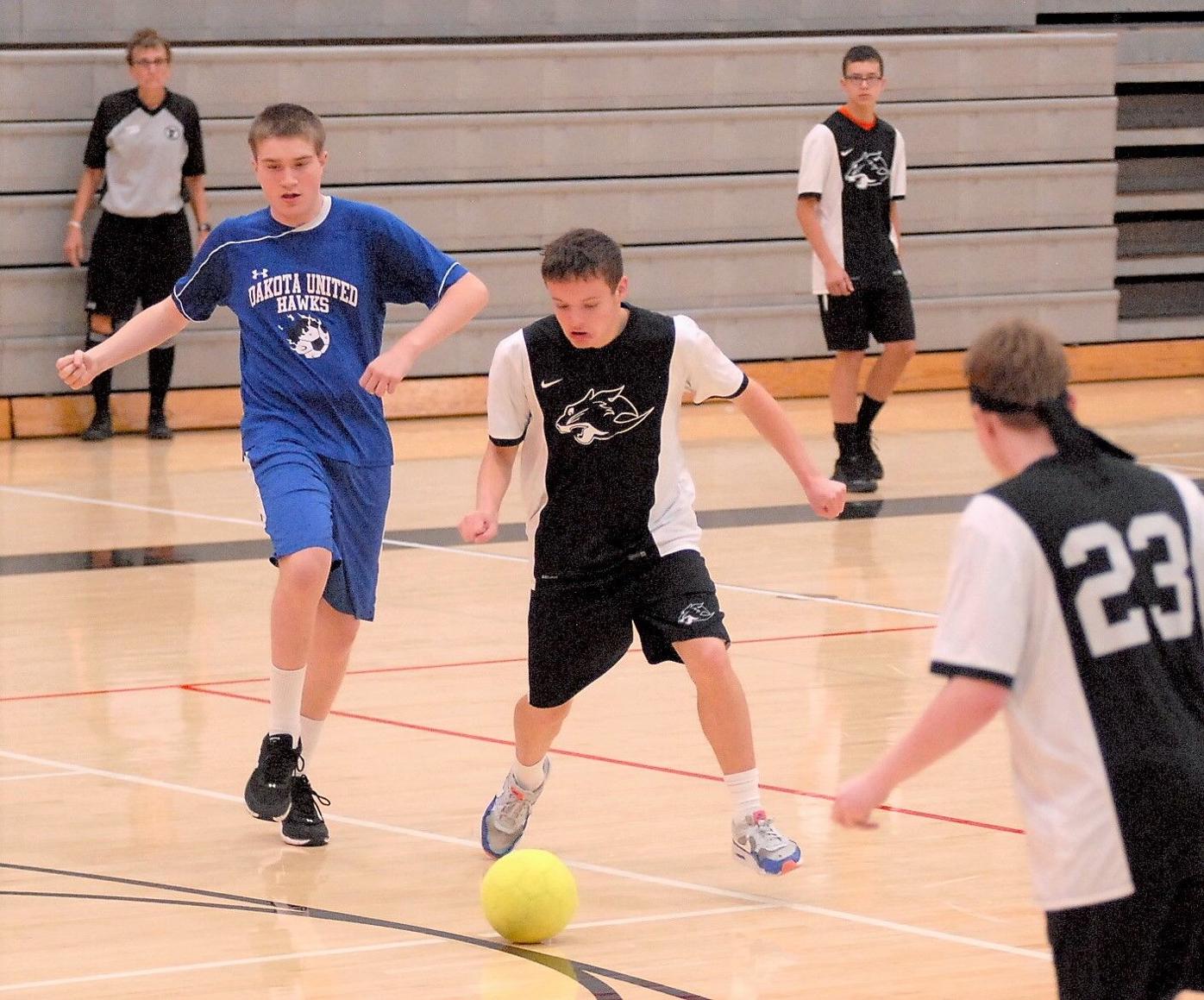 Caden Roseth of Lakeville/Burnsville/Farmington takes a shot at the Dakota United goal during the state adapted soccer CI Division championship game Nov. 20. Roseth scored 26 goals in three games in the state tournament, including four in the Blazing Cats' 6-3 victory over Dakota United in the final. 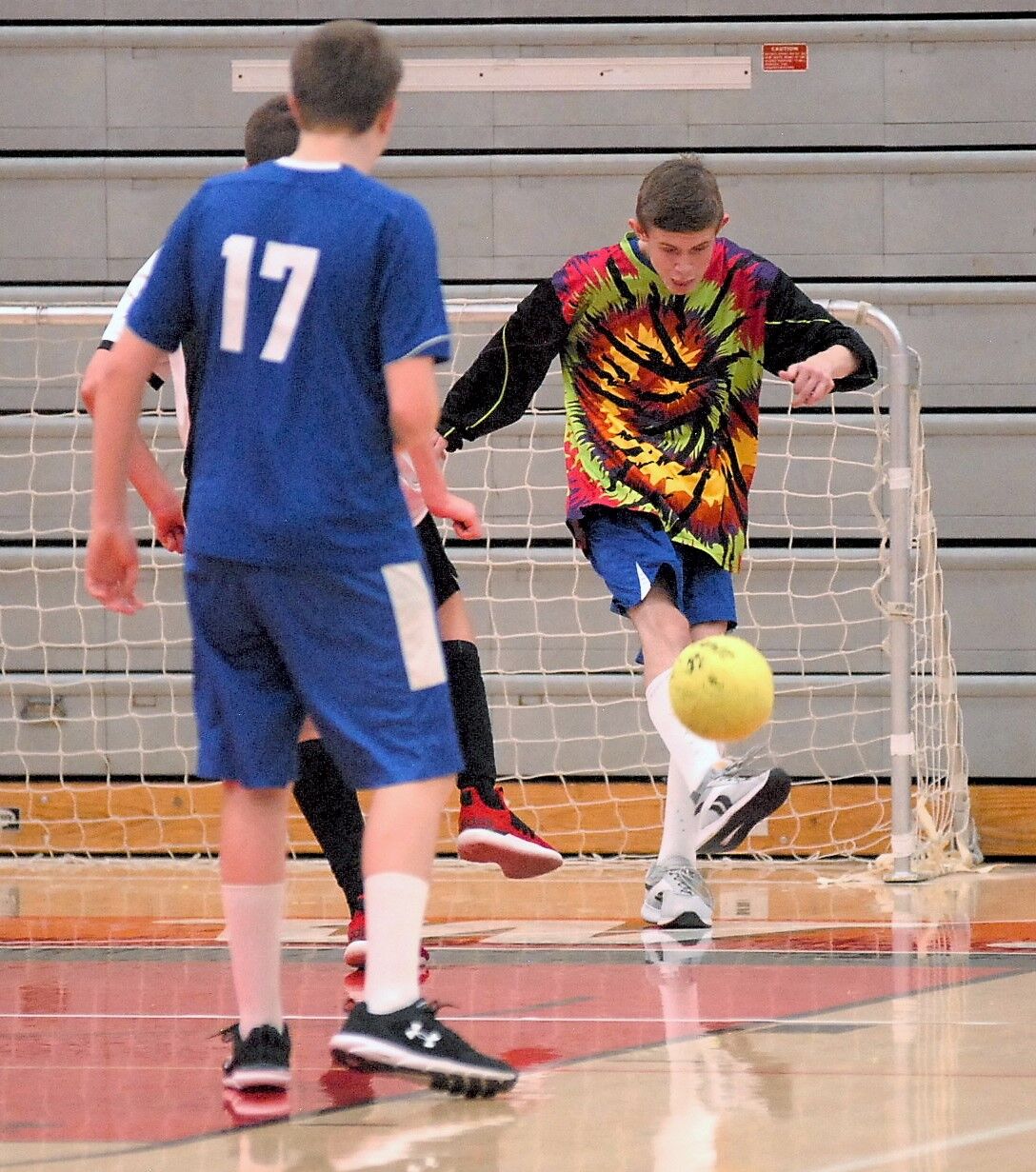 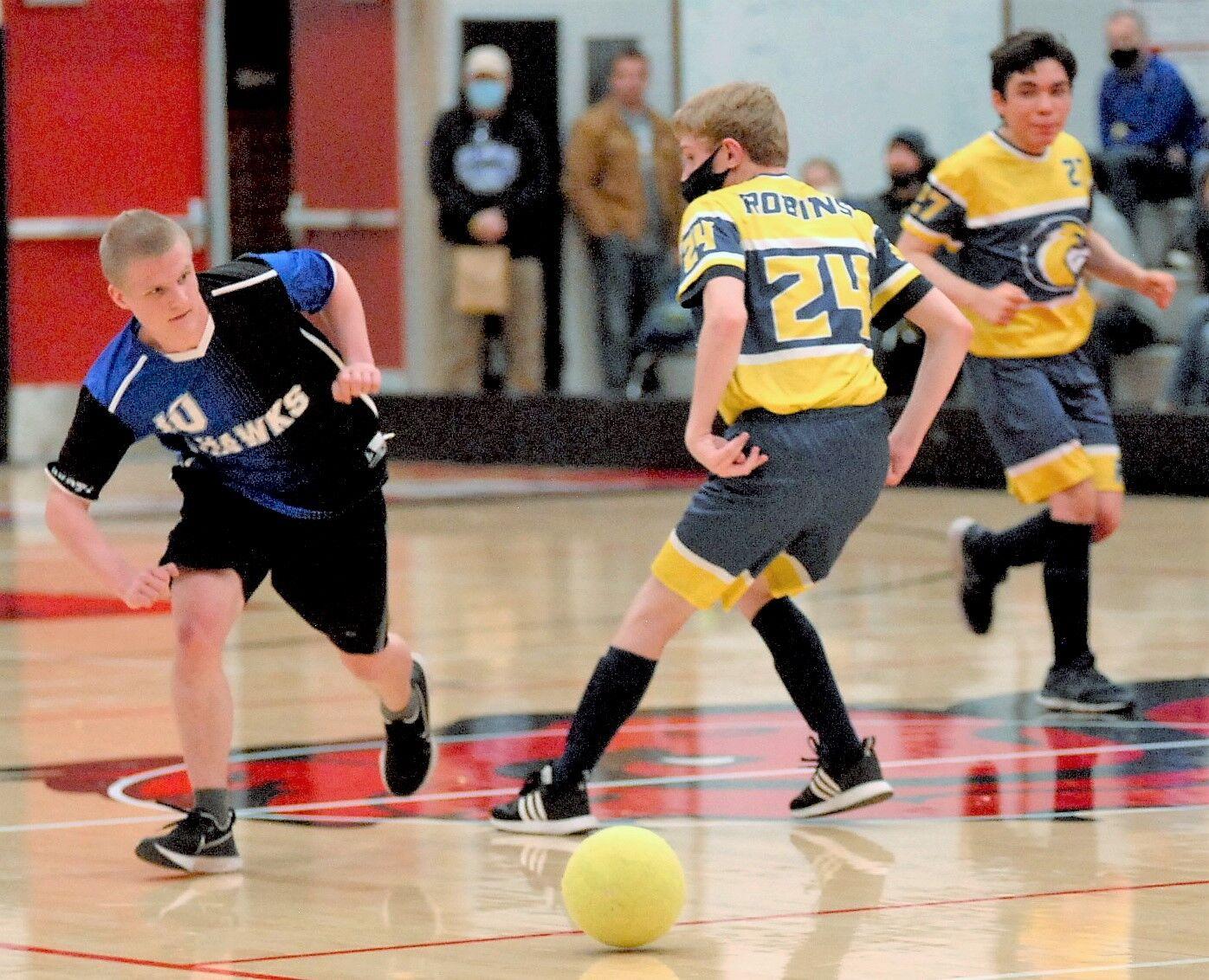 Caden Roseth of Lakeville/Burnsville/Farmington takes a shot at the Dakota United goal during the state adapted soccer CI Division championship game Nov. 20. Roseth scored 26 goals in three games in the state tournament, including four in the Blazing Cats' 6-3 victory over Dakota United in the final.

The state adapted soccer tournament’s return was met enthusiastically by all 14 teams that played in last weekend’s tournament at Stillwater High School.

The response of the Dakota United CI Division players was typical. “We got here on Friday and the kids were shell-shocked,” coach Brett Kosidowski said. “I think 10 of the 16 had never been to a state tournament before. They’re like, there’s so many people here. There’s swag we can buy. There’s big crowds, a big stage. This is awesome. This is what it’s all about. It all built up to this moment.”

While state tournaments for other sports returned by March 2021, following what was believed to be the worst of the pandemic, adapted state tournaments weren’t staged in 2020-21 out of concern for the athletes’ health. Teams were allowed a limited amount of practices, but there were no soccer or floor hockey seasons. In the spring an adapted softball regular season took place but there was no state tournament.

It was important for players to get together, but something was missing – the opportunity to compete. Dakota United CI Division coach Lorrie Buecksler was asked how long it took her players to return to competition mode.

“About two minutes,” she said. “They are competitors. They love to play, love to play tough and love to put some points up on the scoreboard.”

The Blazing Cats were indisputably the best team in the CI Division during the regular season. Nothing changed in the state tournament, when they swept past three opponents to win the program’s first soccer championship since 2013.

Lakeville/Burnsville/Farmington (9-0) won seven of its nine games by at least nine goals. The only team capable of keeping it close was Dakota United, which fell to the Blazing Cats 6-3 in the state championship game. The Blazing Cats also beat the Hawks 5-1 in the regular season.

It’s fair to say Blazing Cats sophomore Caden Roseth has leaned into his role as the team’s scoring leader. “He wants to score. That’s all he cares about, and he’s good at it,” coach Shawn Tatge said.

How good? Roseth scored 26 goals in three state tournament games, including 11 in the first round against Stillwater and 11 more in the semifinals against the Southern Stars, a co-op that includes Chaska, Chanhassen, Shakopee and Prior Lake High Schools. Dakota United managed to hold Roseth to four goals in the final.

“There are times I play goalie during practice,” Tatge said. “He shoots it low in the corners and it’s tough to make a save. He’s a pure goal scorer in every sense.”

Based on what the Blazing Cats had returning from the 2019 season, Tatge said he knew the team would be talented.

“I also knew I had some gaps to fill, and we had some seventh- and eighth-graders step up and do well,” he said. “I had a couple of new players step up who hadn’t played a lot of soccer. We had some JV players who were able to move up to the varsity.”

The core group also plays floor hockey and softball and could be in the mix for state championships in those sports. But Tatge doesn’t want the players getting ahead of themselves, noting it had been eight years between championships in soccer.

Having the state tournament canceled in 2020 hit Dakota United hard, as Kosidowski said he had a group capable of winning the CI championship.

“Last year we had an explosive group of seniors. We had seven seniors that would have been fighting for the state championship and it just wasn’t meant to be,” he said. “But the way they played in practice and took that season with grace, it motivated the kids we have this year to be their best.”

Myles Johnson, Mark Manwarren and Thomas Christopherson scored against Lakeville/Burnsville/Farmington. The Hawks’ star of the championship game probably was goalie Kyle Jacobson, who made 25 saves.

“They’re really good at keeping the ball in the offensive zone. Watching the game we could see the ball was down in our defensive zone too much,” Kosidowski said. “Our goaltending in that game and our defense in the first half, I was really impressed with it.”

The Hawks finished 9-2-1, with both losses to the Blazing Cats and the tie coming against the Southern Stars during the regular season. They beat 2019 state champion South Washington County 5-2 in the first round, with Manwarren scoring a hat trick. Manwarren scored five more in the Hawks’ 6-4 victory over Park Center in the semifinals.

Only two players on the Dakota United roster are seniors. “This is a great group of kids,” Kosidowski said. “A good mix of juniors, sophomores and freshmen. We’ll get this group back.”

Dakota United and Robbinsdale/Hopkins/Mound Westonka have frequently battled for PI Division adapted sports championships, often against each other. It was no surprise that the 2021 soccer tournament was another page from the same script.

With the number of PI Division programs down this year, the state tournament field was limited to six. Of the six, only the Hawks and Robins had winning records. Both teams were undefeated. A meeting in the championship game seemed inevitable.

The Robins scored three consecutive goals in the first period to take the lead in the Nov. 20 championship game and went on to win 7-5, taking their first PI Division soccer title since 2014. It was the fourth consecutive appearance in the final for Dakota United, which won in 2017 and 2019.

Forwards Fiona Sitzmann and Sam Gerten tried to spark a rally for Dakota United, with Sitzmann scoring three goals and Gerten two. Gerten also had assists on all three of Sitzmann’s goals. But it wasn’t quite enough.

“The state tournament is exciting for every kid on this team, but there are a few out there that leave every emotion, their hearts, on the floor,” Buecksler said. “It’s a tough loss, but it’s always a tough game. It’s never a walk in the park against Robbinsdale.

“Our team loves being here. They’re pretty competitive. They love to win but they know being here at the end with the red (ribbon, for second place) is pretty good, too.”

Dakota United received a first-round bye at the state tournament and defeated Rochester 18-4 in the semifinals as Gerten scored 13 goals. He had less room to maneuver in the championship game as the Robins frequently marked him with two players.

Gerten, Sitzmann and senior defender Alex Jorgenson were named to the all-tournament team. Gerten and Jorgenson are the Hawks’ only seniors.

Buecksler said it wasn’t a sure thing the Hawks would have a PI soccer team this fall because of low numbers. “We had 10, which is the lowest number we’ve had in a really long time,” she said. “I’m not sure if COVID was a factor or if it was just a lull, but they were 10 awesome kids who made the season fantastic for us as coaches.”