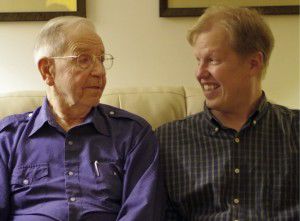 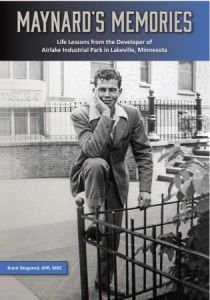 Initially, Brant Skogrand had simply wanted to learn more about his grandfather.

“When I was a boy, my grandpa seemed larger than life,” said Skogrand of Apple Valley, who serves as chief communications officer with Skogrand PR Solutions.

“Throughout the years, I heard about my grandpa’s successes. … I knew that he was a big deal in some respects. I decided to find out what contributed to his success and discovered life lessons that could apply to anyone.”

A native of the small rural community of Dawson, Minn., Johnson opted for a business career rather than a life of farming. As vice president and general manager of Hitchcock Industries in the mid-1960s, Johnson became the driving force behind development of Airlake Industrial Park after Hitchcock bought 1,600 hundreds acres of land in Lakeville.

“It was really a visionary project,” Skogrand said. “And he was in charge as the developer behind it.”

In addition to his role in developing the industrial park, Johnson was instrumental in starting Lakeville’s annual Pan-O-Prog festival, Skogrand said, and Johnson was recognized in 1983 when he was named grand marshal of the Pan-O-Prog parade. In 1997, he received the Business Person of the Year Award from the Lakeville Area Chamber of Commerce.

In his talks with his grandfather, who now lives in Bloomington, Skogrand said the most striking element was the life lessons that came across. As he sat down to write the book, these became the focus.

“Be there when your parents need you” was one of the lessons that resonated the most.

“He put off his business dreams in college when his dad became ill and couldn’t run the farm, and he ran the farm for a year,” Skogrand said. “Then during World War II, he served in the Pacific, before going on to a flourishing business career.”

“Maynard’s Memories,” which is available on Amazon, is Skogrand’s third book. He’s also the author of “19 Tips for Successful Public Relations” and “From Fringe Party to Serious Contender,” an analysis of the Green Party in Minnesota.