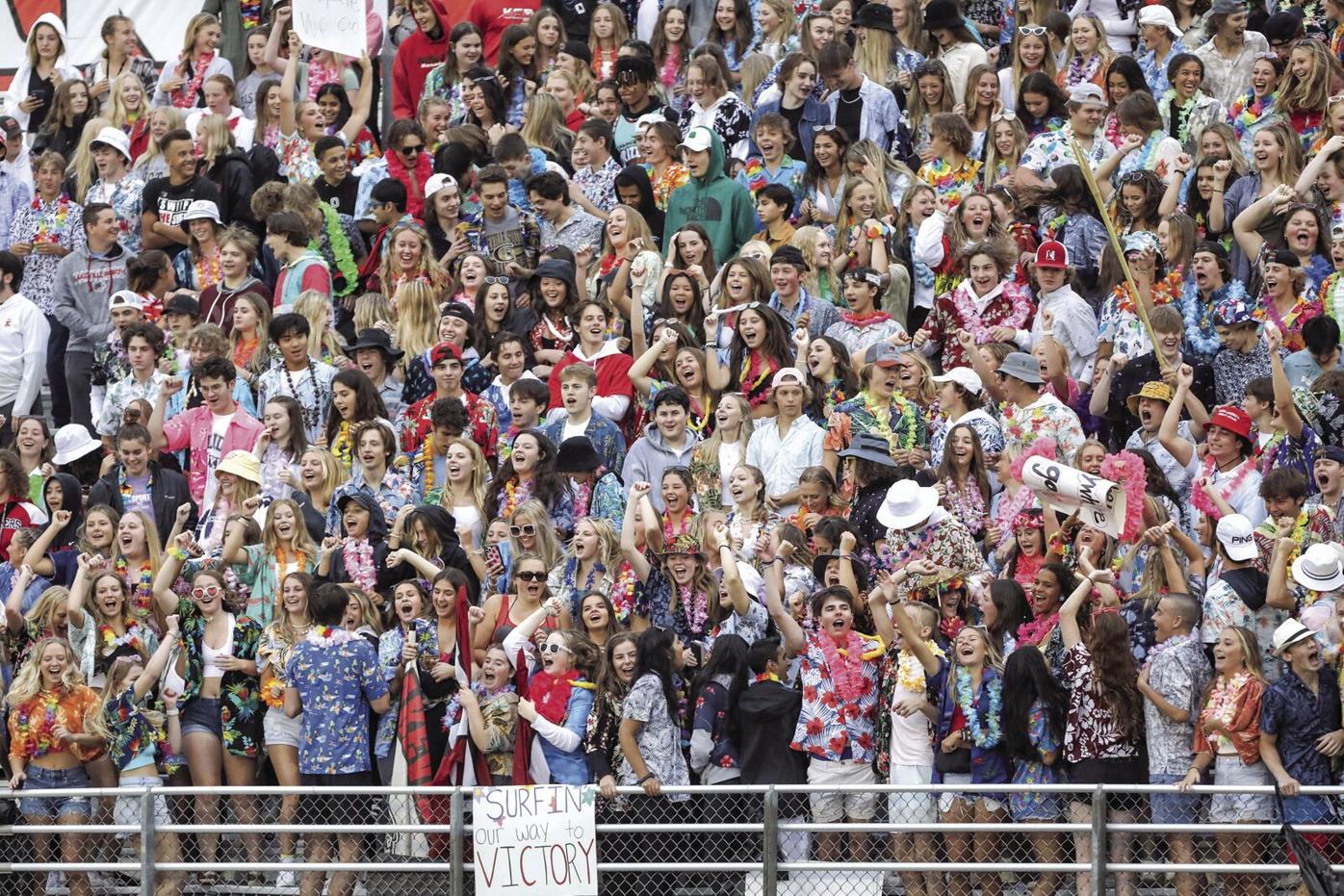 High school football is back - and so are student sections such as this one at Lakeville North High School for the Panthers' season opener Sept. 2. 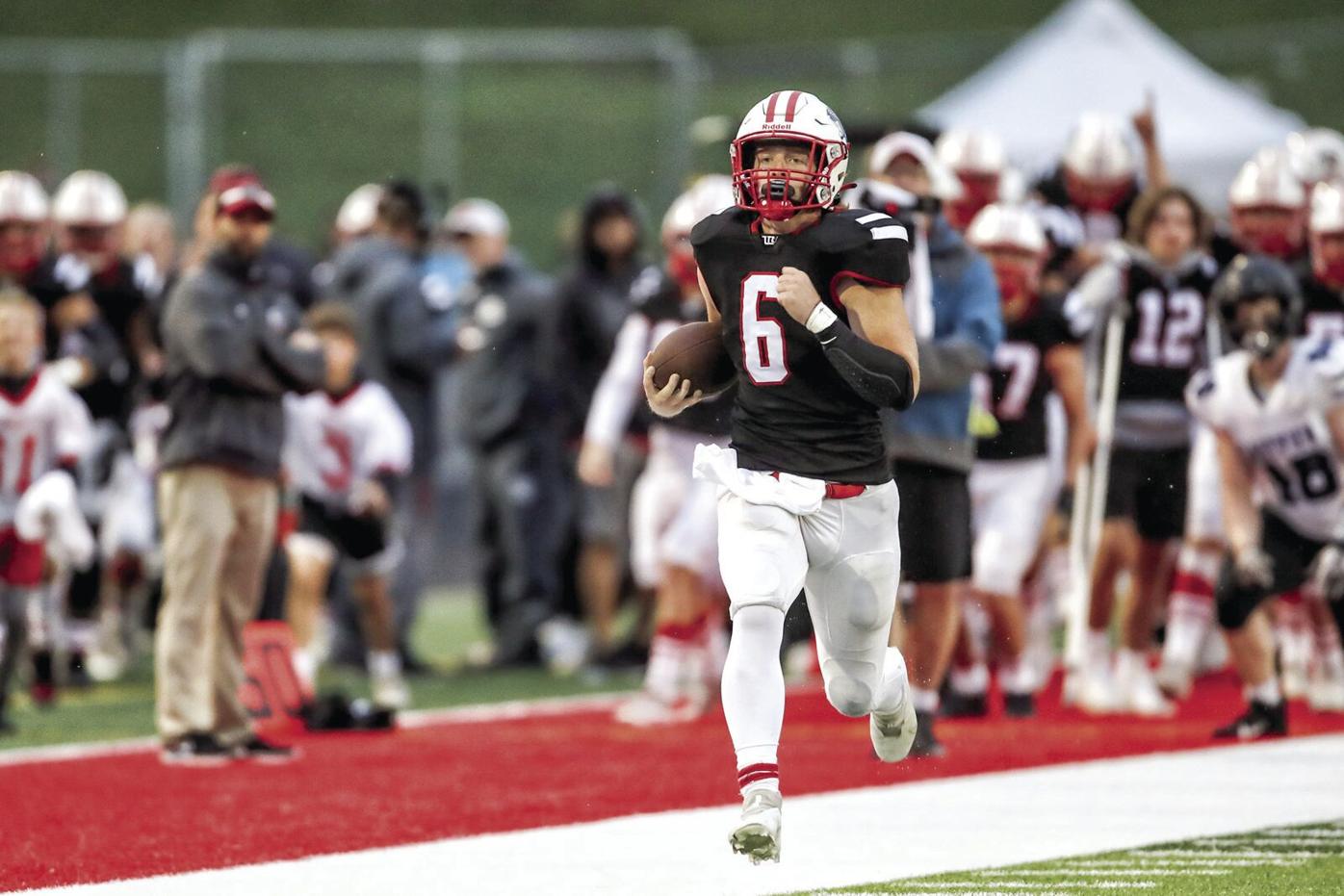 Lakeville North quarterback Jackson Hanson is on his way to the end zone on an 85-yard touchdown run in the second quarter of the Panthers' game against Eastview on Sept. 2.

High school football is back - and so are student sections such as this one at Lakeville North High School for the Panthers' season opener Sept. 2.

Lakeville North quarterback Jackson Hanson is on his way to the end zone on an 85-yard touchdown run in the second quarter of the Panthers' game against Eastview on Sept. 2.

Lopsided scores were commonplace during the first week of the high school Class 6A football season.

In the off-season, the Minnesota State High School League shook up regular-season district assignments in the largest enrollment class, assigning most of the teams that have had winning records recently to the Gold Division, with most of the programs trying to build going to the Maroon Division.

Teams will play within their own division most of the season, but the opening week featured a number of “crossover” games. On Sept. 3-4 there were 14 Class 6A games featuring a Gold Division team playing a Maroon Division team. Gold Division teams won 11 of the 14, many by wide margins.

Victorious Maroon teams were Stillwater, which defeated Centennial 7-0; Mounds View, a 31-10 winner over Totino-Grace; and Woodbury, which rallied to beat Champlin Park 15-9.

Lakeville South, which went 8-0 last season and was one of three unbeaten teams in 6A, introduced Park of Cottage Grove to its new class with a 50-14 victory Sept. 3. This is Park’s first season in Class 6A after moving up from 5A.

The Cougars’ Power-T offense remains a mystery to opponents. South picked up where it left off last season, rushing for 447 yards. Carson Hansen rushed for 213 yards and three touchdowns, and also caught a touchdown pass from Camden Dean. Ian Segna had a 79-yard touchdown run.

Park had almost 300 yards of offense and scored early in the third quarter to cut South’s lead to 29-14. But the Cougars pulled away on two touchdown runs by Hansen, one of 72 yards, and a 6-yard pass from backup quarterback Jacob Royce to Luke Meyer.

Lakeville South visits Lakeville North at 7 p.m. Friday, Sept. 10. With COVID-related restrictions on attendance being eased, the game is expected to draw a full house to North’s stadium.

Lakeville North defeated Lakeville South twice during its 2018 state championship season, including a victory in the Class 6A semifinals. South defeated North in regular-season games in 2019 and 2020 by scores of 34-19 and 35-15.

The Tigers broke out to a 28-0 halftime lead en route to winning their season opener.

Burnsville’s scores came in the second half on touchdown passes from Sterling Brown Jr. to Jay Homuth covering 25 and 29 yards.

Farmington’s home opener on Friday, Sept. 10, could be one of the biggest home games in school history as the team welcomes 12-time state champion Eden Prairie to Tiger Stadium for a 7 p.m. kickoff. Eden Prairie was one of three Class 6A teams to finish undefeated in the pandemic-shortened 2020 season and opened its 2021 season by walloping East Ridge 46-0.

Burnsville plays at home against Hopkins in a Maroon District game at 7 p.m. Friday. Hopkins is coming off a 49-0 loss to Prior Lake in Week 1.

The Irish broke a 7-7 tie with three second-quarter touchdown and ended up scoring the last six touchdowns of the Sept. 3 game.

Touchdown runs of 74 and 10 yards by Pyne in the second quarter put the Irish ahead to stay. Pyne threw a 24-yard pass to Wall for a score in the third quarter, and Irish closed it out with a 19-yard touchdown run by Will Priest.

Eagan quarterback Alex Lachenmayer scored on a 3-yard run in the first quarter. Lachenmayer had to leave the game in the second quarter because of a shoulder injury and was replaced by Landon Tonsager.

Eagan plays Park of Cottage Grove in its home opener at 7 p.m. Friday, Sept. 10, at Wildcat Stadium. Park, which moved from Class 5A to 6A this season, lost to Lakeville South 50-14 in its opening game last week.

Rosemount travels to Edina for a 7 p.m. Friday kickoff at Kuhlman Stadium. The Hornets were held to 57 yards rushing in a 30-7 loss to Minnetonka last week.

Senior Gavyn Schraufnagel rushed for 219 yards and a touchdown as Lakeville North won its opener.

The Panthers rumbled for 420 yards on the ground and attempted only four passes, completing one. Quarterback Jackson Hanson rushed for 146 yards in his first varsity start, with much of it coming on an 85-yard run in the second quarter that gave North a 7-0 lead.

Eastview, which was winless in 2020, kept the score at 7-0 until Schraufnagel scored on a 5-yard run with 2 minutes, 4 seconds left in the third quarter. Hanson scored on a 2-yard run in the fourth quarter.

Lakeville North is home against Lakeville South at 7 p.m. Friday, Sept. 10, in an early Class 6A showdown. The Panthers will try for their first victory against their crosstown archrival since 2018.

Eastview faces Woodbury in a Maroon South subdistrict game at 7 p.m. Friday. It’s Eastview’s home game but will be played at Rosemount High School because of continuing renovations at Lightning Stadium.

The Eagles struggled out of the gate in the 2021 season opener Sept. 3. Apple Valley had trouble moving the ball consistently and did not score until the final two minutes of the game on quarterback Timothy Wyandt’s 62-yard run.

Mahtomedi, which was 5-1 last season, led the visiting Eagles 24-0 at halftime.

Apple Valley goes for its first victory of 2021 when it plays at Hastings at 7 p.m. Thursday, Sept. 9. Hastings lost 23-6 at Chanhassen in its opener Sept. 2.