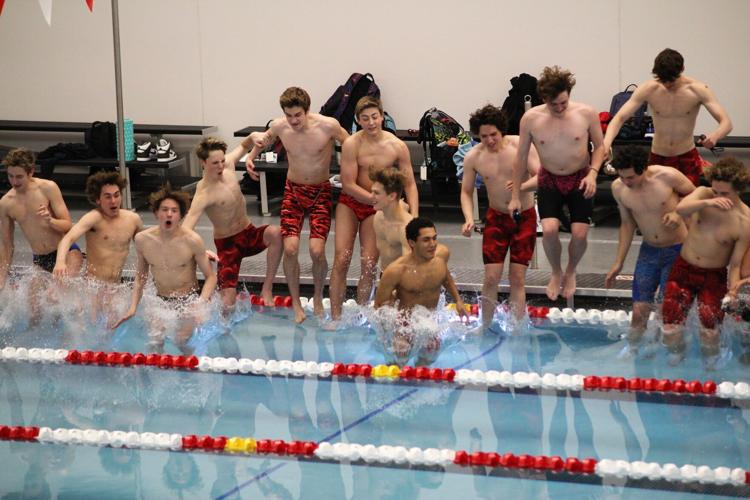 Lakeville North and Lakeville South high schools' swimmers and divers were the first to jump into the new pool at the Lakeville Area Schools Blanchard Aquatic Center during a Wednesday open house. 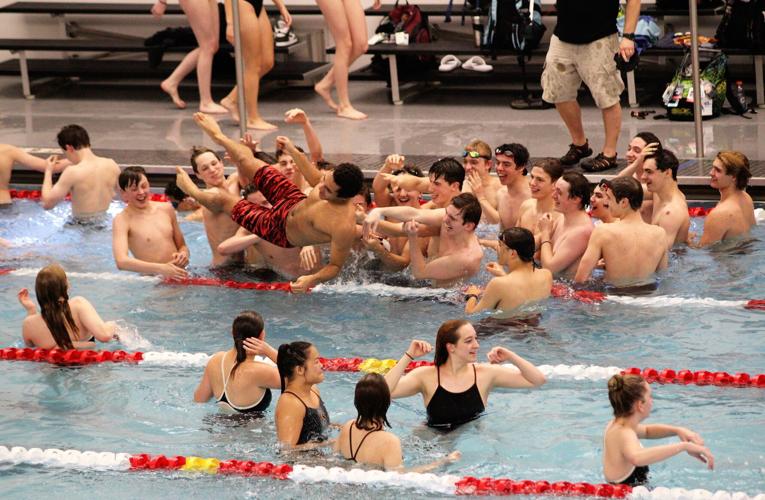 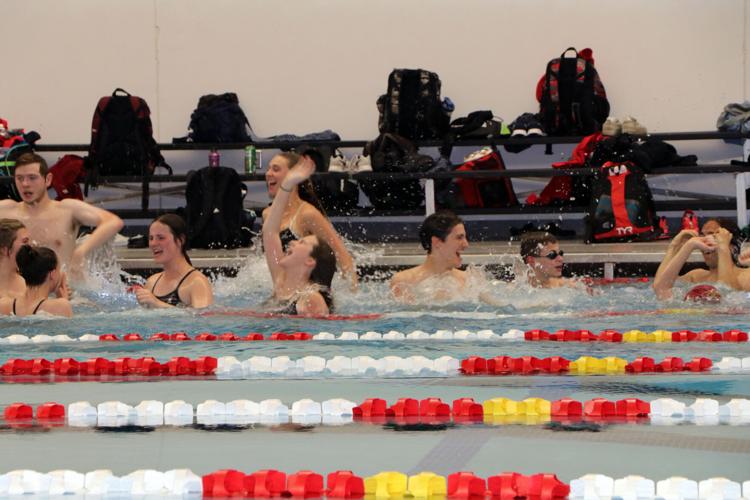 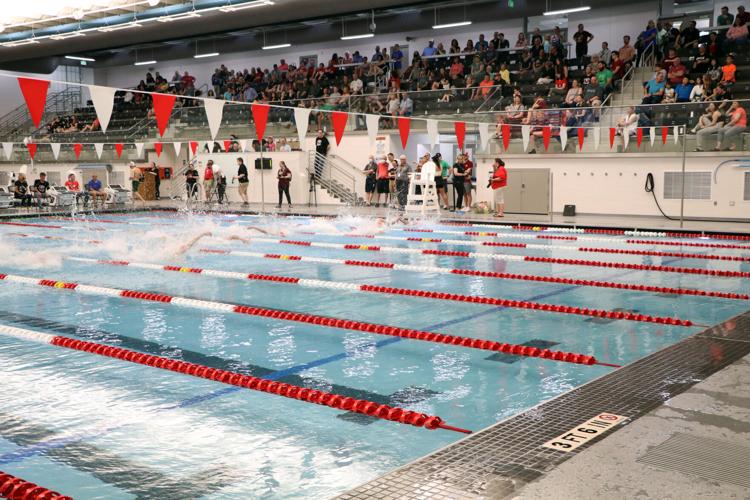 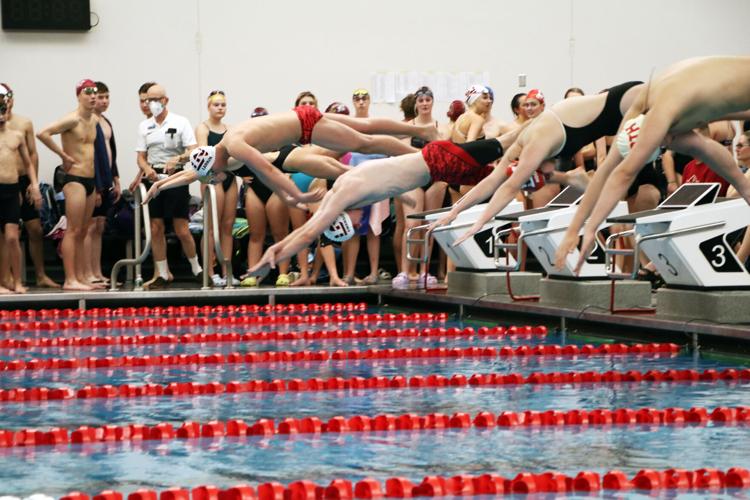 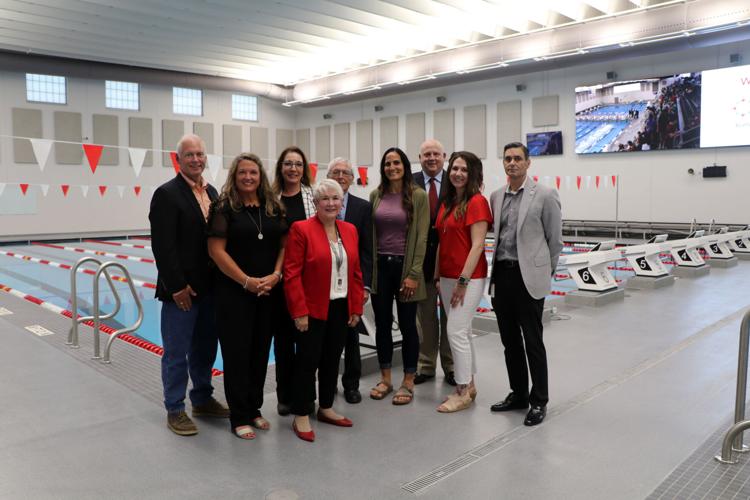 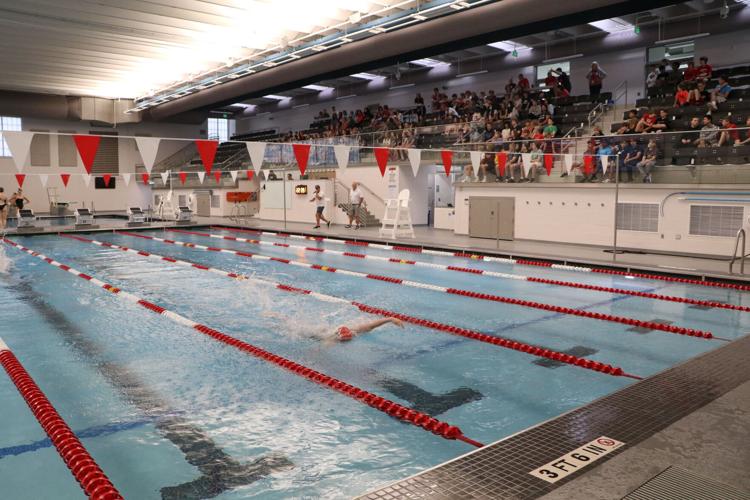 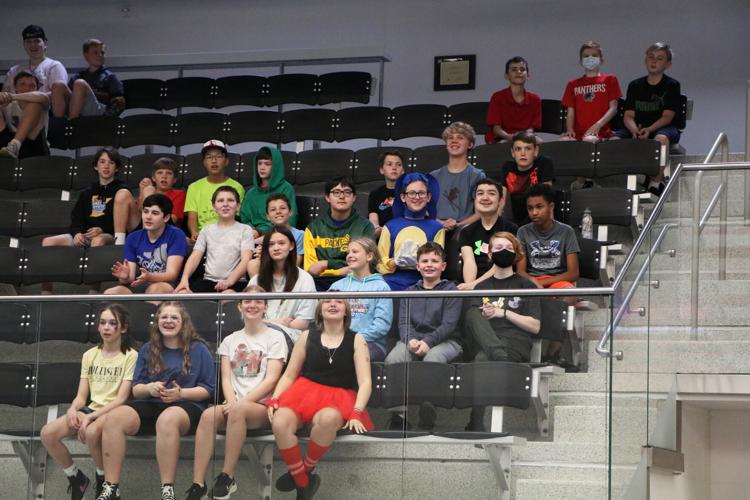 Lakeville North and Lakeville South high schools' swimmers and divers were the first to jump into the new pool at the Lakeville Area Schools Blanchard Aquatic Center during a Wednesday open house.

When the doors to Lakeville Area Schools Blanchard Aquatic Center opened for the first time to the public, gasps could be heard from guests during the open house Wednesday.

Attendees were greeted by not only a new pool and diving facility at Century Middle School, but an Olympic-sized message displayed on a video wall.

World record holder and Lakeville North alum Regan Smith greeted the 400-plus attendees with a recording from her training facility at Stanford University.

“I really want to congratulate you guys on this impressive accomplishment,” she said. “I know first-hand how difficult it can be to invest in and gain the support of people for an aquatic center.”

Smith swam one year for the Panthers before she exploded onto the world scene and medaled at the Tokyo Olympic games.

“As a former student of CMS, I want to thank each and every one of you who helped contribute to making these dreams into a reality. You should all be very proud, and I know that I am,” Smith said.

“This pool was designed and built by champions,” said Jay Blanchard, who co-owns Safety Signs in Lakeville with wife, Sue. They donated $300,000 to the project and are the namesakes of the facility. “The Lakeville area produces champions. We are proud to be part of this community.”

Sue Blanchard thanked everyone for their patience as the aquatic center was built.

“(This pool) was built with great care and planning so that all that enter are protected and kept safe,” Sue Blanchard said. “Let this pool be a place that all can gather and created the future champions of our community.”

After the speeches from school officials, exuberant high school swimmers and divers lined the side of the pool for the inaugural jump.

When Century Middle School was built in the late 90s, a pool was priced into its development. Construction costs exceeded the approved bond funding, so the district was unable to fund it, while McGuire and Kenwood Trail middle schools’ pools offered in-pool swimming curriculum to students.

“Minnesota has struggled to invest in its swimming infrastructure in the past,” Smith said. “We typically lag behind many other states in the country, and it’s very important to provide not only for the competitive swimming community but for the learn-to-swim community as well. May is Water Safety Month and as a lifelong swimmer this is very near and dear to my heart. Anything that we can do to provide more facilities like this will be very critical for the future of swimming.”

When District 194’s 2019 bond referendum passed, it began planning for a pool at CMS.

“We are thrilled about the learning opportunities this pool will bring for our students,” said School Board Chair Judy Keliher. “For the first time, students attending CMS will have swimming as part of their physical education classes. In the Land of Lakes, we see this as a critical learning opportunity for all Lakeville Area Schools students. (Additionally), special features make this pool accessible for students of all abilities.”

Lakeville North and Lakeville South will share Century as their home pool for practices and competition, and the district will avoid $6 million to $8 million in upgrades at Kenwood Trail, which would have included adding a diving well.

KTMS and MMS pools will turn their focus for training non-competitive teams.

“(While) we are excited to see our swim teams practice and compete in this state-of-the-art pool, we also see opportunities for educational classes for many people across our school community through Community Education and as facility-use opportunities,” Keliher said.

Emma Lind, 6, who attend the open house, thought the Aquatic Center was “cool.”

She said she wants to be a swimmer like her brothers (alumni Andrew and South swimmer Noah). Emma will take part in Community Education lessons this summer.

In an effort to boost the CMS pool to that of the regionally competitive facility, Superintendent Michael Baumann met with community members interested in fundraising to pay for items beyond what the bond money could fund.

The Blanchards and their extended family, including Kent and Paula (Guentzel) Peterson — were responsible for the initial donations. Former School Board Member Bob Erickson led the successful Buy A Seat Fundraiser. The Lions Club and many other contributors have total donations closing in on $600,000.

Fundraising has paid for Aquatic Center technology not found in any other high school in the U.S.

For the first time in company history, Mitsubishi built a video wall for competitive swimming on par with Mitsubishi’s installation in New York City’s Times Square.

Wayne Dodaro, a former Lakeville resident and sports technology expert who consults on major sports and arenas, worked with Mitsubishi and Swiss Timing/Omega, the official timekeeper of the Olympic Games, to build the state-of-the-art system.

Mitsubushi brought on MotionRocket, maker of sports video control systems for collegiate and pro sports, to interface and display real-time data. Never before have these three companies partnered for competitive swimming, and the result is the highest video resolution display in the state.

Fundraising also incorporated diving upgrades including a 3-meter board as well as a second 1-meter board.

“The new facility provides an opportunity for growth for the sport of diving,” said head Lakeville diving coach Derek Moulton. “For our more experienced divers, it is a pool that emulates more of a collegiate setting.

“For our newer and novice divers, this allows us to work on better technique and mechanics by utilizing the higher board and more deck space. It is a much safer pool with the increased depth.”

The Lions enhanced the concession area with an ice maker, refrigeration, prep tables, and an electronic display board with food and beverage selections.

U.S. Rep. Angie Craig, D-Prior Lake, coordinated the donation of U.S. flag that once flew over the U.S. Capitol to be displayed in the pool.

“This pool will be the centerpiece of high school pools in the country,” Krueger said.

Longtime South coach Rick Ringeisen said that none of this would have happened without the support of so many distinguished alumni. He said the legacy of producing champions in Lakeville will continue due to the fervent financial and emotional support of so many that have competed for Lakeville. He calls this the “Pool of Dreams.”

On a count of three, more than 100 current North and South athletes took their first jump into their new home pool during the open house.

“All of us waiting to jump in was surreal,” said North swimmer Payton Warns. “It was like a reunion. I can’t believe this is finally happening for my senior year. It’s such a beautiful facility … very modern … and all the details that went into it – it’s so amazing.”

The Open House included a high school exhibition meet. This was the first time that North and South boys and girls teams competed together, and nearly 30 years since divers have competed in the same home pool as swimmers.

South’s Porter Woodson was the first jump off the 3-meter board during warm up, which was met with wild applause.

“I feel spoiled since this is such a nice pool,” Woodson said.

North diver Alea Kroeten could already see the benefits for her team.

“I love the 3-meter,” she said. “(With three boards) more people can practice at the same time. MMS only has the one board making it much more difficult.”

Swimmers kicked things off with a 50 freestyle race, where reigning Minnesota state champion Max Kasal from South set the first pool record with a time of 21.79 seconds. New records flashed on the board throughout the swimming and diving meet.

The excitement over the new facility was seen on the students’ faces, as many of them didn’t want to leave when the meet was done.

The Aquatic Center is expected to drive tourism to Lakeville.

“We are looking forward to seeing the positive impact this pool will have on the greater community through its use as a competition facility,” Keliher said. “This is one of the top high school pools in the state, which will draw in teams from all over for tournaments. Bringing in audiences means they will be visiting local businesses while they are here – allowing them to experience the great communities we have here in Lakeville and in the surrounding areas across our district.”

The Aquatic Center is already fielding requests from greater Minnesota teams to use it.

“After many years of discussion, hard work and support, this amazing pool facility is finally a reality,” Keliher said. “On behalf of the Board of Education, I want to thank the Lakeville Area Schools community as this facility would not be made possible without their support.”

After competing in Budapest, Hungary, at the FINA World Championships at the end of June, Regan Smith hopes to be back in Lakeville to see her former school’s shining jewel.

“I am very excited to fly home after Worlds and get the opportunity to see this beautiful facility,” Smith said. “Again, congratulations to everyone!”