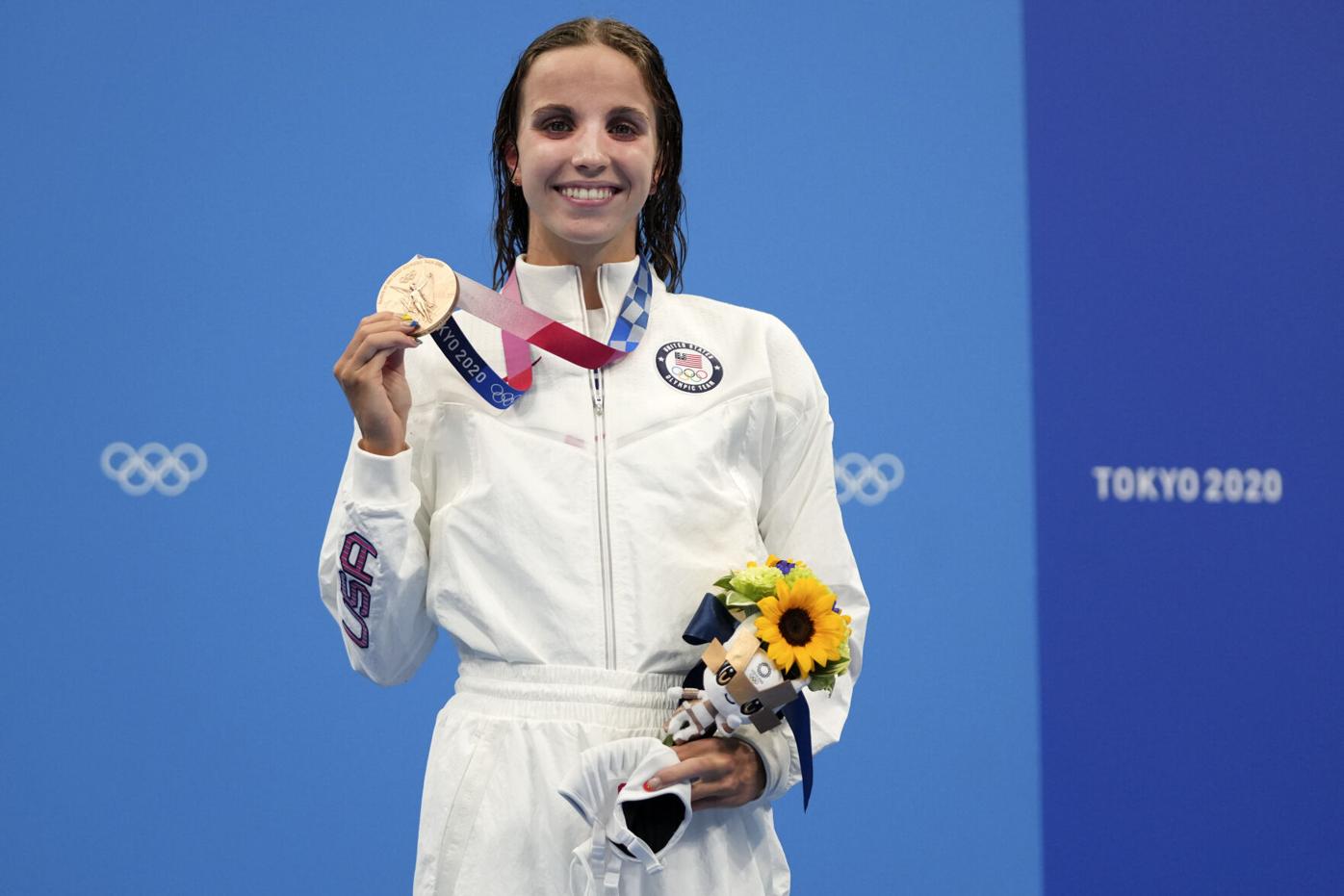 Regan Smith of the United States holds up her bronze medal for the women's 100-meter backstroke at the 2020 Summer Olympics in Tokyo. 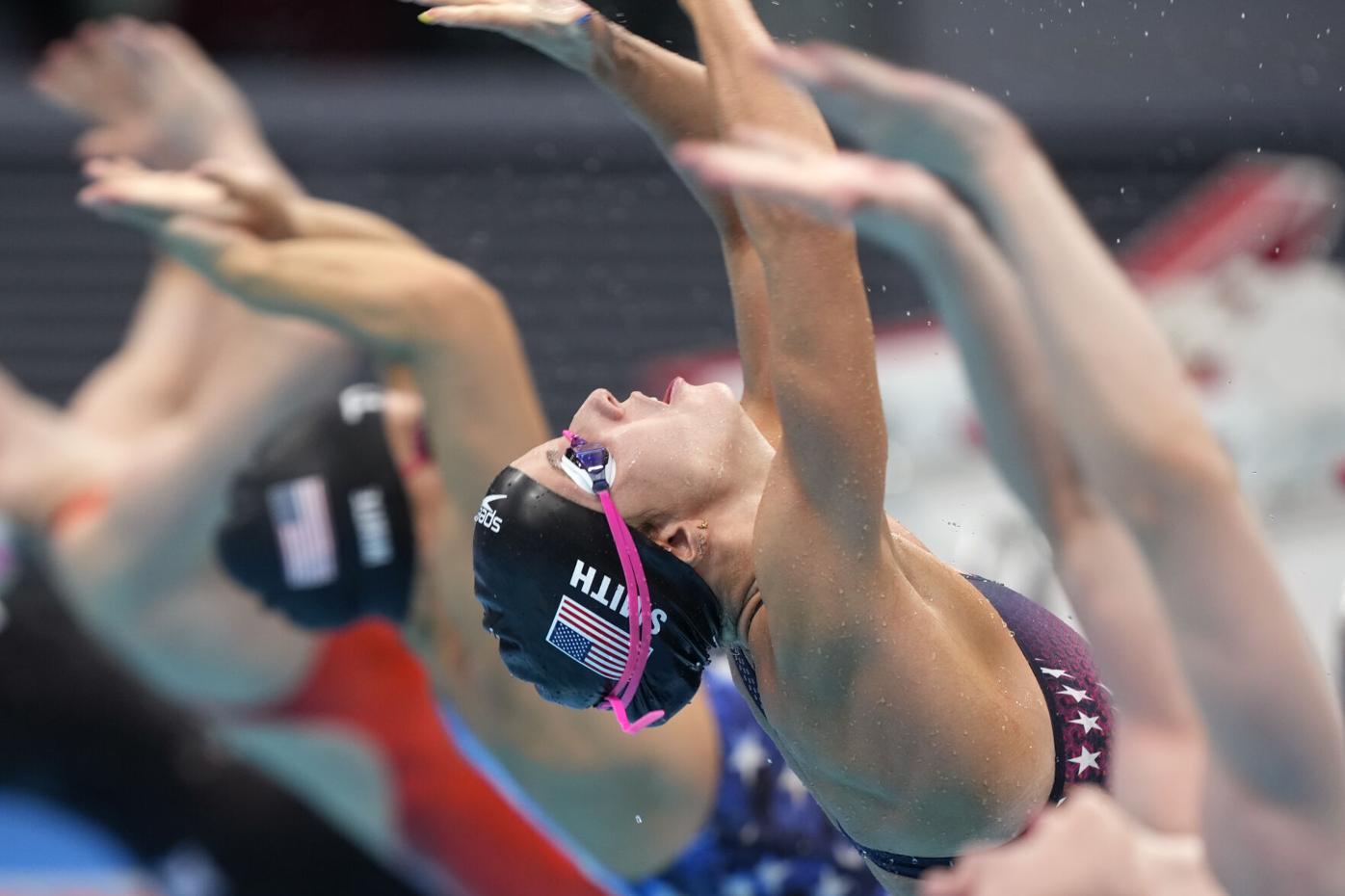 Regan Smith of Lakeville starts in a semifinal race in the Olympic women's 100-meter backstroke. Smith advanced to the finals and finished third to take the bronze medal. She lowered the Olympic 100 backstroke record twice during the preliminaries and semifinals. 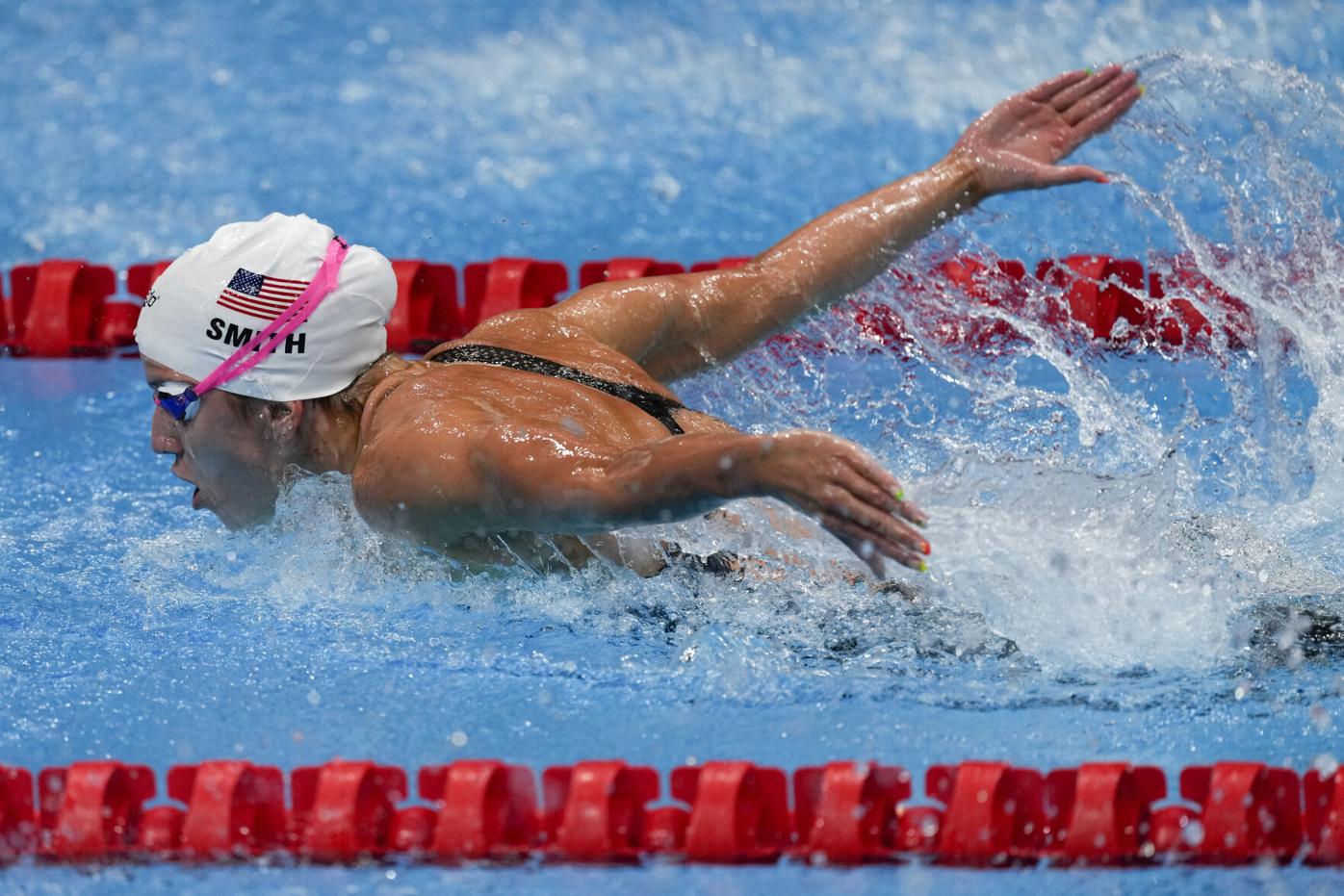 Regan Smith's Olympics aren't over. Less than 12 hours after winning a bronze medal in the women's 100-meter backstroke, the Lakeville native was back in the water for the 200 butterfly preliminaries. Smith had the fourth-fastest time in preliminaries and is favored to qualify for the final, which would be 9:28 p.m. Central Daylight Time on Wednesday.

Regan Smith of the United States holds up her bronze medal for the women's 100-meter backstroke at the 2020 Summer Olympics in Tokyo.

Regan Smith of Lakeville starts in a semifinal race in the Olympic women's 100-meter backstroke. Smith advanced to the finals and finished third to take the bronze medal. She lowered the Olympic 100 backstroke record twice during the preliminaries and semifinals.

Regan Smith's Olympics aren't over. Less than 12 hours after winning a bronze medal in the women's 100-meter backstroke, the Lakeville native was back in the water for the 200 butterfly preliminaries. Smith had the fourth-fastest time in preliminaries and is favored to qualify for the final, which would be 9:28 p.m. Central Daylight Time on Wednesday.

Everybody who attended an Olympic swimming watch party at Paul and Bonnie Smith’s Lakeville home Monday noticed the same thing when the Smiths’ daughter Regan emerged from the pool: an immense sense of relief.

In a career already filled with awards and accolades, she can add something new: an Olympic medal.

Swimming in one of the most competitive events of the Tokyo Games, Regan Smith on Monday finished third in the women’s 100-meter backstroke. It was the first of what could be as many as three Olympic finals for Smith, the 19-year-old Lakeville native who held the world record in the 100 backstroke for almost two years and broke the Olympic record twice during earlier rounds of the competition.

But expectations weighed heavily in the run-up to the Olympics. Two years ago Regan Smith established herself as an international swimming star, setting two backstroke records at the world championships and being part of a record-breaking medley relay.

She had reached such a fine edge in her training that by early 2020 Paul Smith said Regan and her coach, the Riptide Swim Team’s Mike Parratto, could predict her time in a given race within a couple tenths of a second.

The pandemic changed all that. Regan Smith was peaking, but now the Tokyo Olympics were going to be delayed by one year. It disrupted her training - she couldn’t swim in a long-course pool for nine months - slowed her times and chipped away at her confidence.

She worked her way back, winning the 100 backstroke at the U.S. Olympic Trials, but there were unknowns as she headed to Tokyo.

Paul Smith said Tuesday his daughter was pleased to earn a medal in the 100 backstroke. He was happy, too.

“Honestly, five days ago I wasn’t sure she would be on the podium in that race,” Paul Smith said. “All our communication has been through text-message exchanges, but I know she’s tremendously happy.”

The women’s 100 backstroke final featured the world record holder (Kaylee McKeown of Australia) and previous record holder (Smith) in adjacent lanes. McKeown, Smith and Canada’s Kylie Masse reached the 50-meter mark nearly even before McKeown pulled away in the final half of the race to win in 57.47 seconds. That time also is the Olympic record and marked the fifth time the record was lowered during this year’s Games.

Masse finished in 57.72 to win the silver. Smith’s bronze-medal time was 58.05, one of the best of her career and the 13th fastest in history.

“I was right off of my time from semis and prelims, and that is one of my best times ever, so I really went out there and gave it my all,” Smith said following Monday’s race. “It was a super-stacked heat, so the fact that I came away with a medal, I really can’t ask for much more. I’m super, super pleased with it.”

In the final, Smith ranked fourth of the eight swimmers in “reaction time,” defined as the time between the start sound and when the swimmer’s feet leave the block. She was less than one-tenth of a second behind McKeown and Masse off the block, and that likely didn’t factor in the outcome.

“She wanted to be under 58 in the final, so truthfully it was a B-plus race for her,” Paul Smith said. “A good race, not terrible at all. But of course it’s probably going to take an A-plus race to win the gold medal.”

Smith’s personal record in the 100 backstroke is 57.57 seconds, which she swam in the 2019 world championships in South Korea. The current world record is 57.45, swam by McKeown in the Australian Olympic Trials in June.

The Olympic backstroke record changed hands four times during the preliminaries and semifinals, with Smith responsible for two of those. Masse was first to break it in the fourth heat of the preliminaries. Smith, swimming in the fifth heat Sunday, then lowered it to 57.96. McKeown swam 57.88 in the sixth heat of preliminaries to take ownership of the record until Smith took it back by swimming 57.86 in the semifinals.

By the time the Olympics finally arrived, Paul Smith said his daughter was almost back to her early 2020 form. “I talked with (Parratto) and he said, ‘Paul, we needed four to six more weeks of high-level training to get her back where she wanted to be. We just ran out of time.’”

Regan Smith’s Olympics are far from over. The 100 backstroke final was Tuesday morning Japan time and Monday night Central Daylight Time. Smith was back in the pool Tuesday night in Japan (early Tuesday morning in the U.S.) for her next event, the 200 butterfly. She had the fourth-fastest time (2 minutes, 8.46 seconds) in preliminaries and was fourth fastest. Smith swam 2:06.64 in Tuesday night’s semifinals, also fourth fastest. The finals are scheduled Wednesday night in the U.S. and took place after this edition went to press.

The backstroke is Smith’s bread and butter, but she also has had strong results in butterfly, which Paul Smith said Regan has always regarded as a fun event. With the pressure ratcheted down, Paul Smith said “it would not surprise me at all” if Regan medaled in the butterfly race.

Her final event could be the women’s 4x100 medley relay. The U.S. lineup for that event hadn’t been announced as of Wednesday morning but it’s likely to include Smith, who swam the backstroke leg when the U.S. set the world record in the relay two years ago in South Korea. Smith swam her personal-record 57.57 on the first leg of that relay, with the time also recognized as the world backstroke record.

The 4x100 medley relay preliminaries will be Friday morning in the U.S., with the final at 9:15 p.m. CDT Saturday.

Paul Smith said teams typically use men in the backstroke leg of the mixed medley relay, although it was possible Regan could swim that leg in the preliminaries.