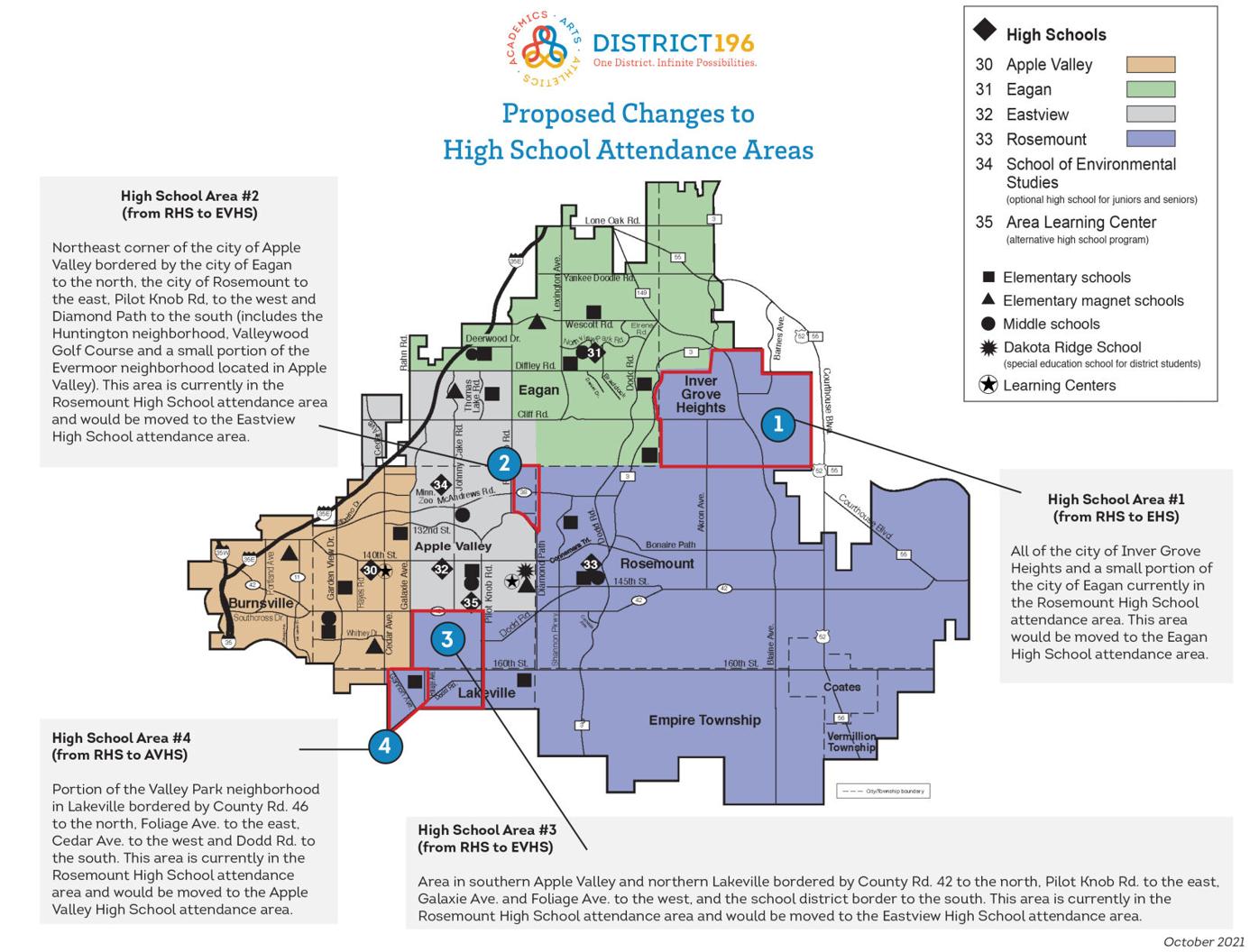 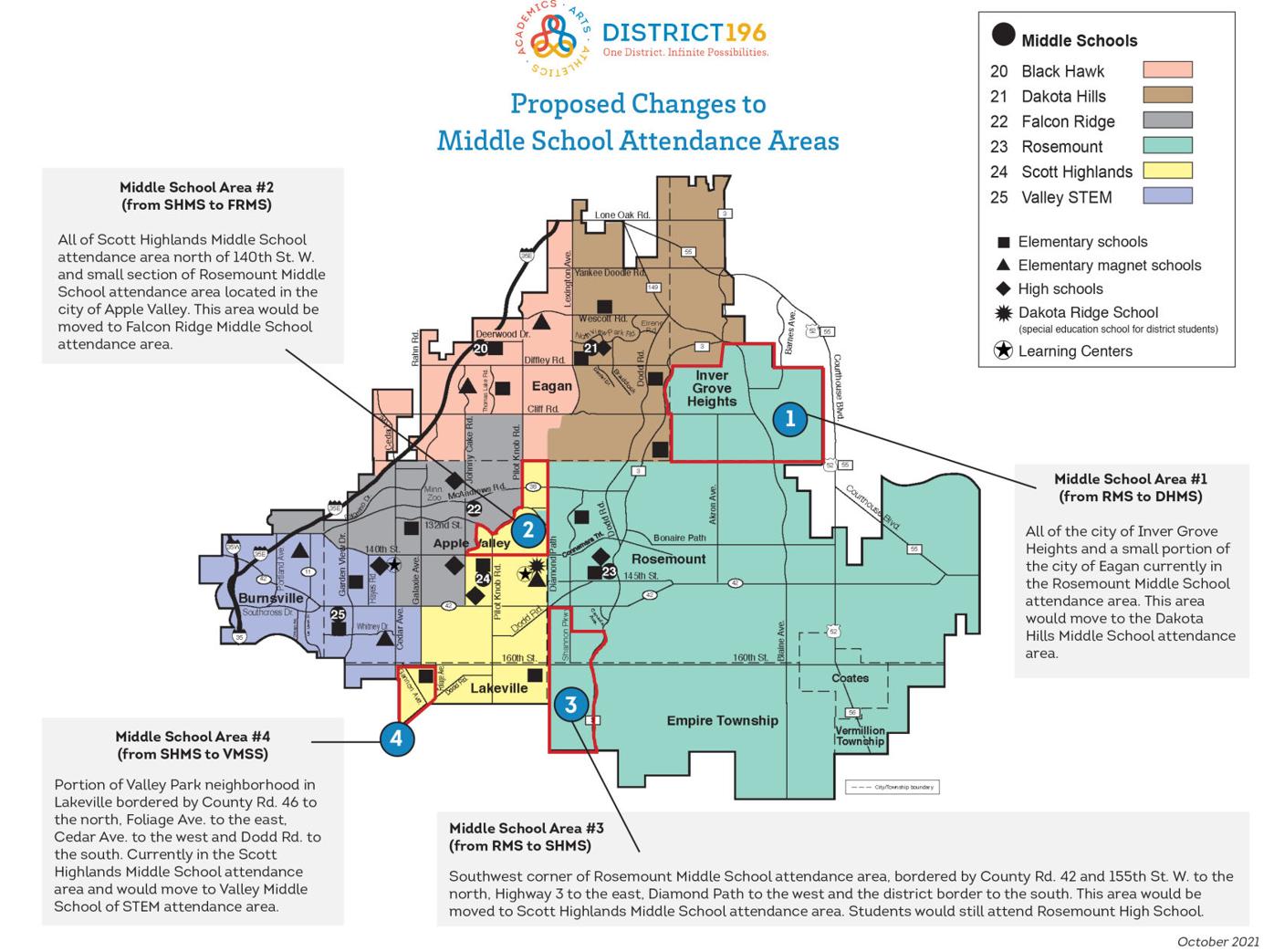 The district said in a news release Oct. 11 that the adjustments are meant to alleviate current and projected overcrowding at the two Rosemount schools by fully using existing space at other district schools. The changes would begin next year and with a phased implementation by giving families the choice to attend their new attendance area school or finish the level at the school they’re currently going to.

The district sent a letter Oct. 7 to families with children enrolled in District 196 living in the areas identified for changes. The letter included maps to explain the preliminary recommendations and invitations to attend one of the three same informational meetings scheduled for:

Families are invited to complete an online form at www.District196.org/AttendanceInput to provide written feedback on the proposed recommendations. The form will be open through Oct. 22.

The preliminary recommendations for middle school and high school attendance-area adjustments include the following areas:

• All of Inver Grove Heights and a small portion of Eagan currently in the Rosemount High and Rosemount Middle attendance areas would move to Dakota Hills Middle and Eagan High (Area No.1 on high school map and middle school map).

• The northeast corner of the city of Apple Valley in the Scott Highlands/Rosemount Middle and Rosemount High attendance areas, including the Huntington neighborhood, Valleywood Golf Course and a small portion of the Evermoor neighborhood in Apple Valley, would move to Falcon Ridge Middle and Eastview High (Area No.2 on high school map and part of Area No. 2 on middle school map).

• The remaining portion of the Scott Highlands attendance area north of 140th Street would also move to Falcon Ridge and would remain at Eastview High (other part of Area No. 2 on middle school map).

• The southwest corner of the city of Rosemount and northwest corner of Empire Township would move from the Rosemount Middle attendance area to Scott Highlands and would remain at Rosemount High. The area is bordered by County Road 42 and 155th Street West to the north, Highway 3 to the east, Diamond Path to the west and the district border to the south (Area No. 3 on middle school map).

• The far southwest corner of the Scott Highlands Middle and Rosemount High attendance areas in the city of Lakeville/Valley Park neighborhood would move to Valley Middle and Apple Valley High. The area is bordered by County Road 46 to the north, Foliage Avenue to the east, Cedar Avenue to the west and Dodd Road to the south (Area No. 4 on high school map and middle school map).

• An adjacent area in the southwest corner of the Rosemount High attendance area would move to Eastview High and remain in the Scott Highlands Middle attendance area (Area No. 3 on high school map).

When changes would start

Families would be asked to make their enrollment choice for the 2022-23 school year in January, with these choice options:

The sibling preference would also apply to students in other grades. For example, a current seventh grade student with a sibling in ninth grade could attend their current attendance-area high school when they reach ninth grade and their sibling is in 11th grade at that same school. However, transportation would be provided only through the 2025-26 school year, their junior year.

District leaders first started talking about attendance-area adjustments in spring 2020, but delayed the process until now in order to focus efforts on responding to the COVID-19 pandemic. Earlier this fall, the district announced plans to restart the review of middle school and high school attendance areas. The attendance-area recommendations are part of a larger process to address the district’s facilities and equipment needs for the next 10-plus years. A committee of district and school leaders has been meeting on that since last spring.

Early in 2020, prior to the start of the pandemic in Minnesota, former State Demographer Hazel Reinhardt conducted an enrollment study for the district. Looking 10 years into the future, Reinhardt’s high-end projections show total district enrollment growing by as many as 2,500 students by the 2029-30 school year. This would exceed current building capacity by as many as 2,300 students, including 1,300 of them at the high school level. This year’s enrollment has rebounded to near pre-pandemic numbers and is projected to continue to grow, with almost all of the new growth taking place in the southeastern part of the district, within the current Rosemount High attendance area.

Rosemount High has capacity for approximately 2,115 students and current enrollment is 2,445. This year’s freshman class at Rosemount is more than 675 students and the school’s total enrollment is projected to grow to 2,660 in the next three years, 545 over current capacity.

Rosemount Middle has capacity for approximately 1,180 students and current enrollment is 1,220. Enrollment is projected to grow to 1,335 students in the next three years, 155 over current capacity.